Cyclocross is finally here and we are starting off the season by checking off the top item on our ultimate wishlist: A full on SVENNESS with SVEN. If that’s why you are here and these words are just getting in the way, I don’t blame you. Hang in there for a handful of sentences and you are at the video. But before you get there, allow me to give you the quick and dirty intro: While at Cross Vegas last Wednesday, we had an opportunity to sit down with Sven Nys and watch clips of races together. He was gracious enough to take the time, hours before winning the Cross Vegas men’s pro race, to explain his technique, strategy and mindset for dealing with different cyclocross situations. As you will see, the insight he gives is something special. I want to thank Trek Bikes and Matt Shriver for helping make this happen, Bruce Buckley for filming and stage managing, and Dan Tille of Fulcrum Coaching for being my wing man. Also a big thanks to Brook Watts and Cross Vegas. Okay, here’s the video. If you are interested in how this interview came to be, there are many words on that below the video. Thanks for watching.

The rest of the story. I had several people ask how this extended interview happened.  Frankly, it’s all still a bit surreal, but I will try and lay it out for you. Here’s the backstory:

I’m going to be perfectly honest with you. As I was flying to Las Vegas for Interbike and CrossVegas I was not confident that I’d get the chance to talk to Sven Nys. It’s Vegas so let’s put this into odds. I was giving myself about 50 to 1 odds that an interview would take place. Even less than that for the type of interview I wanted to do. But I pulled out my laptop and spent most of the flight preparing, just in case I did, in fact, beat the odds. Vegas.

In April of this year I flew to Belgium to ride the cobbles, take in Flanders and Paris Roubaix and hang out with my buddies and Skills Drills and Bellyaches co-collaborators, Dan Tille and Rusty Williford. Before heading to Belgium, a friend of mine who works with the Trek Factory Racing Pro Mountainbike team made some introductions and we were able to tour the TFR Service Course. He also reached out to see if Sven was in town and available for an interview. It turned out that Nys left the day we arrived, to train in Mallorca for the upcoming MTB season. In retrospect, I’m glad that interview didn’t happen because I hadn’t yet stumbled onto the SVENNESS with SVEN idea. An April interview, while an awesome experience, would’ve probably been me asking run-of-the-mill questions and getting run-of-the-mill answers. Thank goodness for missed connections.

Fast forward several months and Dan Tille and I are planning our trip to Vegas for Interbike and Cross Vegas and he is constantly badgering me about meeting Sven. “Missed him in Belgium, now’s our chance to get him in the States.” “I know this is self-serving, Bill, but I really want to meet the guy …” “Fine, Dan … I’ll try again …” Don’t tell Tille, but before the badgering began I had already reached out to Matt Shriver, who has worked closely with Sven since he started riding Trek bikes and was instrumental in forming the Trek/Sven relationship. Matt told me “I’ll see what I can do.” That was all I really heard from him. Nothing more firm then an “I’ll try.” That’s what I was basing my odds on. C’mon Vegas.

Along with Dan, my good friend and photographer for Skills Drills and Bellyaches, Bruce Buckley, also made the trip west. We headed out for Cross Vegas on Wednesday afternoon to set up a booth showing off our book and hopefully to sell some t-shirts. After getting set up we started to wander around the venue. At around 7pm, Dan and I were walking around the rider RVs and chatting with some folks. We ended up at the Trek compound talking to Mark Legg about pretty much anything and everything. Somewhere in the middle of an anecdote about Mark getting cut off in traffic and thinking he was still in Europe, someone calls me from across the tent: “Hey, if you want to talk to him, he has time RIGHT NOW …” “Oh, hey Matt … awesome. Thanks!” (At least that’s what I said on the outside. On the inside it was more like “GAHHHHHHH … I’m so not prepared.”) Logistically, what I wanted to do was pretty much impossible RIGHT NOW. So I sent Dan sprinting back to our table to get my laptop and iPad and grabbed my phone to call Bruce who was shooting the USAC amateur races … and then to text Bruce …. and call again … and text again …. no answer … no answer … no answer … so much near panic happening at this point. Stay cool. Vegas.

Bruce still hasn’t arrived when Sven comes out of the RV and starts walking towards me, ready to go. I had explained to the other folks with Sven what I wanted to do … show clips and have him walk us through what is going on, a Sven on SVENNESS of sorts … and they said he’d be fine with it. So I assumed he knew what he was getting into. As he is walking over, I’m quickly promoting Dan to the media varsity team, handing him my camera, and quickly explaining what we need to do to shoot this. (At this point, if this worked out it was going to be a miracle. Not sure where to film, no chairs, no idea on how to proceed … crap.) And then it happened. Right before Sven got to me, I swear to you he was putting out his hand to shake mine, one of his guys grabbed him to go talk to somebody else. Thank goodness. A respite. Beat the odds. Just about that time Bruce shows up and things are starting to look up. We have time to figure out how to shoot, if the laptop or the ipad is going to be better to show the clips to Sven, and where we could set up. It also dawned on me that I should have a SVENNESS shirt for Sven. So I sent Dan on his second wind sprint of the day back to the booth to look for some small t-shirts.

Meanwhile, Bruce and I were testing out different spots, trying to figure out the quietest spot to shoot (you’d be amazed at how many generators are running at a pro-level bike race) and coming up with the semblance of a plan. Originally, we were going to use a couple camp chairs that were outside of Katie Compton’s trailer. Not ideal, but it was really all we had to go with. We did some test shots, figured out angles, and then waited. It looked like RIGHT NOW may have passed us by as Sven had gone back to the trailer and we were left wondering if the interview was ever going to happen. Dan had also reappeared with only medium shirts. “Did you check the bag under the table” “no …” “I swear they are in there, Dan.” Wind sprint number 3.

About ten minutes later, Sven came back out, donned a Velo jersey for some photos of him posing with his Trek Boone, and then made his way over to us. At about this same time, these two wonderful chairs had miraculously appeared in Katie Compton’s tent. They were perfect, and … Katie was sitting in one of them. As I’m beating myself up inside over having to ask the World Cup winner and multiple U.S. National Champion, who is a couple hours away from racing, if I can have her chair, she let me off the hook. Seemingly reading my mind she stood up and calmly said, “Hey, you need two chairs to talk to the man.” “One million thank yous Katie Fn Compton … one million thank yous.”

Sven comes over, shakes our hands, we chat for a second about what I want to do. He is super cool with it from the get go. I mention it will sort of be like a SVENNESS video and he says … “I’d really like one of those shirts …” Hearing that, I turn to Dan, who is still cooling down from his sprint workout, and he gives me this look. “Dude, I tore the booth apart … all you have are mediums. I swear.” Sven is more than happy to take the medium (he later wore it after the race and tweeted about doing a SVENNESS). Vegas. 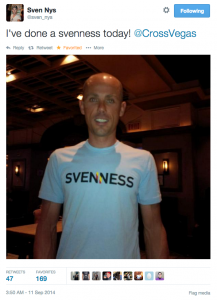 We finally sit down for the interview and I’m still trying to get my bearings. Fumble my way through a sloppy intro and Bruce stops us about 30 seconds in: “sorry guys, I just realized the mic isn’t on. We need to start again.” I cannot thank Bruce enough for two things (1) realizing I had left the mic off and saving what would’ve been a soundless disaster, and (2) giving me the opportunity to reset and start again. I still bumble around here and there, but hey, I know nobody’s watching me anyway. So it’s all good.

And from there it was cake. Sven Nys could not have been better. As you will see, or have already seen, he is a great teacher and the definition of pro. He’s able to describe everything that is going on in the race. From why he’s doing something, what his strategy is, to his mental state when things don’t go to plan. This truly is a master class in every way. He could’ve simply said “that’s just the way I do it.” But bar one situation (which he still goes on to explain) that isn’t even close to the case. I hope you guys enjoy watching it as much as we enjoyed the experience of putting it together.

We look at several clips from last year’s European racing season and SVENNESS episodes, including the Superprestige race at Ruddervoorde, the GP Mario De Clercq, and the Belgian National Championship. Video clips are via Vier and Sporza. Cross Vegas footage was shot by me.

Cross is here. Let’s do this.

25 thoughts on “SVENNESS with SVEN”