Before saying anything about the weather conditions of a race, it would be wise to actually check the weather. Looking at the profile of today’s stage, one would think that yes, this is a straightforward sprint stage, but that’s not quite how things unfolded.

The weather in Utrecht was hot and sunny, making for excellent departure conditions. I spent the morning hanging around rider sign in, and chilling hard with fans. The actual act of signing in is rather uneventful… the Giro has this fantastic glass board that the riders sign: 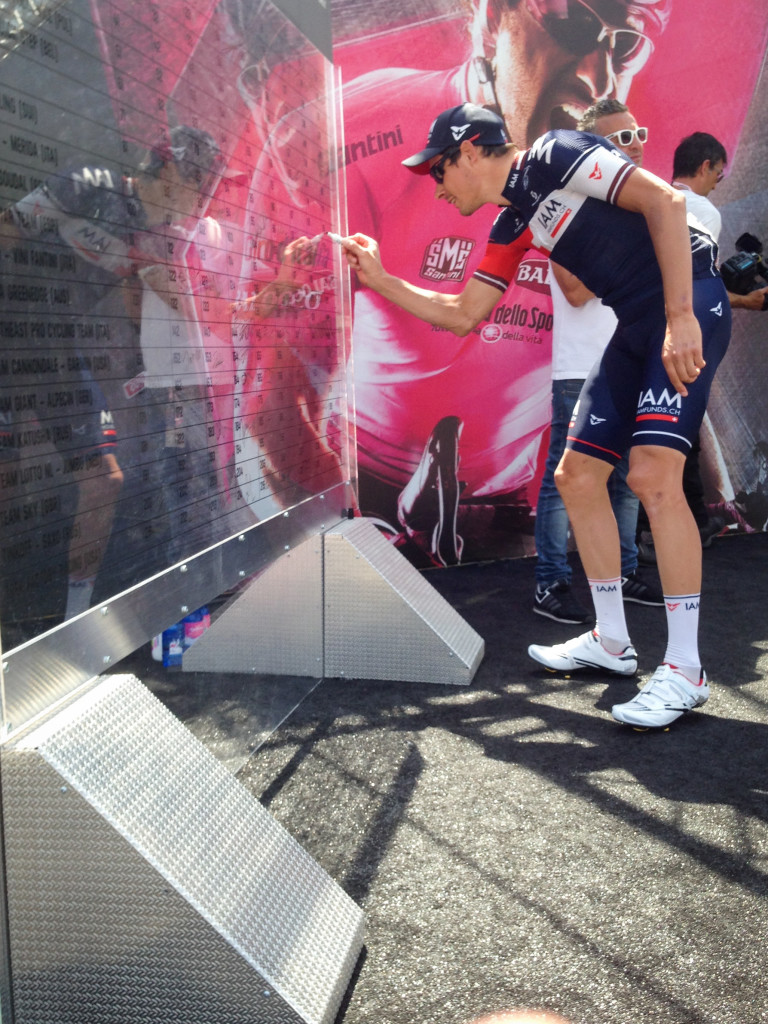 The Tour should then have something better, with holograms and lasers or something? Nope. Just a podium: 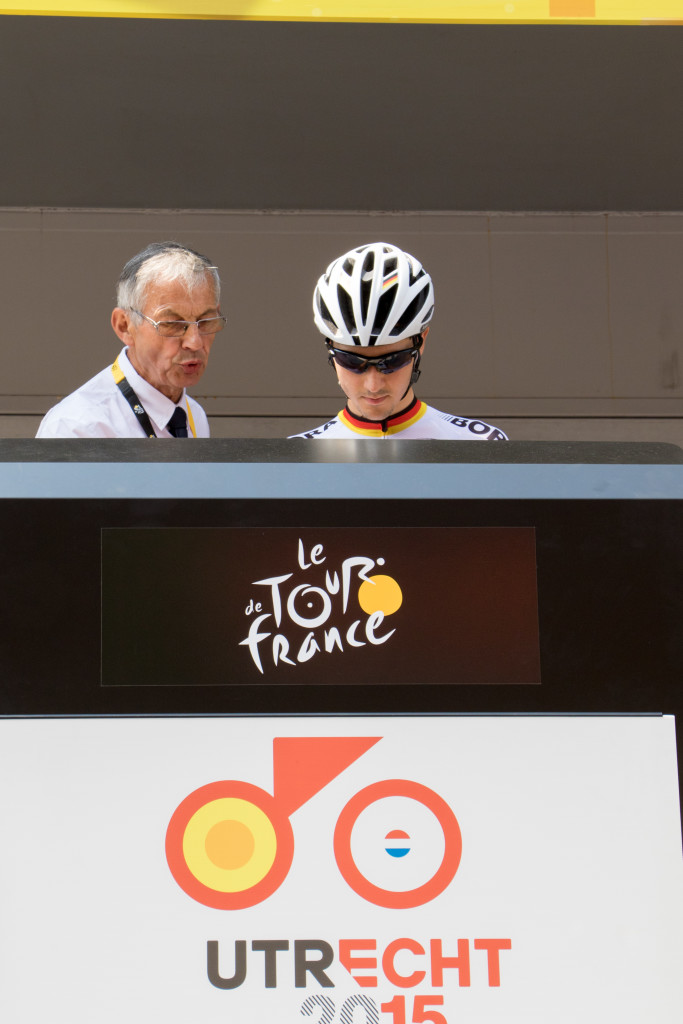 It’s supposedly a digital sign in, but I had a glance at it. I think it’s a glorified iPad. Come on, Le Tour. Lasers and holograms, please.

But rider sign in does offer a chance to see every rider one by on, and is a great time for fans to get signatures from their favorites. IF they get their spot early enough. These Colombians had clearly been there all morning, but were absolutely the most animated fans, and took home more autographs than I can count. 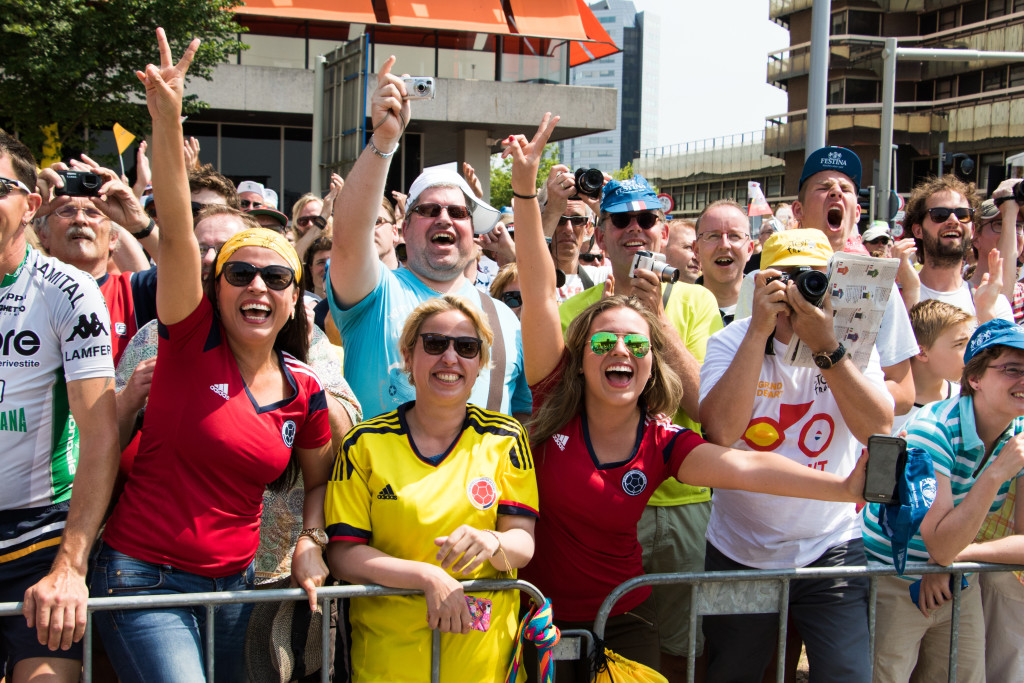 By quick count, I put 6 Colombians at this year’s tour. And if you’re these guys and chanting “CO-LOM-BIA! CO-LOM-BIA!,” you’ll get a signature from all of them.

Much like the Colombians, this group of Canadians had clearly been there all morning, but were always STOKED to have someone come over to them.

Elsewhere along the barriers …

Michal Kwiatkowski (Etixx-Quickstep) was on hand for autographs as well, and man, did he do it right: 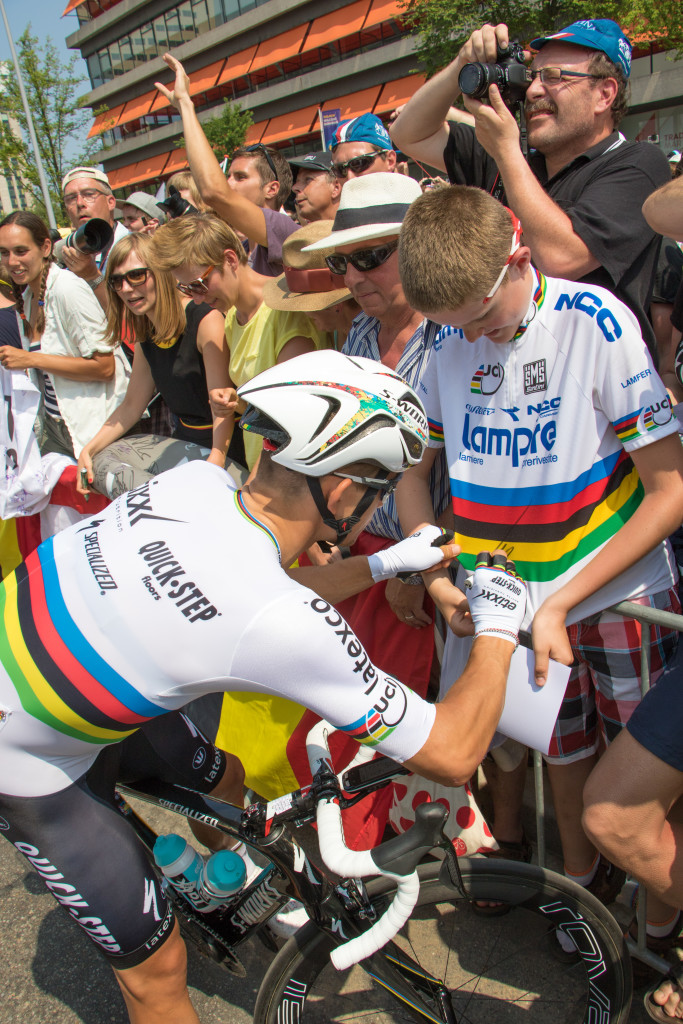 Some riders were a little less crowd friendly. Contador signed a few autographs, but never lost his game face. I didn’t see Sagan sign any today, and he was strictly business. But it’s understandable. The Tour is long, today would be tough, and they’ve got a job to do. 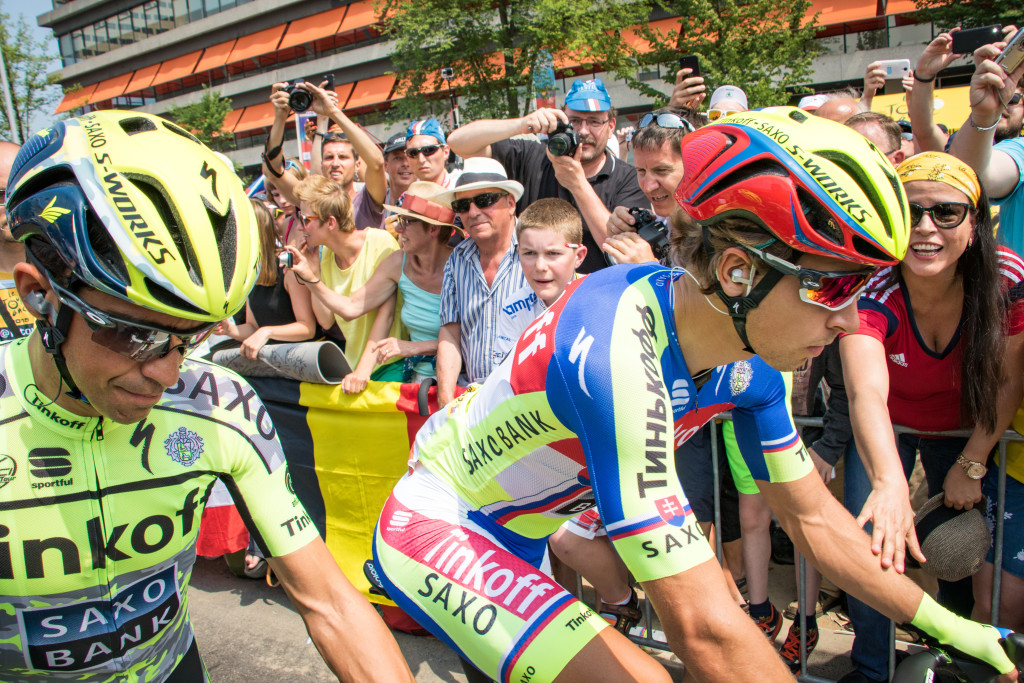 “No smiling” is obviously not a directive from Tinkov though. Other Tinkoff-Saxo boys were chillin hard, and seemed pretty pleased about it. Paolini could lighten up, I guess. 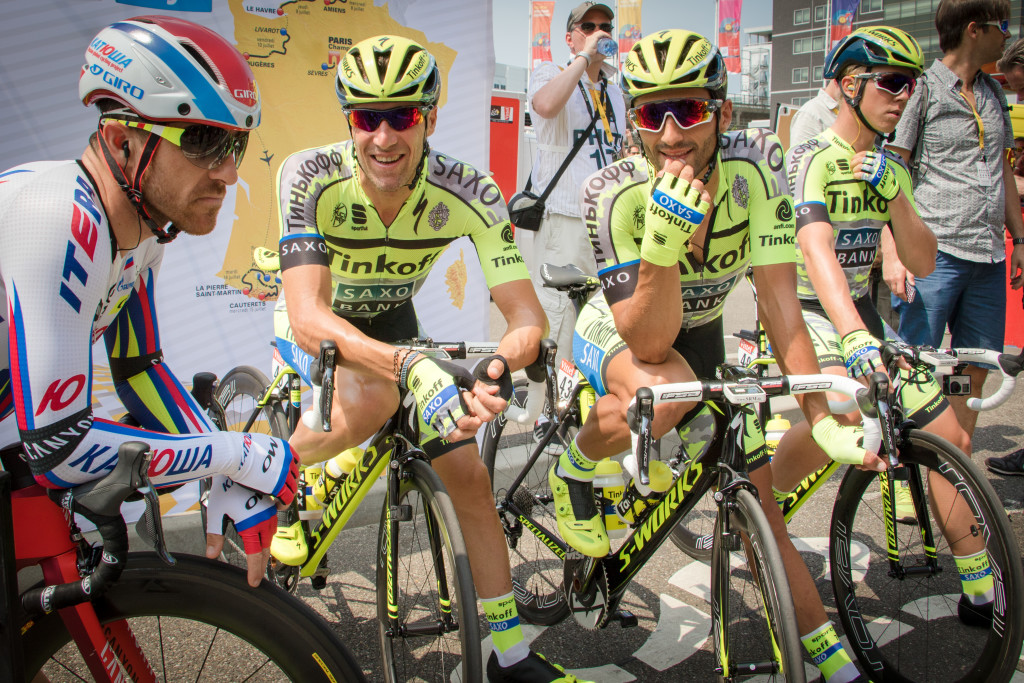 Mark Cavendish (Etixx-Quickstep) was briefly smiley when talking to someone … 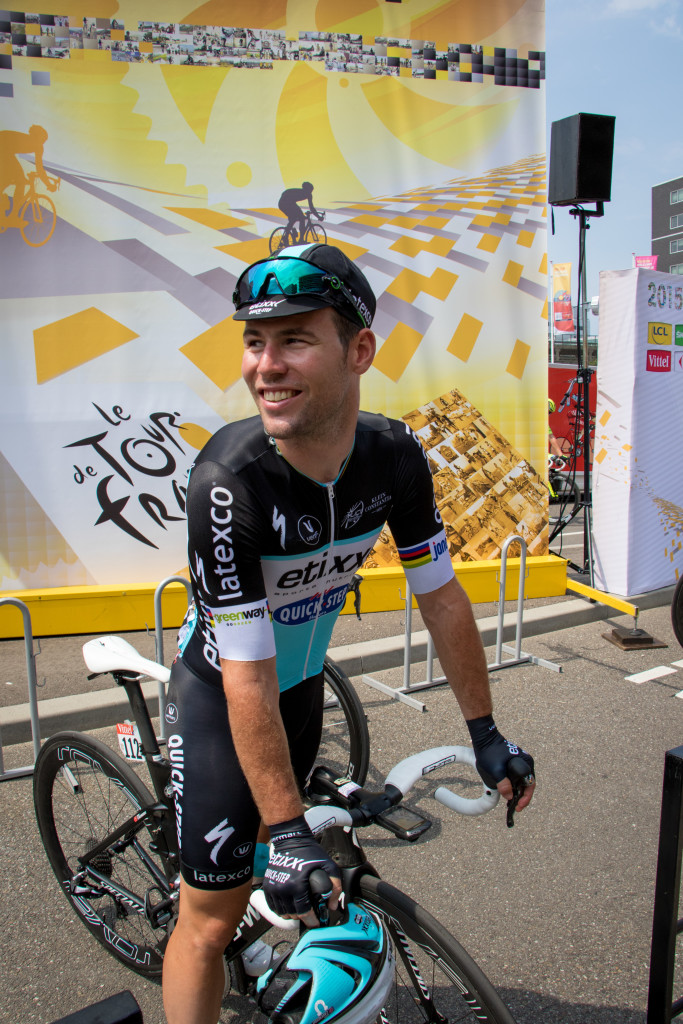 … but much like Kanye at a basketball game, as soon as he realized media were circling him to get pictures he immediately reverted back to quiet and brooding. 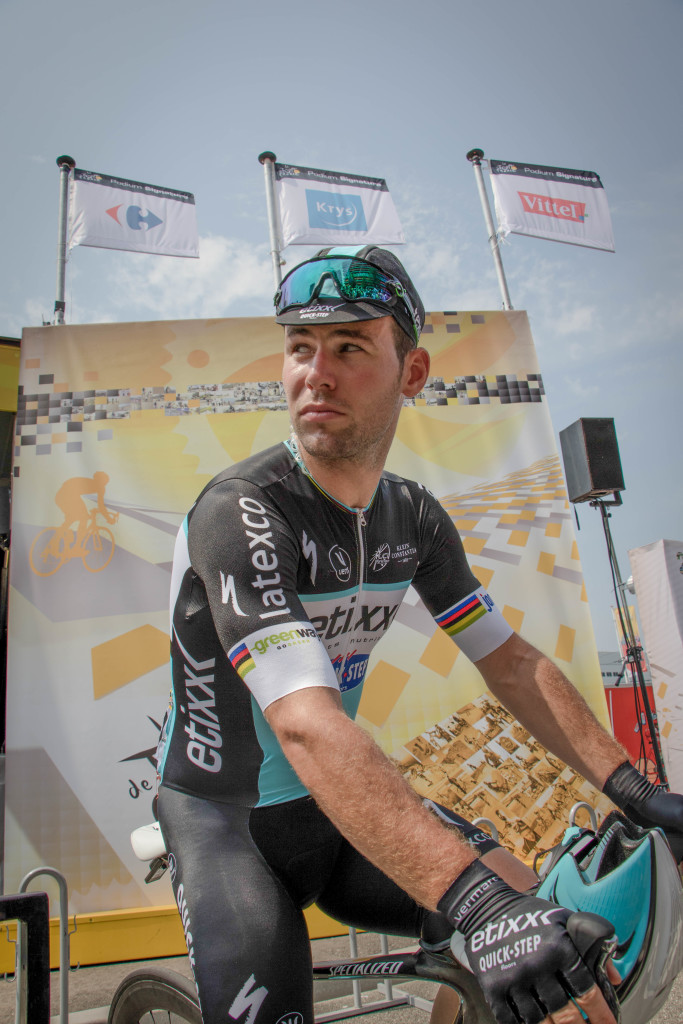 I’ve no idea when I shot this, but I seem to have a pretty great ‘selfie’ of Roy Curvers (Giant-Alpecin), as well! Thanks Roy! 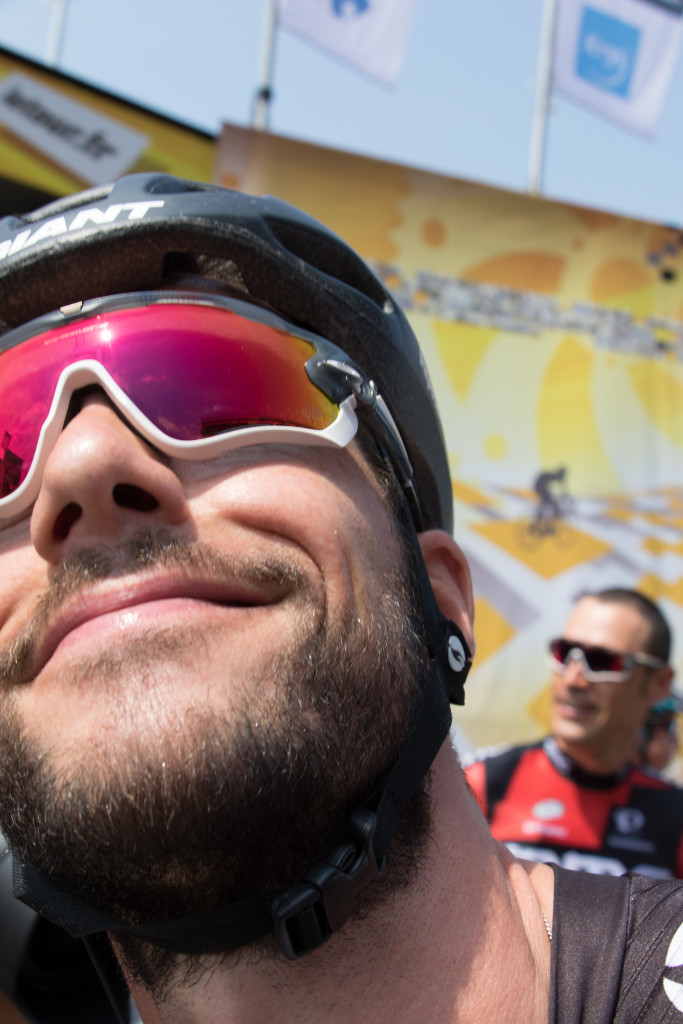 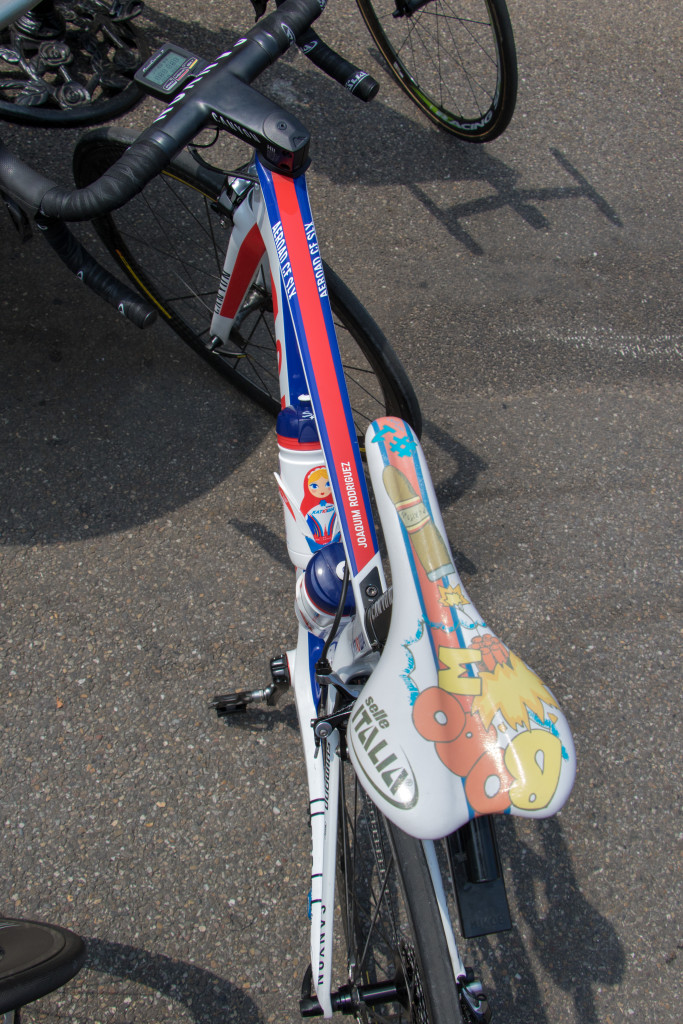 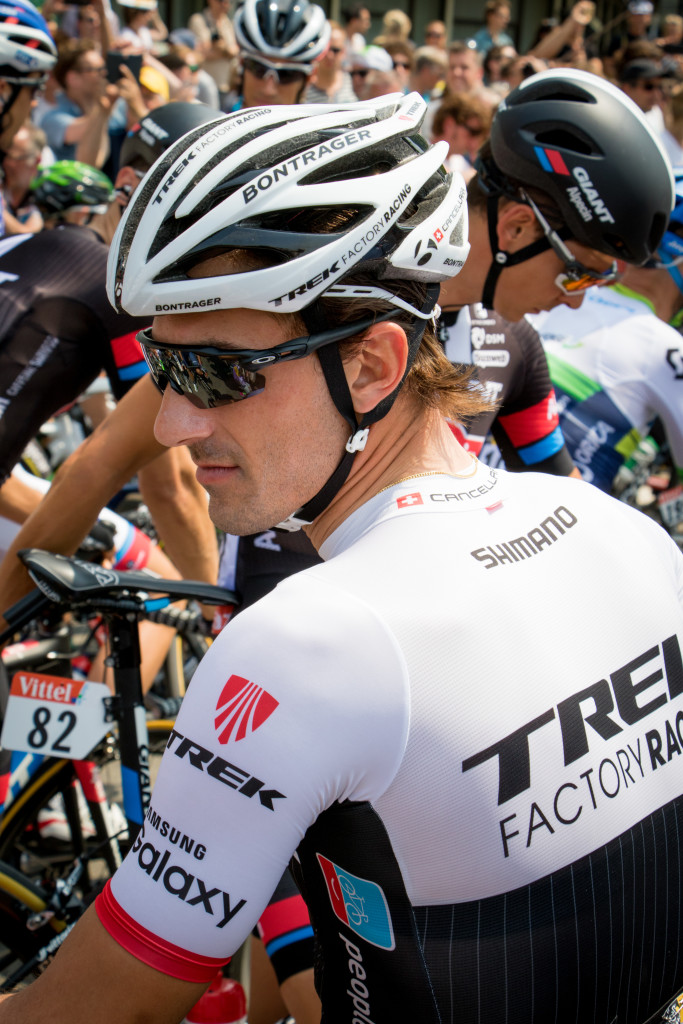 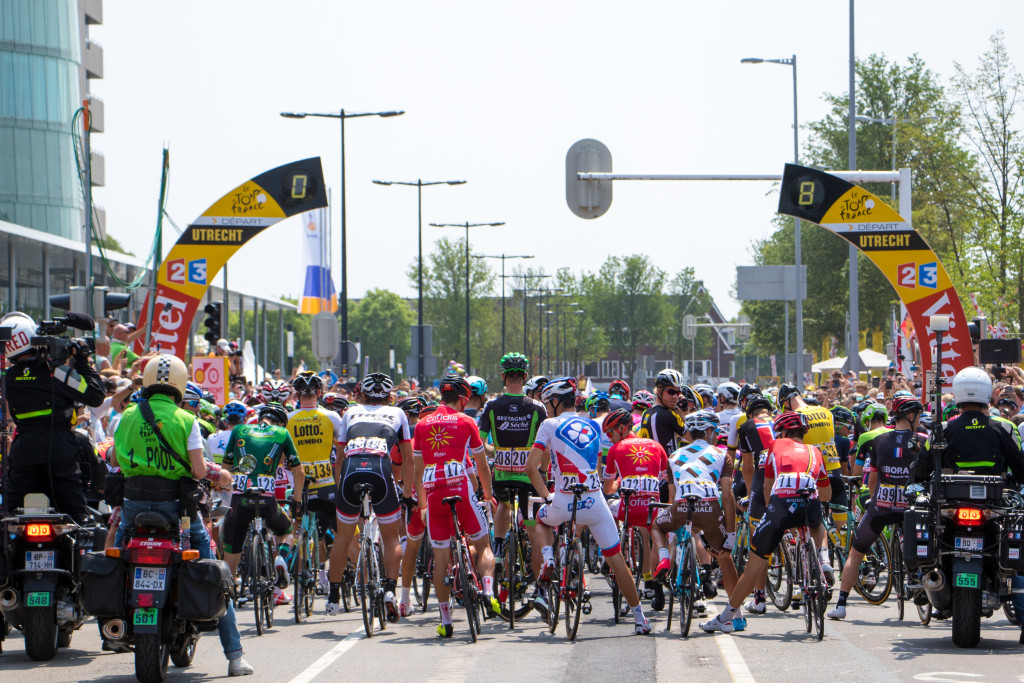 As the race traveled southwest towards Zeeland, conditions quickly deteriorated. Apart from the early morning breakaway, chilly wind and rain split the rest of the bunch into two groups. For GC contenders, Froome, Van Garderen, Uran Uran, and Contador made the split. For possible stage winners, Cavendish, Greipel, and Sagan found themselves in the front group, each with a couple teammates for support. At the finish, Renshaw and Cavendish seemed to go a bit too early with Cav only getting 4th, and letting Andre Greipel take the win, barely ahead of Peter Sagan. 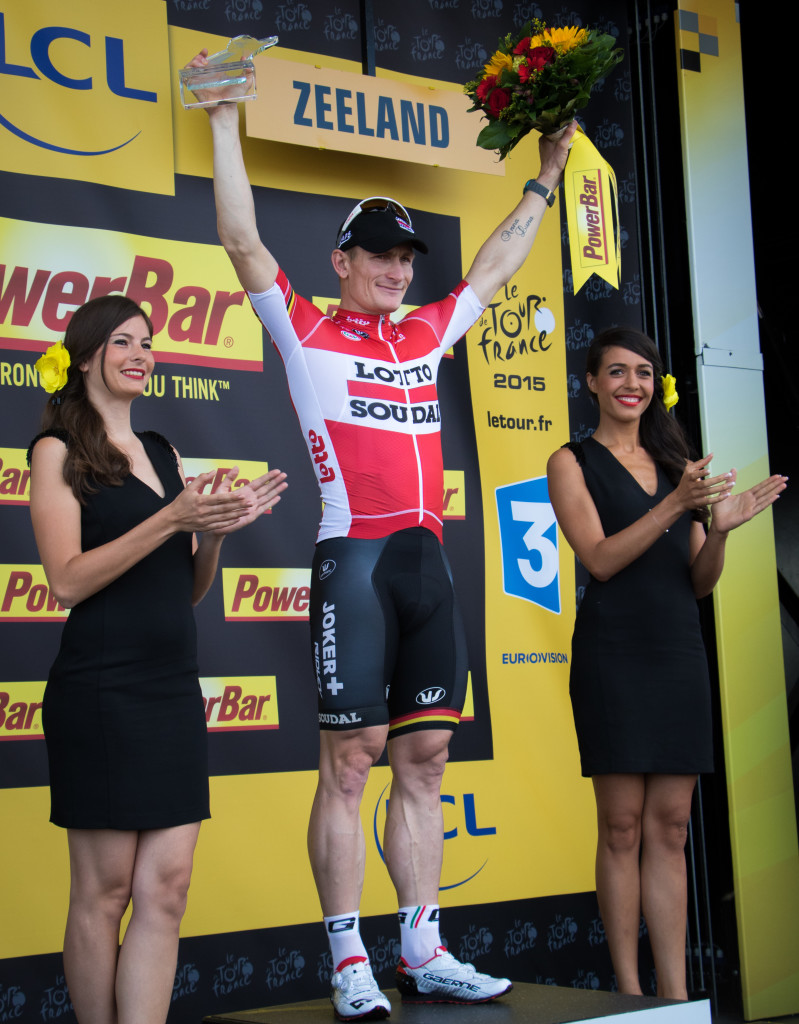 Fabian Cancellara took 3rd on the day, and his placing in the ITT a day before put him in the yellow jersey. 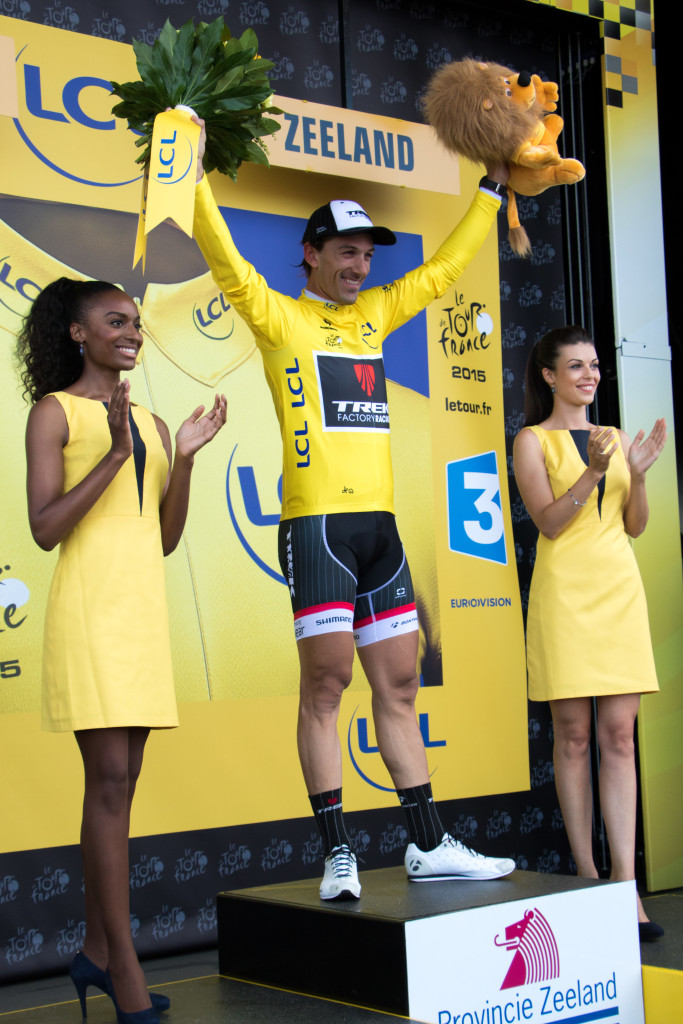 I missed the shot for the actual finish, but hey, that’s bike racing. Or something like that. I did catch up with some very tired and gritty riders after the race, though.

And I even caught up with a post-race Cavendish, who was visibly pretty bummed about the loss. Who knows if he would have won had he and Renshaw kicked later, but it’s undoubtedly the reason that he lost. “You won’t win the race [doing x], but you can certainly lose it.” Classic bike racing. 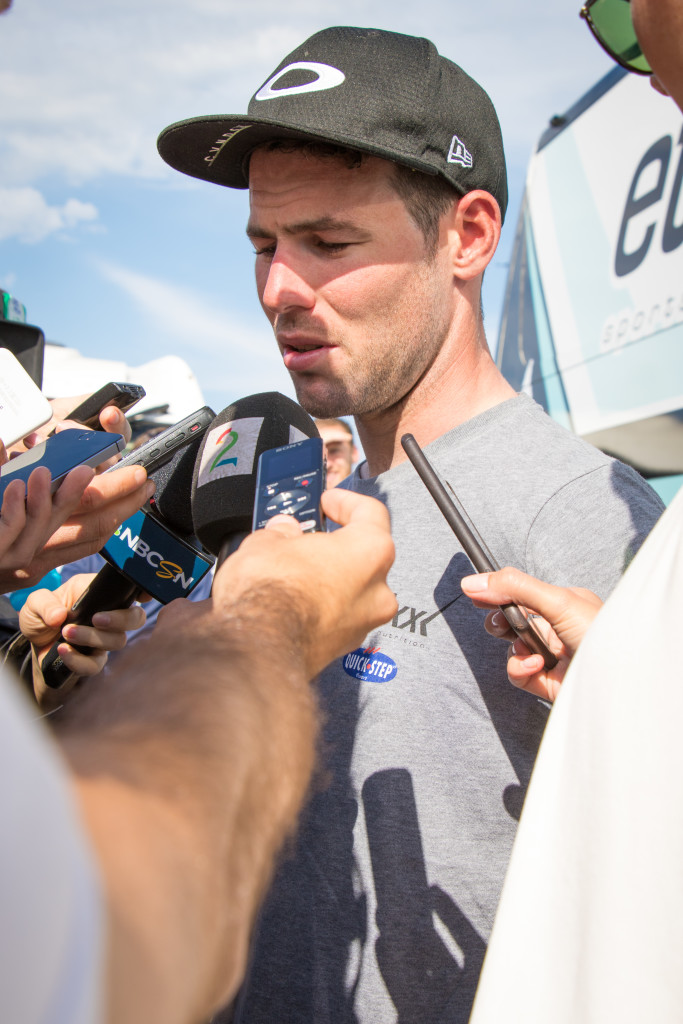 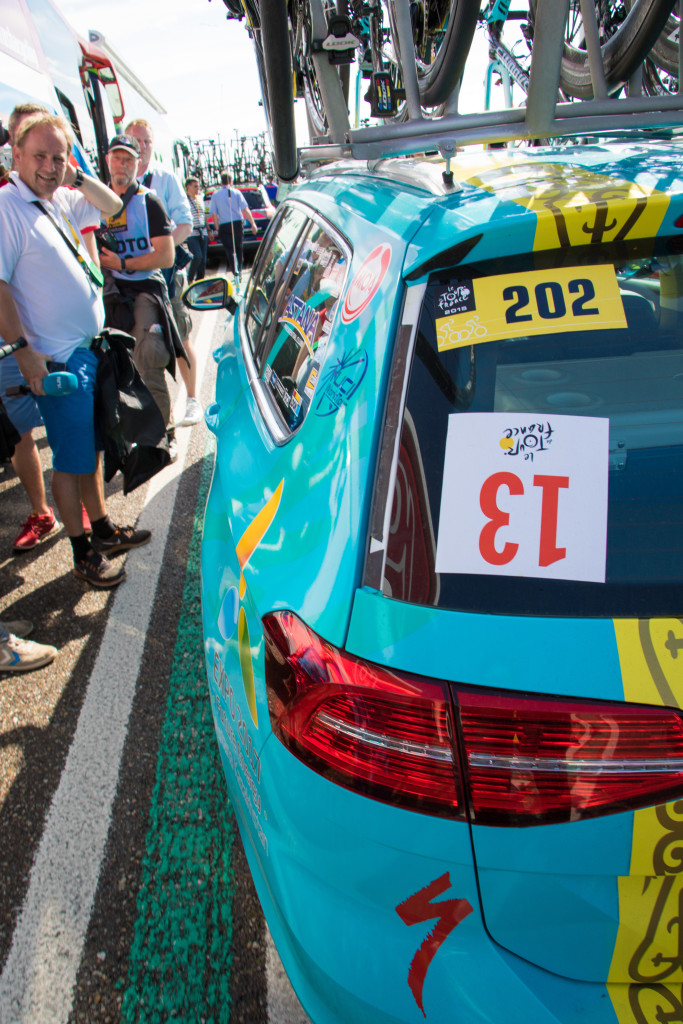 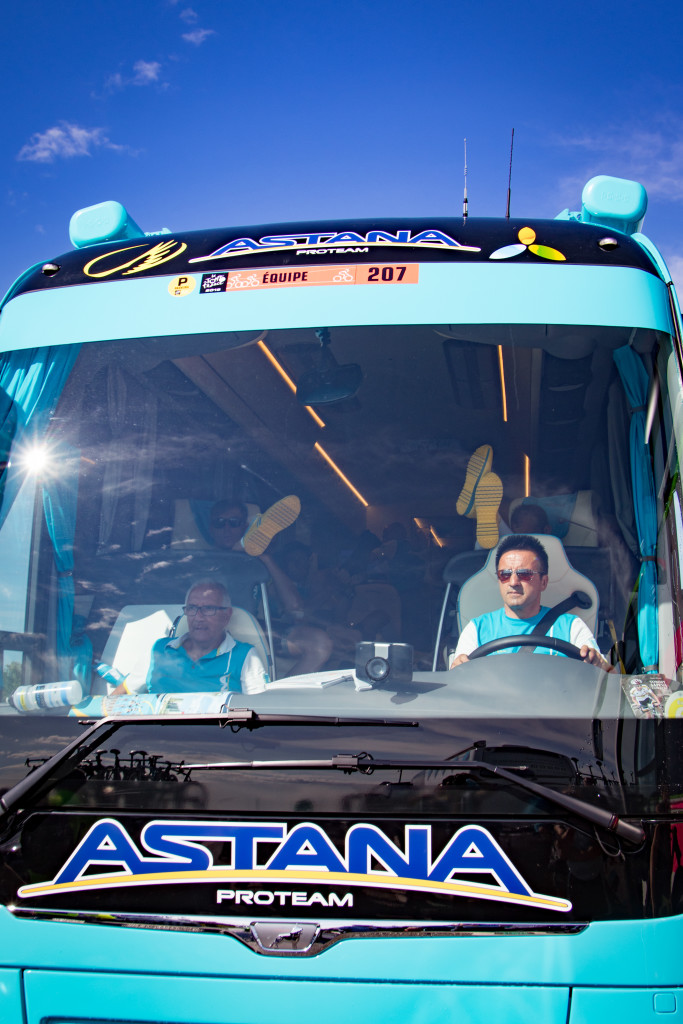 Stage 3 begins in Antwerp and winds towards Huy, with a finish on the spring classics stalward, the Mur de Huy. 1.3k, with an average grade of 9.3% that kicks up to 17% at some points. Should make for an excellent finish. Classics bike racing. 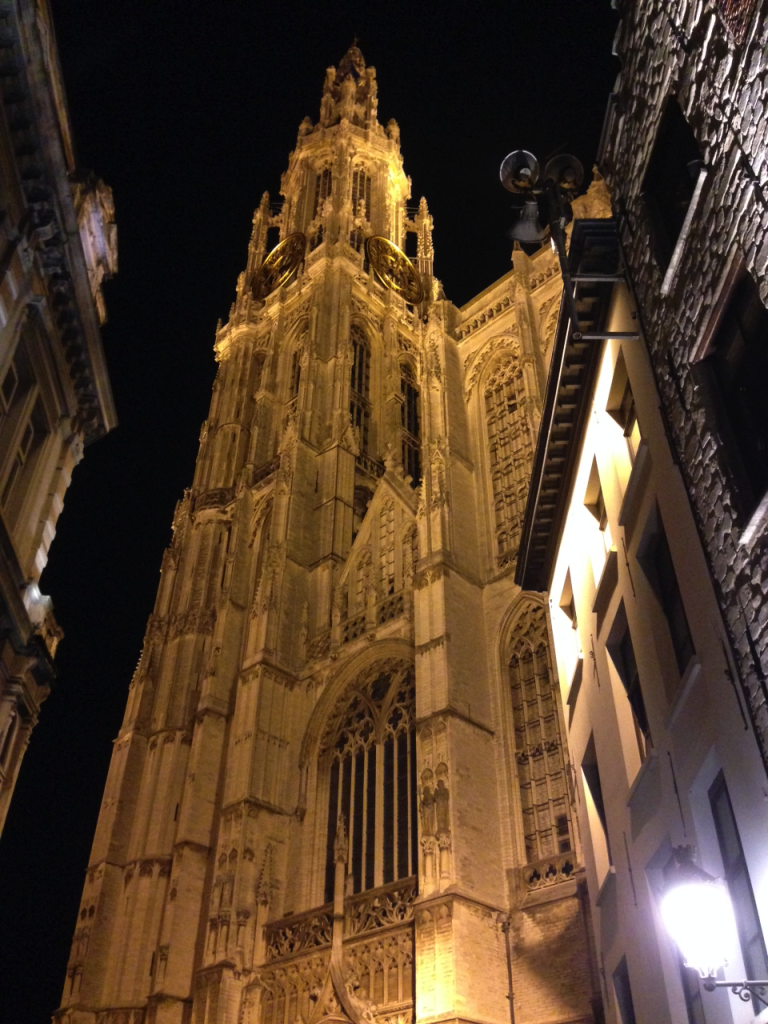 Thanks for reading and stay tune for Part III.