After the miserable weather conditions of yesterday, today should have been a change of pace for the riders. A few cat 4 climbs and beautiful weather is all that separated the riders between Antwerp and the Mur de Huy (and the Côte de Cherave, a punchy .9k cat 4 a few k before it). Not that Cherave and the Mur de Huy are easy (they’re not), but so close to the finish, all a rider needs to do is get up the damn things, and they’re not going to miss a time cut. It should be exciting racing for those at the front, but not demoralizing for those not. Now, with that being said…

Holy bike race! Stage 3 was crazy. Some serious action went down, Mur de Huy provided some fireworks, the yellow jersey changed hands, and the tour saw its first abandonments. But first, let’s start at a relaxing, beautiful start in Antwerp: 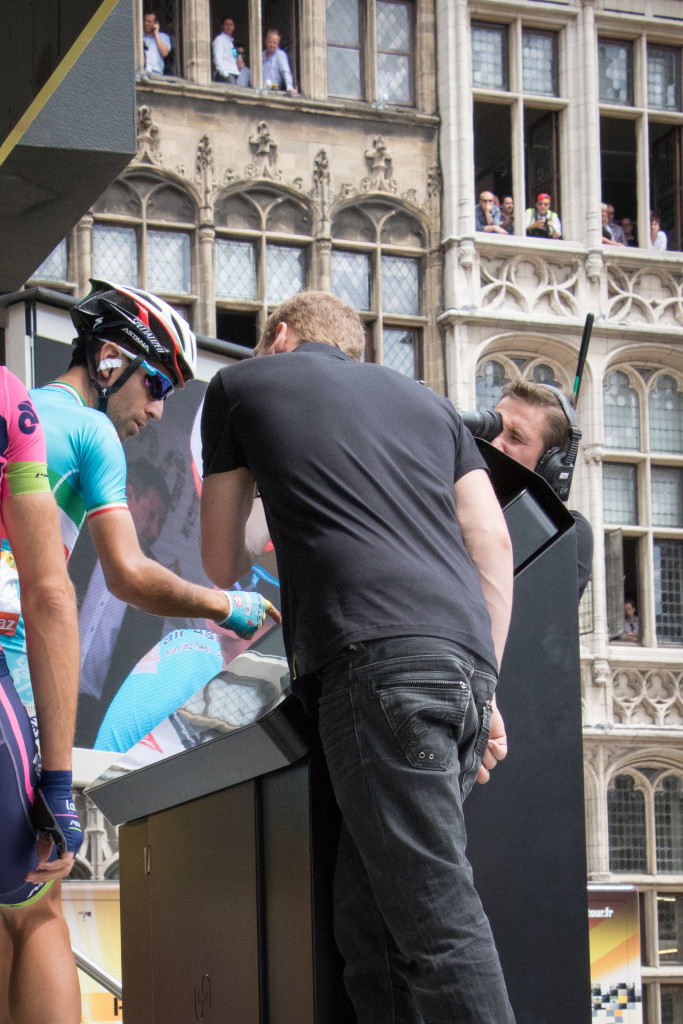 Gear and Tech:
More SRAM news: Luckily, some SRAM reps were on hand for me to chat with at the AG2R team bus. I asked very nicely if I could handle it and test the lever feel/shifting, but was met with a (very nice) “no.” I did ask about its obvious use in the wild despite no formal announcement.

SRAM engineer: We expect wide availability by 2016.
Me: Oh, so an Interbike announcement then?
SRAM engineer: …That’s not, uh… that wouldn’t be a terrible guess.

Of note, the entire AG2R-La Mondiale team is riding the electric group for the Tour. At the Giro, only Pozzovivo was riding it. 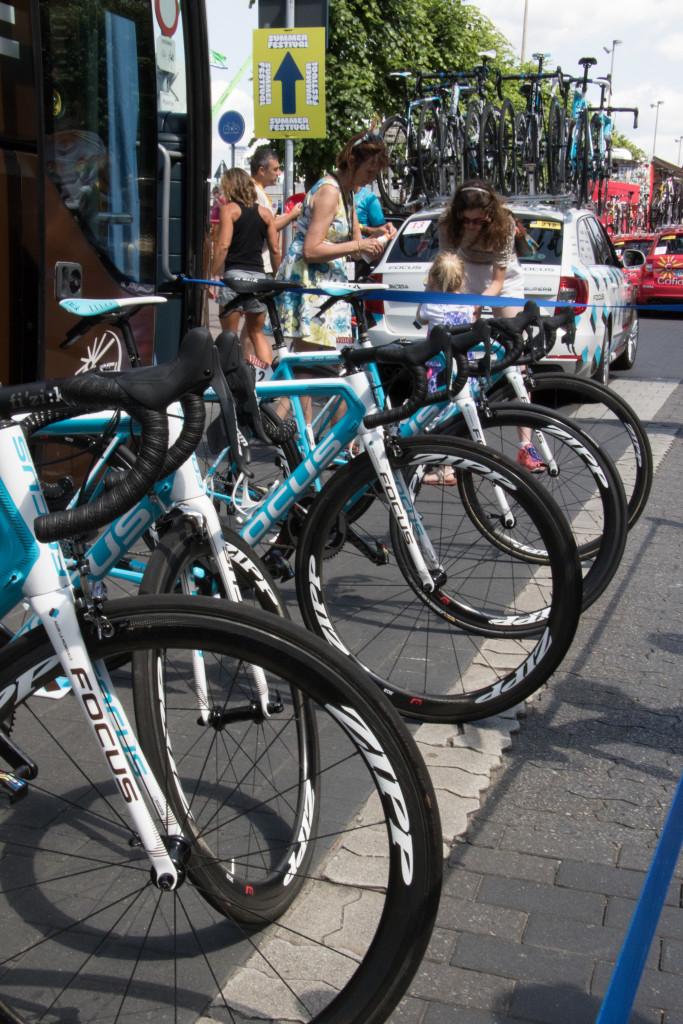 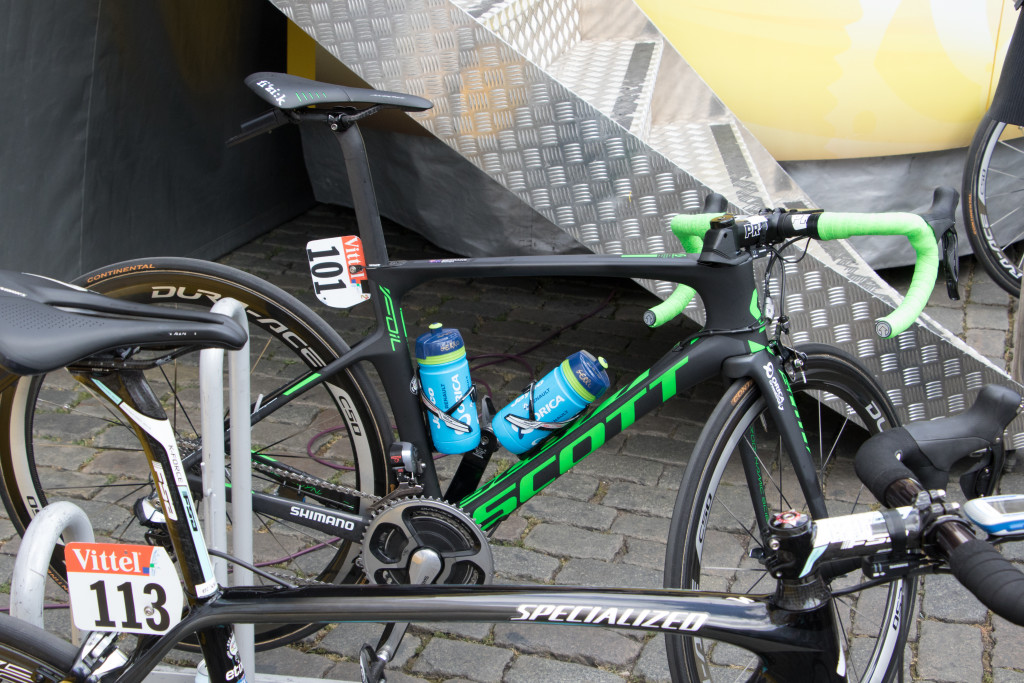 At some point after the above photo, all hell broke loose. I watched live from the press center as an FDJ rider clipped wheels somewhere far up the bunch, and domino’d several riders down with him at around 60k to go. Too many riders to count went down at speed, with Cancellara looking the most visibly injured of all. The crash was so bad, the race organizers neutralized the field to a stand-still for 20 minutes, as there was no longer adequate medical staff on hand to continue racing.

Once the field started moving again, the race was neutral to top of the Côte de Bohisseau with 50k to go. TV visuals showed several riders with very torn up kits and some gnarly road rash. Lotto-Jumbo even reported that Laurens Ten Dam suffered a dislocated shoulder, popped it back in, and kept racing. METAL.

While Cancellara got back on the bike and made it to the finish, he was visibly hurting pretty bad. Of the wounded, the crash also claimed the first abandons of the tour, with Tom Duomolin (Giant-Alpecin), Simon Gerrans (Orica-GreenEdge), William Bonnett (FDJ), and Dmitry Kozontchuck (Katusha) calling it quits. Heal up quick, guys. [Ed. note: Latest news – Cancellara breaks vertebrae AGAIN, and will not be riding in tomorrow’s stage. Awful.]

With about 40k to go, the race was back on, with Astana and Tinkoff-Saxo driving a split between the group. To my knowledge, no major GC players were caught out by the split, but the second group did include Cancellara who would go on to lose too much time to keep the jersey.

Towards the finish, the Côte de Cherave thinned the herd a bit. As the pack hit the Mur de Huy, Katusha set the pace, with Gianpaolo Caruso working for Joaquim Rodriguez. At around 500m, Chris Froome (Sky) went to the front and began to push the pace, but not outright attack. At 400m to the finish, Rodriguez hit the gas, and that was that! Froome was able to hang on for a same-time placing, but Rodriguez was able to post up with room to spare. While Froome did not get the stage win, his time gain was enough to place him in yellow. 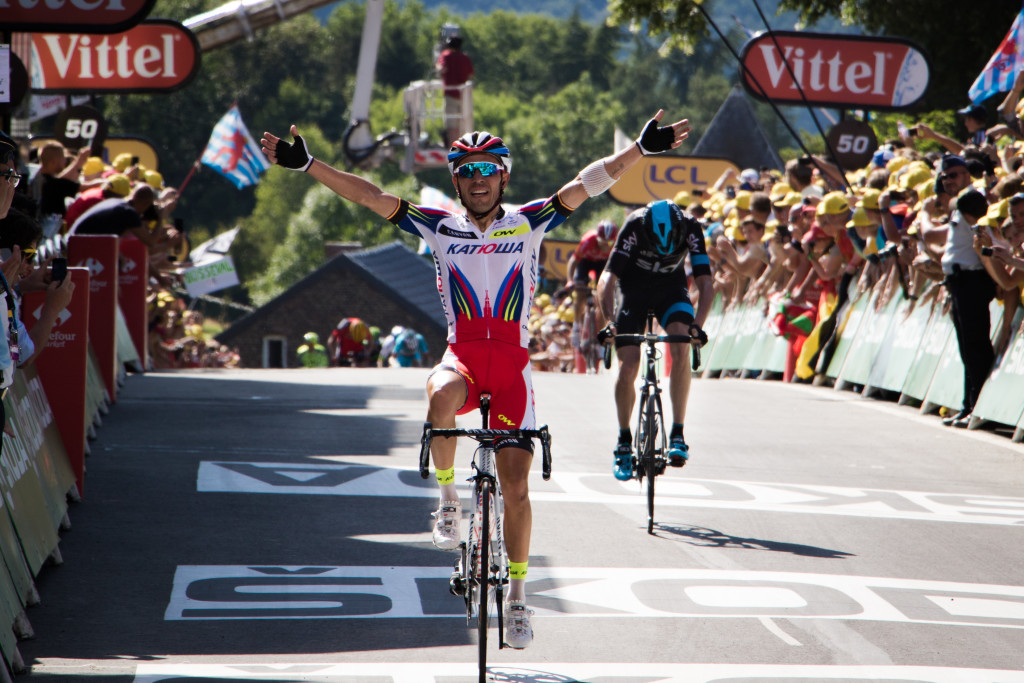 With Duomolin out, Sagan is now in the white jersey.

I skipped the podium ceremony today in favor of getting some rider reactions at the team busses.

At the mobbed team bus, Contador was more than happy to chat with the crowd and sign autographs. 8 seconds isn’t much, and it’s the high-mountains where this year’s Tour will be won or lost. Although with the stage tomorrow, a bad day could certainly ruin someone’s chances… 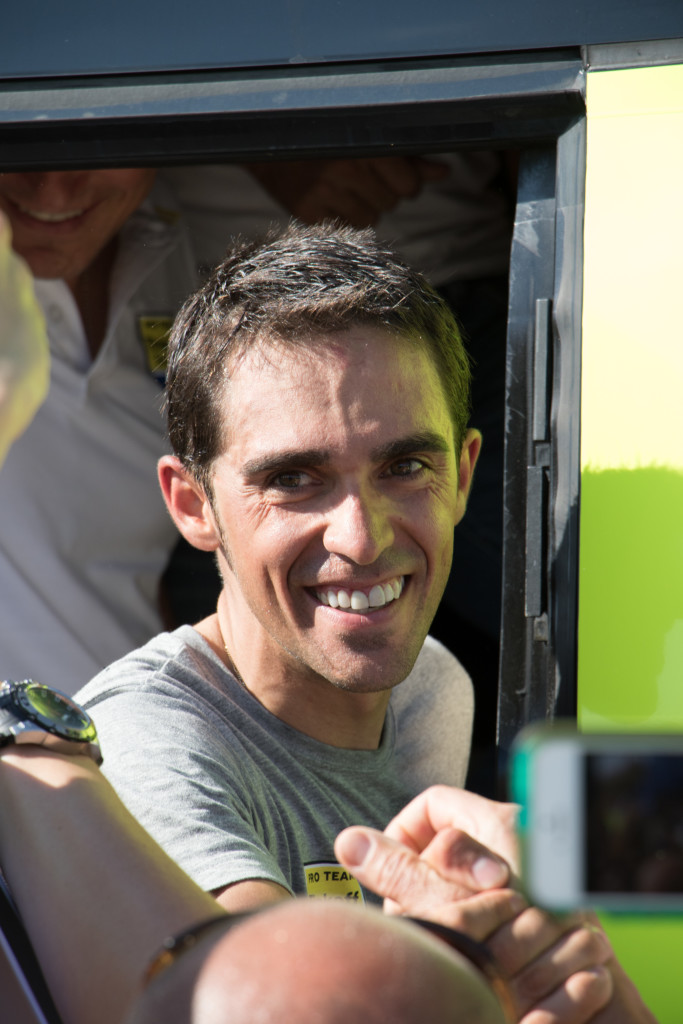