The Tour de France actually entered France for the first time in 2015, and it did so in epic fashion. Furthermore, it’s as close to CX as it gets at the Tour: cobbles. From Seraing to Chambrai, the peloton saw 7 secteurs of cobblestone ranging from 1,200 to 3,700m in length, with a total of 13.3km of stones. If that wasn’t enough, the consistent threat of rain throughout the day kept suspense high for what flavor of slippery the riders might have to face: dusty or wet. 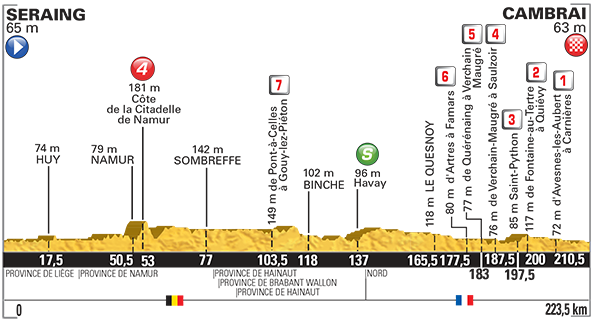 With cobbles in the mix, teams are looking for every advantage they can get. With most teams I spoke with today, riders were expressly planning to swap bikes around 70k to go, just before the onslaught of secteurs leading to the finish. Most teams had a fleet of endurance road bikes atop their cars, to complement the standard/aero road bikes their rides would set off with. AG2R-La Mondiale took things a step further, with Jean-Christophe Peraud and Romain Bardet opting to swap to canti-equipped Focus Mares cyclocross bikes. 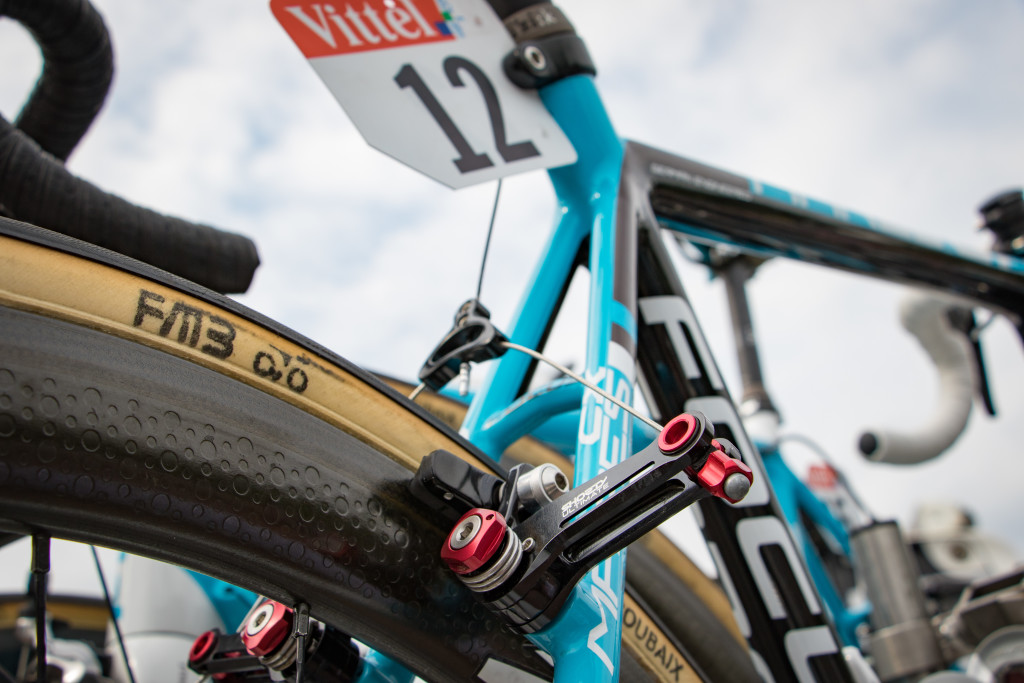 Just in case, their bikes were also fitted with a full inner chainguard, in place of the standard Sram derailleur chainspotter. 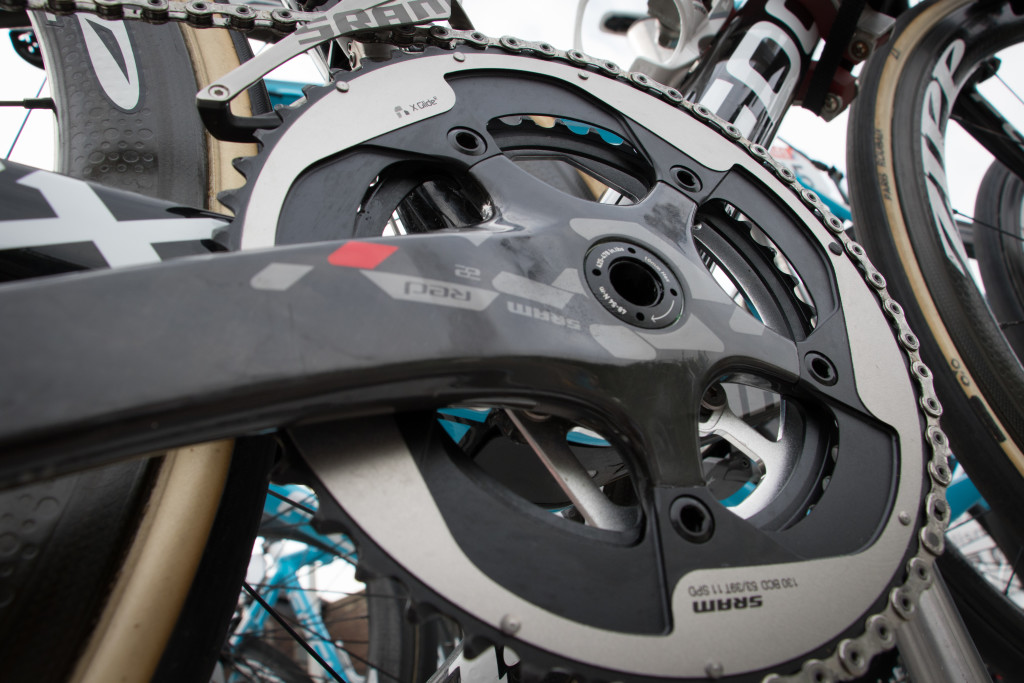 AG2R don’t mess around. Strangely absent was any form of clutch-type rear derailleur. They’re taking every other precaution, might as well have one?

Elsewhere in the team zone:

At the sign-in podium:

It seems Peter Sagan (Tinkoff-Saxo) is a regular reader here, because the very next day, here he is posing with a young fan. Still not entirely convinced about Tinkov/his soul, though. 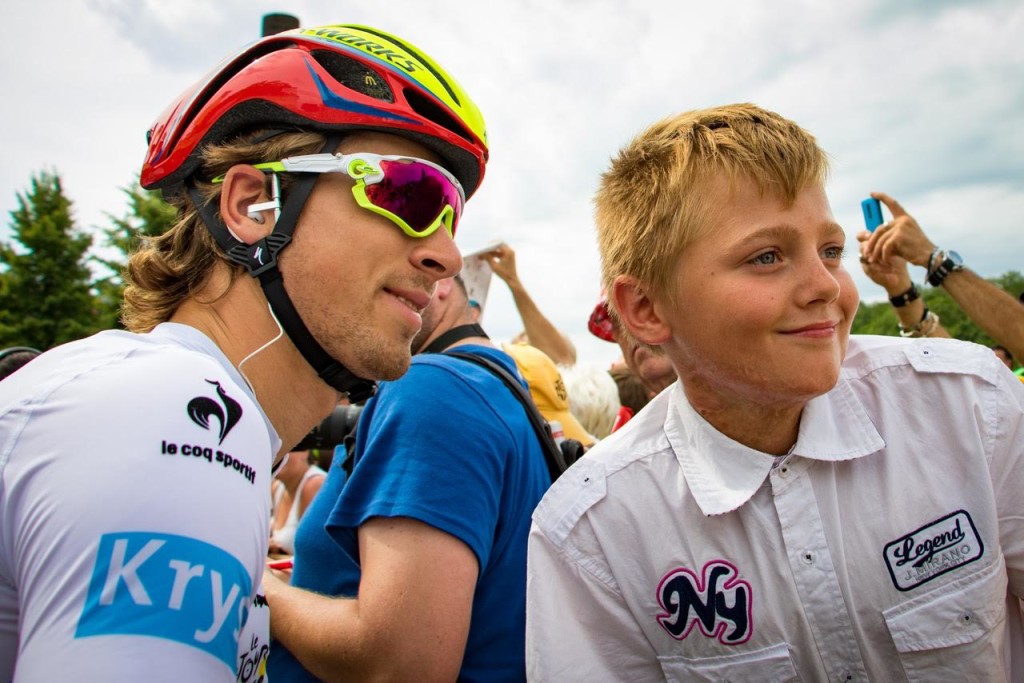 And here is a montage of Chris Froome (Sky) looking at stems. These are presented in the sequence I shot them, and no, I can’t really explain, either.

No shot of the start-line today – had to move quick to make it to the next sections of the course.

The rest of the pack passes: 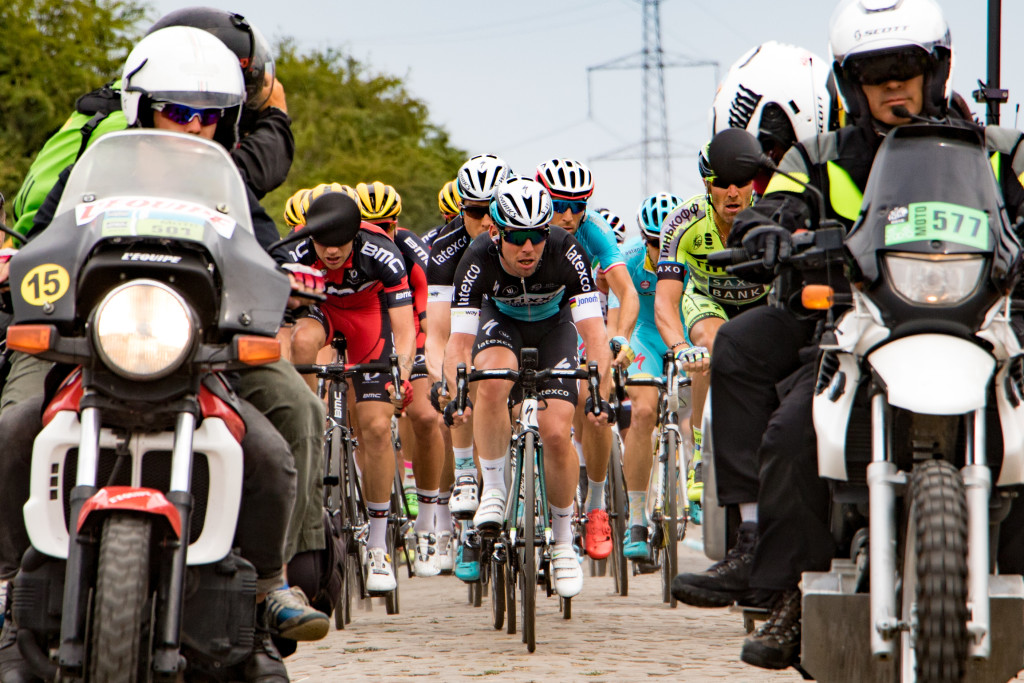 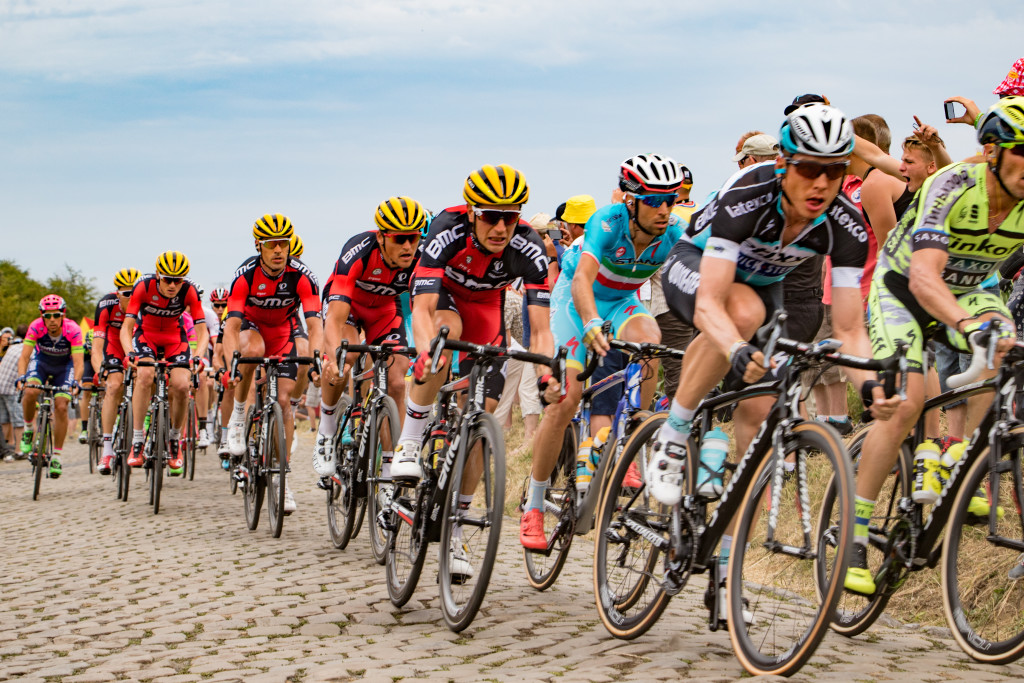 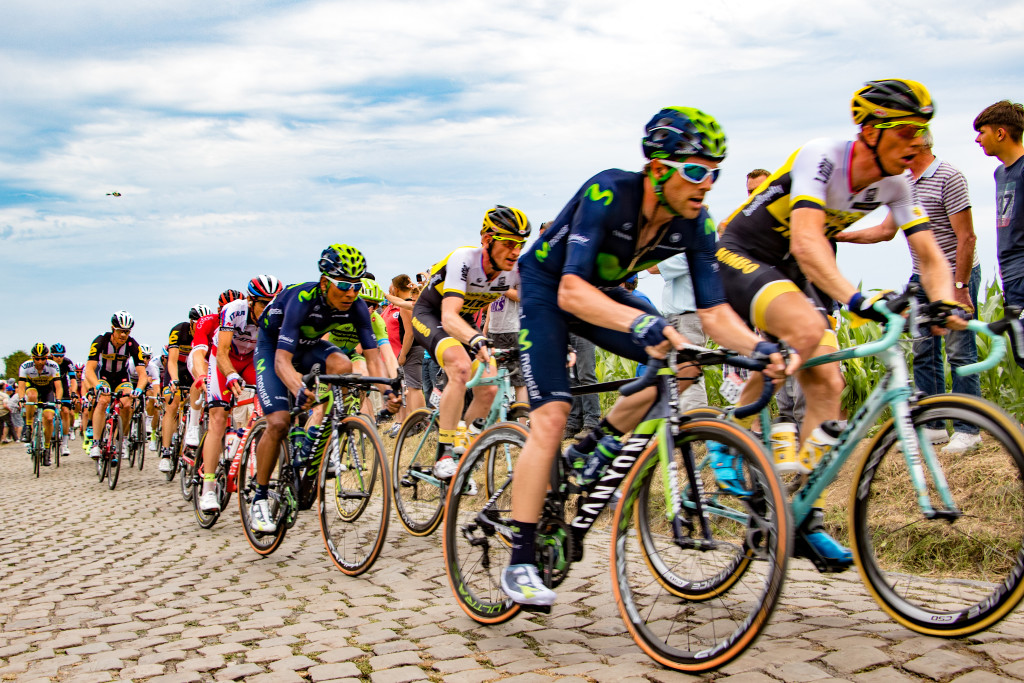 As soon as the bunch passed, I sprinted to my car to head for Secteur 5. Having provided no mechanical support, the Katusha boys did the same. 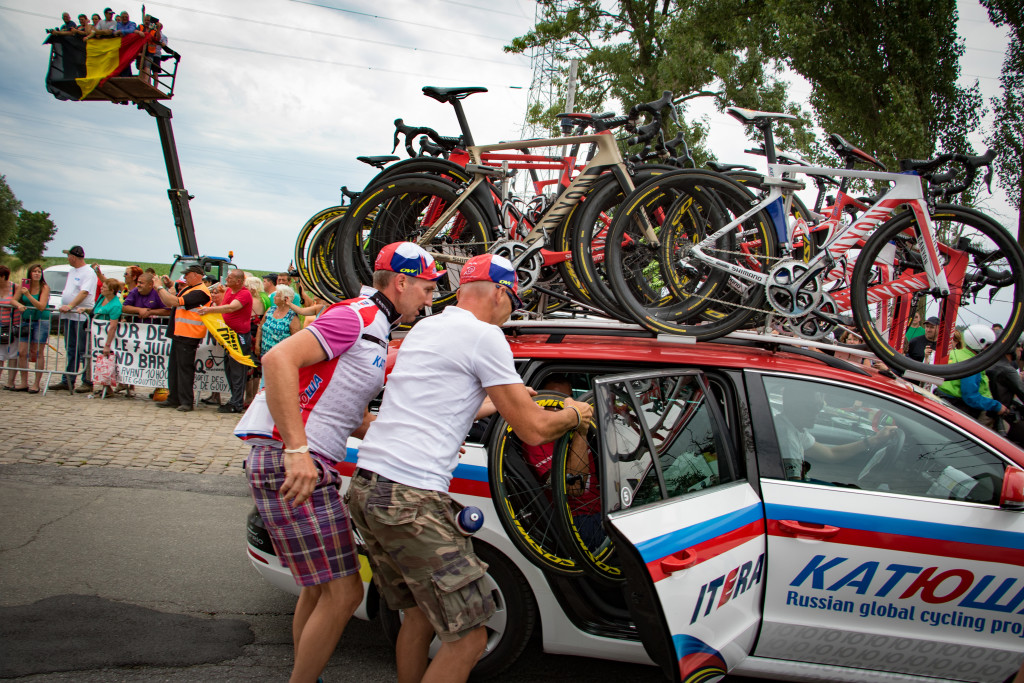 Despite on and off light drizzle before the riders arrived, the rain ultimately held off. 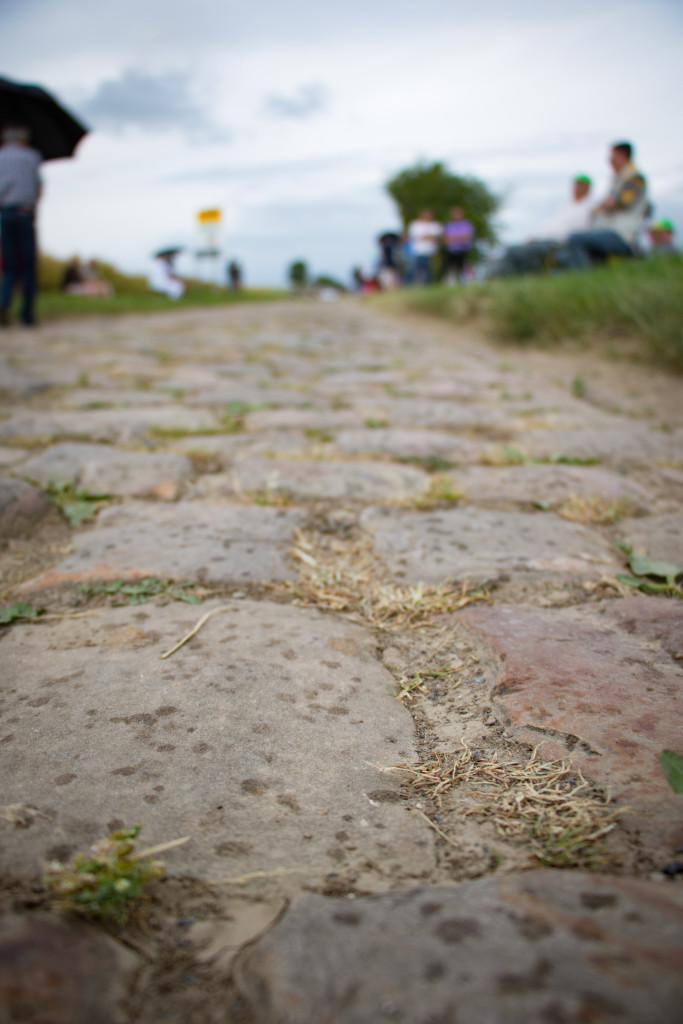 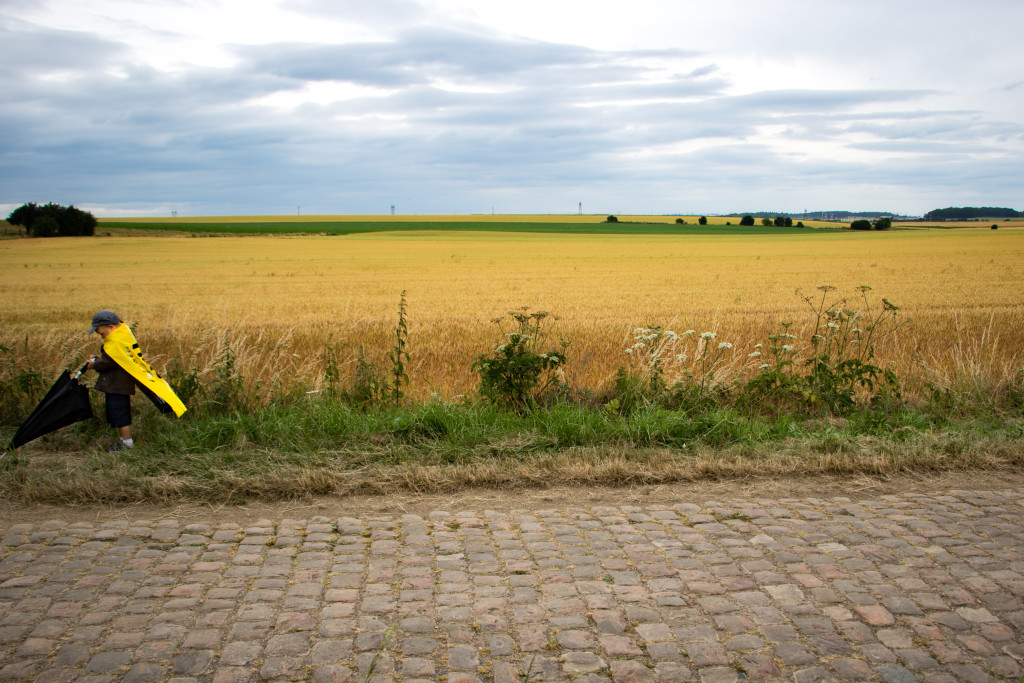 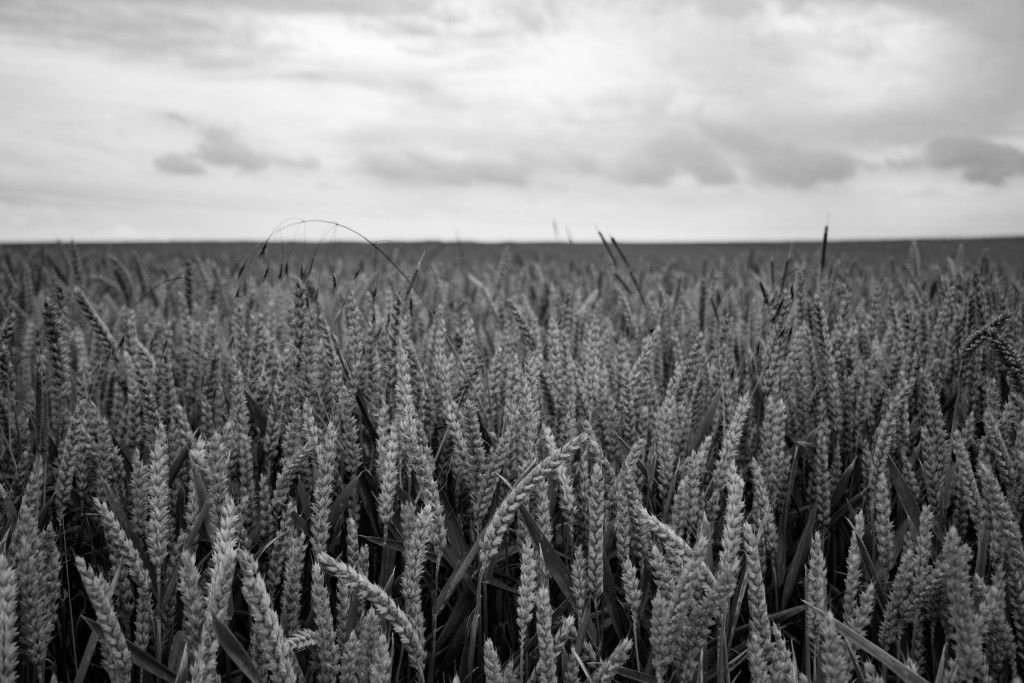 The pack came and went through secteur 5 without much to note – no attacks nor mechanicals within my view. I should point out that’s Vincenzo Nibali leading the bunch, riding very gracefully over the cobbles, especially for a GC contender. 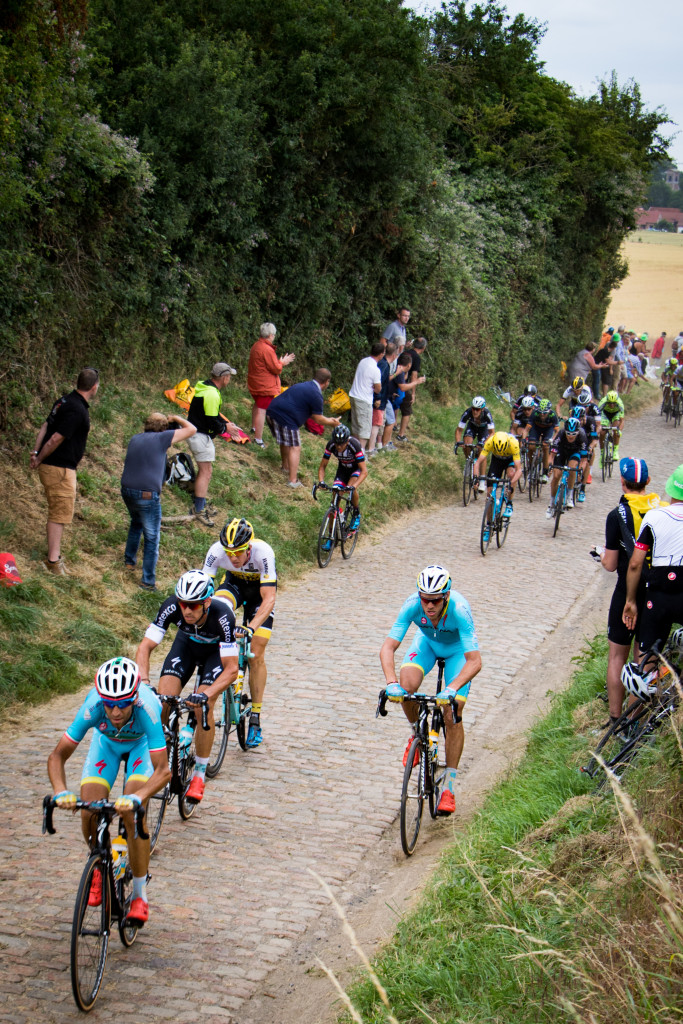 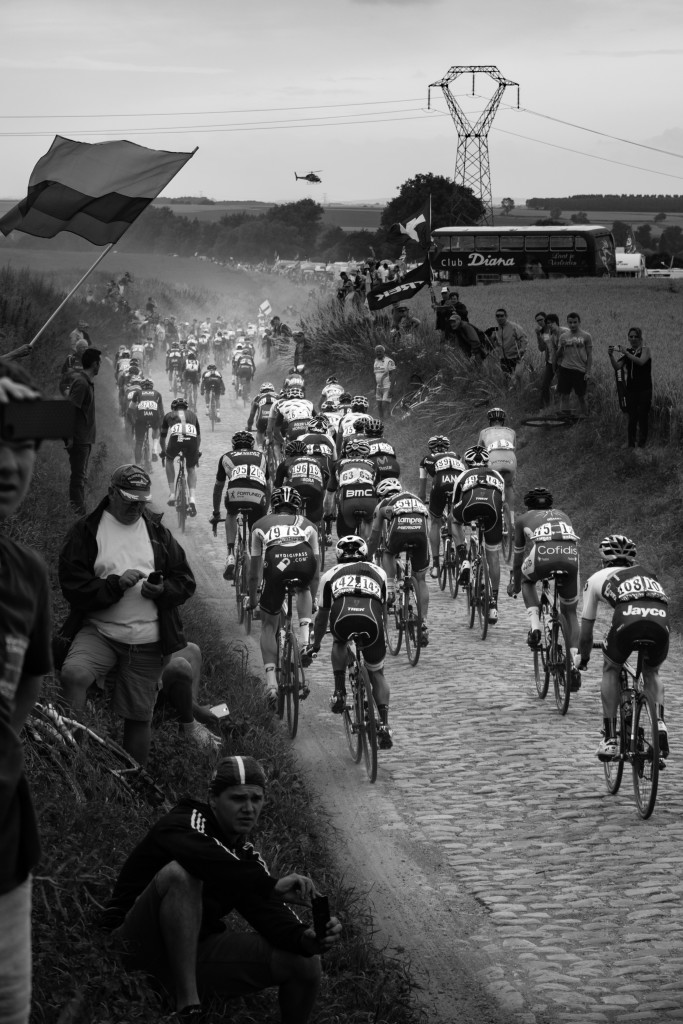 Honestly, I wasn’t too happy with my perch along a bank, or the shots I took of the main group. I hopped down the bank to re-compose shots for the next riders and hope to find a decent vantage point. And then, the magic happened! After the pack, the first group of team cars passed and kicked up dust, making for a truly cobblestone viewing experience. Visibility was limited, pain faces were on, and you could taste the dust in the air. Truly the stuff of legend, although to be honest, the terroir tasted pretty much like any other dirt.

Despite my best efforts, I JUST missed the finish, and didn’t get a single shot of the lead group crossing the line. I was there just in time to look over and see stage winner Tony Martin (Etixx-Quickstep) celebrating with teammates. Not a bad tradeoff. 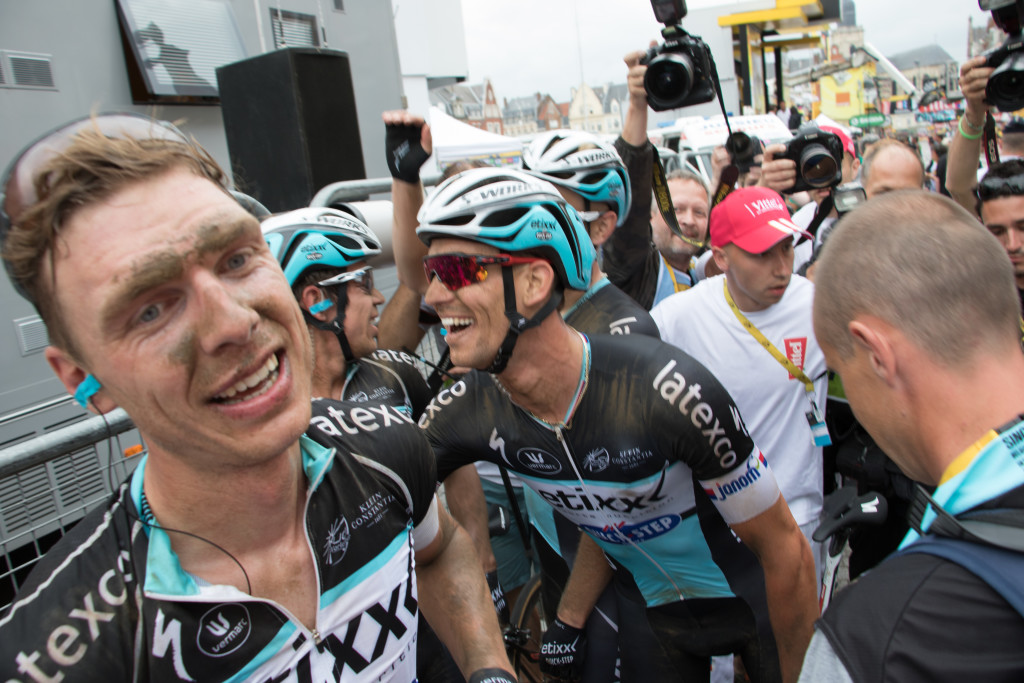 As riders continued to trickle in, the dirt on their jerseys and look on their faces told the story of the day. 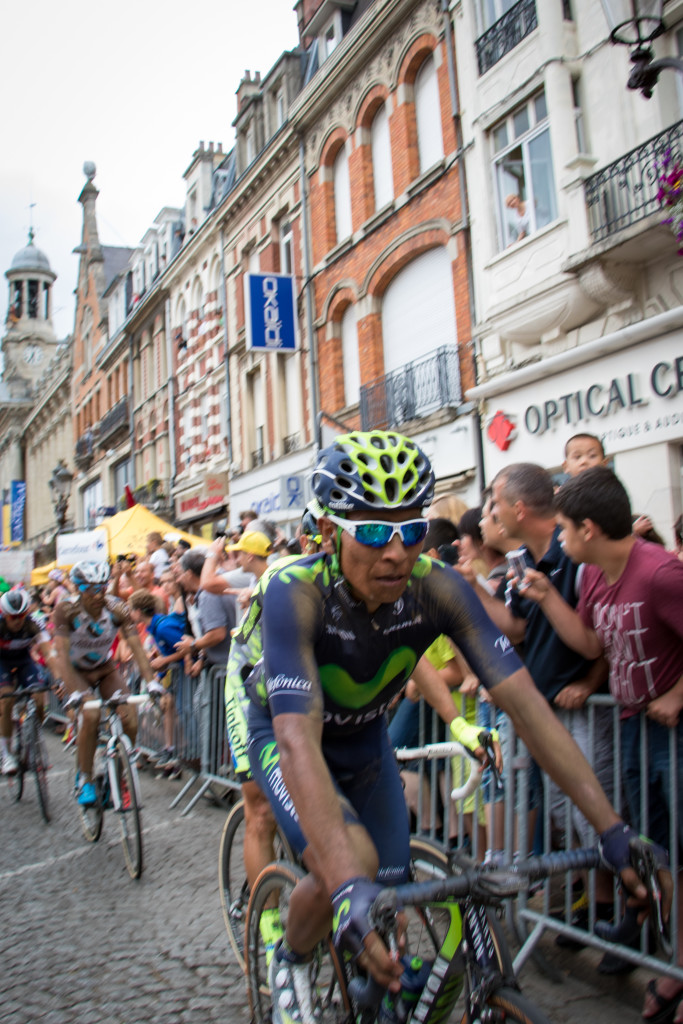 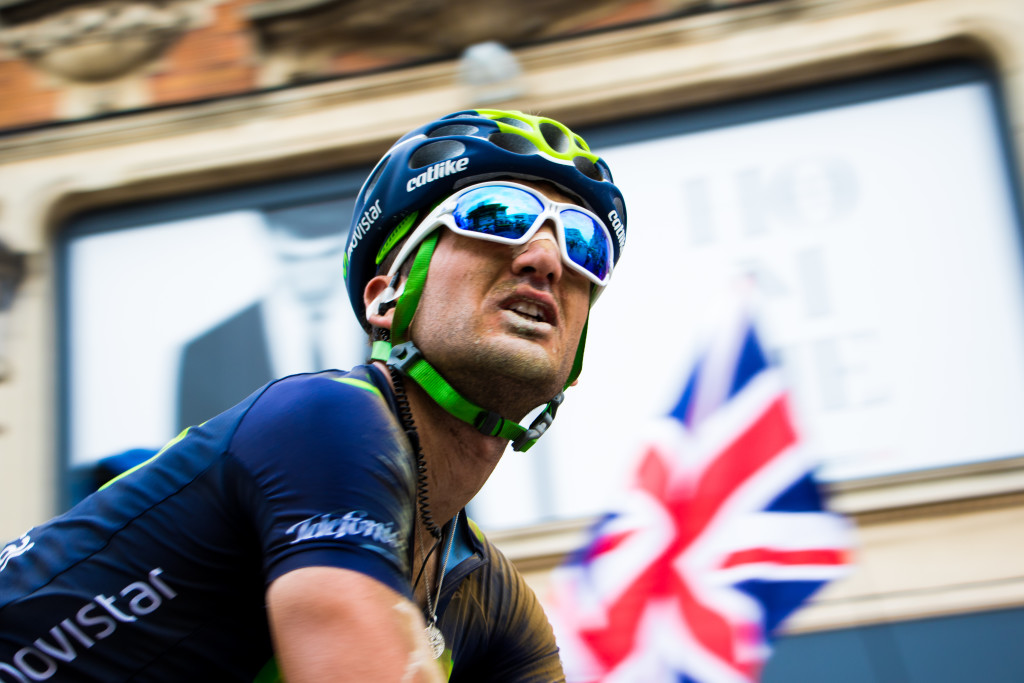 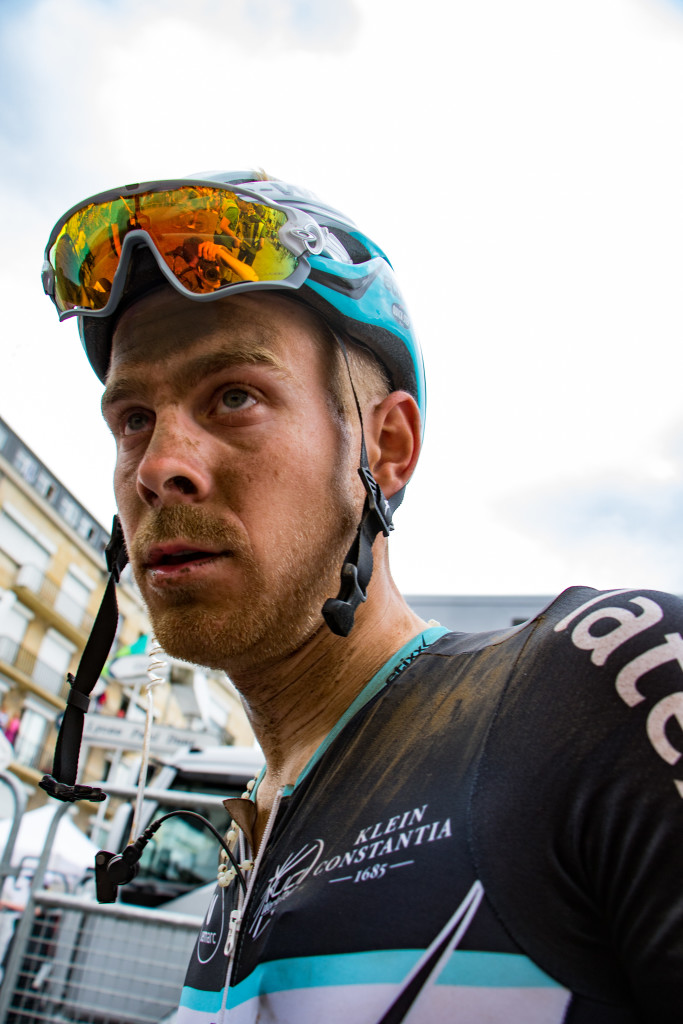 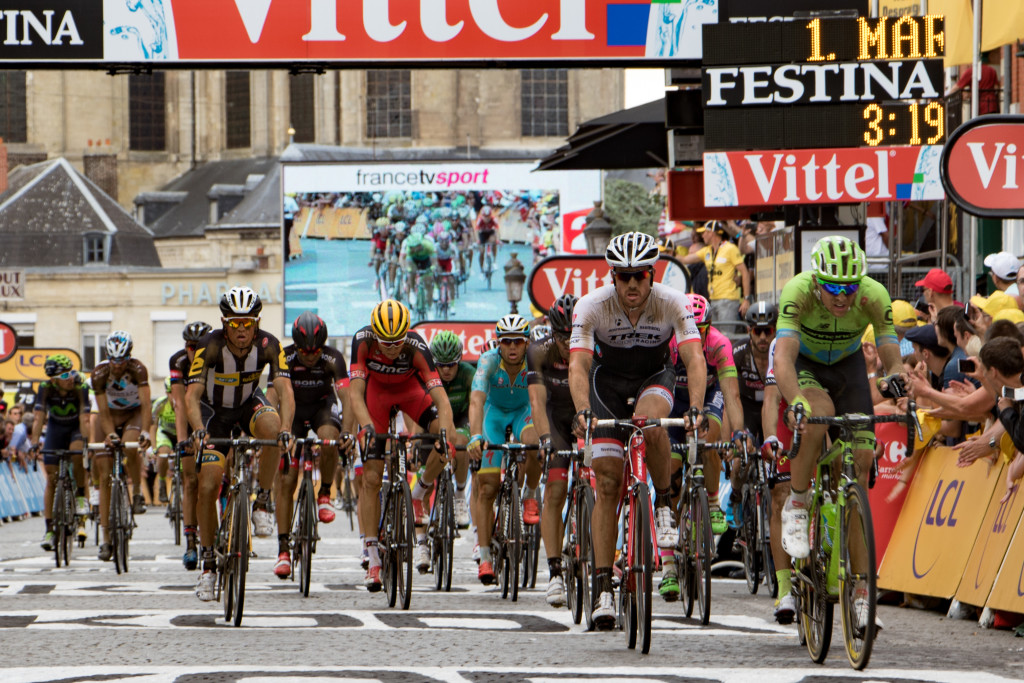 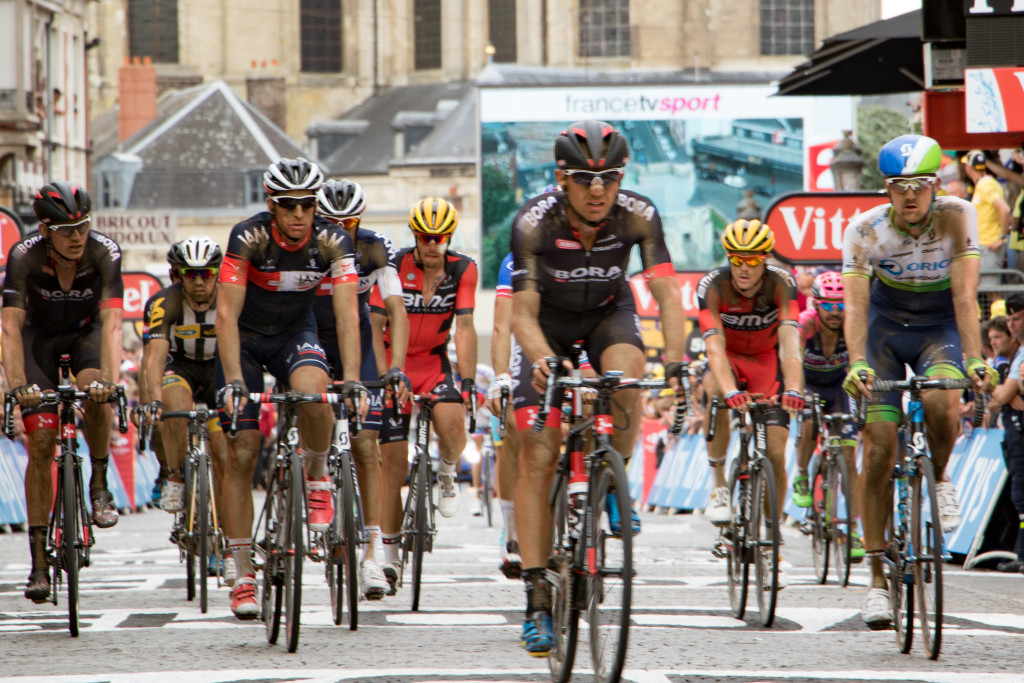 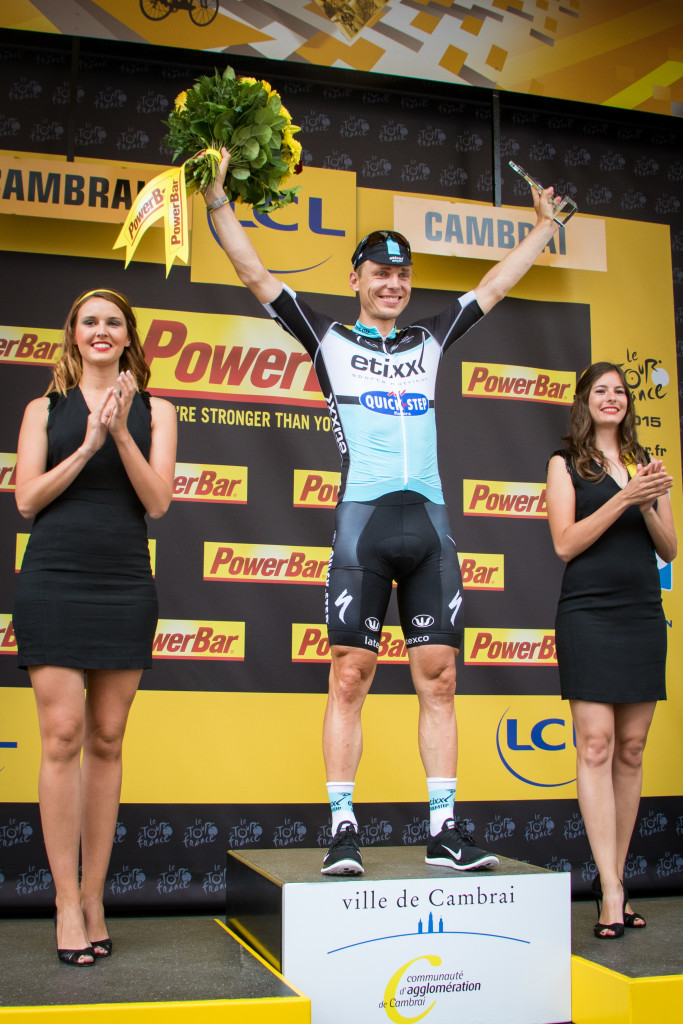 Along with the stage win, the time gap and time bonus were sufficient to put Martin in yellow – a fantastic consolation after just missing the jersey by a matter of seconds in Stage 1’s ITT. 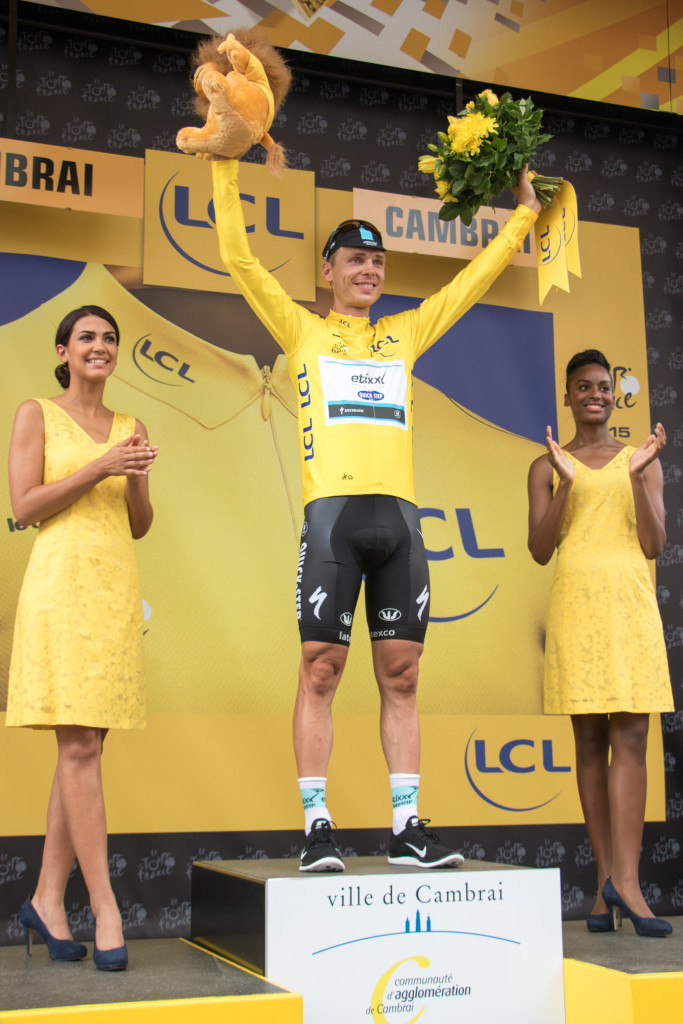