Stage 6 of the Tour ran from Abbeville to Le Havre, on a mostly coastal route. While predominantly a flat stage, the course featured three categorized climbs (all cat 4), and an uncategorized but punchy finish on the Côte d’Ingouville in Le Havre – 850m at 7% average grade. The weather was fantastic: ~20C, sunny, and a crosswind light enough to not cause any problems for the group. I spent the majority of the day absolutely shredding the backroads of France trying to head-off the race for more photo opportunities. But unlike yesterday, I had ample time to snack, caffeinate, and even tap the shutter button a few times in the start town.

I didn’t ask how long they’d been there, but they’re again in prime location for autographs. No joke, of all the riders they were actually able to ask for autographs as they came in/out of the sign-in area, their hit-rate must have been somewhere around 1/2 to 1/3. They cleaned up!

Over in the team area, Cannondale-Garmin mechanics make final adjustments to bikes for the day.

Those little fins sticking out behind the saddle? Dimension Data is behind them, and they provide realtime GPS data for all riders. Apparently, this data is being logged and will be made available to teams (and maybe the public?) to analyze how the race went down. So, informatics geeks, you too can be a part of ‘marginal gains.’ 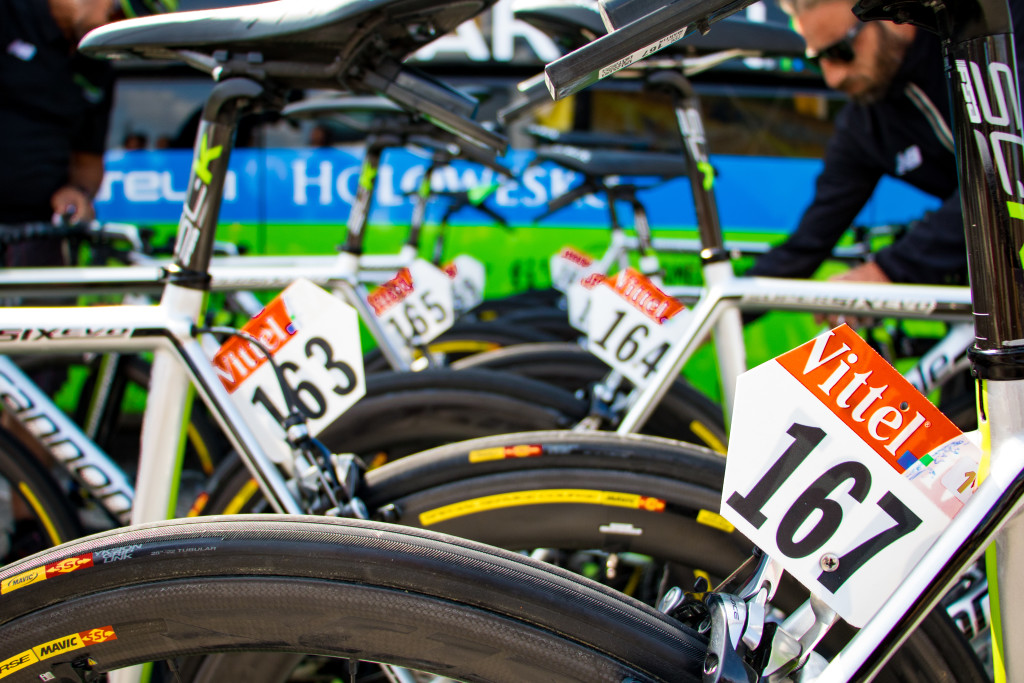 Anything for the shot. 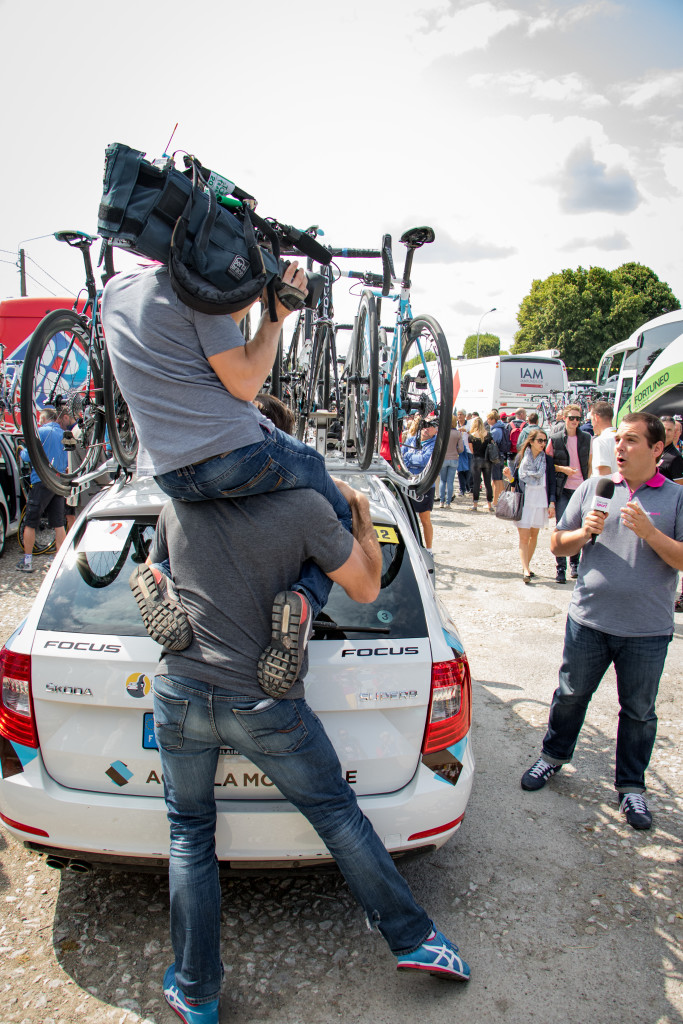 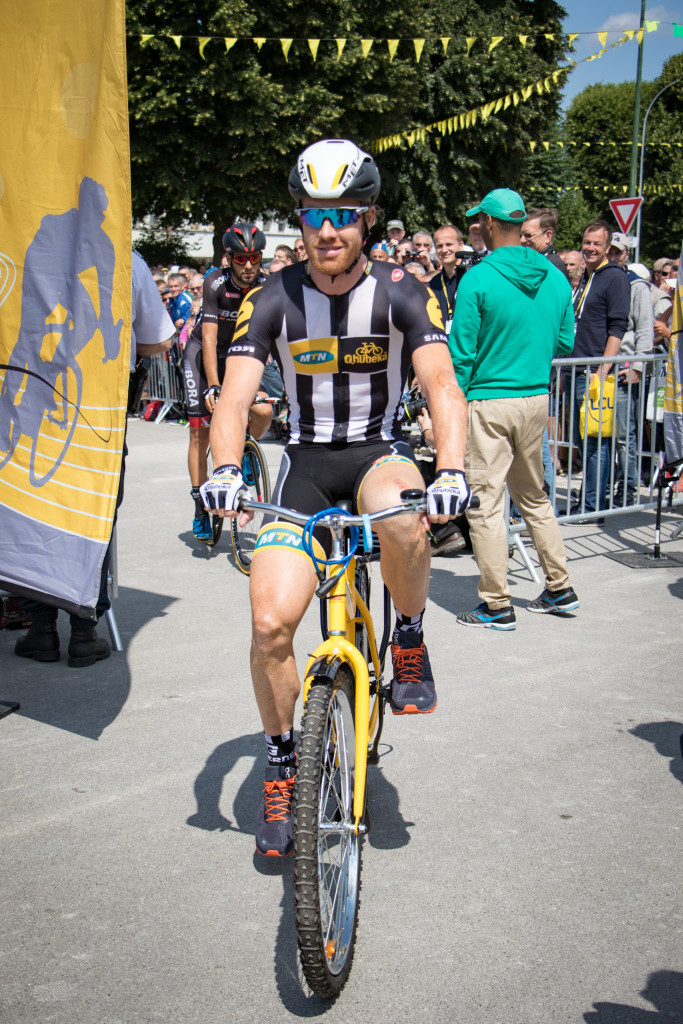 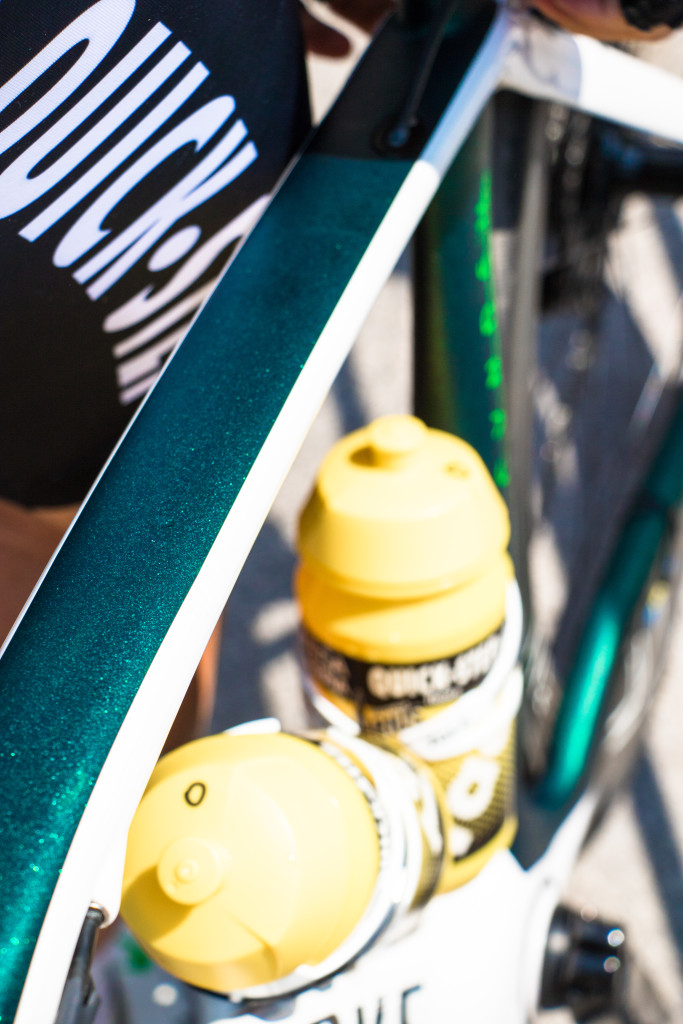 As soon as riders rolled off, I hopped in the car and headed to the first waypoint of the day: somewhere near the town of Longroy. 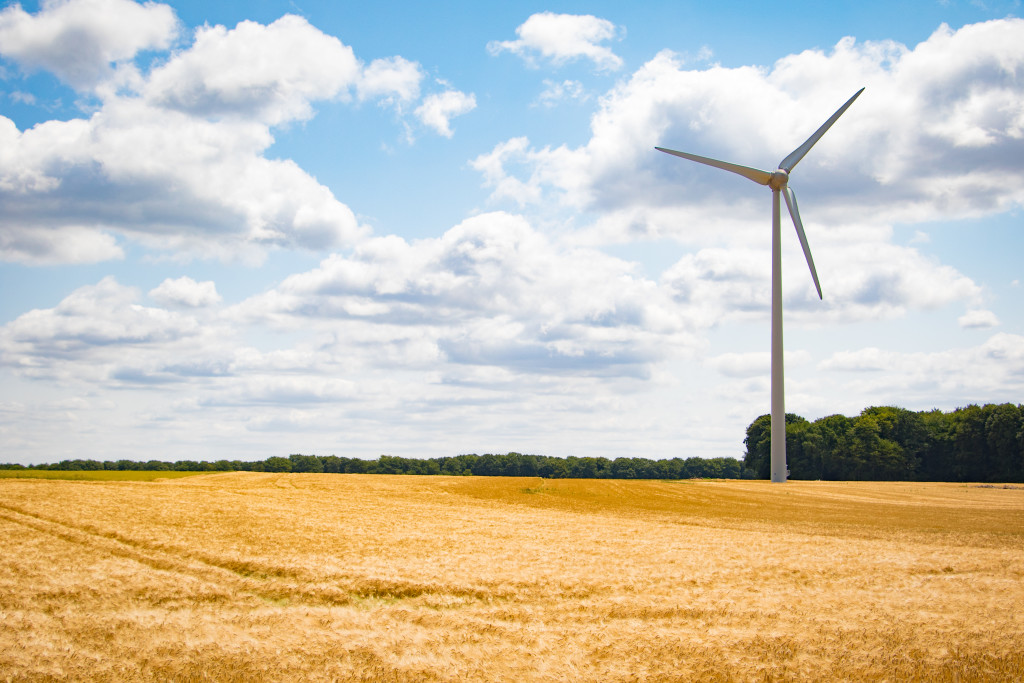 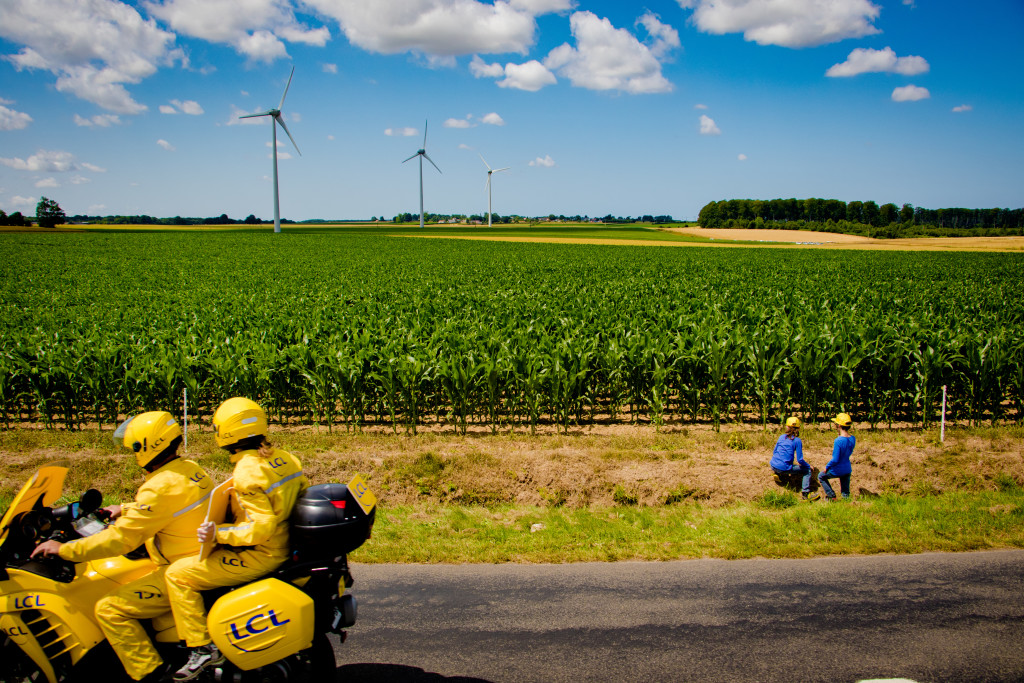 Followed a few minutes later by the peloton: 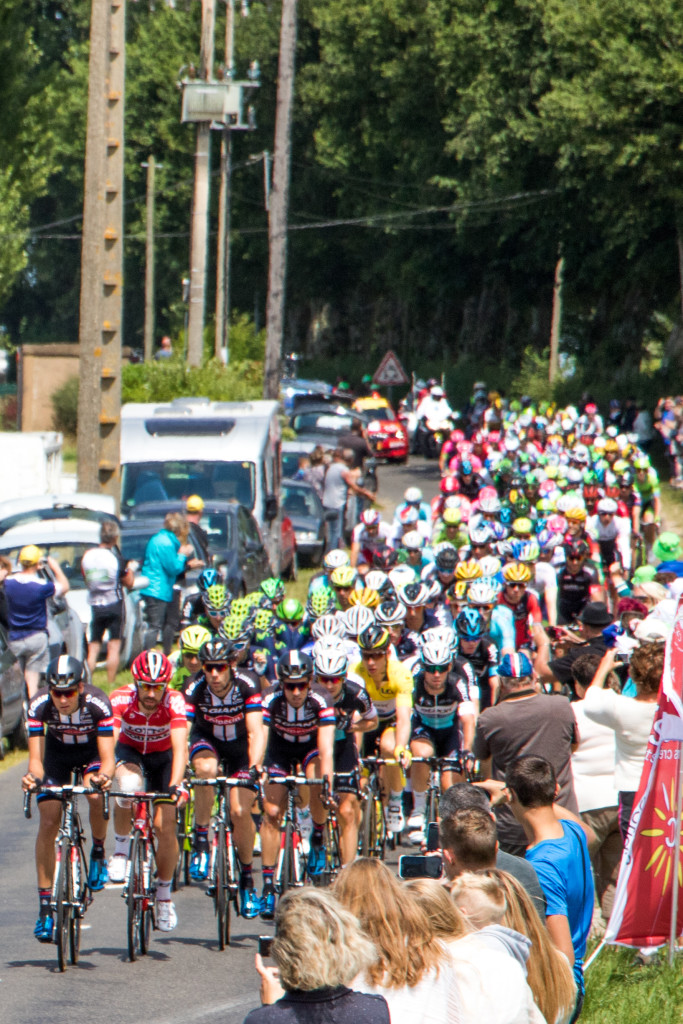 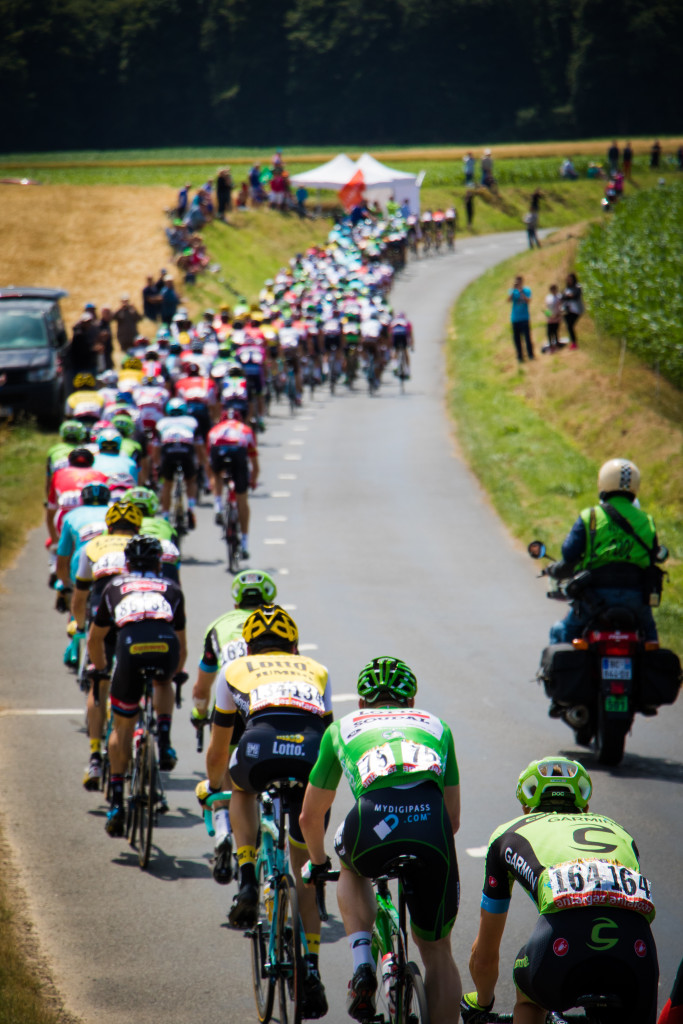 Back in the car, I followed the race to the next major crossroad. Meanwhile, I caught the IAM Cycling mechanics fiddling with shift-adjustments on a recently swapped bike. 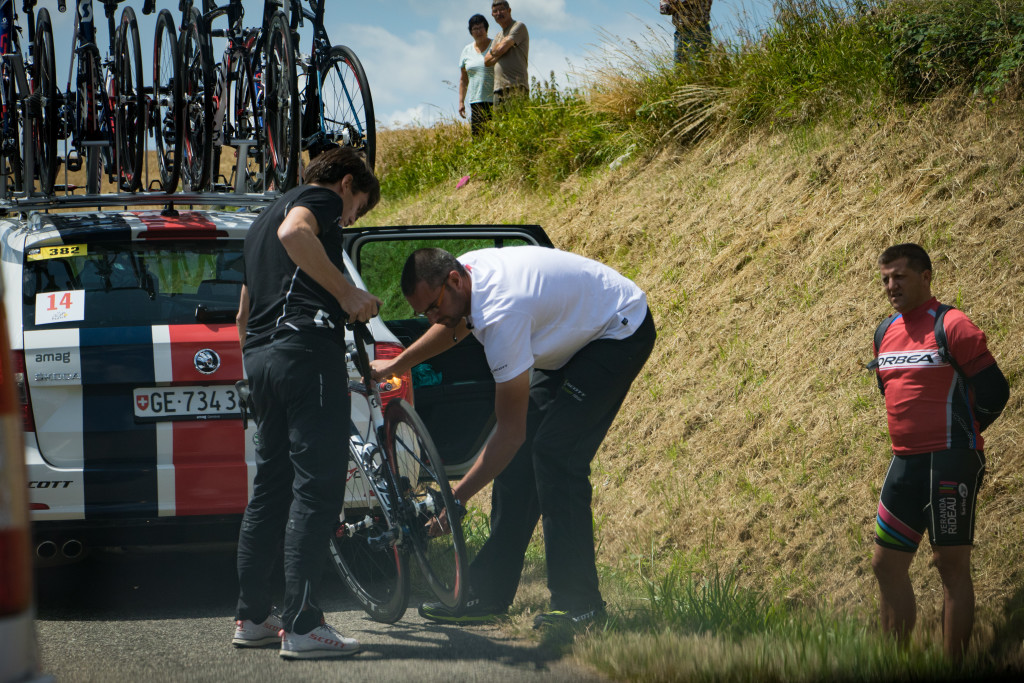 Once off the course, it was warp speed to Dieppe. I’m sure the Opel Corsa was designed with many uses in mind, of which “rally car” was not one. That being said, it held up just fine.

Scanning the skies for helicopters. 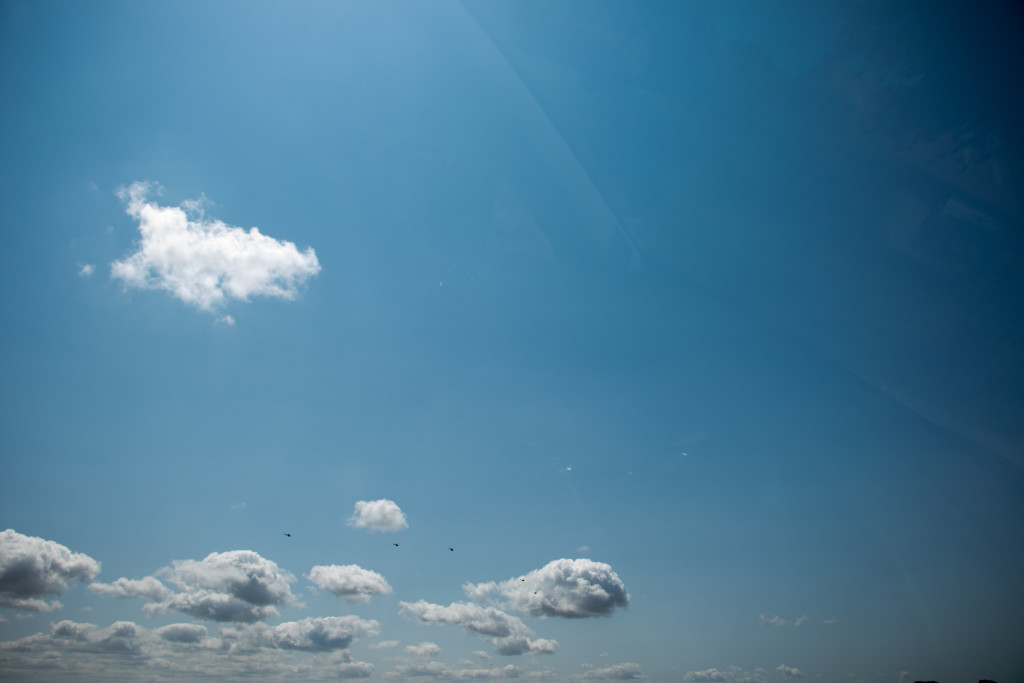 I pulled up to Dieppe moments too late. The break had already passed, and I’m only certified to be on the course, not actually within the race enclosure. Not a huge problem – I could still get shots of the peloton, from the vantage point of some conveniently placed road furniture. 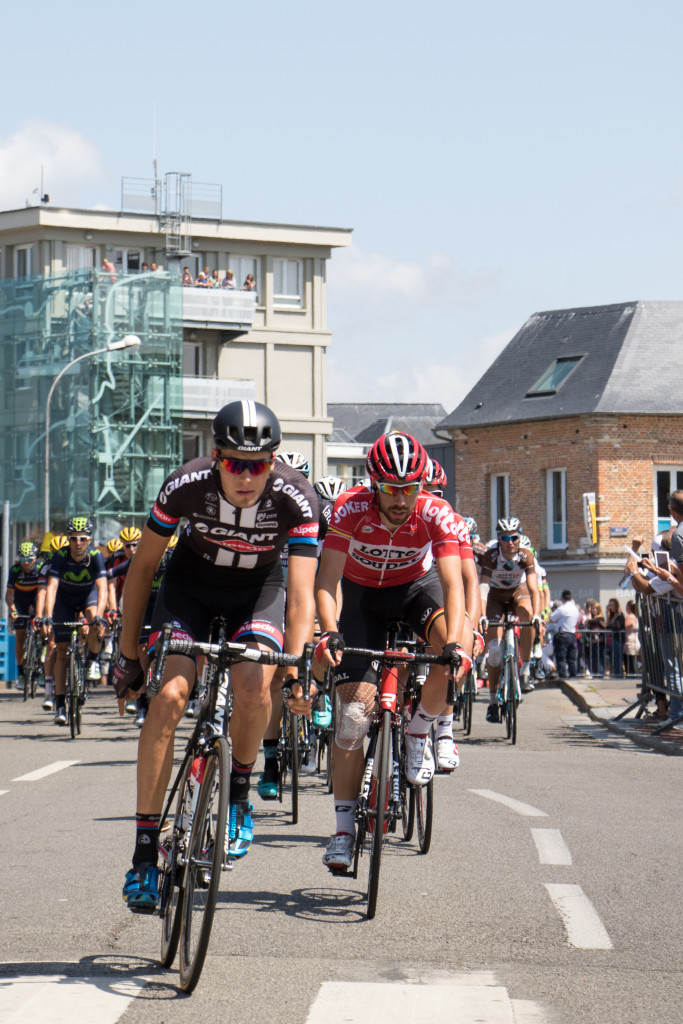 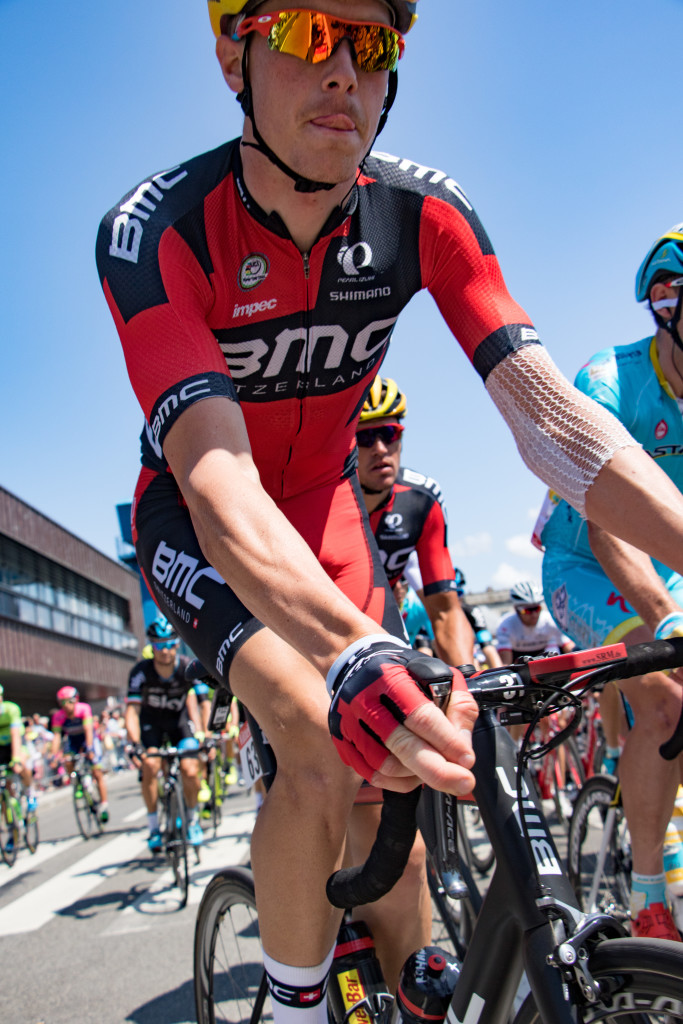 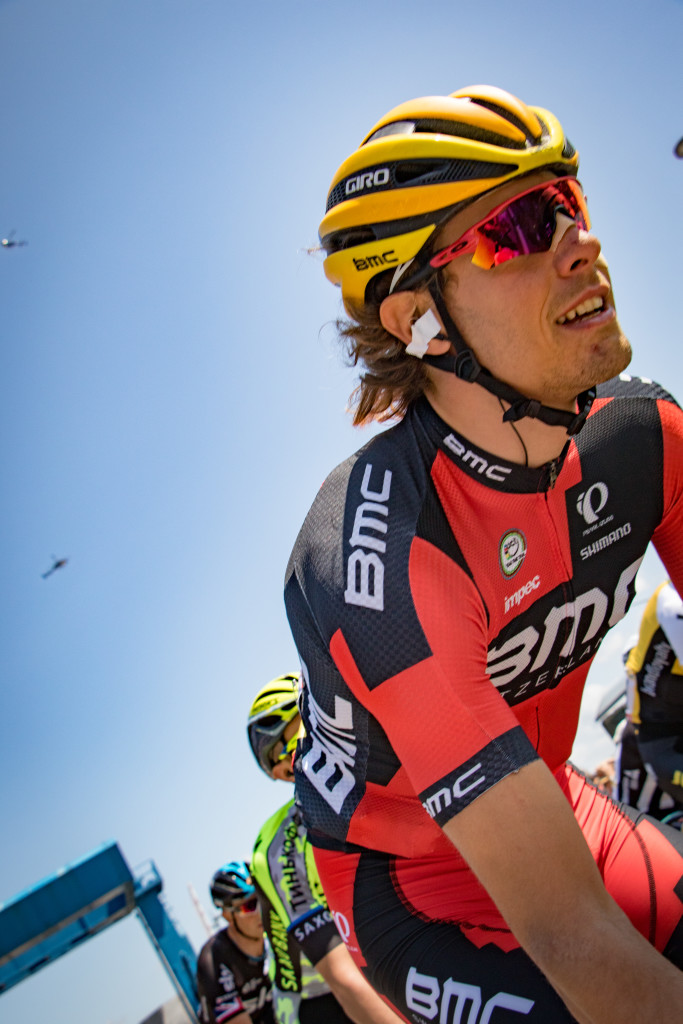 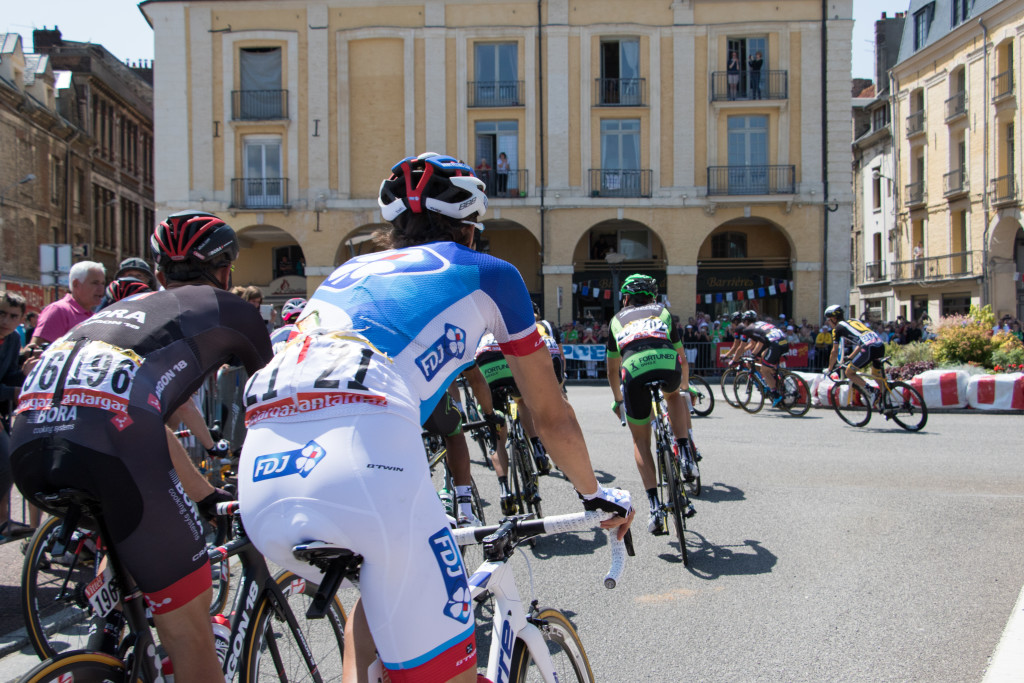 After Dieppe, I tried for one more stop. Despite potentially setting land-speed records, I arrived at the next town of St. Aubin-sur-Mer after the break had already passed. A round of uninspired photos of the peloton later, and it would have been impossible to catch the race at another point on course. I decided to cut ‘losses’ and head for the finish. But what a finish!

As the pack wound up before the Côte d’Ingouville, there was a crash at about 1k to go. Several riders went down, including yellow jersey’d Tony Martin and catching the likes of Tejay van Garderen (BMC), Vincenzo Nibali (Astana), and Nairo Quintana (Movistar) along with him. By occurring within the last 3k, downed/delayed riders are at least awarded the same time as their group, but the fight for the stage win was down to a reduced selection of riders.

Waiting in the photo area, the lead riders emerged from around the final bend, with one well ahead of the rest merely fighting for second! With time for an excellent post-up… 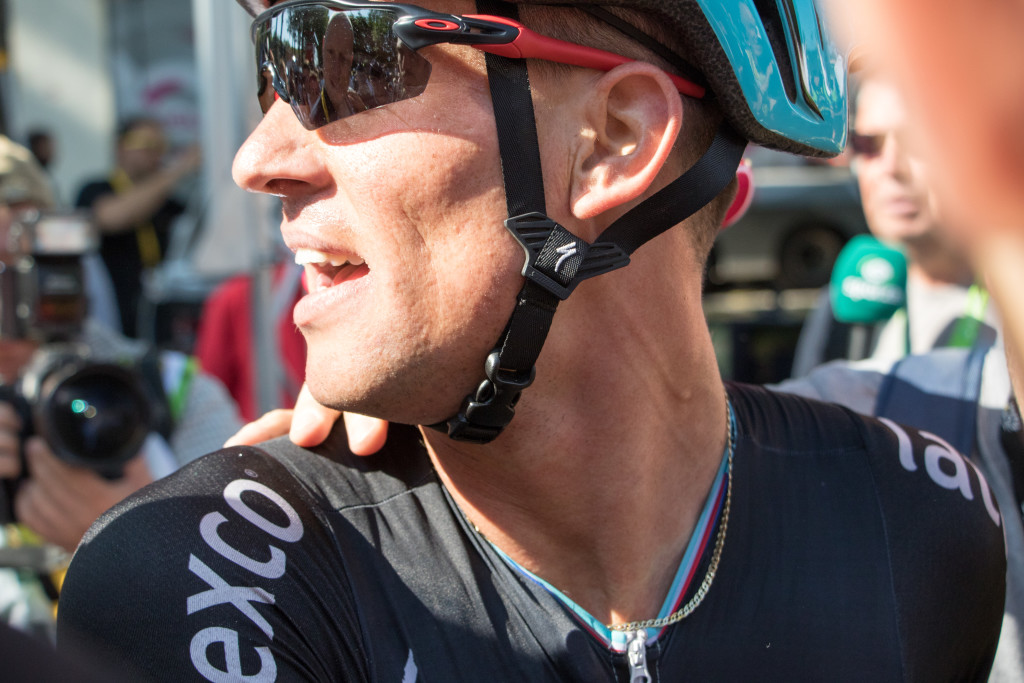 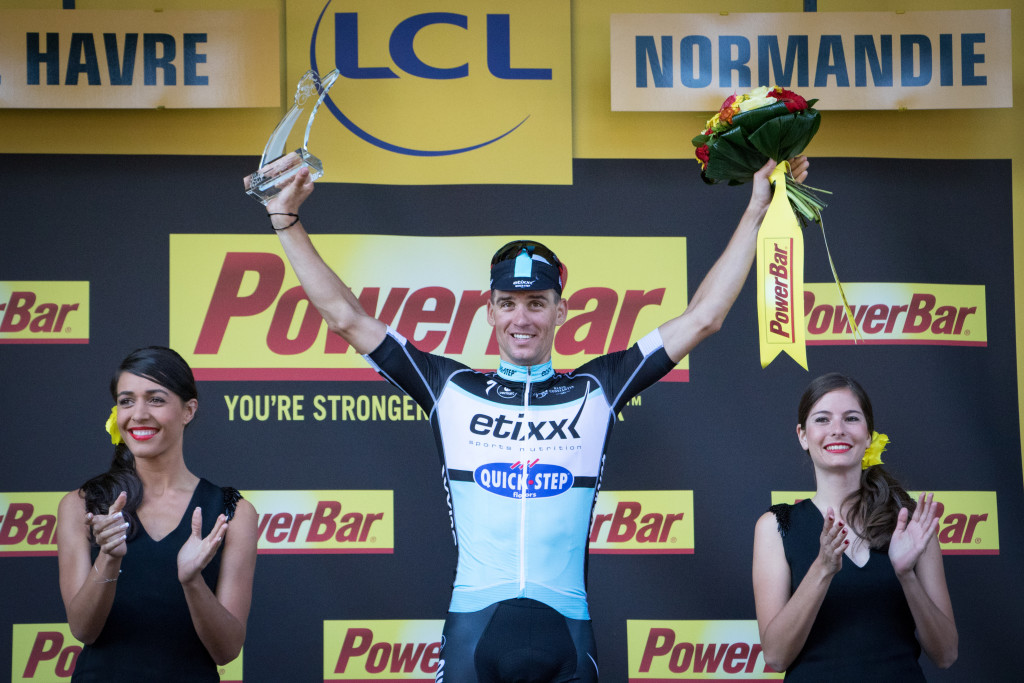 While the green and white jerseys remain the same, there was a (small) shakeup in the climber’s classification. After all day in the break, and raking in all 3 available mountains points, Daniel Teklehaimanot is now the leader for the climbers jersey! At only 3 points, it’s hardly anything towards the overall mountains classification, but just wearing the jersey is quite the accomplishment for Teklehaimanot, the first black African to race the Tour de France. 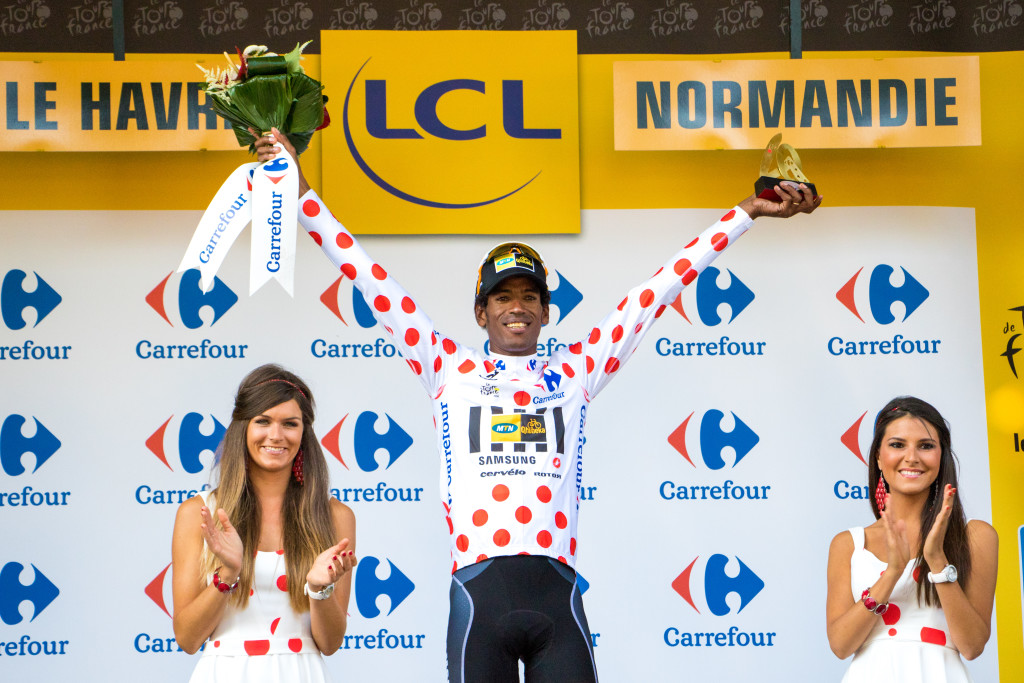 But all was not well for the yellow. After tending to his injuries, Tony Martin arrived at the podium last for jersey presentations. 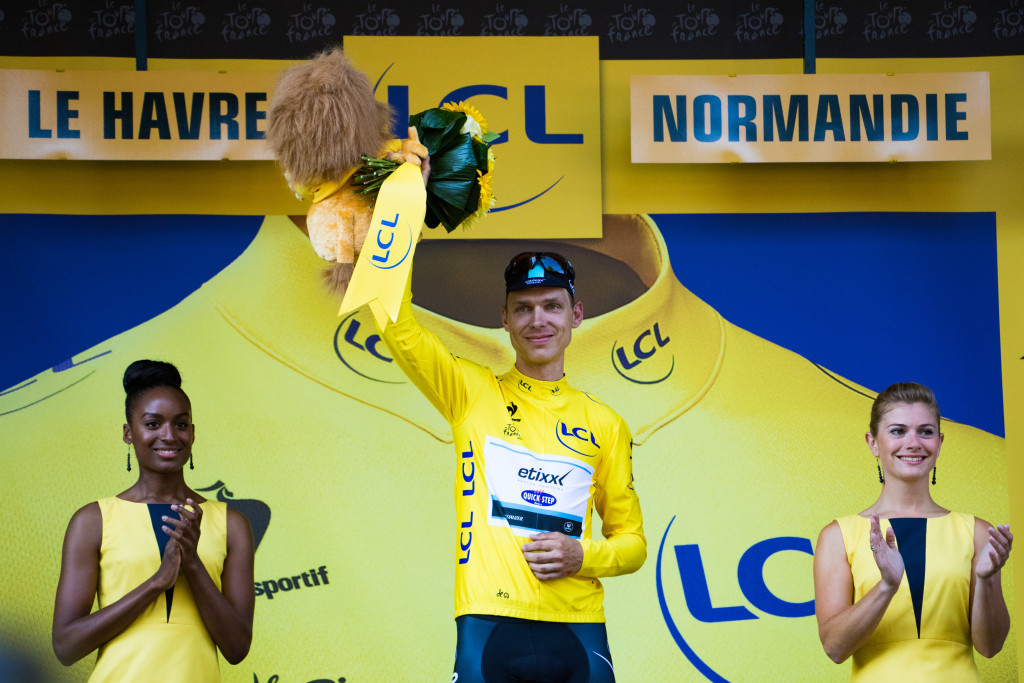 Arriving on stage with the jersey already on (not donning it on stage), and holding his arm to one side, there was only one possibility: broken collarbone. As confirmed by Martin later on twitter, he indeed suffered a fractured collarbone in the crash, and won’t be starting tomorrow’s stage.

Another amazing day on the tour, marred by another terrible one for the yellow jersey. We try again tomorrow, on a rolling stage from Livarot to Fougéres.

*Unless there’s a lovely backdrop like in Antwerp, or there’s new riders wearing a given jersey, the starts are largely the same. Gotta do something to keep it interesting.