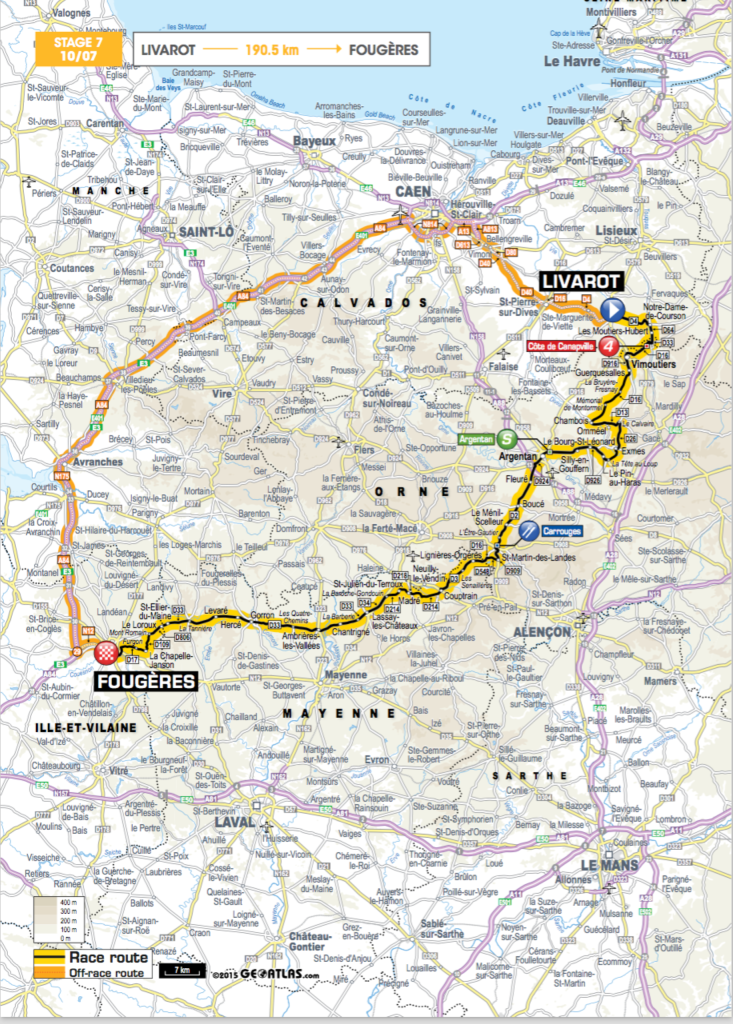 In light of the drama, crashes, and weather over the last few stages, I am unreasonably happy to report that stage 7 was your average, run of the mill, Tour de France sprint stage. Weather was warm but not unbearably hot, breezes were light, the course was gently undulating. With only one cat-4 climb just after the start, this is the last day for a while that the pure sprinters will have a chance at victory. Besides the TTT on Sunday, a rollingly hilly stage 13, and Champs-Élysées, the riders will be seeing a LOT of mountains in their future, and the sprinters will be seeing a lot of time in the grupetto.

At only ~2,200 inhabitants, one would think that Livarot would be a little on the small side to play host to a Tour de France start. While the roads into town are limited (particularly if you’re approaching from the closed race-route side), once you do make it into town, it’s actually pretty quaint, and an exceptional host. 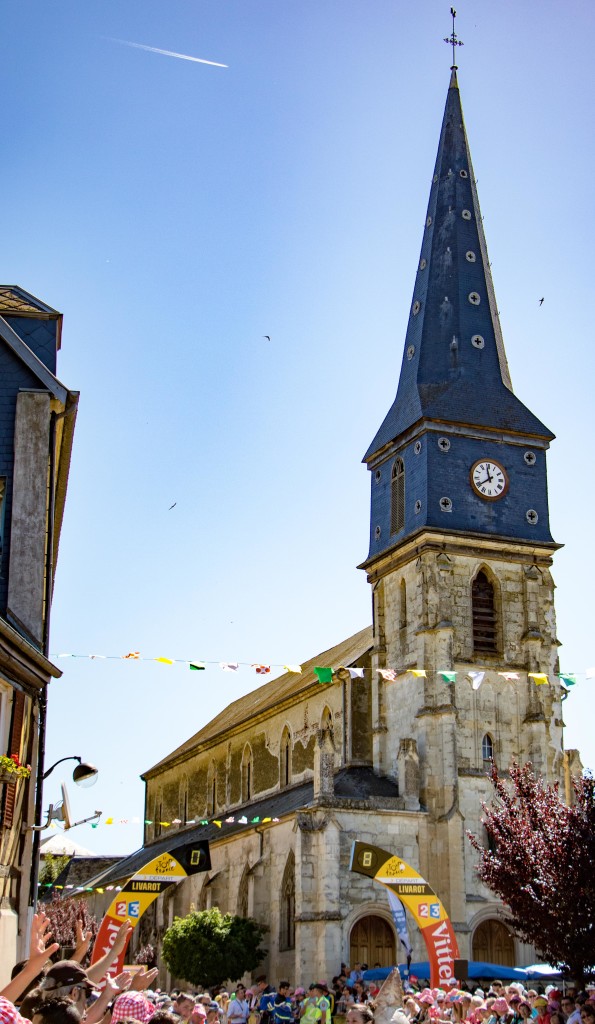 The Livarotais (yes, that’s what they’re called) certainly got into the spirit of things. 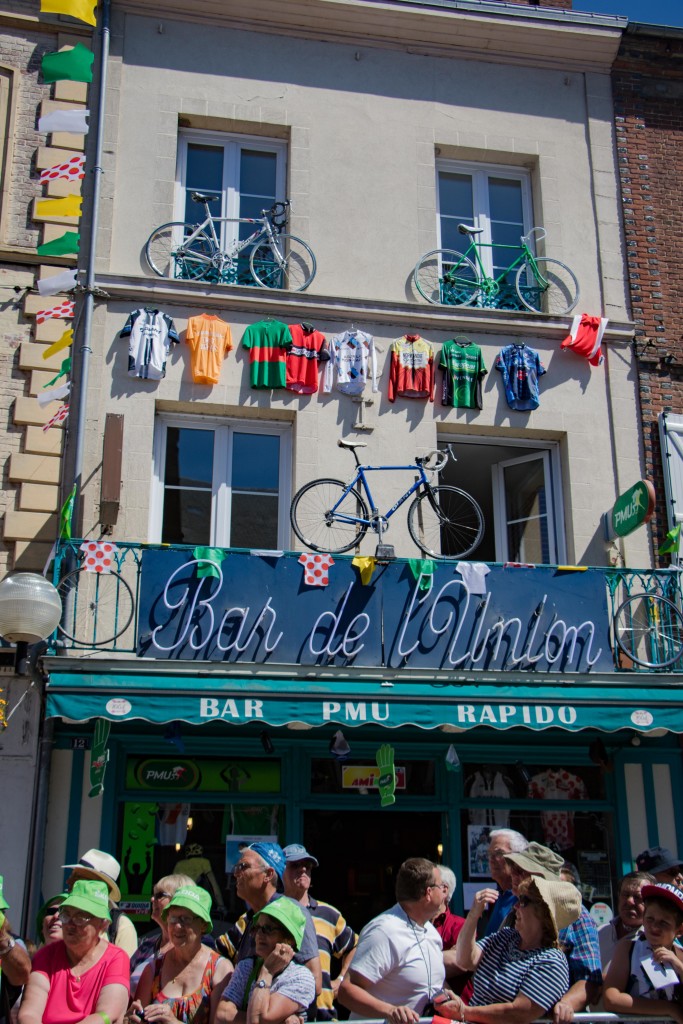 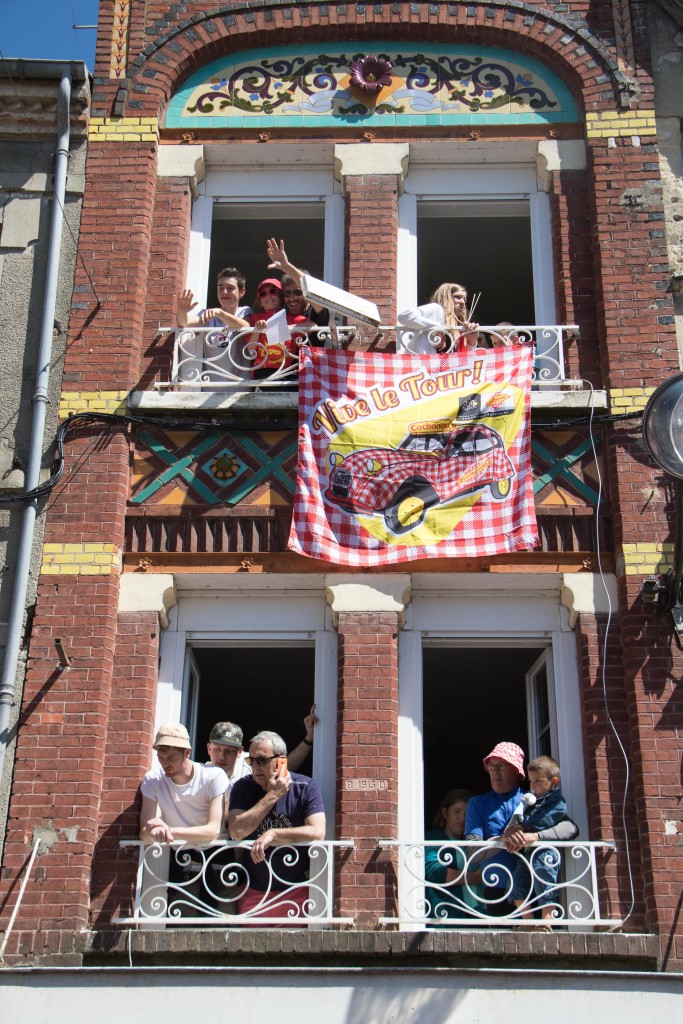 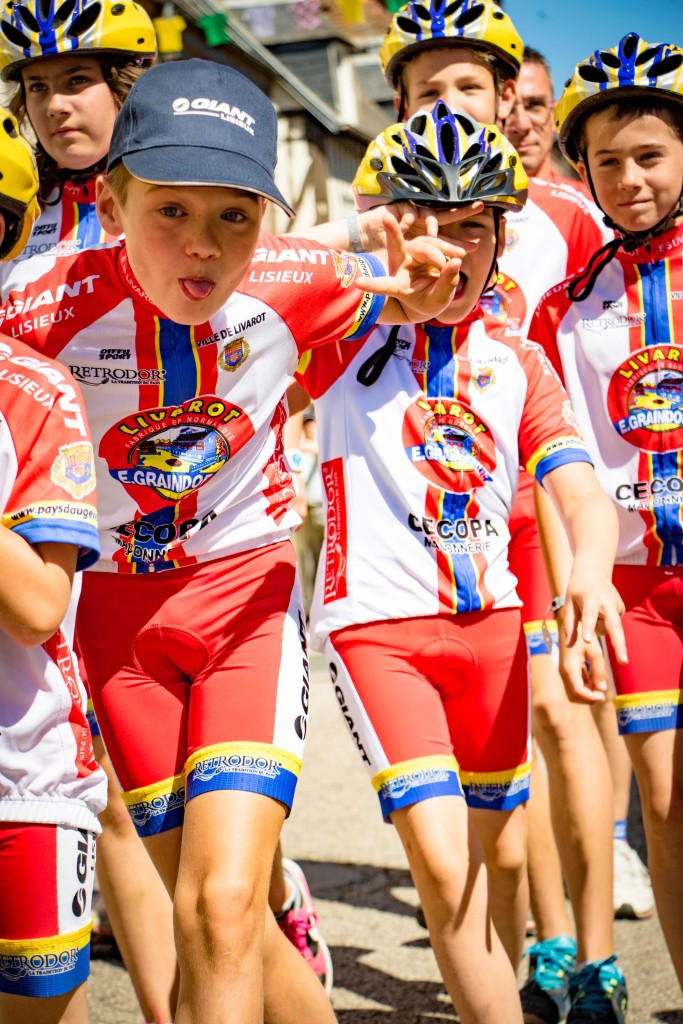 For the riders, though, it looked like it was going to be a straightforward day.

At the sign-in area, riders were the most relaxed I’ve seen them yet. 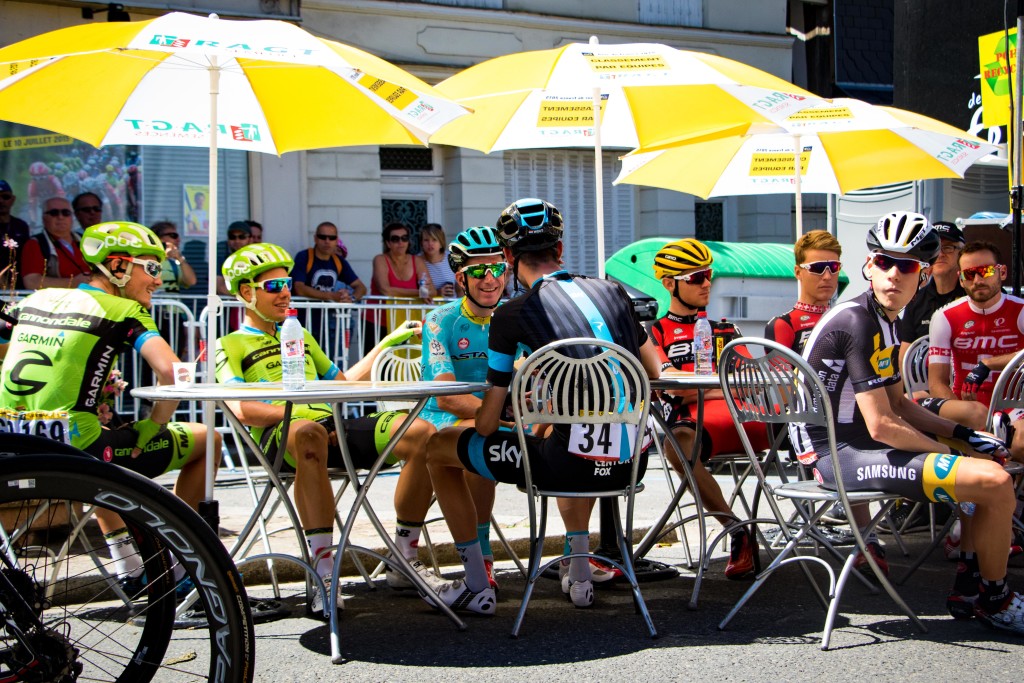 However, after Tony Martin’s (Etixx-Quickstep) withdrawl yesterday there was no yellow jersey present for the sign in. Chris Froome was virtual-leader all day, but would have to wait until Fougeres to wear the jersey again. 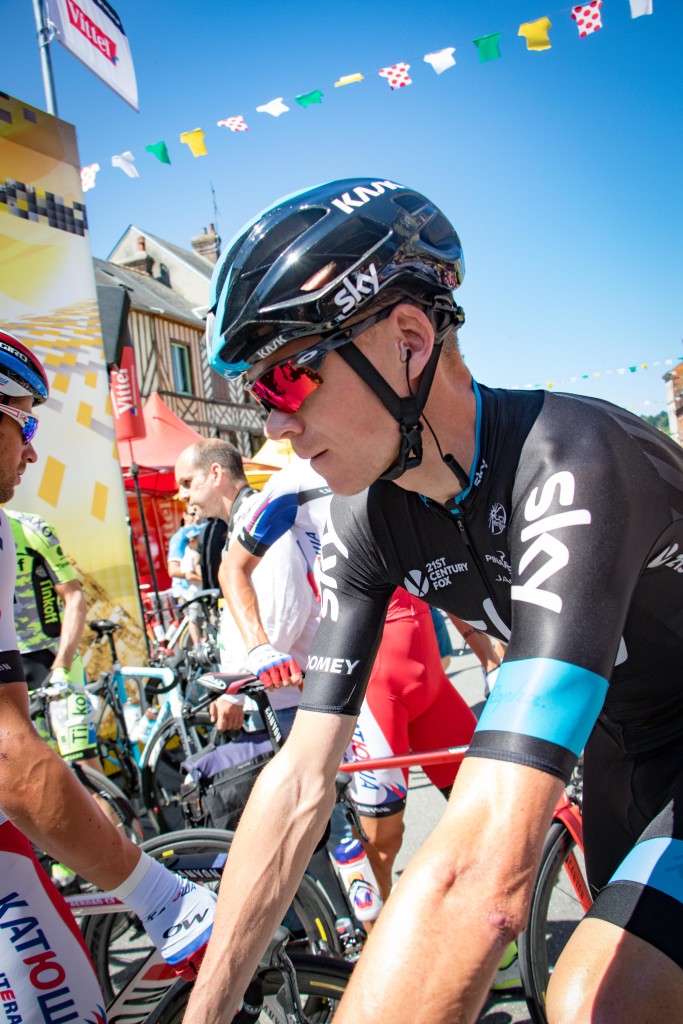 Like stage 4 – no photos of the start line today, as the day’s itinerary involved a lot more driving to hit several photo stops along the stage. Aside from photos of the race itself, today afforded more opportunities to stop and observe the human condition that is the Tour de France spectator.

Straight away leaving the start, I came upon a flock of VIP-viewing-experience helicopters. While zipping around in a helicopter like a boss does sound alluring, I can’t imagine it’s a way to REALLY see the race without also watching a live feed. And then, what’s the point?… 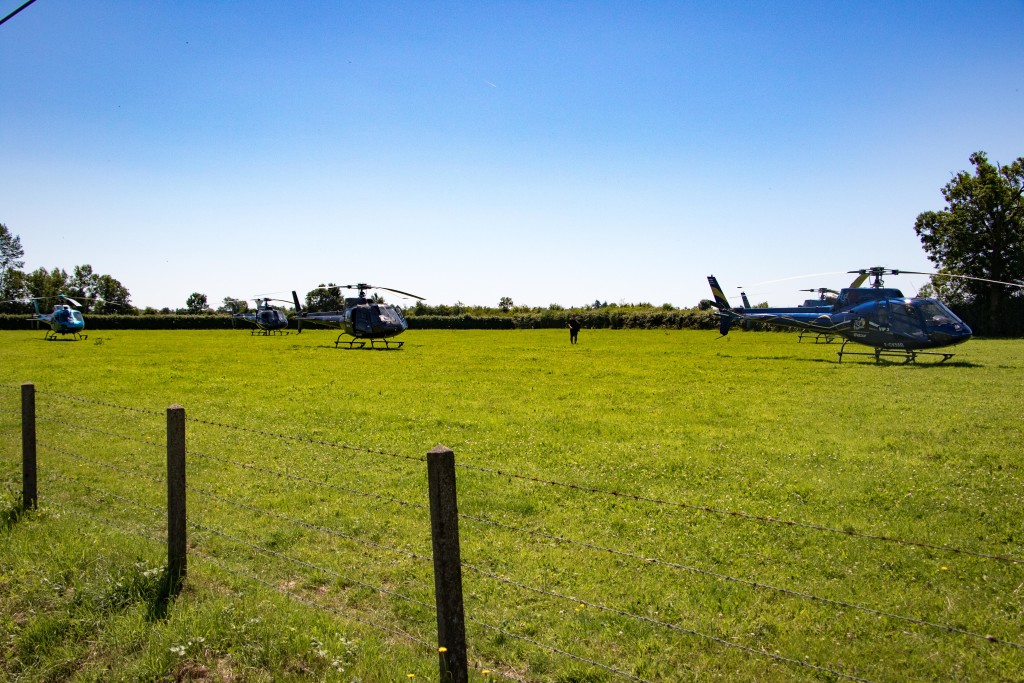 This. This is how you spectate a race. With friends and family and neighbors, on the side of the road, with camper vans and probably an adult beverage or two. Found here just outside of Canapville, but at virtually anywhere else along the course. 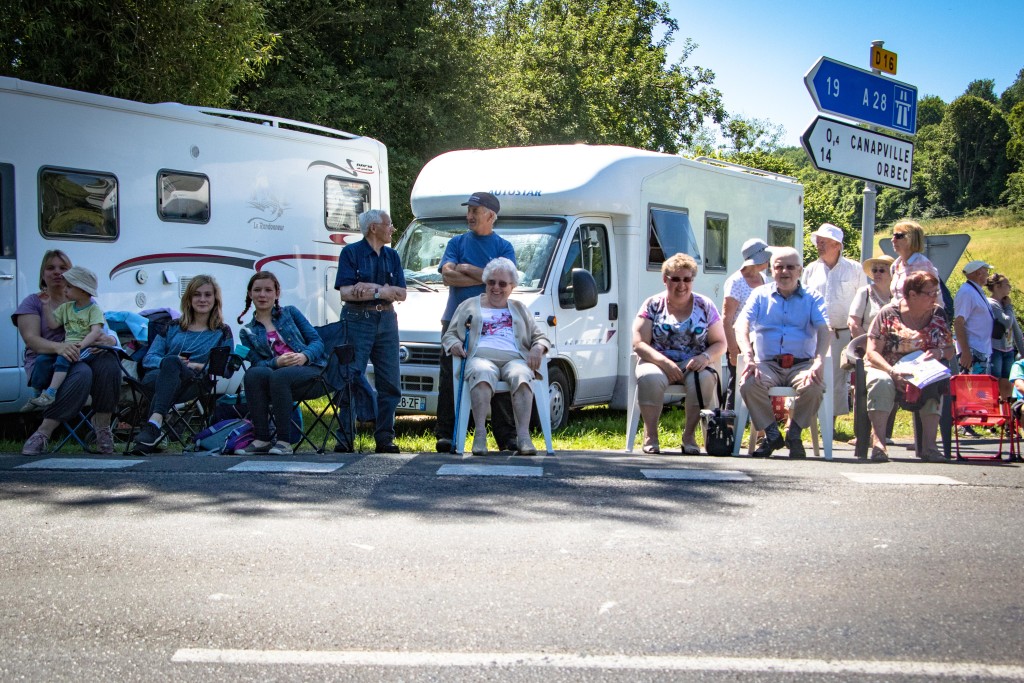 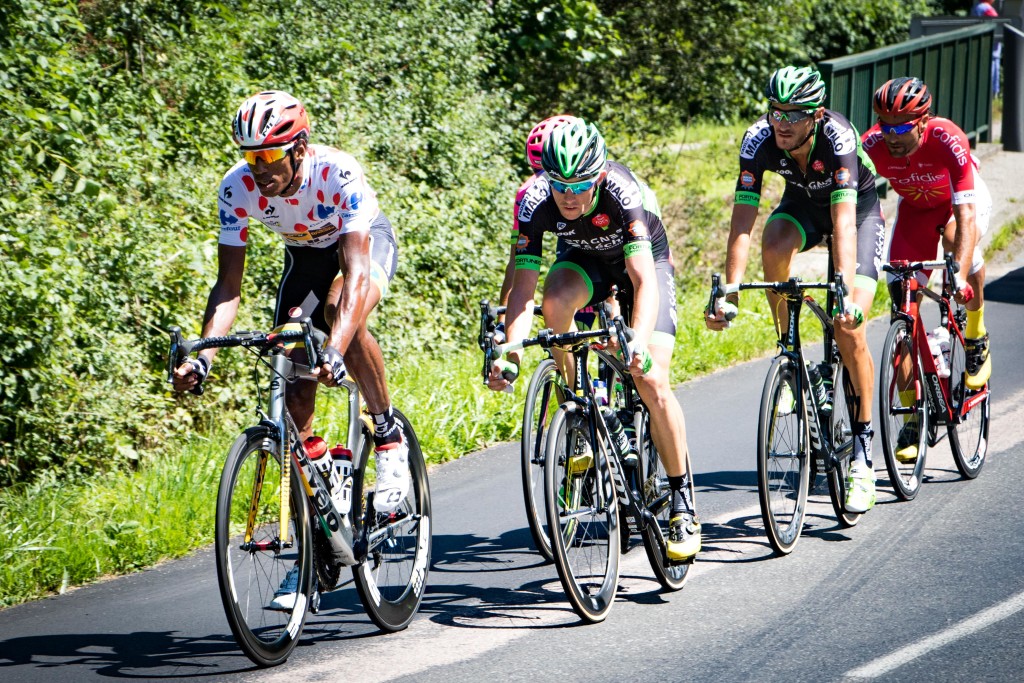 A few minutes later, the pack rolled by, with Etixx-Quickstep, Lotto-Soudal, and Sky policing the front. 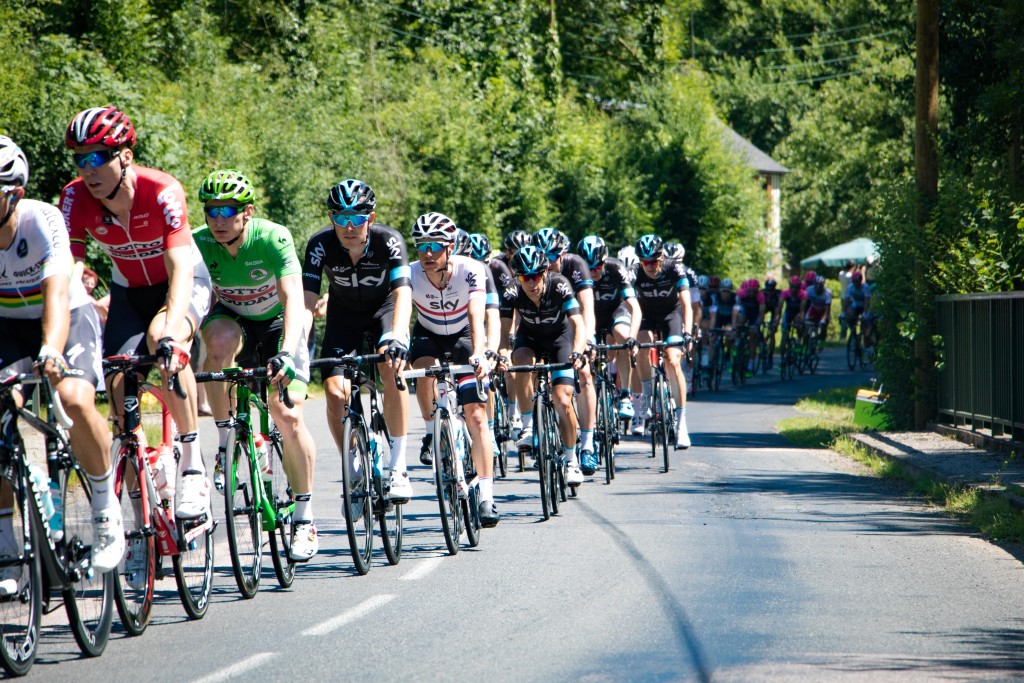 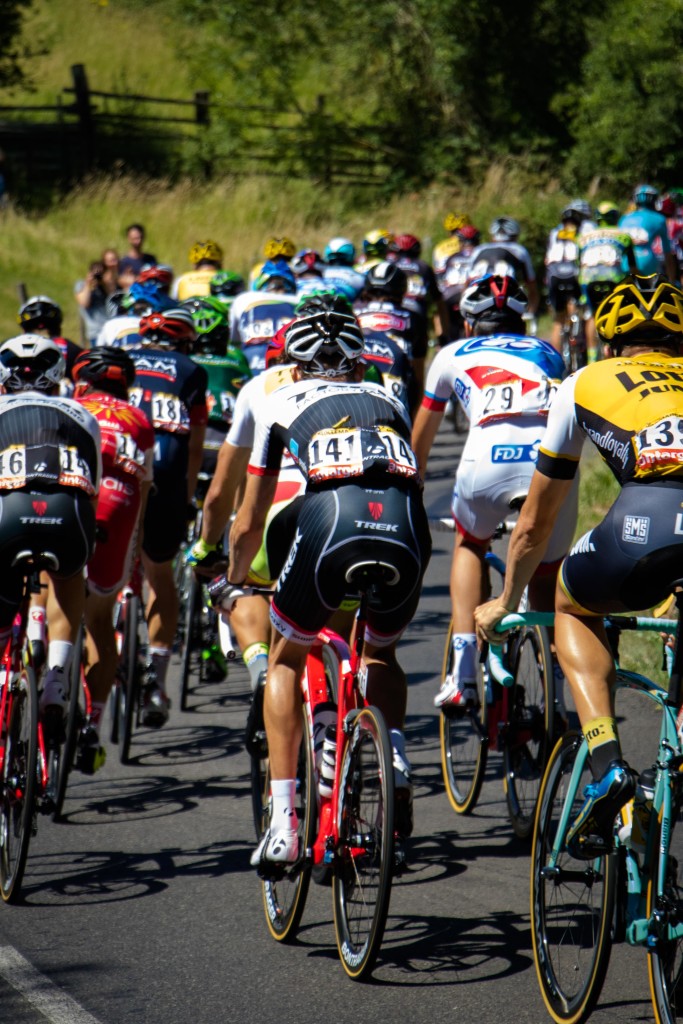 Back in the car, it was on to the next town to shoot – Le-Bourg-St-Leonard. As I arrived, parked the car for a quick getaway, and scouted the area for a shot, I heard “monsieur, un photo! Un photo!”

Again, the race rolled by, breakaway still doing their thing. 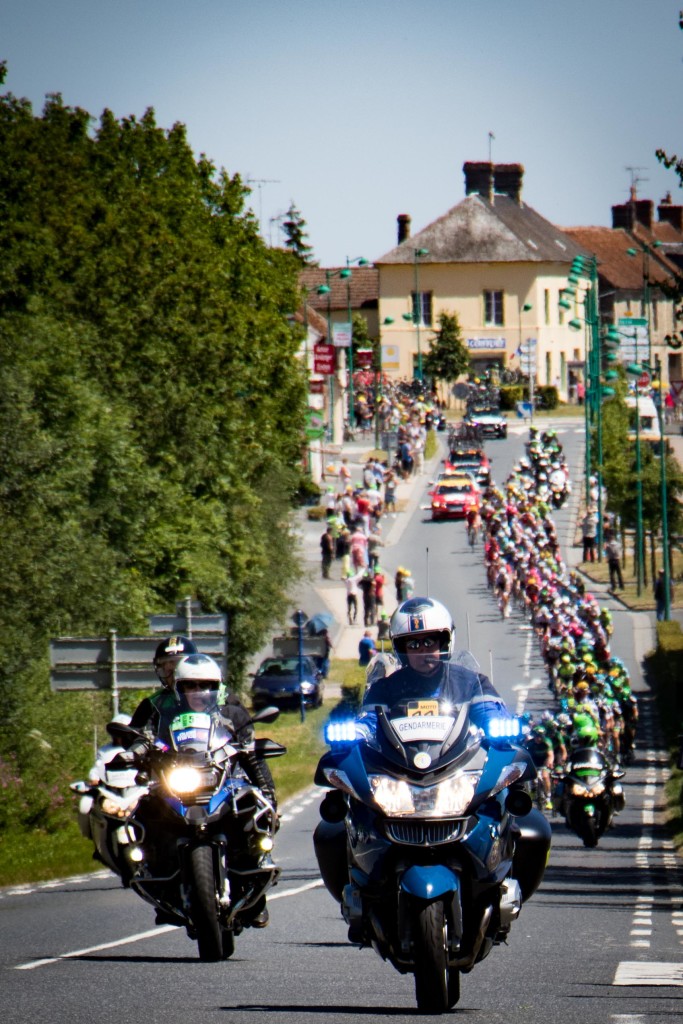 AH! Things are happening! Things that I’m around to photograph. I didn’t see what exactly kicked the bunch into gear, or if was Sky, Lotto-Soudal, and Etixx-Quickstep turning screws to make the catch, but the pack was actually strung out as they passed. 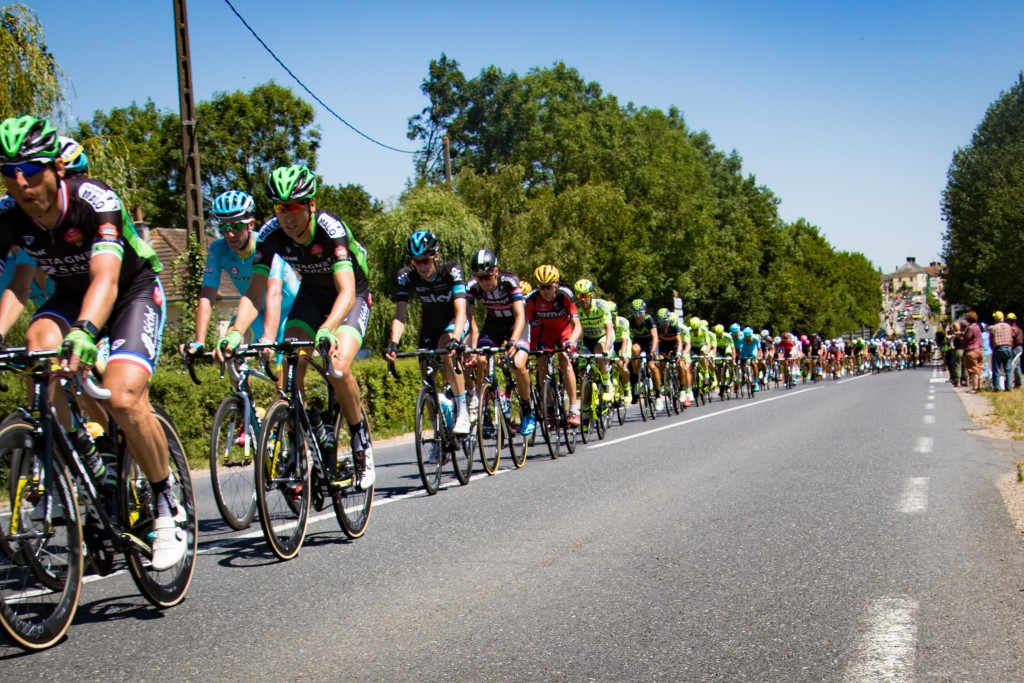 Back to the car and on to the next photo spot: Couptain!

I roll ahead of the race and dip onto the course to set up for the final shots before the finish. Along the way, more portraits of what it means to be a spectator at the tour: 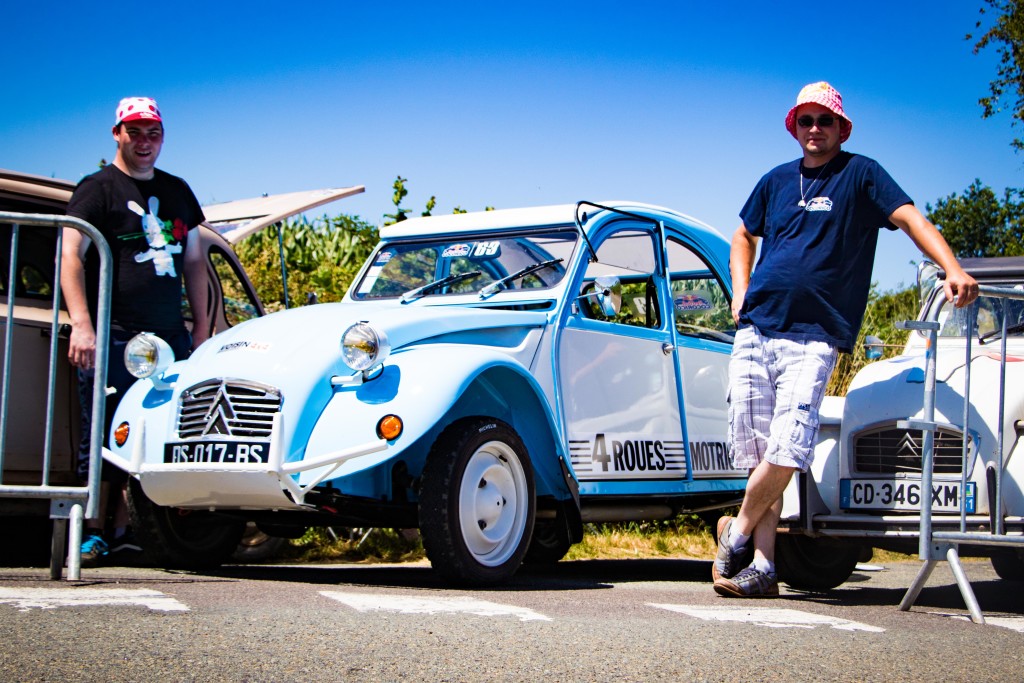 I arrive in Couptain. It’s quaint, just like Livarot. As the break passes, it’s business as usual, working smoothly together. 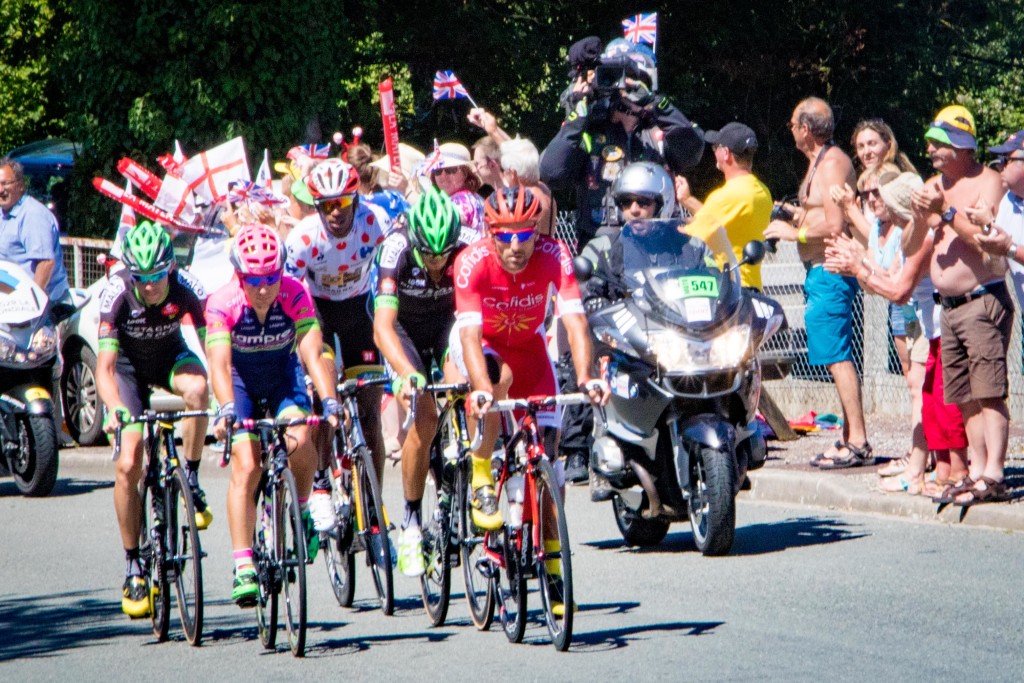 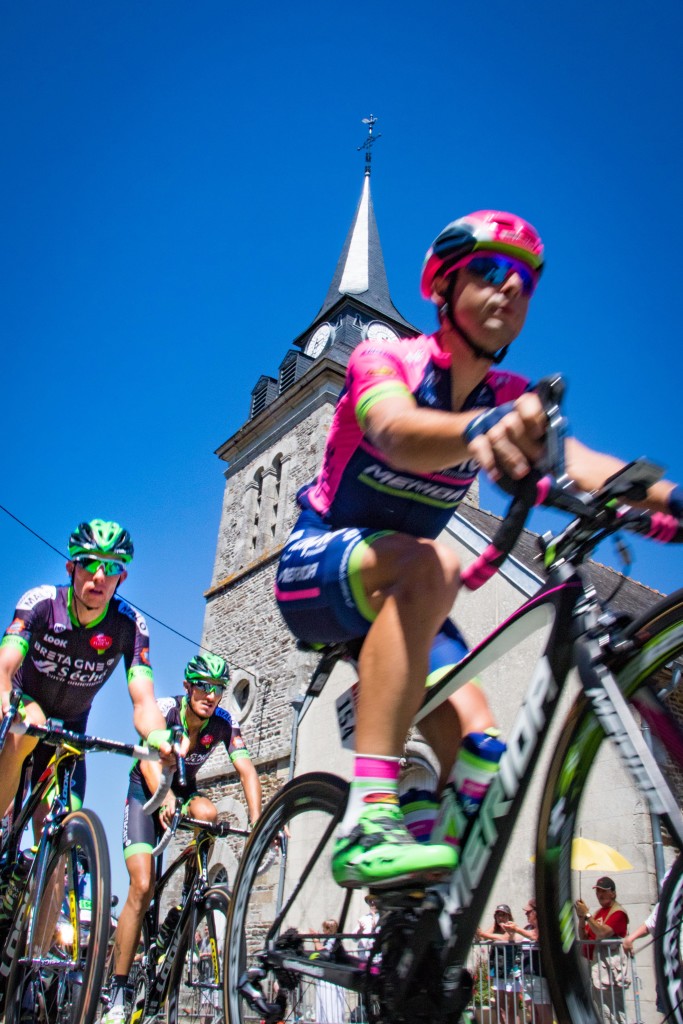 But the pack is close at hand. Wheel-suckers, repent! 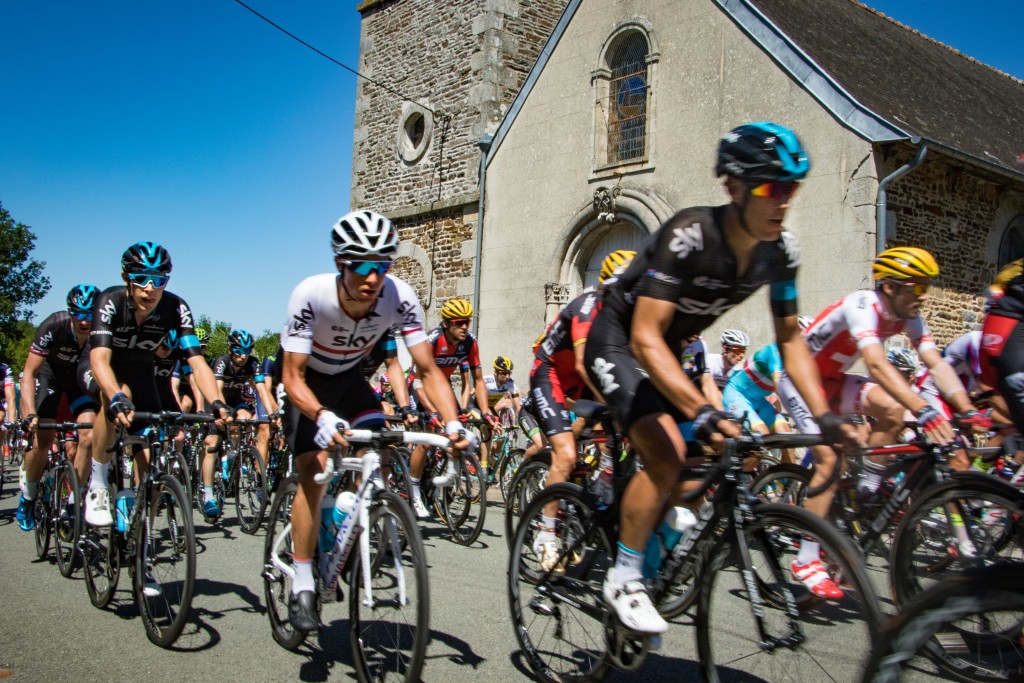 As the catch happened not too long after that, I made my way to Fougeres for the finish. I’m out of view of a big-screen, and only catching half of what’s being announced on the PA. I wait in the photo-area, with only the last few meters visible past a bend.

Fans begin to cheer and pound the barriers. A second later, from around the corner…. 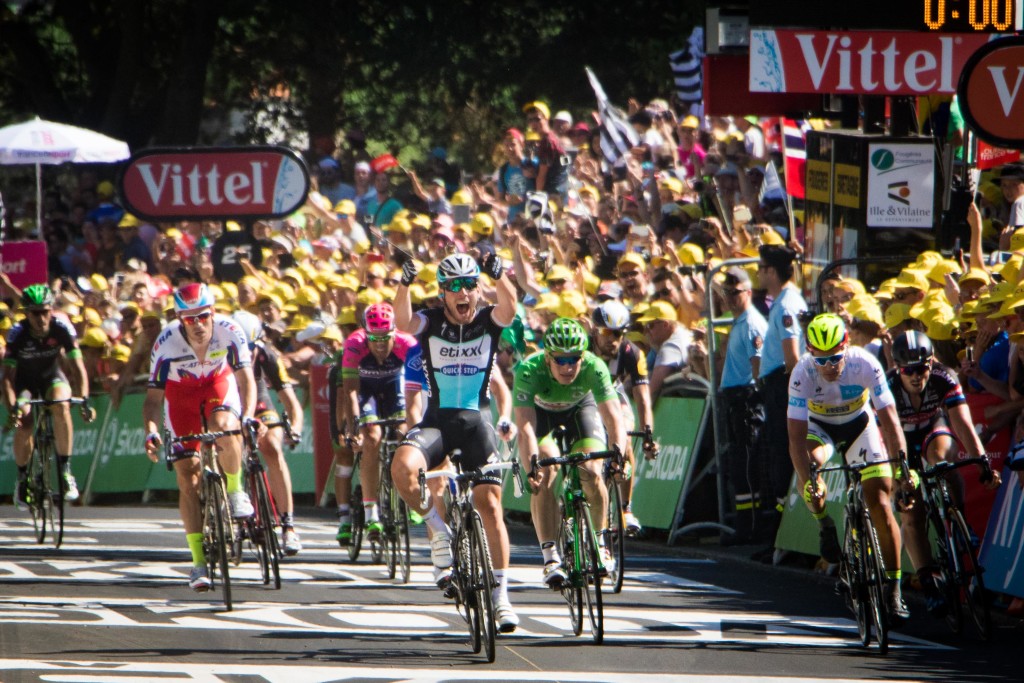 MARK CAVENDISH (Etixx-Quickstep) TAKES THE WIN! Back to back wins for the Etixx boys, and a much delayed win for Cav at this year’s tour.

After being generally sulky for the first few days, Cav was brimming as he made his way to celebrate with each of his teammates as they crossed the line. 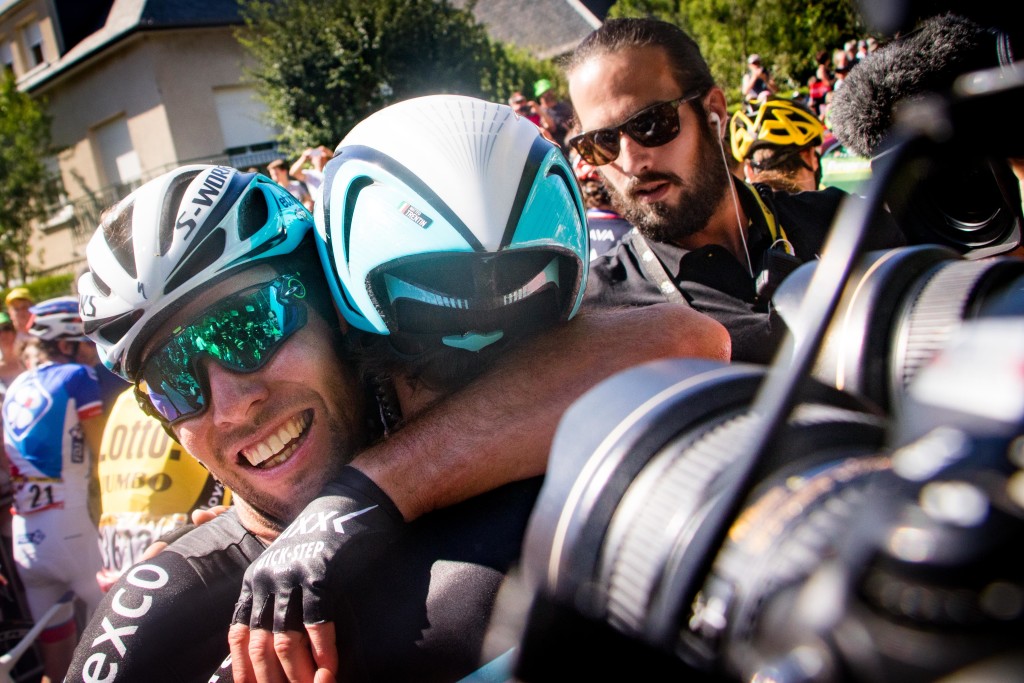 Elsewhere at the finish, I caught Thomas Voeckler (Europcar) mid-interview, with the light just-so. 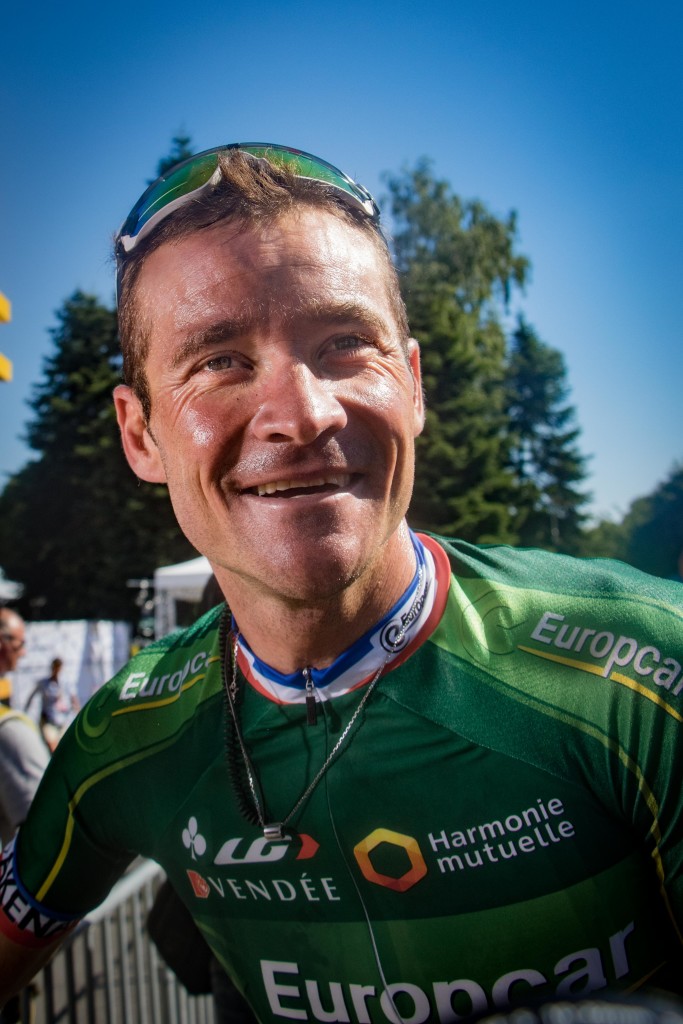 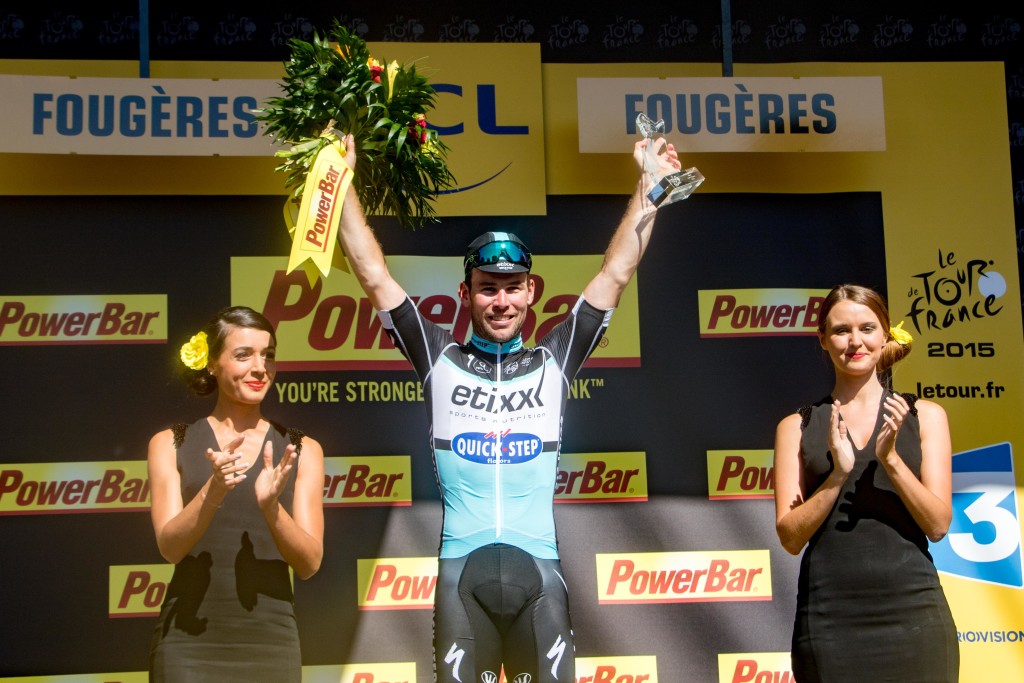 Tomorrow’s stage heads west from the beautiful city of Rennes* to Mûr-de-Bretange, with a 2k, 6.9% average cat-3 climb to the finish line. Should make for an exciting finish, and the puncheurs who lost out on the Mur de Huy will be looking for a second chance.

And finally: this is the second to last update for me here at the Tour – Sunday I fly back to the States. Unless anyone wants to lobby my boss for me to stay more, or hire me full time as a cycling photographer. Either or. I hope you’ve been enjoying thus far, and I’ll do what I can to absolutely smash it with coverage tomorrow.

View all posts by Sean Roach