Editor’s Note: John Kavouris finishes his exclusive coverage of the Tour for In The Crosshairs. It has been great having John on board and we hope to have him back during the cyclocross season for more coverage. Please let us know what you thought of our “offseason” coverage. Tweet at us at @CXHairs. Or send an email to CXHairs@gmail.com. And please, follow John and give him a virtual pat on the back at @JohnKavouris on Twitter and Kavouris on Instagram. All photos © 2015 John Kavouris.

Early morning overcast skies broke very quickly, for another gorgeous day of bike racing through the Brittany region of France. You couldn’t forget that we’re in Brittany (Bretagne, in French), because the flag of Brittany is EVERYWHERE. Not familiar with the flag of Brittany? You’ll figure it out pretty quick from the photoset. But right. Bike racing.

Out of Rennes, the course would roll through more French countryside of wheat fields, wind turbines, a single cat-4 climb, and sprint point, before an exciting finish on the Mûr-de-Bretagne. 2k at a 6.9% average sounds not terrible for pros, but there’s more to it than that. For ~1k, the climb averages above 9%, finally leveling off to ~5% down to ~3% over the last kilometer to make for a tough finish.

In Rennes, it’s clear that riders are getting over the first week nerves and beginning to relax. Compared to the past few days, there were pros everywhere in the hospitality village: 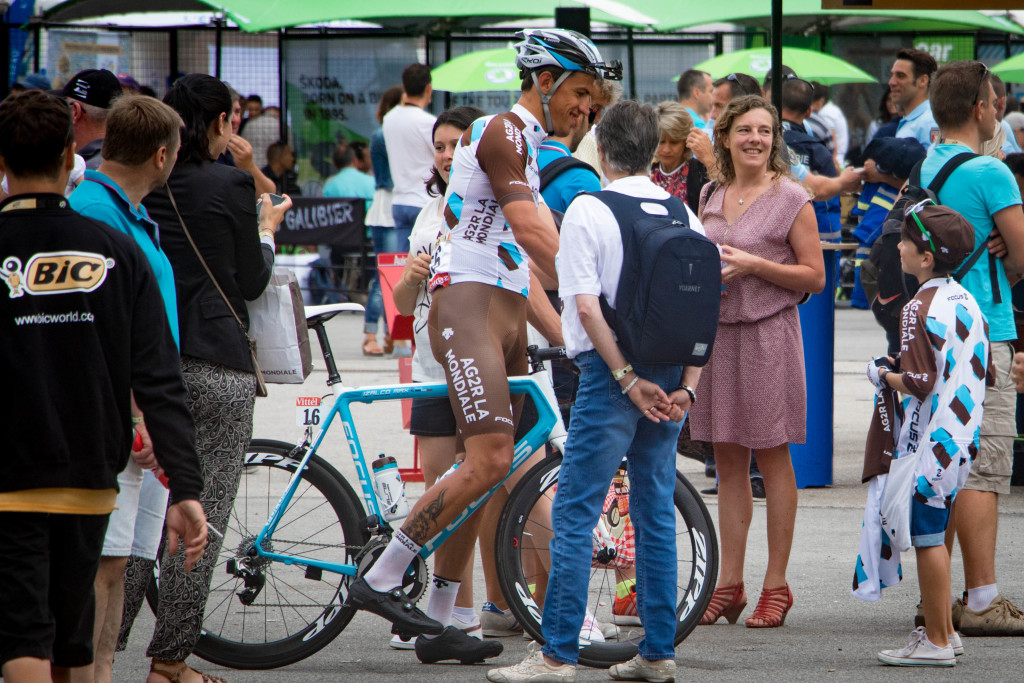 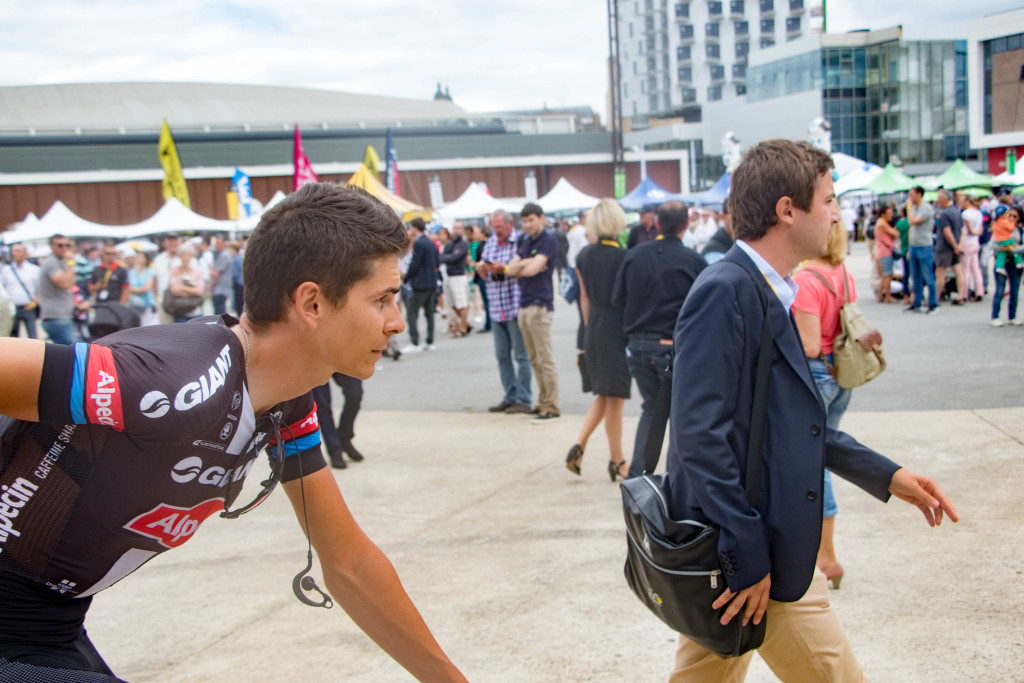 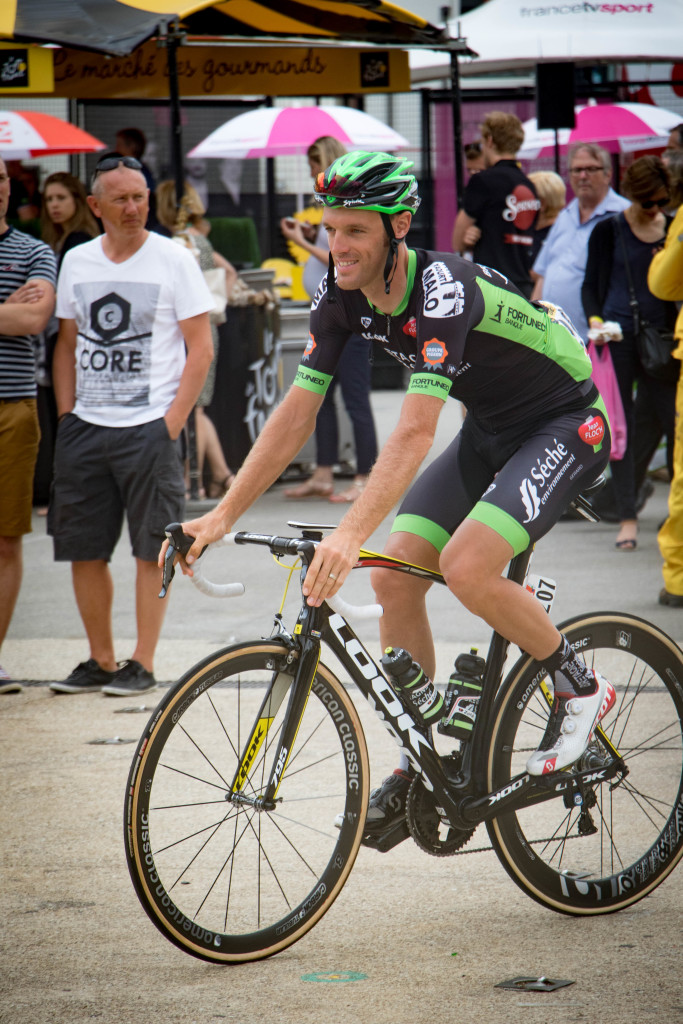 Jakob Fuglsang (Astana) even took the opportunity to get some hairs cut at the BIC sponsor barbershop. I had a shave there a few days ago – they do great work, but I can’t imagine being “fresh haircut itchy” for 181k. 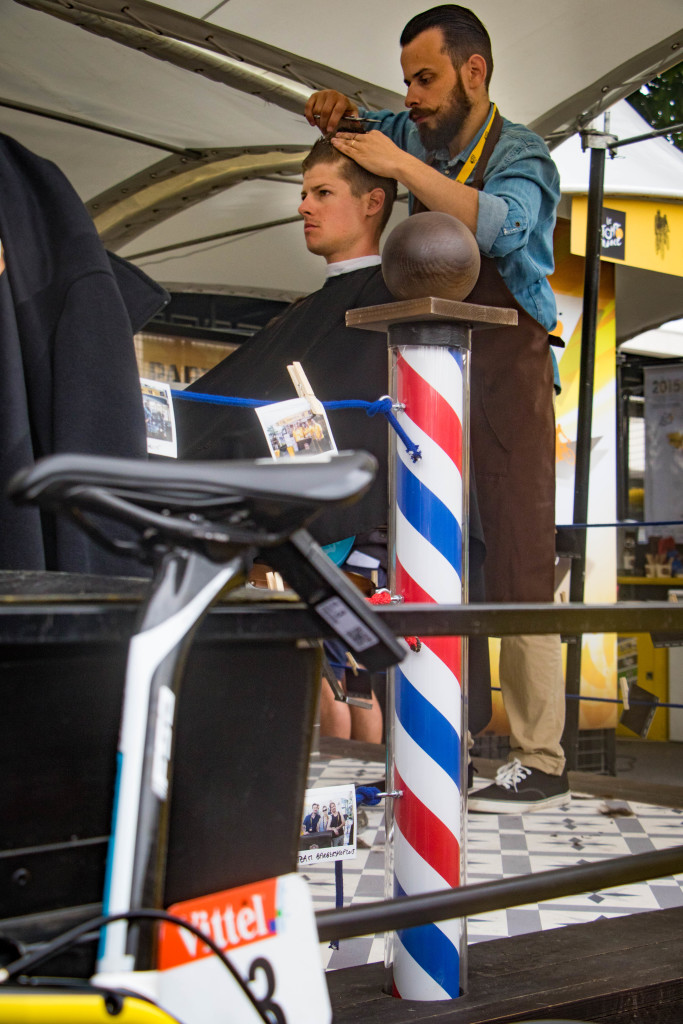 Even Cavendish was in a chipper mood from yesterday’s win, signing autographs, and even taking selfies with fans. 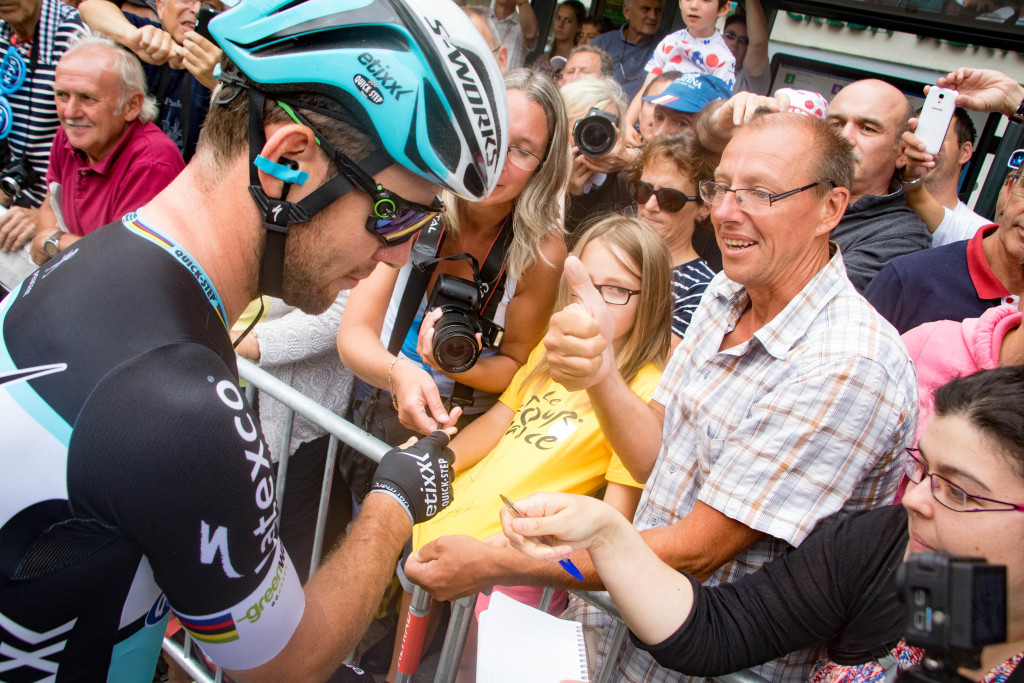 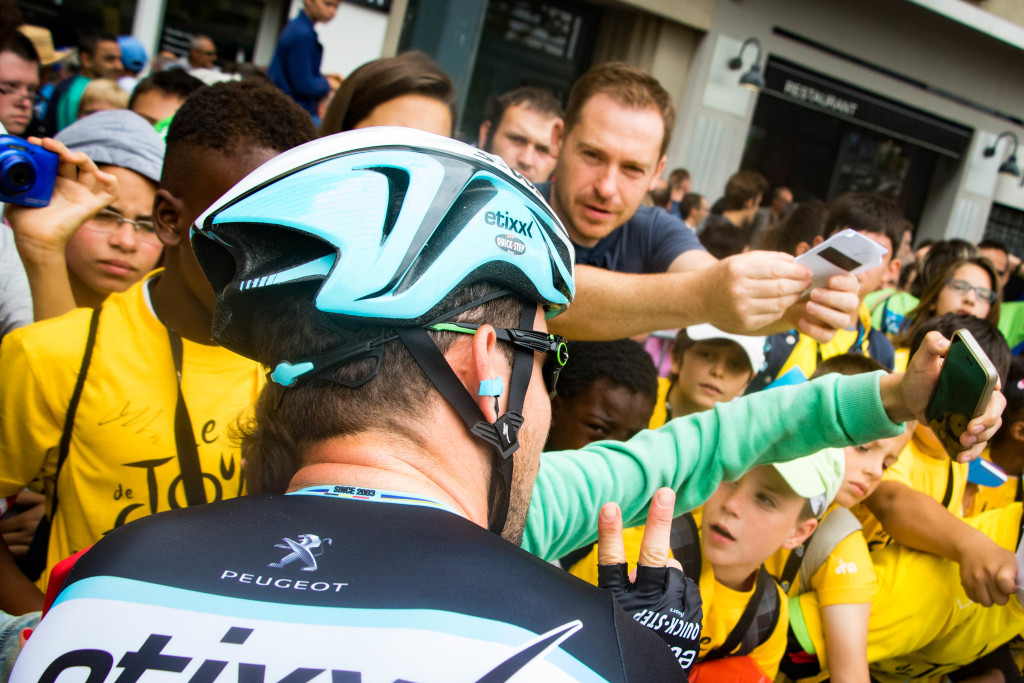 Elsewhere at the start, the Eritrean contingent was strong as ever. If you haven’t surmised, the MTN-Qhubeka riders are sort of a huge deal for African cycling on a global stage. These fans are out in force at every start, and along the route of each stage. 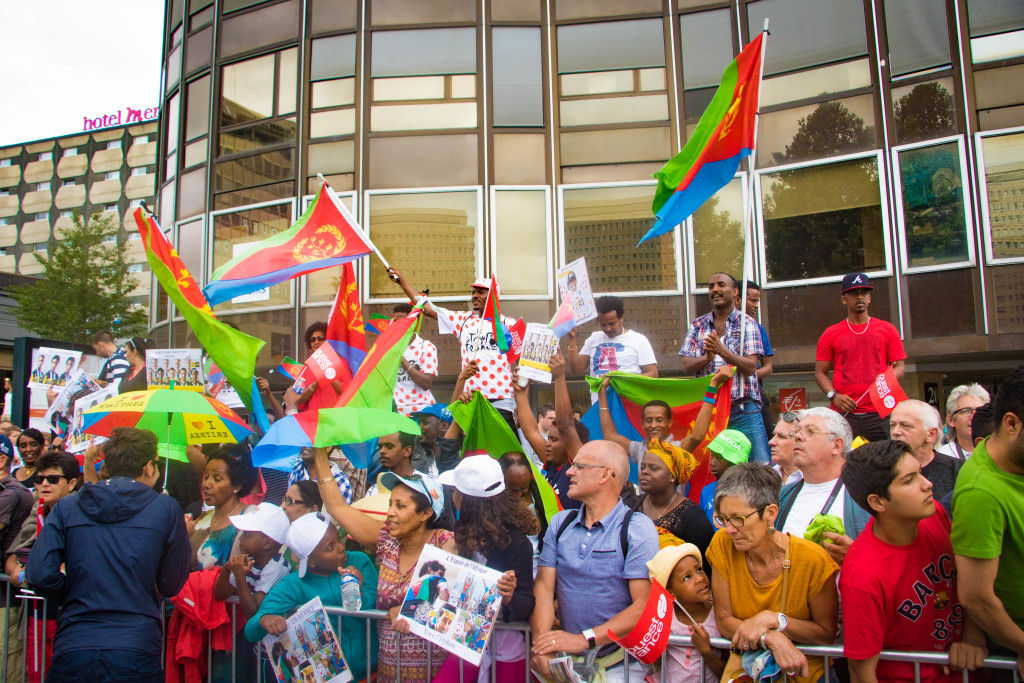 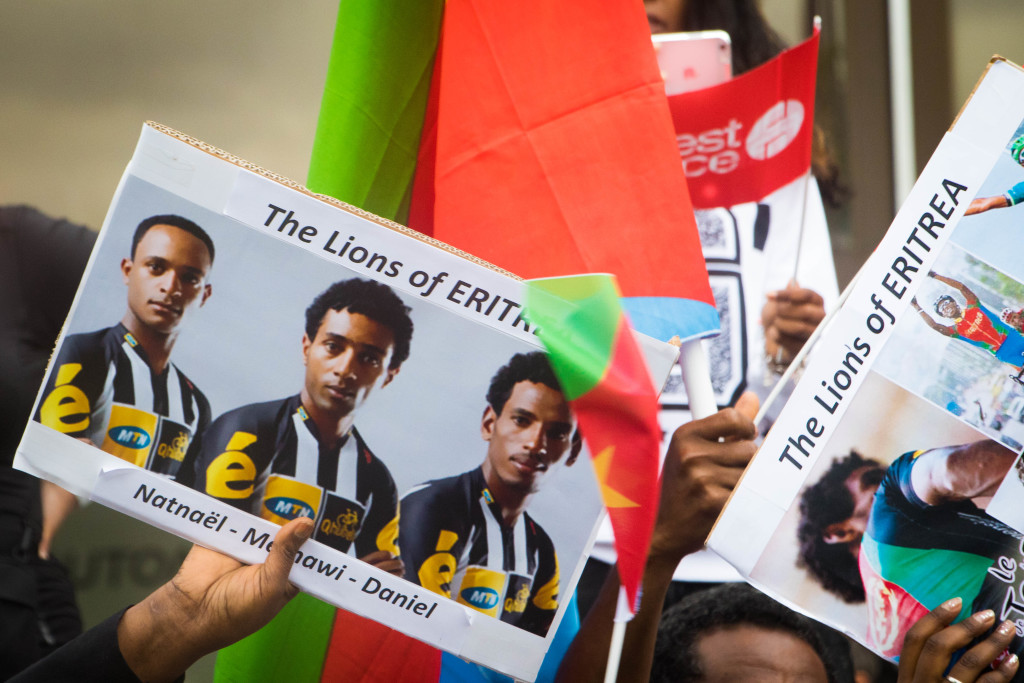 Speaking of at every stage – it’s the Canadians! Again!

I chatted with the Canadians some more today while they continued to rake in autographs. They’ll be here for the whole tour, and typically stake their claim near the sign-in area around 7:30AM. It’s typically just after noon when I see them. AND they can address just about every rider by name. These are some of the most dedicated fans I’ve ever encountered, and I would not be surprised if they manage to score a signature from every rider by Tour’s end.

While riders rolled off, I made my way to the first stop of two along the route: St-Méen-le-Grand. 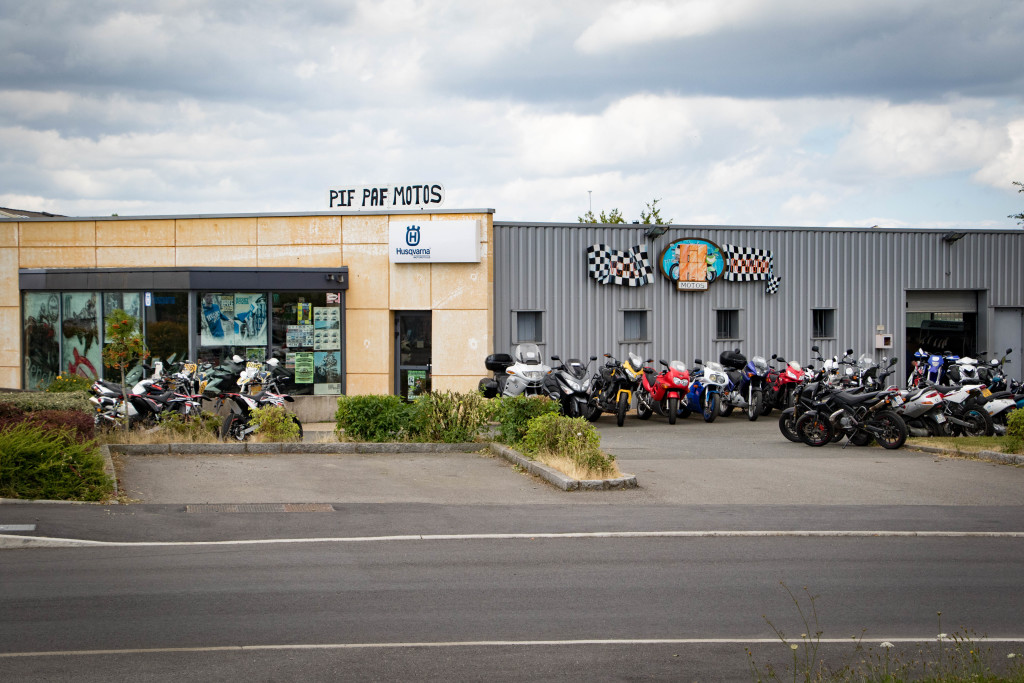 The race route ran next to a sort-of industrial park. I couldn’t discern which way the actual town of St-Méen-le-Grand was, but I was sure this wasn’t exactly it. Nevertheless, plenty of fans were out to watch the race roll by. 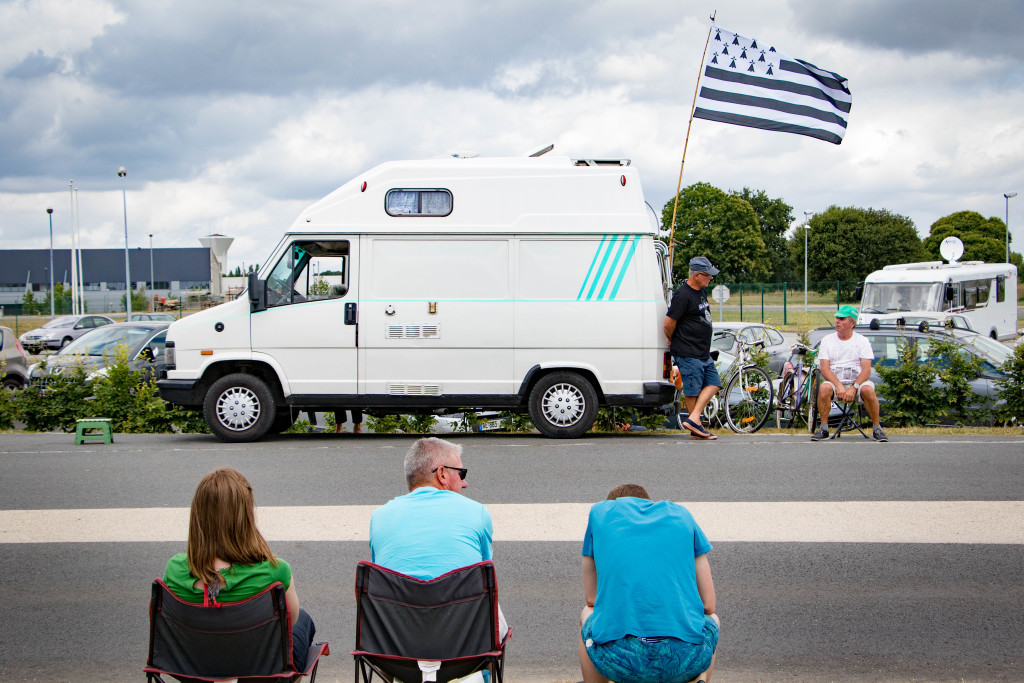 After scoping out the typical, if not uneventful, early day’s race situation, the next stop was the day’s cat-4 climb, the Col du Mont Bel-Air. 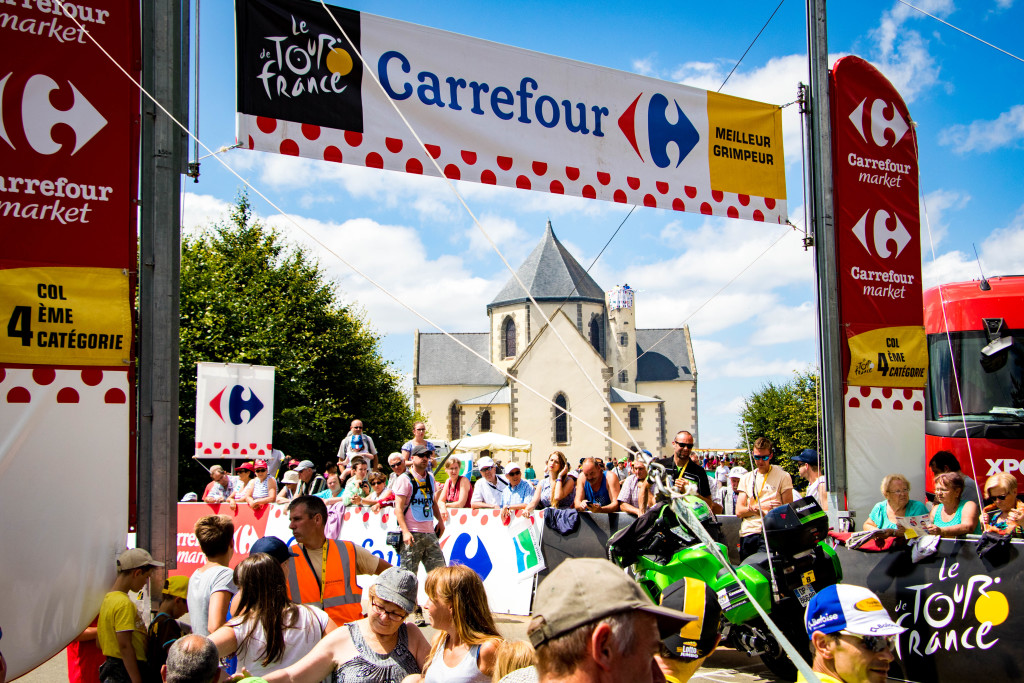 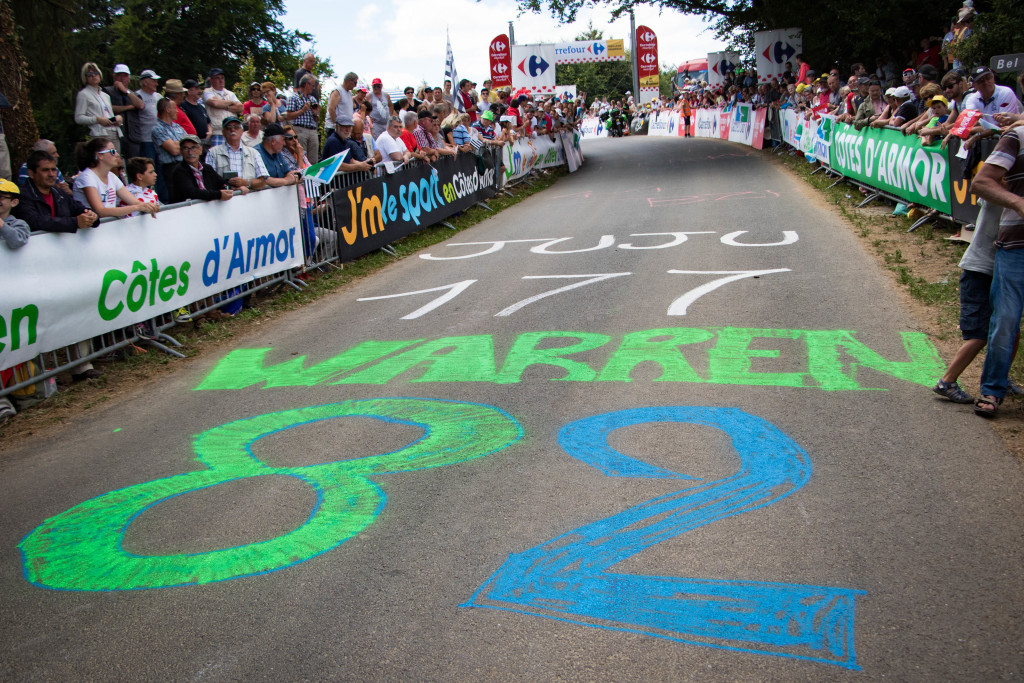 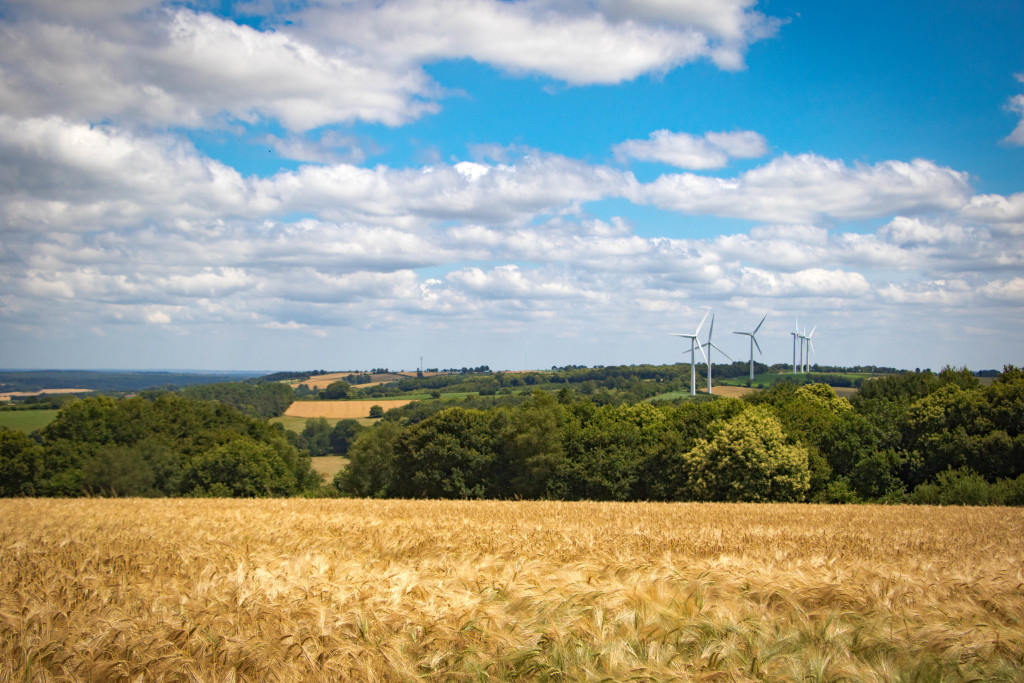 Peeking through a break in the tree line, more wheat fields and wind turbines, as promised.

My first thought was “wow, this is packed! And this is only a cat-4 climb?” I can only imagine the crowds along some of the monster climbs in the Alps and the Pyrenees. Stacked several people deep, some fans got creative with their viewing options: 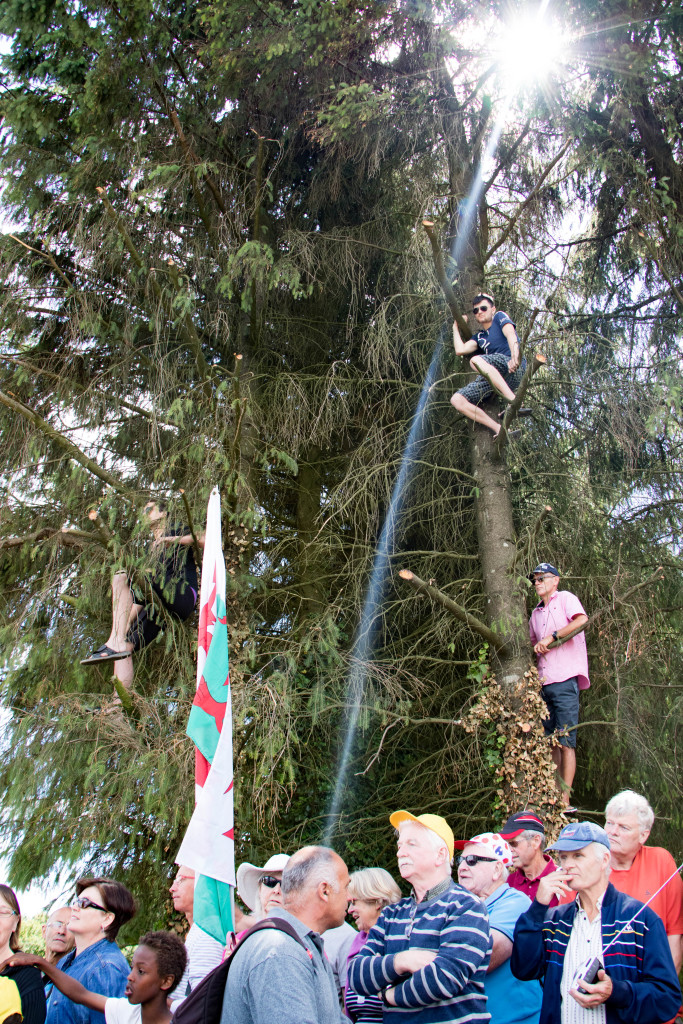 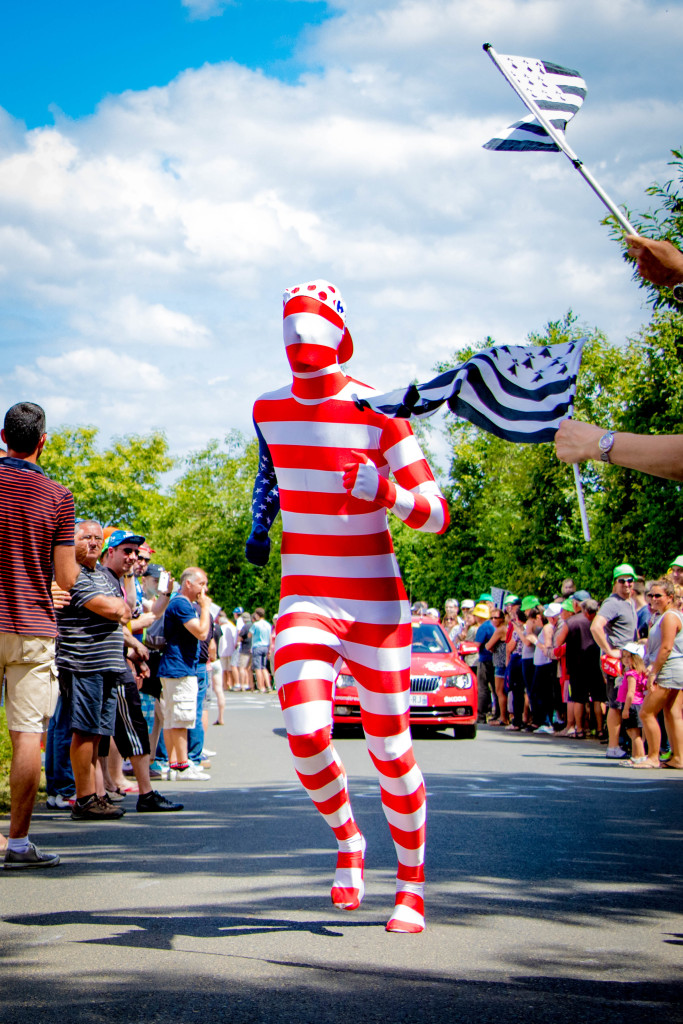 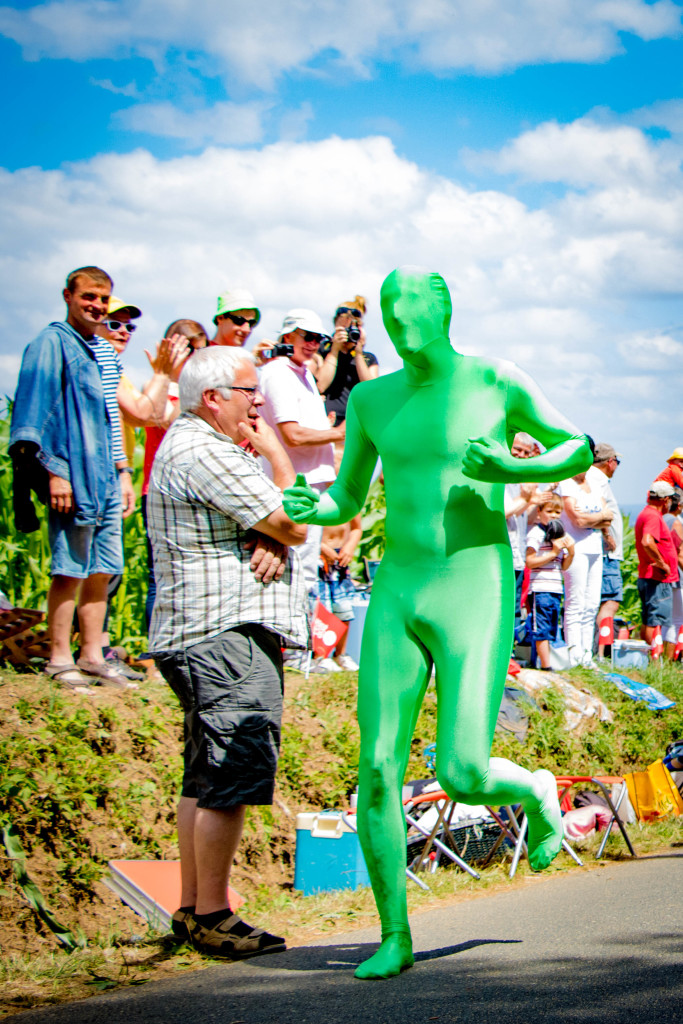 As the pack rolled by, the situation on the road was mostly the same. Breakaway steadily chugging along a couple minutes ahead of the peloton: 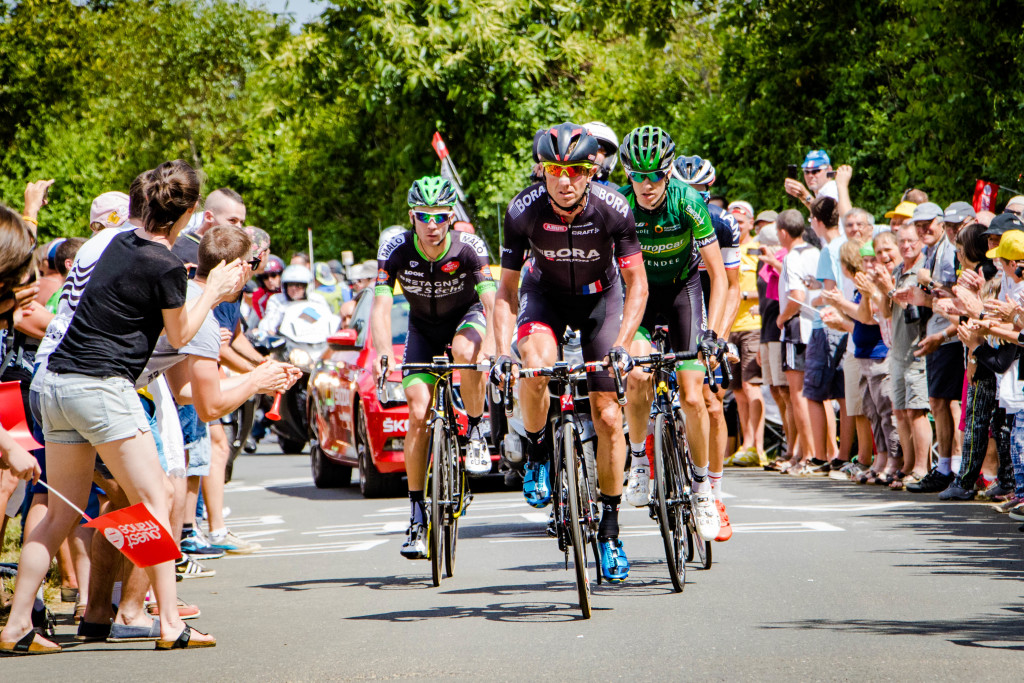 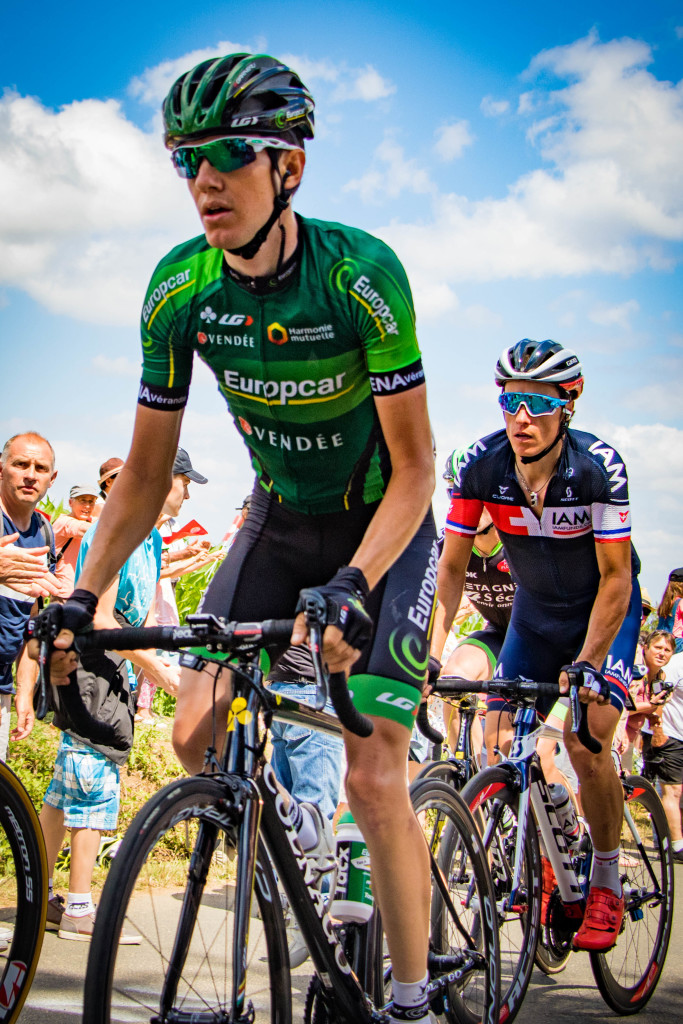 I was about 100m down from the actual KOM. I know Sicard took the KOM point, but I don’t believe it was hotly contested. As the pack rolled through, it was pretty apparent that the mix of climb and pace was still on the easy side of things. 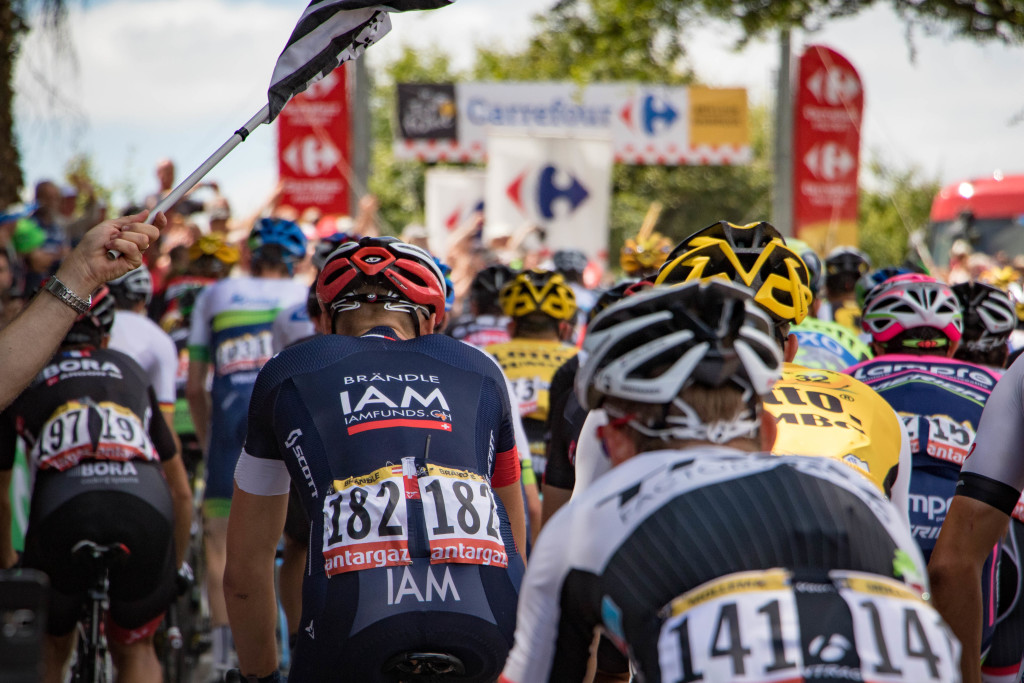 After the jaunt to Mûr-de-Bretagne, I set up about 700m from the finish, just before the grade started to taper off. 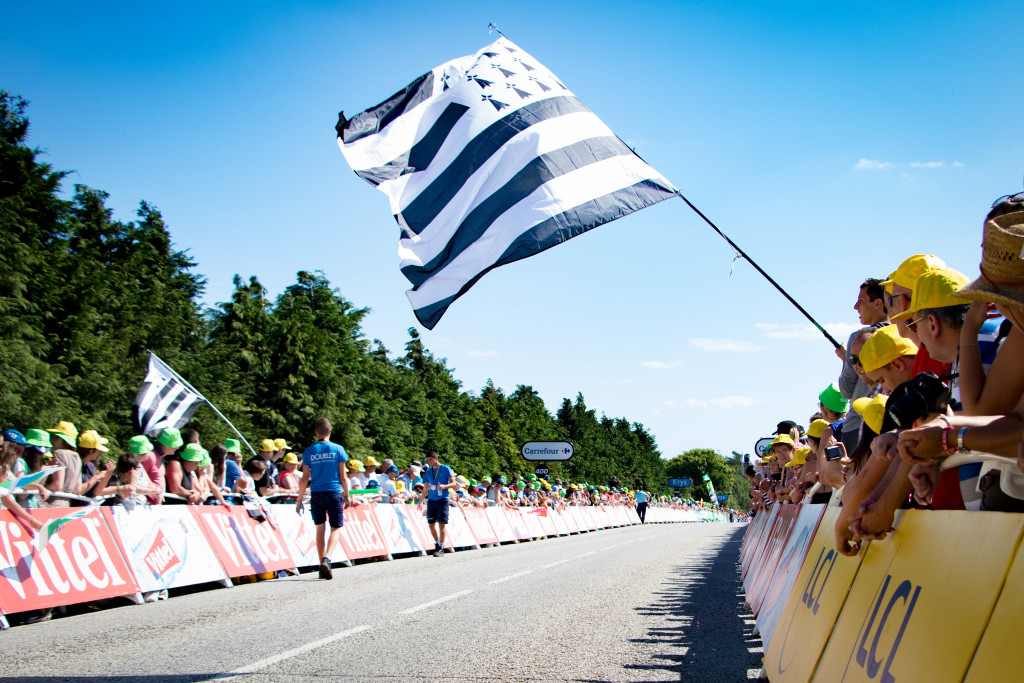 As the race charged up the climb, Chris Froome (Sky) was absolutely hammering on the front. 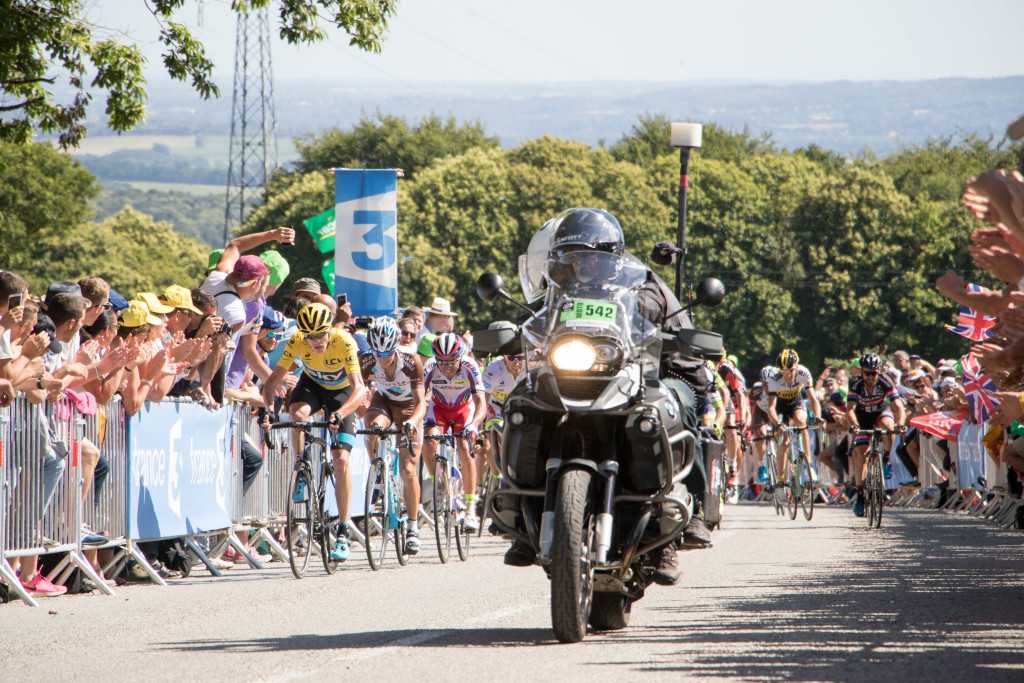 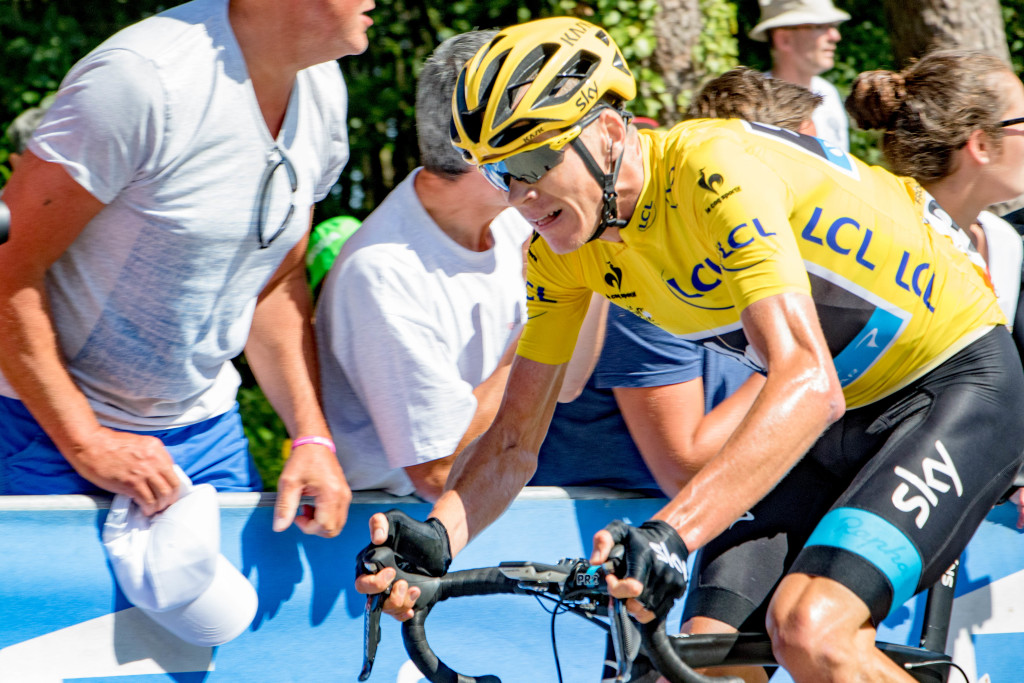 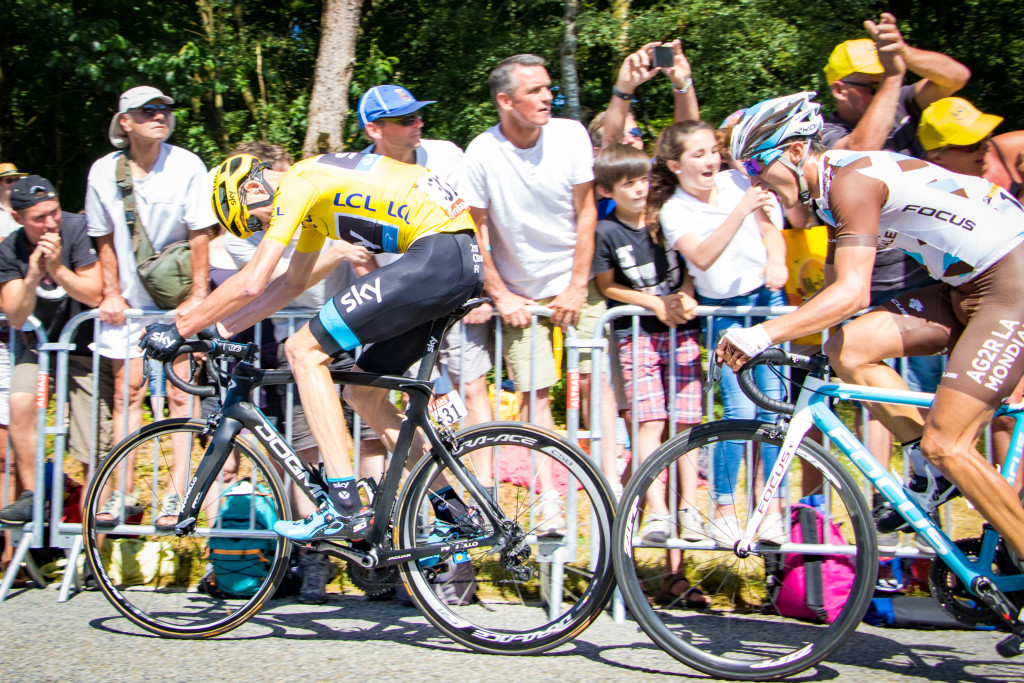 Too far away to actually see the finish, I sprinted back to the line to catch the podium ceremony and maybe some rider reactions. As I ducked through the broadcast technical zone, I happened across Jens Voigt and grabbed a quick snapshot of him before darting off to the finish area. I still hadn’t known who won, and at this point, I was going to let the podium be a surprise.

Through a gap in the fence to the rider area within the technical zone, I spotted Froome cooling down. He looked pretty thrashed. 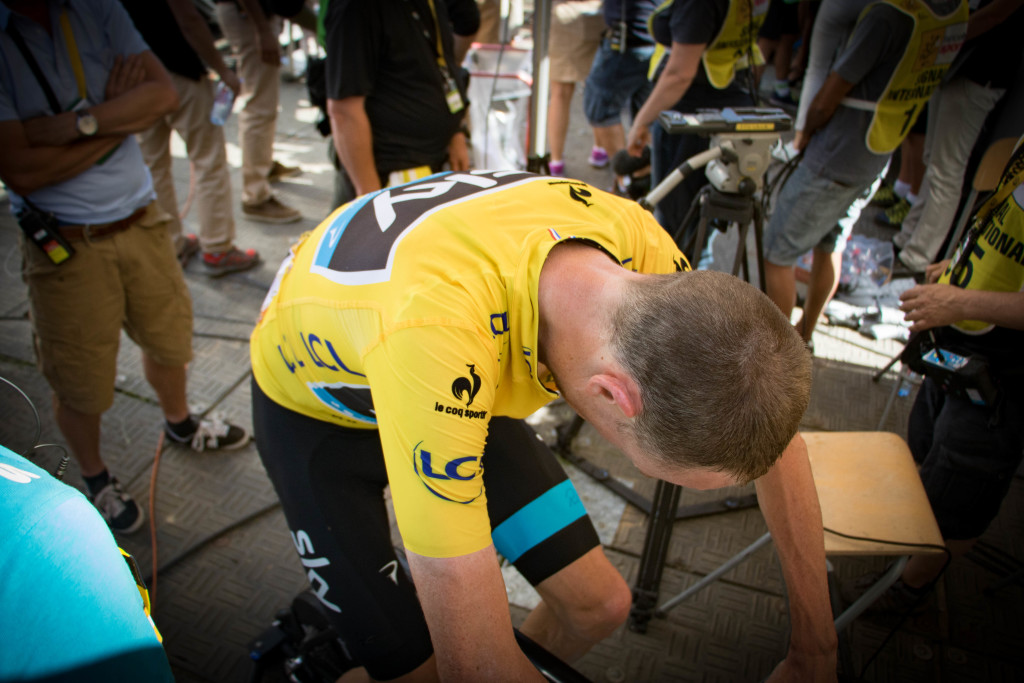 But he was still in the tech zone, and not back by the team bus to cool down. Surely he had won?

Alexis Vuillermoz not only took the win, but looking at the replay, the race played out different than I expected! The pace briefly eased just after my spot allowing the race to come back together a bit. Vuilermoz took off with everyone else looking at each other to repond. Dan Martin (Cannondale-Garmin) took off in pursuit a moment later, but it was too late, with the rest of the pack playing cat and mouse for 3rd place and beyond. Vuillermoz finished in style, 5” ahead of Martin, and 10” ahead of the rest of the pack.

Also on the podium, Sagan literally clicked his heels (I wish I had the picture) before taking possession of the green jersey for the first time this Tour. Sagz may not have the raw sprint power to consistently beat Cavendish or Greipel, but he can hang on punchy climbs like this to mop up some points, whereas Cav or Greipel are relegated to the back of the bunch. 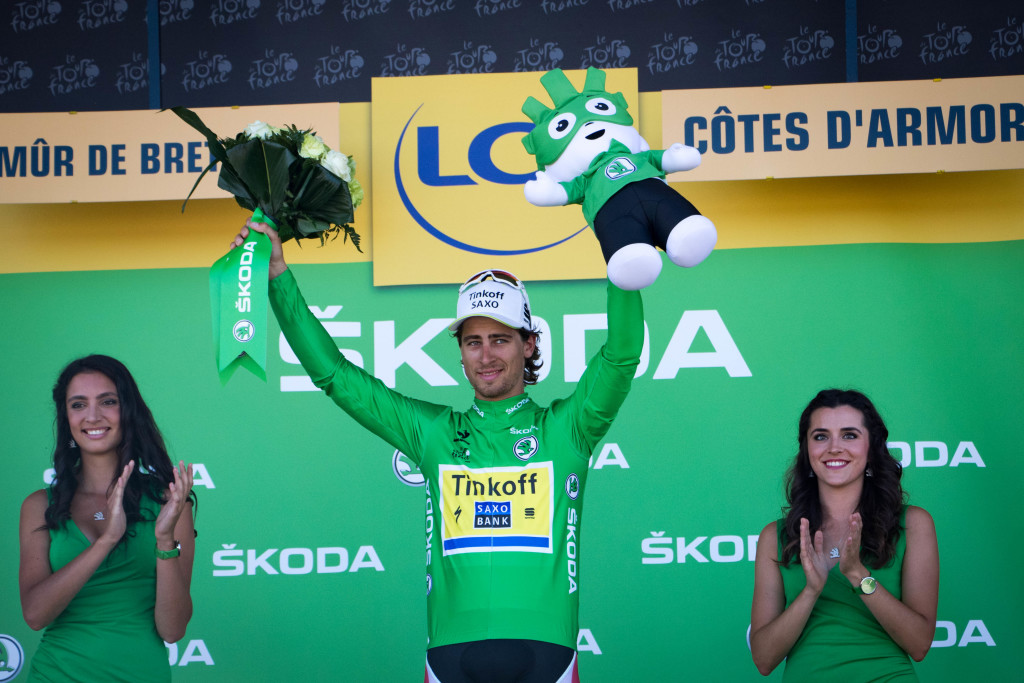 The points race is close: Sagan – 213, Greipel – 210, Cavendish – 159, Degenkolb – 158. With maybe one sprint finish before the Champs-Èlysèes, I’d imagine there’ll be a little more action than usual to take those intermediate sprints.

Froome is still in yellow, Sagan is still (also) in the white, and Teklehaimanot is still in the polka. Sunday’s stage is a 28k TTT from Vannes to Pulmenec, before a rest day/transfer to the Pyrenees on Monday. But, I’ll leave that for the other journalists to cover… 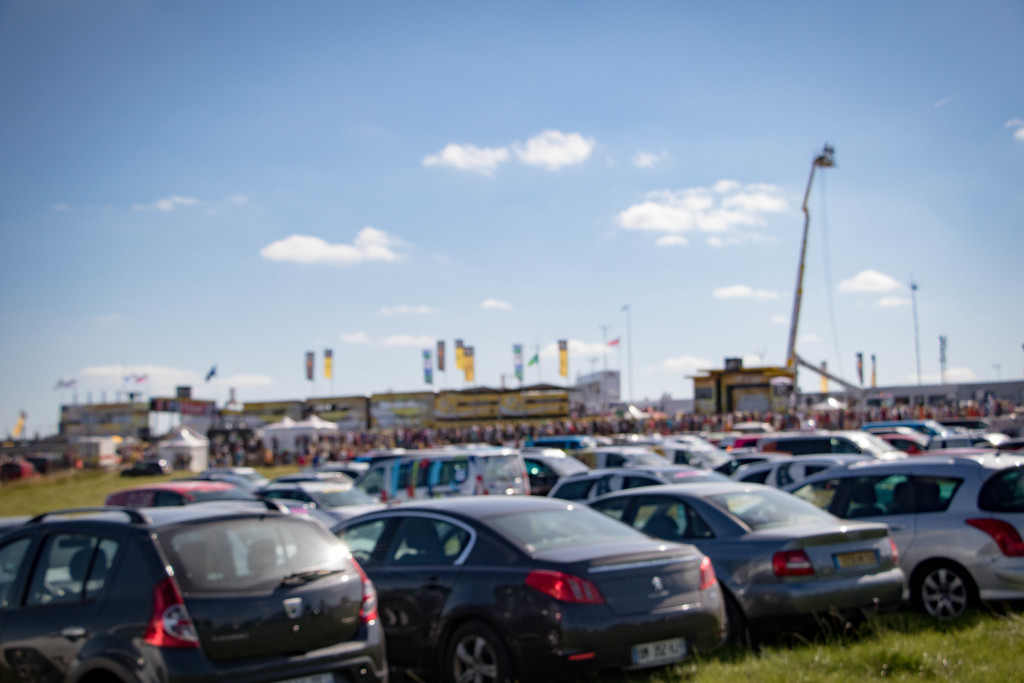 Welp. This was my last day shooting in France. It’s back in the car again, but this time only to the airport. I’ll be traveling back to the US on Sunday, and if I’m lucky I’ll be able to catch updates on the TTT during my layover in Dublin. Thanks to Bill for letting me cover the Tour for CXHairs, and thank you for reading. Hope you enjoyed.