Jingle Cross World Cup? After an unsuccessful 2015 bid, the organizers of Iowa City’s UCI C1 event, Jingle Cross, are confident they will land a World Cup in  2016. Full story (in English? What?) from the Iowa City Press-Citizen is here: http://www.press-citizen.com/story/news/local/2015/09/22/ic-bid-world-cup-cycling-event/72583698/

[Editor’s Note: In 1981 I had a Cedar Rapids Gazette paper route in Iowa City and the carrier for the Press-Citizen used to deliver after me and hide my papers with the hope people would cancel their subscription and subscribe to the Press-Citizen. He was in eighth grade, I was in sixth. The paper boy game is not for the faint-hearted.]

Elle Anderson’s new race program. Elle Anderson, who has left her Dutch team and earlier this year declined an invitation to race CrossVegas for the U.S., is coming back. She announced her plans, yesterday, and revealed a one-women SRAM/STRAVA team. Full text (also in English) is here: https://www.cxhairs.com/2015/09/23/elle-anderson-announces-new-team-with-sramstrava/

Neerpelt Kicks off Belgian ‘Cross Season. The GP Neerpelt, part of the Soudal Classics, takes place this weekend and is the first big European test of the cyclocross season. World Champion Mathieu van der Poel, who missed the CrossVegas World Cup race because of a lingering knee injury will also be sidelined for Neerpelt. According to reports, he may also miss the October 4 Superprestige race in Gieten. That leaves CrossVegas winner, Wout van Aert,  as teh heavy favorite going into Neerpelt, but Sven Nys, who has won the race six times, cannot be overlooked. Even Wout says Sven (who was a bit sick and jetlagged after returning home from Vegas but who seems to be better now) is going to be stronger this season than last … and he won Neerpelt in 2014. 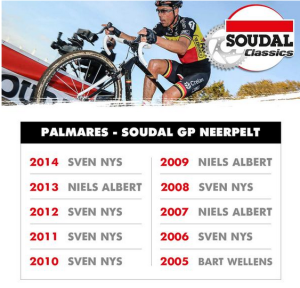 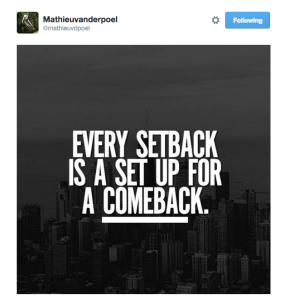 Want a preview of the race? Here’s SVENNESS 2.1 from the 2013 edition of the GP Neerpelt:

One thought on “Morning Roundup (September 24)”