[Editor’s Note: John Kavouris, who covered the Tour de France for In The Crosshairs, is back stateside and covering cyclocross with another installment of The Big Picture.]

The domestic UCI calendar returns once again to Stage Fort Park in Gloucester, MA to kick off New England’s  Verge series. Gloucester is part of New England’s “Holy Week” of cyclocross that kicks off with the Midnight Ride. Weather was comfortable in the mid-60s and sunny. The course was fast, bone-dry, and a real dust bowl.

After a morning of amateur races burning in course-lines, our coverage begins with the UCI Elite Women’s Race:

Moments later, Noble would come to the front and push the pace, forcing a selection that would hold for the entirety of the race: Noble, Mani, and Wyman, with Compton chasing on after starting a few places down.

Two laps in, and Noble, Mani, and Compton were together, with Wyman falling just off the pace ~20s back, and ~20s more to the group of women chasing for 5th place.

At the run-up a lap later, the situation at the front of the race remained unchanged: 3 off the front, Wyman in between, and chase-group together.

While Noble put on a fantastic show early to animate the race, with 1 lap to go, Mani hit the afterburners and left Noble hanging on and soon opening a small gap on Compton. 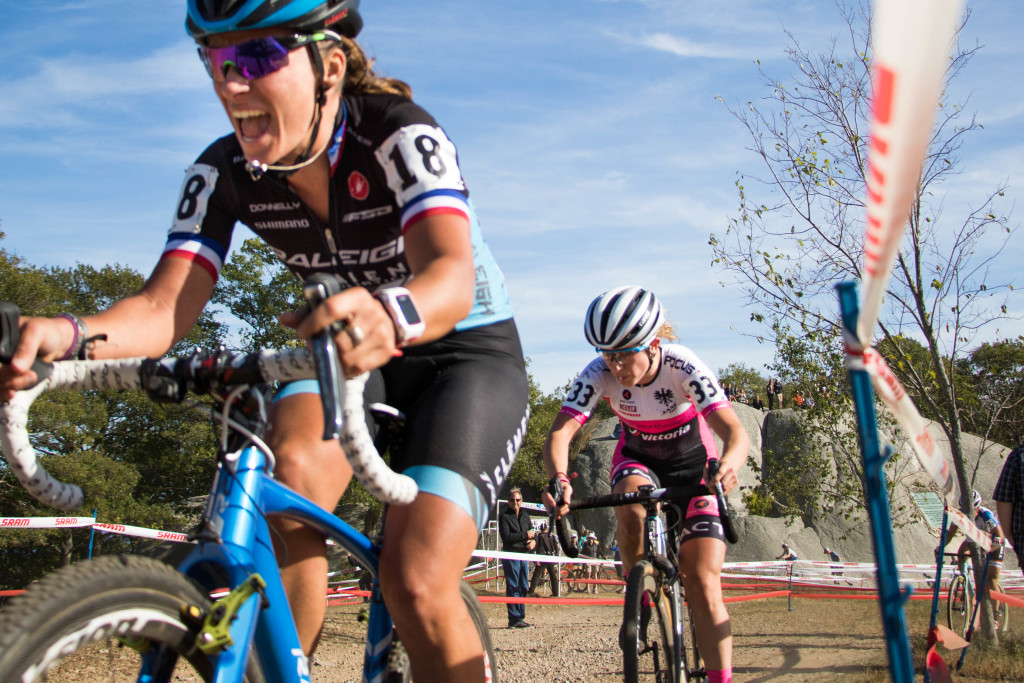 As the leaders reached the long, slightly uphill finishing straight, Mani had plenty of room for a solid victory salute.

Despite missing out on the win, Noble finishes in 2nd place, all smiles.

Bonus points to Siobhan Kelly (To Wheels/Epic Sports Performance) for showing off the course conditions. Dry CX is by no means dirt-free CX.

Keep a lookout for Men’s day 1 coverage coming soon, and full coverage of both Men’s and Women’s races on day 2.