After making my way from the exciting finish of the women’s race, the men had already started to line up.

Jeremy Powers (Rapha/Focus-Aspire Racing), looking sharp in his national champion kit, and taking his choice a step beyond most competitors. While many opted for a file/lug combo tire like the Challenge Chicane, or something intermediate like a Grifo tread, Powers opted for the FMB SSC Slalom (a modified Grifo tread pattern that FMB is claiming as ‘all weather’), with silica-compound green rubber. Whether or not the green tread is even more supple than the black FMB compound as claimed, they do look appropriately PRO.

After the start, I couldn’t run fast enough to catch a glimpse of the holeshot, and the pack is halfway past me as I get to the adjacent straight. The pack was MOVING, and kicking up a fair bit of dust. 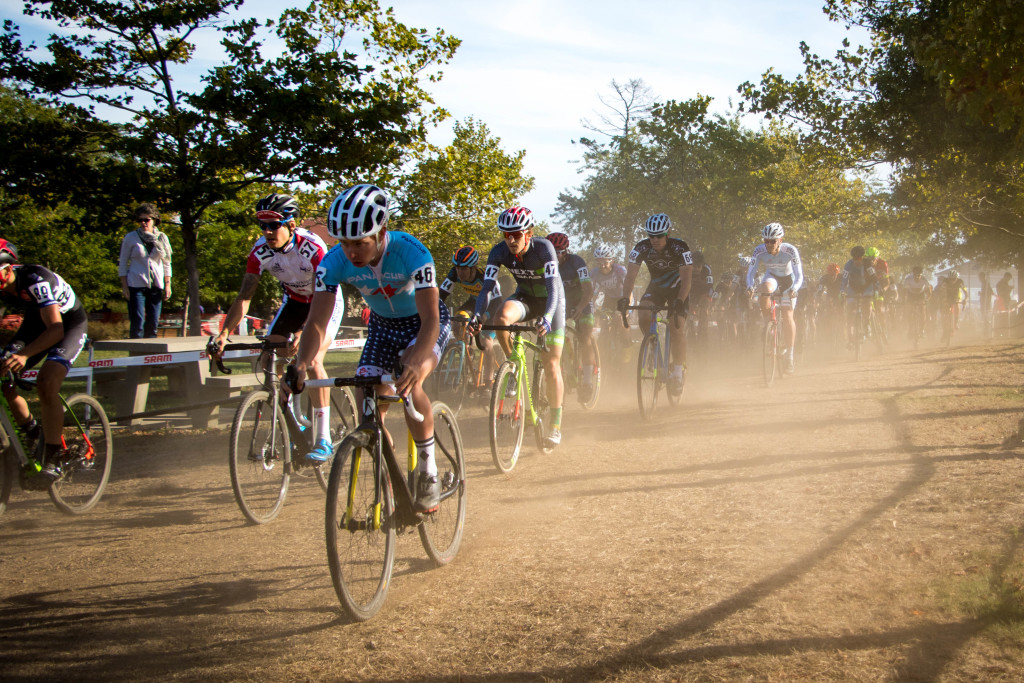 Within the first half-lap from the start chute, the entire field was strung out. 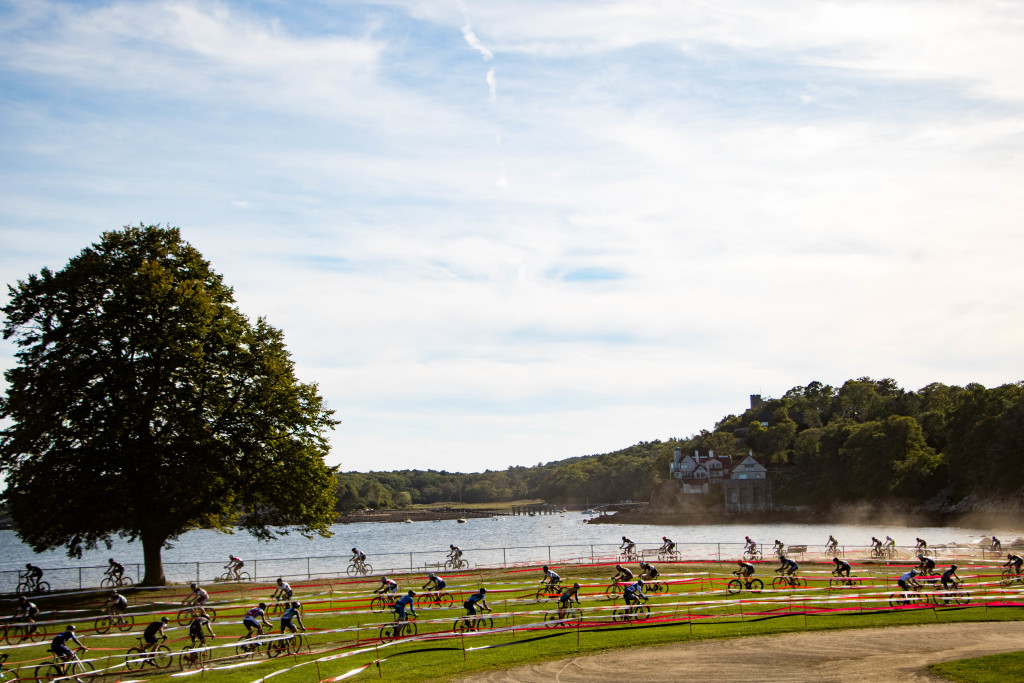 At the start of the first full lap, Powers was at the front, followed by Ryan Trebon, Stephen Hyde, and Curtis White (Cannondale p/b CyclocrossWorld), and Tobin Ortenblad (Cal-Giant/Specialized). 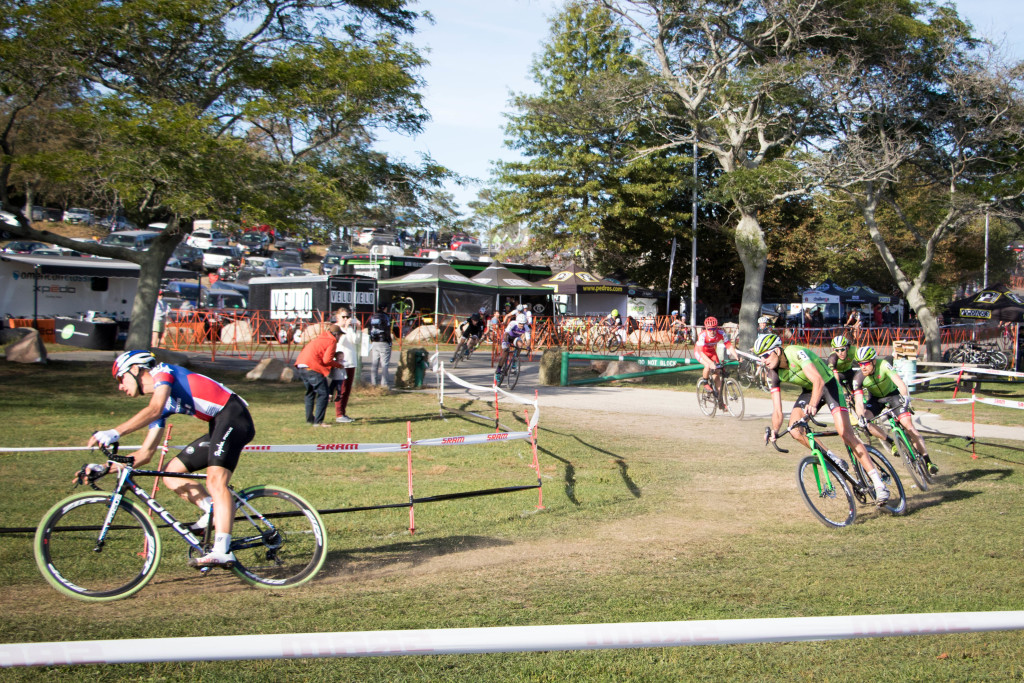 Shortly after, the leaders hit the right-hand turn into the sand pit. This stuff was really dry, and really loose, without the chance to develop much of a rut into the entry point. A few riders got more sideways than others, but most blazed through it despite relatively close quarters.

Much like the women’s race, it didn’t take long for a selection to form: distancing themselves from Ortenblad, the Cannondale team of Trebon, White, and Hyde pushed the pace, bringing Powers with them.

Powers and the Cannondale riders continued to trade digs at one another over the next lap or so, until…

After emerging from a back leg of the course, Trebon was no longer with the front group, leaving only White and Hyde to keep a reign on Powers.

Out of sight and back into view again, the elastic has snapped for Hyde, who has fallen off the pace, leaving only White to contend with Powers.

Moments later, Trebon appeared, shouldering his bike with a flat. While unable to help his teammates try to reel back Powers (who was FLYING by this point), he was able to race pretty well for himself. After remounting on the finishing straight and hobbling to the pits, Trebon was able to battle back to 5th place!

By the next lap, it was clear that Powers was in control, with White yo-yoing behind him.

At the run-up, it looked like the gap was decreasing. Slowly.

But White looked like he was deep in the pain-cave to claw back those seconds.

This is as close as White would come to overtaking Powers, but no more.

Elsewhere on course, Jamie Driscoll (Raleigh Clement) had worked his way up to 4th place, after Stephen Hyde. Driscoll seen here (not?*) doing it correctly with a super smooth step-through dismount:

Powers was no slouch, though – he was definitely putting in work to distance himself from White. But considering the calm under pressure, smoothness while riding, and raw power that he can unleash, it’s clear that JPOW is national champ for a reason, and quite deserving of today’s win:

White had a fantastic ride as well, and fans were sure to let him know as he rolled in – unfortunately a bit too far down from Powers to make a final sprint, but well ahead of Hyde for congratulatory high-fives. For reference: on the podium later, he was too young to have a sip of the sponsor beer – this kid’s got plenty of career ahead of him to take a win against Powers.

After the race, I had a chance to catch up with a few of the riders after crossing the line.

Clark was still stone-faced, Powers and Trebon swapped stories and laughs about their races, and Ortenblad looked tired, having raced hard from the gun to end up with 9th.

Finally, I’d like to introduce racer Mark McConnell (Hot Sauce Racing) – 18th place on the day. You might know him already, you might not. But if you don’t, you soon will – Mark is on the roster as a pro contributor here, and I’ll be catching up with him tomorrow for a post-race interview.

*Not Skills, Drills, and Bellyaches approved, but it works for him, so…? Talk to a coach or mentor about it, I’m SURE they’ll have strong opinions on the matter. [Editor’s note: I would say “Not Skills, Drills, and Bellyaches recommended.” We have our preferences and can tell you why we don’t recommend the step-through, but in the end, they are your feet and that decision is up to you.]