Mathieu van der Poel undergoes knee surgery. After an up and down week of feeling good on the bike and then not so good, MvdP underwent surgery on his left knee. Key terms include torn fascia and patellar tendon. He will need at least three weeks of recovery before resuming training. Best case scenario at this point would have him back in competition by Zonhoven, October 25, but that seems like a long shot. Full story: sporza.be/cm/sporza/wielrennen/veldrijden/1.2458863. (We are assuming this story is factually accurate since it is the only one MvdP tweeted out, and his only comment so far on the ordeal.) 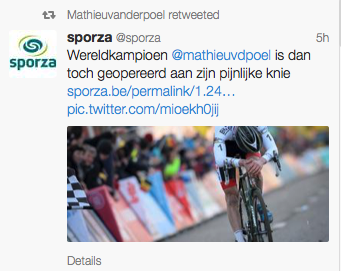 MvdP’s injury means he won’t repeat at the first SuperPrestige round this weekend at Gieten. Wout van Aert enters the 40th edition of Gieten as the hands down favorite, winning three races in a row: CrossVegas, Neerpelt and Erpe-Mere. Lars van der Haar, who was last year’s runner up is looking for the top step this year along with eight time winner (8 times!!!!) Sven Nys. Sanne Cant won the women’s race last year and will look to  repeat after a disappointing finish at Neerpelt last week. Full story (minus any women’s coverage) is here: www.nieuwsblad.be/sportwereld/cnt/dmf20151002_01898563

Update (10/3 10:27am): Mathieu looks to be in good spirits, albeit a bit loopy, in his post-surgery group photo with surgeons. That one is getting framed and hung on some surgeon’s office wall next to the Vrije Universiteit Brussel diploma. Also, does MvdP have a hair person on staff? Because that coiffure is perfect for just going through surgery.

Lars van der Haar has narrowed his season goals down to three. (1) Win the World Cup. (2) Win the SuperPrestige. (3) Win the World Championship. Nothing wrong with aiming for the moon. Full text here: www.nieuwsblad.be/sportwereld/cnt/dmf20150930_01894830.

Wout van Aert credits his early success to practicing technique and strength training. Hear that kids? Despite what The Answer may say, sometimes it’s okay to talk about practice. With a new found confidence, van Aert may also return to riding more barriers, something he shied away from after crashing badly a while back. Story here: www.sport.be/nl/wielrennen/veldrijden/article.html?Article_ID=742153 .

A Women’s series, television coverage, and cameras on rails above water, highlighted at Superprestige kick off event in Diegem. For the first time evah, the women will have a Superprestige series. The prize money is not exactly equal … top six women will split 10,000 euros with the winner getting 4,000 euros compared to 82,500 euros for the men with the winner going home with 30,000 euros … but it’s not nothing. We will call it a start. The Telenet deal has already ruffled feathers in Belgium because many can no longer view races unless they have a Telenet cable box. The discussion of rights continued with comparisons being made to F1 coverage. Grumbling aside, those who can see the races will be treated to cameras on bikes and sophisticated dolly shots. No word on whether FoxTrax technology will be used in the broadcasts. Story is here: veldritkrant.be/nieuws/2015-09-29/hansgrohe-superprestige-stelde-in-diegem-zijn-34ste-editie-voor.

Current UCI Rankings. No real big moves to report this week. Katie Compton and Pauline Ferrand Prevot swapped places with Compton moving up to 8th. Michael Vanthourenhout jumped from 13th to 11th. And Australia is dominating the junior category … for now. For whatever reason, the men’s and women’s U23 rankings only show nations and not individual racers. Regardless, it’s refreshing to see that the women’s U23 category is listed and does indeed exist. Here is this week’s Top 40: 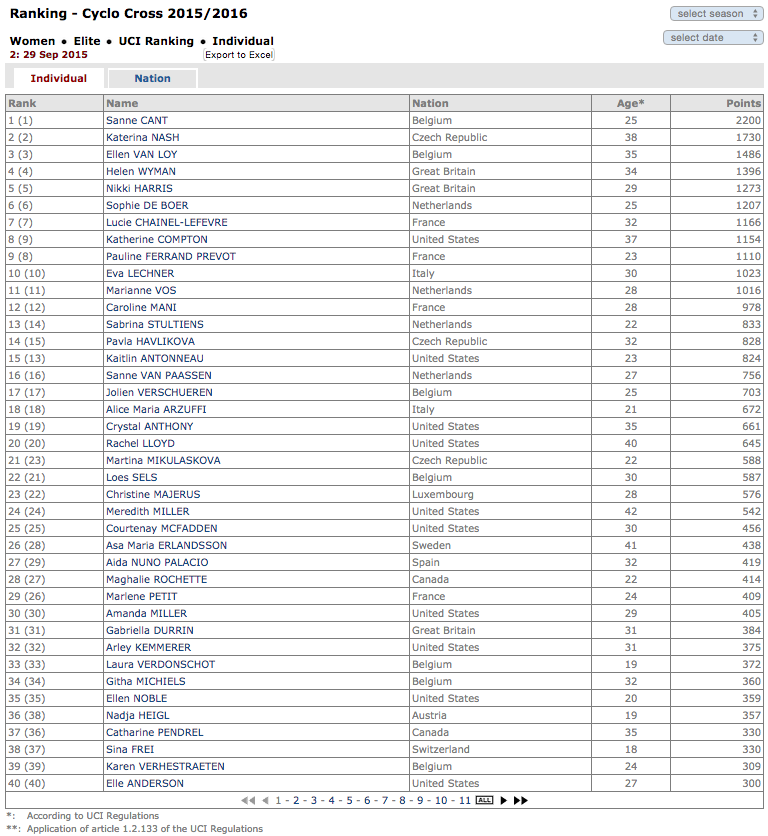 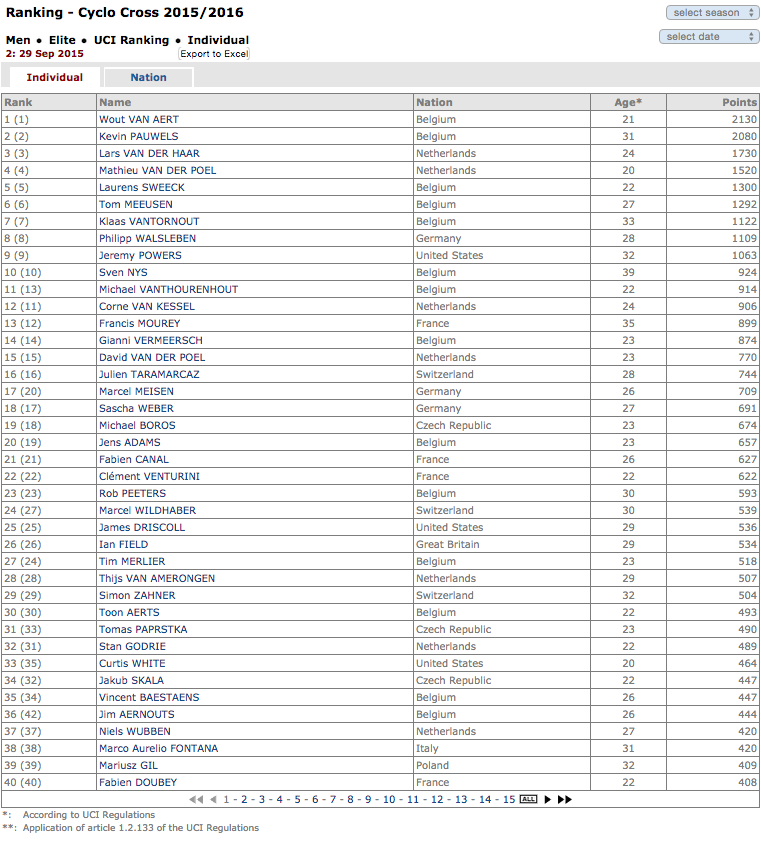 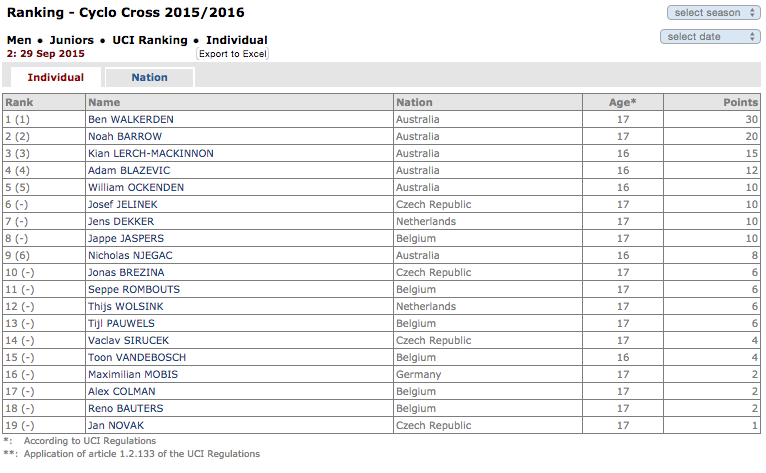