[Editor’s Note: If you aren’t familiar with the Cyclocross Network Racing team, you really should be. This four-man squad of junior/u19/U23 racers is pretty phenomenal. The work that Scott Dedenbach and Matt Bartoli have done to support four exceptional racers is a story worth paying attention to. This was never more evident than the recent Cincy weekend. I asked Scott to give his first hand thoughts about how the weekend unfolded. It’s a great narrative. After checking out the article below, you can follow along with the team the rest of the season on Twitter at @cxnetracing and @cyclocrossnet. And at cyclocrossnetwork.com.]

The Cincinnati weekend is a special one for our team. Along with it being the hometown of Spencer and Nick Petrov, the dates of the races often fall on Halloween, which is special, but also means it’s the birthday of our junior rider Alex Morton. So we went into this weekend ready to have some fun and race fast. 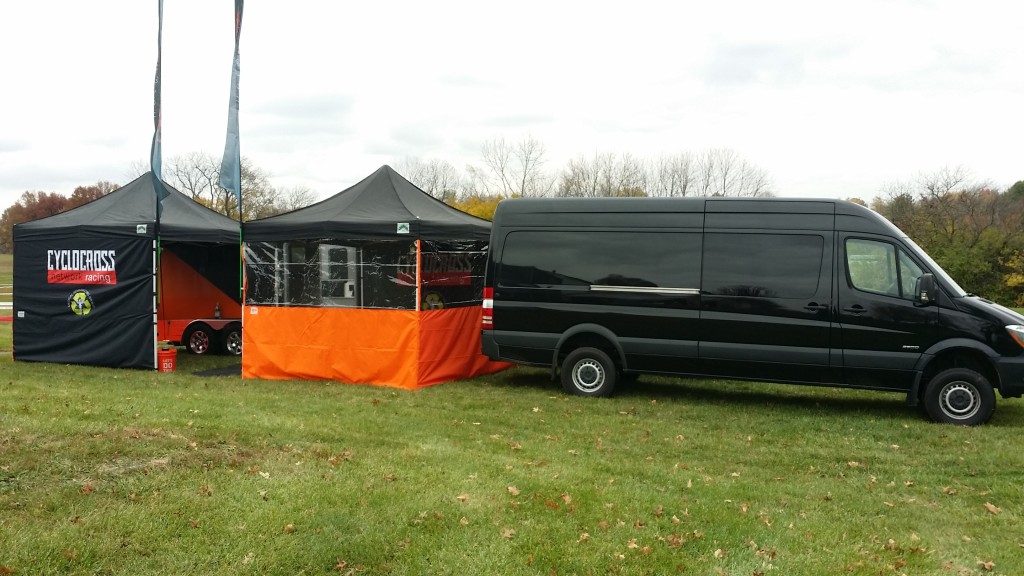 With team set-up and pre riding on Friday done, we had a great spaghetti dinner at the Petrov’s home, spent some time enjoying each others company, the kids watched the old Star Wars movies and team mechanic Garret Hein and I glued tires, of course.

We got to the venue early Saturday to do our regular morning set-up of trainers and bike racks. First up for the day was Nick and Alex and they both rode well getting 2nd on their podiums. Elite Junior rider and Nick’s brother, Spencer showed up as his race got closer as did U23 rider Drew “Dizzle” Dillman, both to watch the younger guys race and to just hang out with the team. 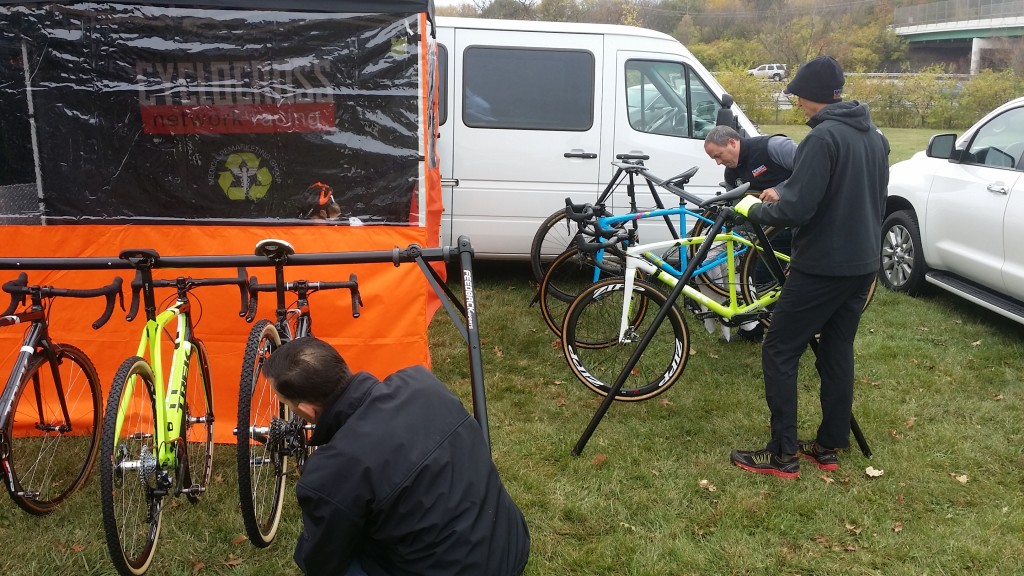 The rest of the racing Saturday was going to be challenging for the team both because of the great competition and a run of some bad luck. However, as cyclocross often shows us, adversity can be a chance to shine, and Drew was about to show us how.

Spencer, with his front row position in his race, had a great start and was riding well, locked in a great dual with current national champion Gage Hecht. At some point early in the race another rider got their bike into Spencer’s rear wheel, leaving a large white scrape around the rim and causing his rear wheel to come off center and create a brake rub that was so bad Spencer had to stop and re-set his wheel. He exchanged bikes and rode well but his podium chance was gone.

Next up for us was Drew Dillman riding against the best the US has to offer in the Elite race that capped off the day. Drew was the first call up in the third row and he put himself on the right side of the row. The whistle blew and the 90 rider field took off. Within a half lap of the start bad luck would once again rear its head when Drew dropped his chain. Post race inspection and the fact that he rode the rest of the race with no issues lead us to believe that it was just some fluke thing. A stick from someone’s wheel? A phantom hop at just the wrong moment? Something. Drew had to stop and replace his chain and by the time he re-mounted and got going he was approximately 8th from the back of the field.

Some people thought Drew’s race was over at this point; but as he rode by the pit with determination on his face I shouted out to him “ it’s OK, just ride your race”. I’d like to think this had an impact on him but the reality is he probably didn’t even hear it as he was about to put on a cyclocross clinic by just putting his head down and riding his ass off.

Drew then proceeded to start to move up through the field, picking off other riders one by one. One lap later he was in the top 50, by the next lap the top 40. He was driving hard and still looking very smooth out on the course. Another lap goes by and Drew yells to me as he passes the pit “What position am I”? I yell back “ 20, 20, 20”. At this point other friends of Drew’s who are working the pit start to notice his ride and start to encourage and cheer him on. Next time around one asks me “What position is Drew now”? Fifteen, I replied. Then 14, then 12, and as they come around with one lap to go Drew is sitting in 10th position and manages to hold it through to the finish.

Without naming names here I’d invite you to go to the results page at USA cycling and look at some of the names that are 11th and lower. Remember this was an elite C1 field, the best of the best in the country and Drew just rode through about 60 of them. With adversary slapping him in the face Drew Dillman just kicked its ass, and showed us how you can turn bad luck into something great.

Sunday at Devou. The Pan Am Championship.

The final day at Cincy is always challenging as it’s at a different venue so that means a complete tear down and set up for team support. We had to accomplish this early as Nick was racing a bit earlier than usual. So with minimal set-up Nick was on the trainer, doing a light warm up after his effort from the day before and smiling as usual. The kid never has a bad day!

Nick was racing the All junior 9-14 race as a 12 year old which he won by almost a minute and thirty seconds.

When he got back to the team tent, team manager Matt Baroli jokingly said to him “Hey Nick put a 1st next to your name on the team whiteboard”. We use this for scheduling through the day so everyone can keep track of what is going on. So Nick wrote a large 1st next to his name.

Next up was Alex Morton. Alex had just turned 14 the day before and was racing the Men 45/55+, single speed, and U19 race, non UCI. Within a couple of minutes of the start Alex; who was already at the line, realized he forgot to pin one of his numbers. Team director Matt grabs his mountain bike and races off with the number in his mouth to get it there in time.

Now if you follow OVCX on Facebook, you might have seen Matt’s mountain bike. In the race to get there and the excitement of the day, Matt ended up leaving it at the starting line all day, forgot about it and drove off home!! It was posted on Facebook as the most high value item ever turned into Lost and Found and gave everyone a good laugh! 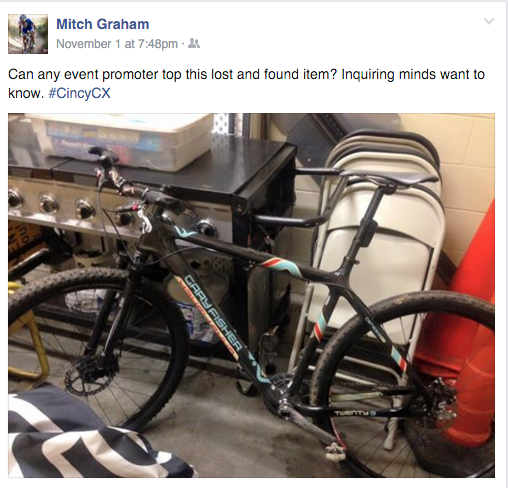 Alex meanwhile, number in place, starts well, rides third wheel for a while behind current 55+ national champion Tom Price. He then passes, moves to the front and gaps the field. Alex’s exact winning gap is hard to know as there was a chip malfunction but I’m just going to say it was over a minute on the entire field of riders.

When he returned to the team tent we mentioned to him to keep the ball rolling and put a 1st next to his name on the whiteboard which he did!

Next up for us was Spencer. Needless to say Spencer was hungry to ride well after his bike rubbing issues the day before. He warmed up well and was ready to go. When the whistle blew he was off and he and Gage were locked into a great dual once again. This only lasted a couple of laps though as Spencer began to pull away and gap the field.

I was standing on a back section of the course giving times to Spencer as he rode by. “20 seconds” I yelled! “30 seconds”! Finally with 2 laps to go I couldn’t see the second place rider so could only shout “40 plus seconds” as the other riders were not in sight as Spencer went by.

Spencer went on to win by over a minute and claim our teams first ever Pan Am jersey for cyclocross! It was an amazing feeling of happiness that I felt for Spencer. If you could see how hard these kids work and how dedicated they are to this sport, I think you’d agree with me.

Of course! When Spencer got back to the team tent there was a 1st placed next to his name and we realized that Hmmm this was getting interesting!!!

Our final race of the day was Drew racing the U23 race for the Pan Am continental championship. After his performance of the day before I was worried that he might be a bit tired. Drew, along with Curtis White from the Cannondale team were the favorites of the day having both been on the podium the previous year and with Logan Owen deciding to race the elite race later in the day.

The race started with Grant Ellwood from Boulder Cycle Sport getting the hole shot but then having an untimely mechanical. He would go on to have a similar ride to Drew’s on Saturday though as he fought back from almost last place to finish 5th on the day!

Within the first lap Drew, Curtis and Tobin Ortenblad were at the front and starting to create a gap on the field. This then slimmed down to just Drew and Curtis with Tobin sliding back a bit as the other two locked horns.

Drew and Curtis then proceeded to ride away from the field as they dueled for the lead, trading places at the front, sharing the work. As they came by the pit one time I turned to team mechanic Garrett Hein and said “I think Curtis looks a bit fresher than Drew” he responded “I was just going to say the opposite”! Needless to say we were both a bit nervous.

With about three and a half laps to go the leaders came back into sight and Drew was off the front and away from Curtis!!! Garrett and I quickly looked at our watches and timed the gap before Drew came past the pit and as he did pass I shouted “15 seconds”! to him. We originally thought maybe Curtis had some type of problem but Drew later told us that he was sizing up the right moment to attack and had pinned his effort in a certain spot on the course where he felt he was faster and it had worked.

Drew managed some high fives to the crowd as he coasted to the win down the finishing stretch with the biggest smile I’ve ever seem him have and one of the greatest weekends of racing I’ve ever seen by any racer anywhere.

In the awards area post race, Drew, Tobin, and Curtis all stood smiling and laughing, arms over each others shoulders, cracking jokes and giving hugs like the best friends ever. It was a pure joy to see.

As you can imagine, after celebration and podiums, cheering and drug testing we got back to the team tent and Drew placed the final 1st next to his name on our team whiteboard. We had just gone 4 for 4 at one of the biggest races in the country and become the first cyclocross team to ever have 2 Pan Am championship jerseys at the same time. 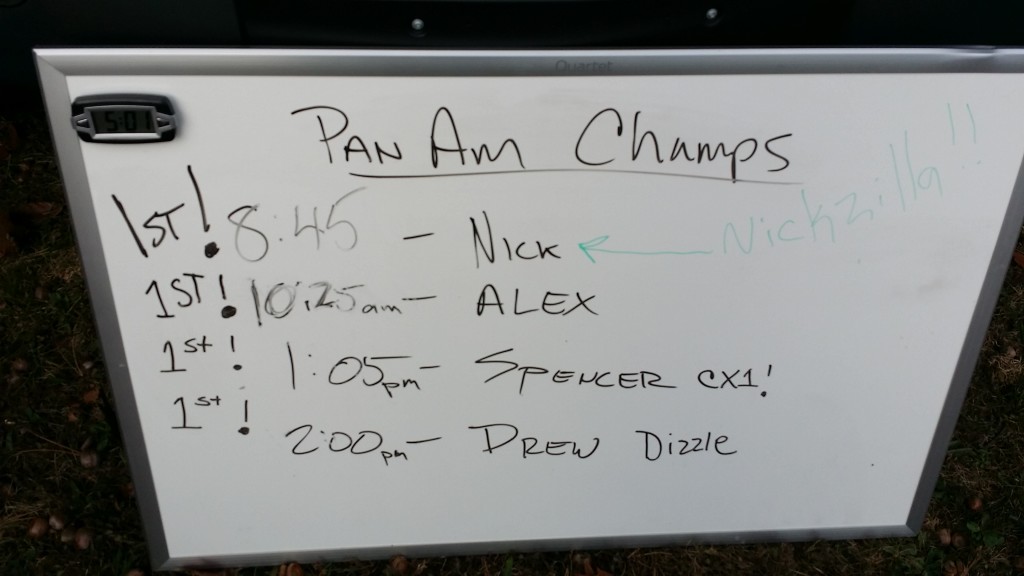