Front row call up at a stateside UCI, the first of the season.

Time to make it count.

The whistle blows, I’m clipped in and riding with a clear shot toward the first corner. Settling in behind Michael van den Ham, it could have been a local jam if not for the sixty elite men behind us.

A sizable gap soon established itself between the three Canadians, lone American Anthony Clark and the remainder of the chasing field three laps in.

I move to the front to take my pull but gentle chaos ensues as Clark’s front wheel clips my heel as I pass by the group. Spokes are broken. Words are exchanged. The drag race continues into the forest.

Clark can still ride to the pit, we don’t attack but a gap opens up in the exchange anyway and it’s looking like a promising all-Canadian podium. Goosebumps. We push on but I’m on the rivet now. Tunnel vision around every corner while my knees flirt with the perimeter of the parcours’ extremities.

A stake catches my left knee and puts me over the bars. Rhythm is jarred. I remount but the wheels in front of me have disappeared. I chase after my friends but they don’t want to play with me anymore. I can’t blame them. They’re teammates and I was hitching a ride, but in earnest I couldn’t contribute much more besides match their strength for a time. Clark bridges to me now while fifth through tenth are chomping at the bit some seconds behind him.

It goes on like this for a few turns of the course. I sit on Clark’s wheel and watch a man ride his redline and beyond it; washing out on a slick pavement corner within the forest, I ride on but he bridges back to me again. Unrelenting. I decide to wait.

Wait for the chance to sprint him to the line. He’s too strong to ride away from, but believe I have an edge at the finish. The bell rings with one to go, Clark doesn’t look back, but he doesn’t hand me the race either. If you blurred your eyes in the last lap, you’d have thought we were riding a tandem—I never give much more than a bike length. Around the final corner I enter the drops and accelerate wide to make the pass, but so does Clark.

If we continue on this trajectory he’ll ride me into the fence. Known to be a cagey and aggressive rider, I never expected this part to be easy but landscape is running out. Time to improvise. Brake check front wheel. Swing left while grazing Clark’s rear tire. Accelerate. Again. Mashing on the pedals now, nearly even with Clark. A few more meters filled with maybes. But there it is, the white line separating the race and the end beyond it. And now I was past it. 4th without a jury. In typical Euro styling I raised my hand, upset with the crooked finish. But soon realized that it didn’t matter and I just had the best UCI result of my season thus far.

I went over to Clark immediately and apologized about the wheel. He later messaged me about the sprint and it was settled. Best for last, MVDH won the race. It was Michael’s first UCI win and I’m ecstatic to see and be a part of it. 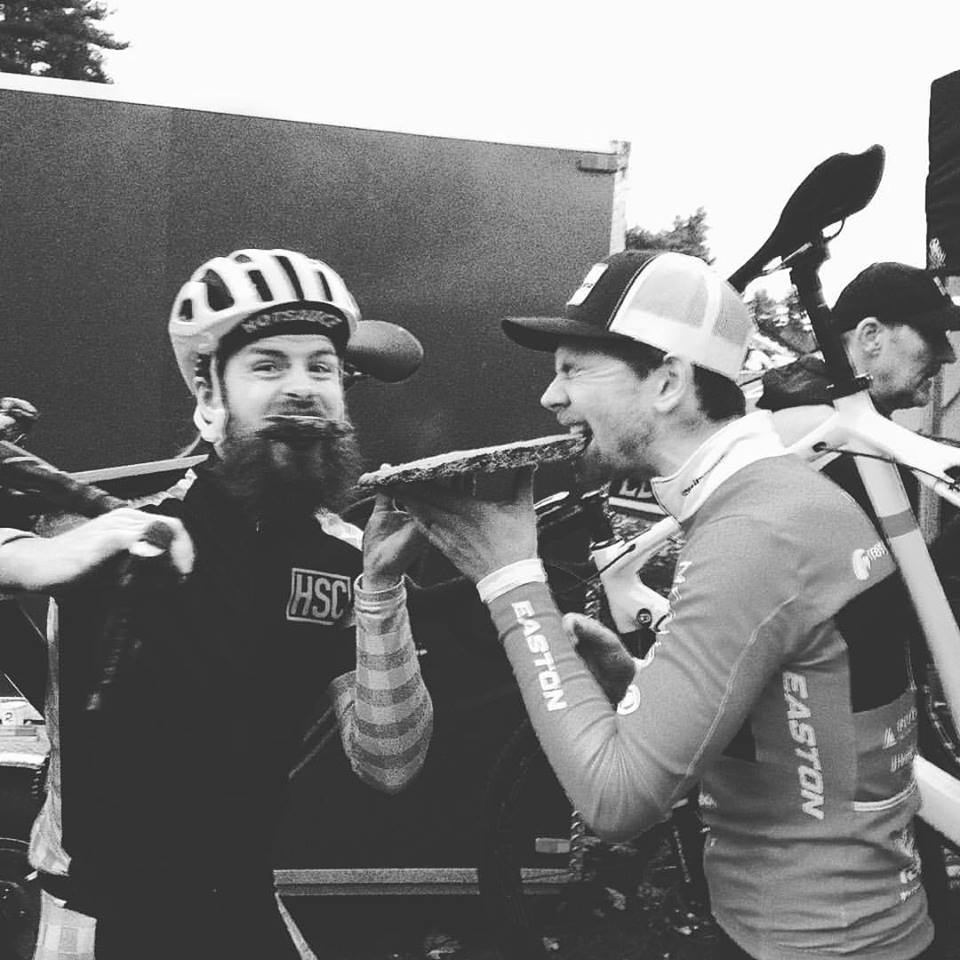 [Editor’s note: Mark is off to Belgium for a while to once again fly the HotSauce Cycling flag on the Euro-cross circuit. Follow along with his experiences on Twitter at @HotSauceCycling and on Instagram at @HotSauceCycling. Also, please check out photographer John Kavouris’ new site: www.johnkavouris.com. He’s got some pretty cool stuff planned for the upcoming road season that you won’t want to miss.]

View all posts by Mark McConnell

3 thoughts on “The HotSauce Chronicles: I did It All For The Cookie”