The guys were on good form from the get go today. They always ask me who’s going to win when I get in the car and always I reply ‘Kevin Pauwels’, which leads to the friendly banter and their continued assurance that Sven is unbeatable. They have also decided that I am some kind of good luck charm and they are going to push theirs. Today was ‘can we blag a closer parking space’ which was achieved by actually knocking on a door and asking a householder if we could park in their driveway!

After the European Championships the day before, who would be wearing their new blue shirts and would the new champs head the field?

Having exchanged our tickets for orange wristbands we made our way around the course to the striped beer tent for our, now customary, pre-race coffee. Set on the flattest plains you could imagine the hills have got to be man-made, but so much HappyJoyJoy with the whoop-de-whoops (my name for the triple wave-type hills that the riders must negotiate is both directions in front of the VIP tent – always good TV), the double set of steps with terrifying drops after and, of course, the big sand trap from where there is a view of pretty much the whole course. There was some standing water in the middle of the spectator paddock, but mostly the weather has continued to be dry and the course was sound and looking fast.

So sorry to the Newbies, but we kind of missed your race :-(, but after coffee the U23’s and women were out for a practice and the I was by the sand hill for the Juniors race and so many mishaps! Out on the course I ran into someone I met at Zonhoven. It appears that I’m not the only one who forgets names, but I will answer to ‘Hey, New Zealand’. Still can’t remember his name though!

Beer O’clock came early for the guys, but I was still taking pictures of young men in lycra and missed that round.

Many people have said to me before that they found Belgians to be rude and, particularly when it comes to saving their place on a cycling course, inflexible and bloody minded. Up to this point I suspected that what they thought were Belgians were really Dutch! Unfortuntately, today I ran into a couple of these types of people and also ones who laugh at others who are amazingly trying to live their own dream. I am thankful that these dreamers have extemely thick skin and just keep on going despite the detractors.

Catching up with the guys after the Juniors we headed off to the rider parking, which yielded us some top-quality croney-ing, Julien Taramacaz Stevens bike with baby photos (aaaah!) and a 2010 rainbow Ridley. Now, I will say that there was a beautiful display of Ridley X-nights – Love the “Done in 60 minutes” BTW – but none of them had the bidon cage on which, if you are reading after seeing the race, you will know that Kevin used and kept through the whole race. This leads me to questions

1) Were any of these the actual bike ridden?
2) How long does it take to attach a bidon cage?
3) When do they decide he will ride with the bidon?
4) Could it possibly be that I was actually looking at Gianni Vermeersch’s bikes?
You may have others, but can anyone answer these for me?

When we get back to the course Eli Iserbyt and Quinten Hermans are having another teammate tussle for the U23 prize.

After Quinten put on the Euro champ jersey yesterday it’s Eli’s turn for the win today.

Italian Gioele Bertolini (star in Valkenburg) is a distant, but well-ridden 3rd and yes some people were indeed singing ‘Gioele’ to the Dolly Parton ‘Jolene’ song at the podium!

Half-time and a chance for a beer and packed lunch. By now the course is filling up nicely and this mornings standing water is now becoming incorporated to become our first genuine bit of mud this season! (Calendar says November, is that right?) this is just in the spectator paddock though and the course is fine except for the deep-as sand pile, which, after the newbies, Juniors and U23’s plus all the practising has ruts becoming chasms at the top of the hill!

The half-time entertainment today is a Bart Wellens ‘yes-I-really-have-retired-Telenet-Fidea-all-comers-one-lap-invitational’ (or something) and a chance for the Wellens watchers to have one last glimpse of their hero in action (CXHairs :-)) Like leading the team out from the tunnel Bart got to be the first down the sand hill and looked like he was really enjoying it.

Before you know it it’s 13.30 and time for the Super Prestige Ladies Cup, or Women’s race as we call it. Having retained the Euro champs blue jersey yesterday Sanne Cant is out to prove she’s the best.

In the first part of the race Helen Wyman brought the challenge, but after she dropped back, crowd favourite, Ellen van Loy was riding a storming race into second place. Then it was all on for 3rd place with Helen trying to hold on from a fast finishing Jolien Verschueren (hero from Koppenberg) coming up on her. The last 2 laps were a right ding-dong battle. I had moved to be just by the little step run-up at the end of the lap and the woman next to me was going through all the emotions cheering for Jolien –
is she? yes? No? may be. Oh no! Oh yes! WooHoo!

As Jolien made her way past Helen and managed to put a few metres between them by the end of the lap. It is so good that now all the world can see that women’s racing is just as intense and exciting. Good on ya Sporza.

So now we prepare for the men’s race. The guys like to get a good view of the big screen, but I like to be closer to the action for KOMAAN KEVIN screeching. It really does have to be directed at the person, I feel. Quite by accident I found myself by some other (unlabeled) K-Pauw fans in amongst the Sven’s so Kevin got his ears blasted every time he came by us!

AND HOW ABOUT THAT FOR A CAPSLOCK COMMANDING PERFORMANCE?

Talk about a range of emotions! So happy, but we know, from this season alone, that anything can happen – a fall, a flat, a slip, broken chain, cleat bounce out etc… so we are on edge right to the end. My twitter posts:- 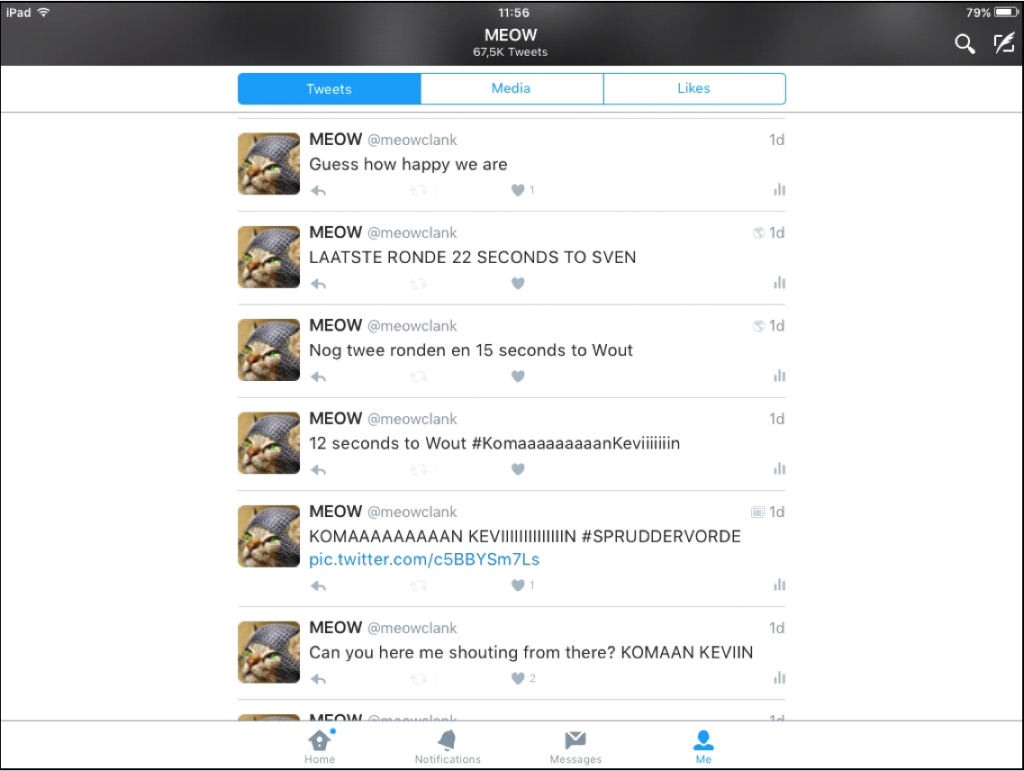 but all was good and first win of the season was in the bag.

I was straight off to the podium. Sadly, the full ‘Keeevin Pauwels’ chant choir was not there and our celebrations may have seemed a little lacklustre to those watching from afar, but I assure you that was not the case. There was no need for any podium pouting from Wout or Sven as they both knew they had been soundly beaten out of sight and no mistake.

Hansgrohe shower for Kevin and flowers for Wout, who is still leading the competition.
Actually, I think I got more winners kisses than Kevin as the guys graciously recognised he was the strongest rider on the day.

And so, back to the car to join the end of school holiday traffic around the Brussel ring and let’s do it all again at Gavere.