The course at Essen takes in a little bit of The Netherlands and phone reception can be a little bit dodgy, but I love it as it runs alongside the railway line and all the local houses play host to the riders cars and campervans. The wind can get up a little bit on the nippy side though.

Getting here is easy and only involves one train change, but time to get a coffee at Antwerp Central.

The course was mostly the same as last year except that the planks were moved to the far part and one of the step-runs there was no spectator access (maybe they planted some new trees?) Of course, it being a rail yard, there were loads of sleepers and large stones around for my to twist my ankle on a few times! Last year there seemed to be way more mud, especially over on the Dutch side, where it was touch and go with leaving your boots behind, but this year even that bit was quite firm except for a few pockets.

I made it to there super early in time to catch the Newbies race. Naturally, at that time in the morning the only people around are other idiots like me and the families of the riders. The sun coming up over the pits is pretty special and wandering around here early is wonderful. It’s a bit like being at school or work after everyone’s gone home.

With the race underway I had to test my Dutch listening skills by working out the loudspeaker commentary. This category has the guys and girls riding together, but only a prize for the first 3, who are all guys. I didn’t see who was the first girl behind the winner, Niels Vanderputte. Would it really kill the organisers to have a prize for the girls? Hopefully, with the new Women’s U23 category in major races this will filter down. The recent viewing figures for the televised women’s races are showing the organisers that there is indeed an audience for women’s races. I wonder if we could find a sponsor for a little trophy…

Anyway, back to the racing and the Junior boys were on the start. BIG SHOUT to all the family and friends who give their time willingly to support the riders. How many of the 30+ lining up today will make it to the next level?

The usual suspects seemed to be having the day off and Thijs Wolsink was not about to miss this opportunity and good on him for not taking the jolly to the Spanish sun.
After the Juniors I was joined by just one of the guys. This week one of them became a Grandpa for the first time so was on doting Poppa duty to Lauranne, who is having a few problems in hospital, but we wish her all the best and welcome to being human.

No Eli Iserbyt lining up today for the U23 guys, but Eurochamp Quinten Hermans is looking splendid in the blue cossie. I would just like to say that, although Stybar is the Czech superstar`on the course today, watch out for Adam Touplalik in the coming years. He may even take over some of the space from Laurens Sweeck on my imaginary teenage girl bedroom wall!

The halftime show this week is another charity event and a chance for mentally handicapped riders to get a ride on the course alongside Belgian team coach Rudi de Bie. However, as the elite men and women are also out on the course practising they also get to ride with Sophie, Sven, Stybar and KEVIN. BPost Bank you’re BRILLIAAAAAANT. 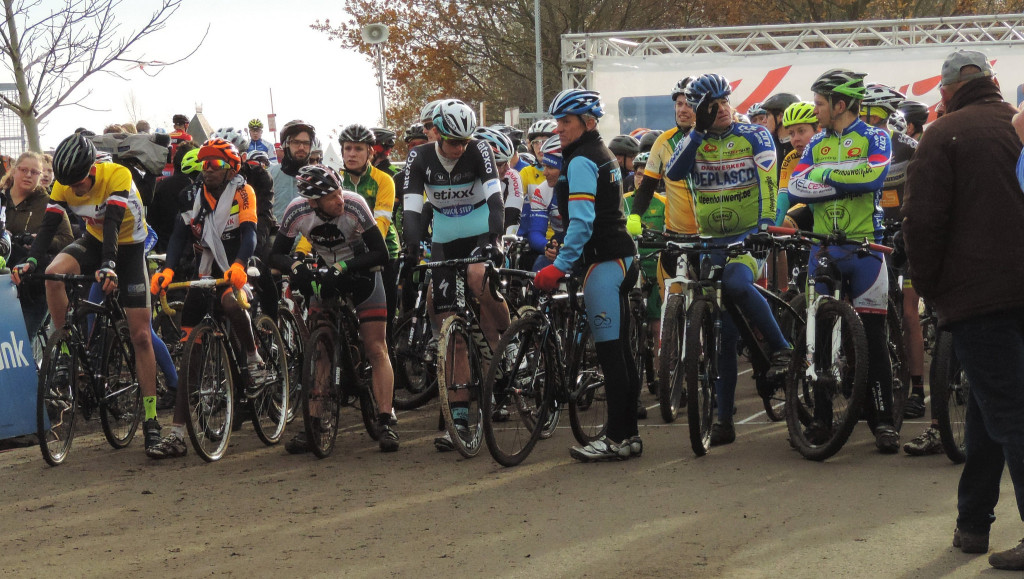 So to the mobile homes and a short wander finds Ellen van Loy warming up next to Quinten Hermans cooling down and then we ran in to Kevin! I was a bit slow off the mark and then the camera was all sorts of not ready and between my dumbfounded, starstruck idiocy and then trying to get a shitty over-exposed pic he was gone. My companion did manage to ask him if he’d got his form back to which he replied “Ik hoop” and that was it. Gone in a second for which I berated myself for the rest of the day (and I still am). 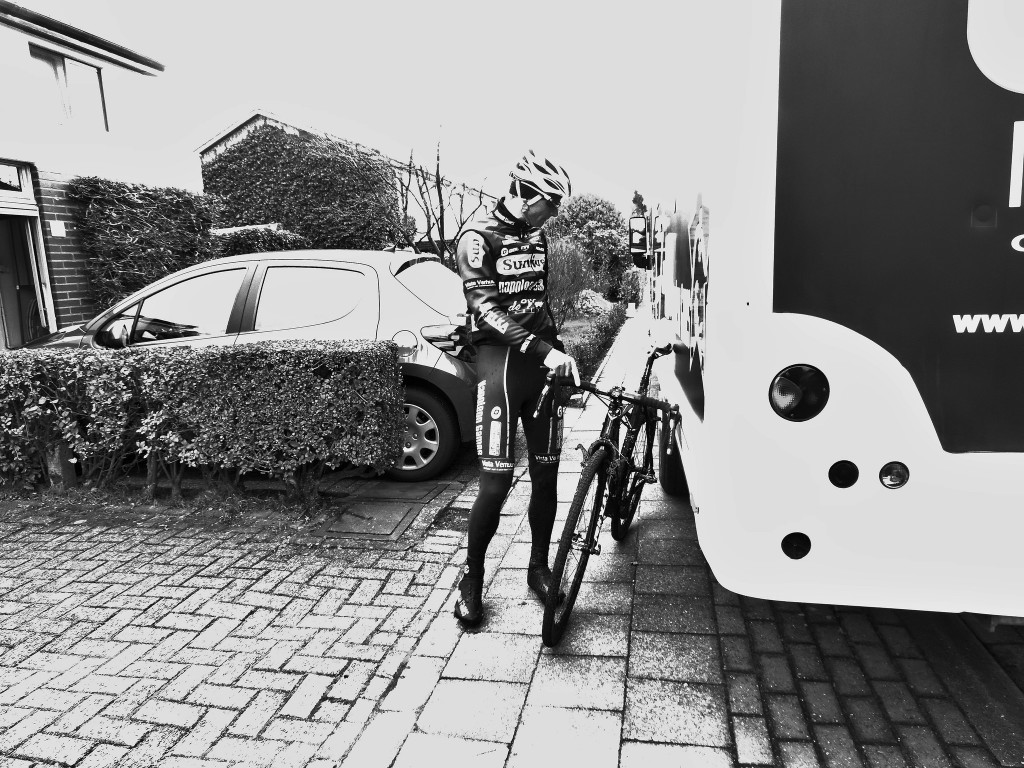 After that we find Sanne Cant on the rollers and, on straightening up after taking numerous bike pR0n shots, MvdP went flying past, but who knows where they parked? Pavla Havlikova was getting herslf sorted with her team and Helen Wyman was plugged in to music whilst warming up so I didn’t disturb her. 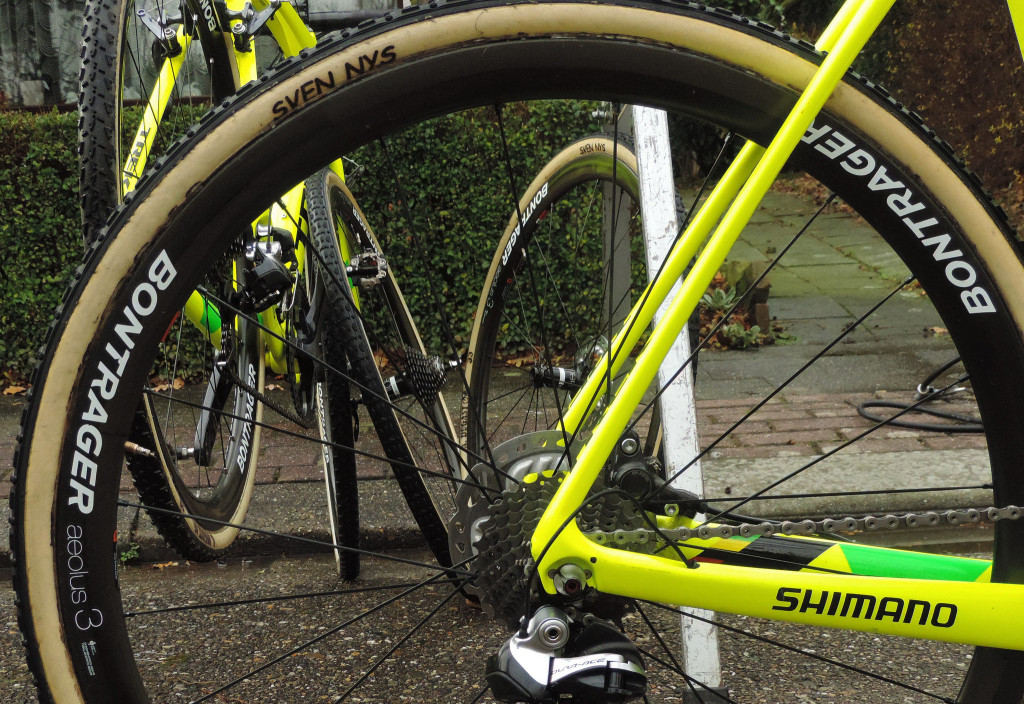 And so to the main events.
Well, we did have to have a beer at some point, but made it back to the start line for the Women’s Race. 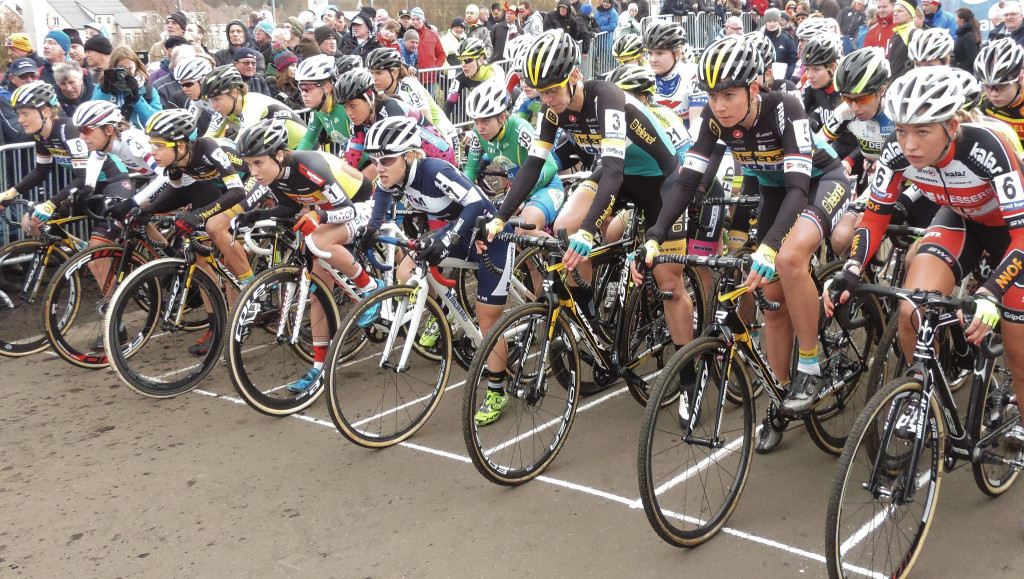 I had to give ‘looks’ to some people who decided to stop and have a chat at the worst bottle-neck by the start line! Yes, its 2-3 deep here, although the rest of the course is still a bit sparse, probably due to fears of being attacked still. COME ON PEOPLE, Iknow its wonderful being able to watch on TV, but nothing beats being here.
COME CX-ING, YOU KNOW YOU WANT TO (new slogan!)

After the mud rush at Hamme, the firmness of Essen did not suit Helen Wyman, although she gave it a go from the start. Sanne Cant was back in her element, but the surprise of the day was Thalita de Jong ripping up the form book and making the second place her own. Jolien Verschueren was cheered round to come out top in her battle with Sophie de Boeer for 3rd. Nikki Harris and Pavla Havlikova had a right old tussle with Pavla finally getting the better of Nikki. I am going to have to watch this again!

After all that we needed more beer and a quiet sit down and watched the men pass on their way to the start as the women headed back to the buses.
Now, I KNOW you will have seen the mens race on TV or video with all the bad luck of Mathieu van der Poel, which is great that you are not relying on me to give a race report. Frankly for photo taking purposes I was in the completely wrong place for most of the race. Don’t ask me why, but today the pits were just about the fastest part of the course and that’s where we were for the last 6 laps, mostly watching on the double big screens and shouting at Kevin as he went past. I was briefly worried that I wouldn’t see Niels, but thankfully, I have super-zoom! I think we should make this into a wall-paper.

Of course, at the time he was worried that Wout was getting his arse handed to him by MvdP, but then Mathieu’s bad luck took over. Maybe the bike just can’t take too many bunny-hops, but it seems that there became more parts to his derailleur than there should’ve been. He can still run faster than I can ride though! So Wout picks up another win in front of Sven & Michael Vanthourenhout took 3rd ahead of Kevin, Gianni and local hero Tom Meeusen.

Whilst walking out of the course towards the station we were briefly on Sporza! Haha, bet you didn’t see us. Of course, we got to the station to find our train had been cancelled, but big THANK YOU to Dutch railway for getting their Amsterdam to Antwerp train to stop by and pick us all up.

I still can’t believe I missed my chance to do something other than fumble my camera in front of Kevin. What else I could have done I don’t know (any suggestions?), but there’s always next time.
Next up I shall have to get my Francais out of mothballs for SPA-FRANCORCHAMPS for which the guys have given me a ticket (I love freebies) and Namur Citadelcross. Both scenes of Kevin wins last year. My hopes are high.