[Editor’s Note: File this and the the next handful of “A Fan In” posts under “Better Late Than Never.” My apologies to Cat Armour and the viewing public for my tardiness in getting these posted.]

On the eighth day of CXmas we got another local race at the Soudal Classic in Leuven.

And YAY! we get a lie-in too! AAAAAND the 3rd ‘Guy’ joined us again and drove us there in his brand new car (which I managed to get muddy straight away! Oops!) Despite leaving a bit later we are so very early to the racecourse. This gives us a chance for a good walk around the course and the traditional coffee to start the day.

The course has changed quite substantially from last year in that a whole section, the football pitch where the pits and beer tent were, is no longer included. Also, the 2 little scaffold hills are gone and replaced by some cute steps and traditional overbridge. The ‘down the dip’ bit is still included, thankfully, but they take it in the opposite direction. Sorry, sorry, don’t panic! They did find space elsewhere for the beer tent (most important), big screen and, of course, the pits (whew!). Just for the ‘Murican course builders who had a wee problem with the Nationals course last year, this is how protruding tree roots are dealt with here!

As this is a Soudal Classic there are only 4 races: Newbies, Juniors, Women and Men so the U23’s get to be all excited again with the prospect of riding alongside Sven & Co. Shortly after we arrive the Newbies are off and it’s great again to see the young girls racing alongside the young boys (OK, I’ll shut up about them getting no recognition just for the moment, but ask you this, as this really is 2 races in one should they really have to move over for the boys to pass?)

Having deposited The Guys in the beer tent I wondered off again. Now, Leuven is a very international city with a world class university where people come from over the world to study and, of course, it’s pretty damn close to Brussels. It is therefore no surprise to hear English voices here. After the Newbies race I came across an English family who are the type that give the English abroad a really bad image to the locals. With the women on the course to check out the dip and all its potential traps, this chap decides that he and his children are OK to just go wondering over the course! Tosser!

Meanwhile, back at the beer tent I get a DM from @crossvegas and finally get to meet Brook Watts YAY! As it turns out he is staying with Chris and Betty at SurPlace (see AFI Zonhoven) and gives the place 2 thumbs up (of course). Having introduced him to The Guys they strike up conversation easily and of course Brook knows Papa Wellens from waaay back (who has no compunction at all in berating my useless Flemish -Hey! I was living in Brussels, mate!), who is in conversation with the guys from Betekom who I met last year in Tabor! Turns out we are all cronies! Small world this cyclocross thing, but growing steadily.

Leaving these guys to catch up I wondered off to see some of the Juniors race – Oh yeah, there was some racing to see too not just chatting and drinking! The usual suspects were taking it easy today leaving the race open for names we don’t see too often, at the moment, and the win went to Alessio D’Hoore with Toon Vandenbosch and Victor Vandenbosch being podium bookends. And who did I see lurking under the flyover but Wei Yuet Wong again.

I got to chat to Brook again after the Juniors race and we went to the dip to watch the start of the Women’s Race – along with every other bugger! Yep, it was starting to fill up and finding a good spot was tricky.

Ellen van Loy was again super strong through the first half of the race. Sophie de Boer shouldered the bike and went on foot down the second steep part of the dip whereas Sanne Cant appears to have no fear and rode it. Jolien was a bit more tentative as she had greeted the forest floor a couple of times here in practice! I got a bit stuck behind a young family in the thicker underbrush trying to get back to the start/finish and only just made it, though not quick enough to sort out my camera with the superzoom 🙁

Getting back to the stripy beer tent and The Guys and they appear to have been drinking very steadily since arriving. One declared their devotion to Sophie de Boer while the other others tried to get me to drive home! (I have not driven since leaving NZ in January 2013 and I didn’t have my glasses with me, so big NO, but maybe next time. *note to self – check cost of Belgian driving lessons)

It was turning a bit chilly so I was thankful for some hot soup even though they had stuck tiny meatballs in it! (sometimes it can be tricky being vege!) I kidded myself that there probably wasn’t a whole lot of meat involved and spooned the soup around them. Hopefully, my guts would not reject it! (P.S. it was OK) 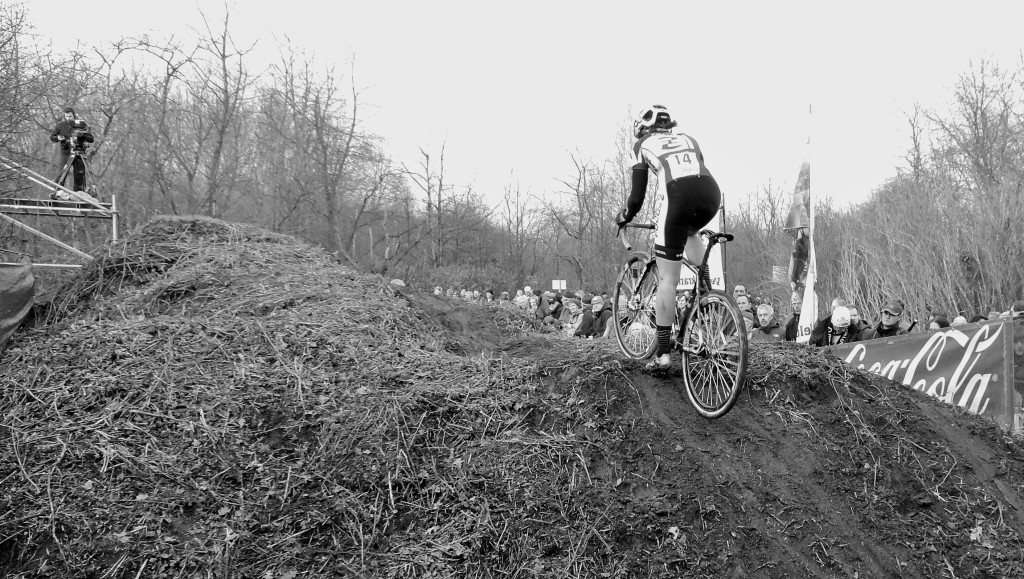 And so to the last event, the Men’s Race, as usual. As there is no MvdP, no Wout, no Niels (:-)no GPON) and especially no Kevin it’s great to get the young ‘uns mixing it up and to get some new names on the podium. Big CONGRATULATIONS to Toon Aerts for the win. These brothers have been a bit of a revelation over CXmas and there’s more to come. Tom Meeusen came in second and how wonderful to see Vincent Baesteans make the podium here since his great results in USA early in the season. It was a tight finish though with Swiss Champion, Julien Taramarcaz, and local U23 favourite Eli Iserbyt being given the same time.

Papa Baestaens didn’t get to see Vincent on the podium though as he was in the carpark jet washing the bikes! Thats dedication but you planned that all wrong, mate. Leave the mud for 5 minutes and get over there next time. It doesn’t happen that often that you’d want to miss it. As he knows The Guys, we told him he should get them to wash the bikes in future. If I’d known I would have made sure I went to get pics of the podium, but sadly I have none.

The traffic queues looked ominous on our way back to the car, but as it happened they were all waiting for some other thing and we were off straight away.

Another great day over. New friends made.