[Editor’s Note: And yet another “A Fan In” posts to file under “Better Late Than Never.” My apologies again to Cat Armour and the viewing public for my tardiness in getting these posted. The races may be memories but the stories are still worth sharing.]

Not sure if CXNats counts as a part of CXmas or not but it does mark the end of the festive season and the wind up to Worlds and the sharp end of the season. Things start to get really serious for the rest of January. For the riders, anyway …

… so, how about we do a national championships around a lake, through woods and along a sandy beach on a gorgeous sunny day in Belgium in January?

“make it so, Number 1” (apologies to Captain Picard)

And there was sun, sand and racing and it was BRILLIAAAAAAANT.

Getting to Lille is one of those bike-train-car journeys and The Guys have no secrets parking spots here so it’s to the paddock as directed and a bit of a walk to the course. Tickets in hand and a bit of a check of my backpack (no bombs there) and we are in with new Velofollies muts on our heads and we are on the sand by a lake next to a beer tent, a frituur, a coffee stall and a big screen. This is the life. The cheeky buggers are charging 30c for a pee but I think its for charity and as long as there is paper and no queue who cares?

THIS IS A BIG DAY

Someone said to me a while ago that the Belgian Driekleur is the next best thing to rainbows, although this last year it has to be said that the treatment from both fans and organisers to Klaas has been somewhat less than respectful (I still don’t understand that).

Coffees in hand we start our wander around the course, that is until The Guys run into the n+1 people who have to stop and chat, so that means we made it about 100m!

We eventually made it around to the other side of the lake where the course nips into the woods for a bit and where, in previous years, there were the planks. No planks today though. I have not been here before where the course has gone all the way round the lake (or have i?) I only remember it going about 3/4 the doubling back on itself. Anyone know different?

There was no screen round this side, but there was one of The Pits and also patches of nasty mud. By this time the U23’s are about to get underway (Arno van den Broek having already won the Belgian stripes for youngsters again and Jappe Jaspers for the U19, both of which were raced the day before) and even if you weren’t watching live you will by now have seen the many vids posted of the big pile up at the start. We only had the loud speaker commentary to tell us what was happening and you lot on Twitter! They had to restart, but sadly, without Eli Iserbyt and a few of the guys had to get new bikes from the pits over to the startline so there was a bit of a delay. In the mean time The Guys had stopped for a beer while I went to take a look at the course in the woods.

When I came out they were gesturing wildly that Niels was going by, but I just couldn’t see him, probably because he is not wearing that VGSGP jacket any more. However, when I looked at my pics later what should I find? GPON on phone! Niels radar still working just fine!

At the second start there were no further incidents so it was all on and we headed back round the lake to the sunnier spots where the course runs along the sand. The Guys decided to go from one beer dispensing outlet to another whilst I investigating the wiggly parts of the course as they go through the kiddie playground. You know how much I love the races that incorporate the sand of the kiddie playground in the course and this place is just one huge kiddie playground. I tweeted at the time questioning the wisdom of having these wonderful climbing frames within such easy reach of thousands of pissed Belgians, but thankfully no one was hurt in the making of this championship!

In the race Thijs Aerts had got himself an unassailable lead with Daan Hoeyberghs, Daan Soete and Quinten Hermans fighting it out for the minor placings. I got to the start/finish straight in time for a triumphant fist pump from Thijs Aerts.

The Kevin Pauwels supporters were here in number for some “Hoe gaat het?” and high 5’s, but I don’t know the guy who always has the bike on his head (sorry, no photo. Remind me next time)

Getting a decent pic of the Kleur women was difficult due to the crowd watching, The Crelan-VGSguyshad decided to clean the bikes where the public were coming through, but we forgive them because Nieeeeels who was busy with the fans.

Back on course and all the men went through practising except Kevin! OMG there’s not something wrong is there? I was listening intently to the loud speaker but nothing was said so I had to assume I had just missed him. Bugger!

For some reason I decided to stay put for the entire Women’s Race instead of running all over, but the place was pretty full: the beer tents were groaning and not much space at the side of the course to be had. This is really 4 races in one: Elite Women, U23, Juniors and Newbies, Yep, even in Belgium there are not enough young girls encouraged to take up the sport, but things are changing. Hopefully, all the newbies will stay with the sport into the higher groups and then the organisers will HAVE to do something about this inequality. As it is, following all 4 races at the same time is nigh on impossible from the side of the course. Not quite as impossible as finding the results on the website after, though! The youngsters only rode for 3 laps (I think!). So the Elite was won by Sanne Cant (again! but we are not bored with this) with Ellen van Loy and Loes Sels 2nd and 3rd, U23 by Femke van den Dreissche with Laura Vetdonschot 2nd and Shana Maes 3rd, Juniors won by Joyce Heyns with Jara Noel and Marthe Truyen 2nd and 3rd and Newbies champion is Tess van Loy with Shari Bossuyt 2nd and Tessa Zwaenepoel 3rd.

I tracked The Guys down to the public beer tent by the start/finish. Obviously, I didn’t get to the podium in time for the prize-giving for the women, but I headed over for the start of the Men’s Race. As has been the case for many years, Sven gets double the cheeers, but Wout is proving popular with the Belgian public and they seem quite ready to switch allegiance. My camera did not want to play getting a decent photo of the start so, dear reader, lets head out to the course where i met up with a whole bunch of Kevin supporters, some of whom I hadn’t seen since Tabor.

After the first lap passed a bit of a spat happened on the course opposite us. No idea what that was about, but a young guy and an old man ended up rolling together in the sand and a policeman came to sort them out. You can all call me a liar though ‘cos I didnt take a pic of that either! The things people do when your camera is playing up!

As most CX fans are interested what happens at the Belgian Champs I will assume most of you will have seen the race on TV (unlike the Netherlands – what’s that about Netherlands TV?). I watched most of it on the big screen from across the lake in the kiddie playground, running from one section to another and getting an OK view.

DISASTER! Kevin manages to hit a pole with his hip going round one of the sand hairpins. That’ll be a nasty bruise. Knocked him back a few places and it was GAME OVER for his chances at the stripey shirt. Laurens Sweeck played a solid game for his second place, but it was touch and go between Sven and Michael Vanthourenhout for a while, but it was Sven who’s experience showed in the end. There was also another race within a race here and it was Joeri Adams who got the DrieKleur for Elites without contract.

I did make my way to the podium. but there were quite a few people in front of me and huge Sven banner! 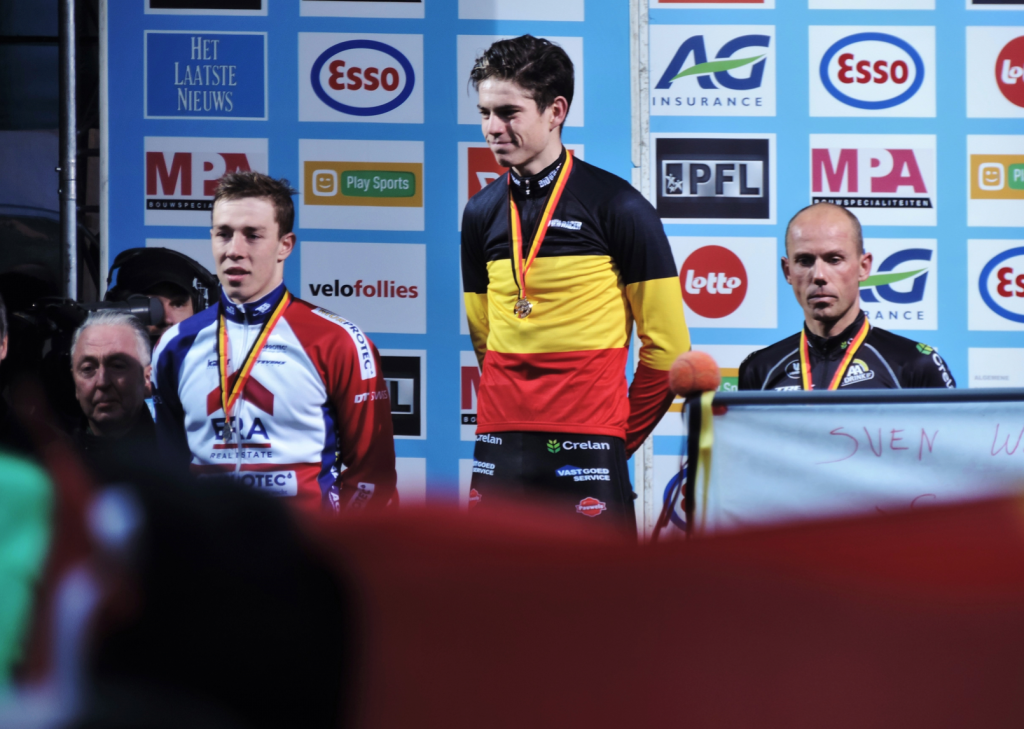 The K-Pauw supporters were a little downhearted, but we agreed that it was rainbows we wanted anyway!

The beer tent would be going for another half hour or so and the DJ’s were doing their thing (not quite as loudly as at Diegem, thank goodness). The Guys were talking politics as you do when you’ve had a few, but not the one who was driving, I hasten to add! And so to head homeward after a fantastic day out.

On the way home we went over the (Niels) Albert Canal by the docks and I have to say it’s super impressive, but again no photo 🙁

The CX Circus travels to France next and I shall be watching that on TV. Next action will be Hoogerheide and a new and exciting course. Maybe I should take my passport in case they won’t let me back across the border!