Post-race reactions and images from day one, the UCI C1 races, of the 2017 Jingle Cross in Iowa City, Iowa. 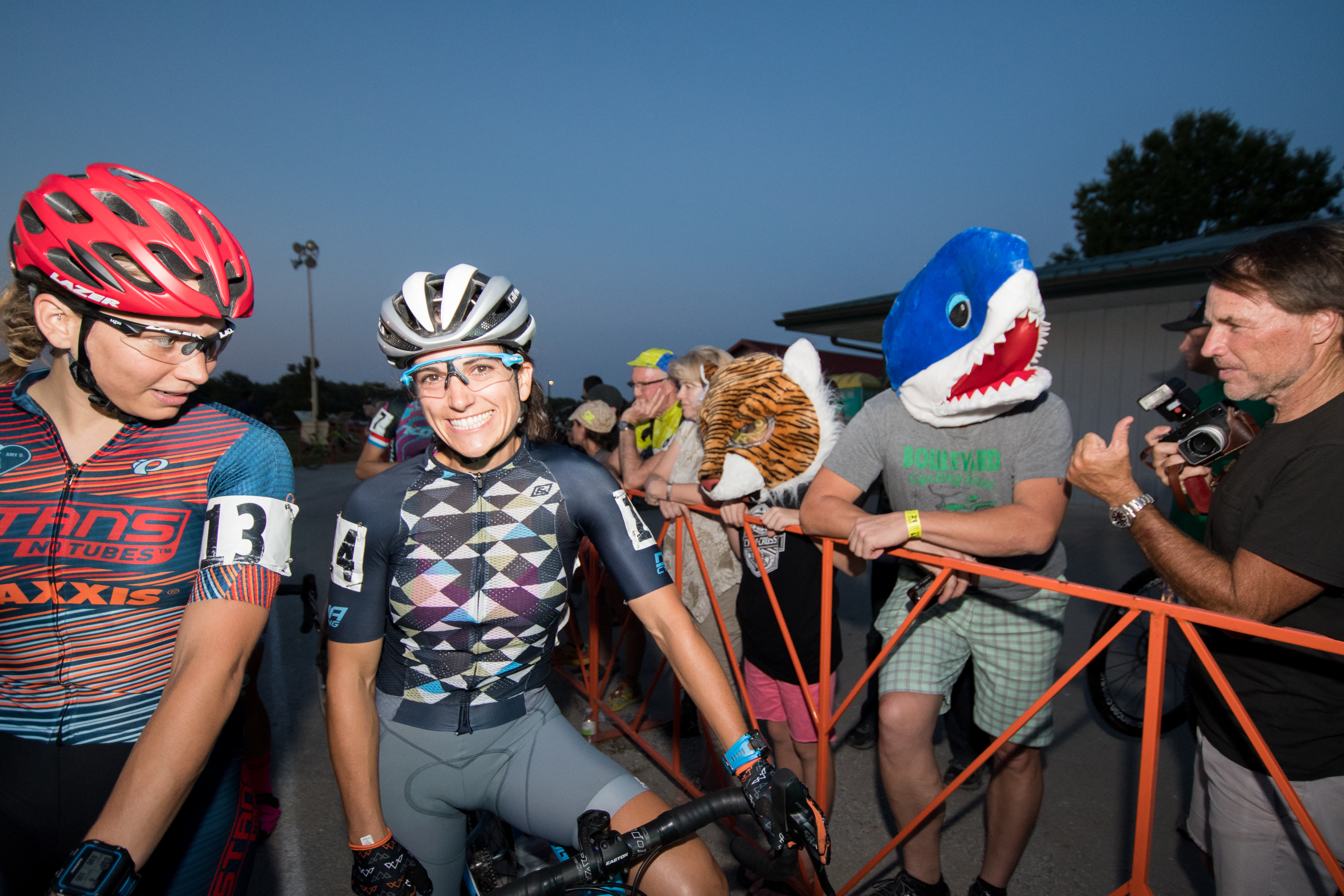 Courtenay McFadden: Oof. It was kind of a mind game. I didn’t really know where my fitness was gonna be and so the biggest thing for me was not to go out too hard and completely blow up. I just tried to stay consistent to the best of my ability and kind of take it from there. Emotionally, toward the end of the race when I realized where I was and how I was doing it became kind of emotionally overwhelming … it was the emotion of “Holy crap. I really did that!” Four months ago I wondered if I was ever going to remount my bike again without pain or to be able to stand up out of the saddle and sprint without pain. And so it was this moment of ecstatic-ness … like: “OK, I’m here—I can do this.” I put in so much work in rehab after surgery to have a strong hip again and find that stability that you lose after surgery. All the hours I spent not being able to do anything is just extra fuel to the fire to wanna fight more when you are out here. 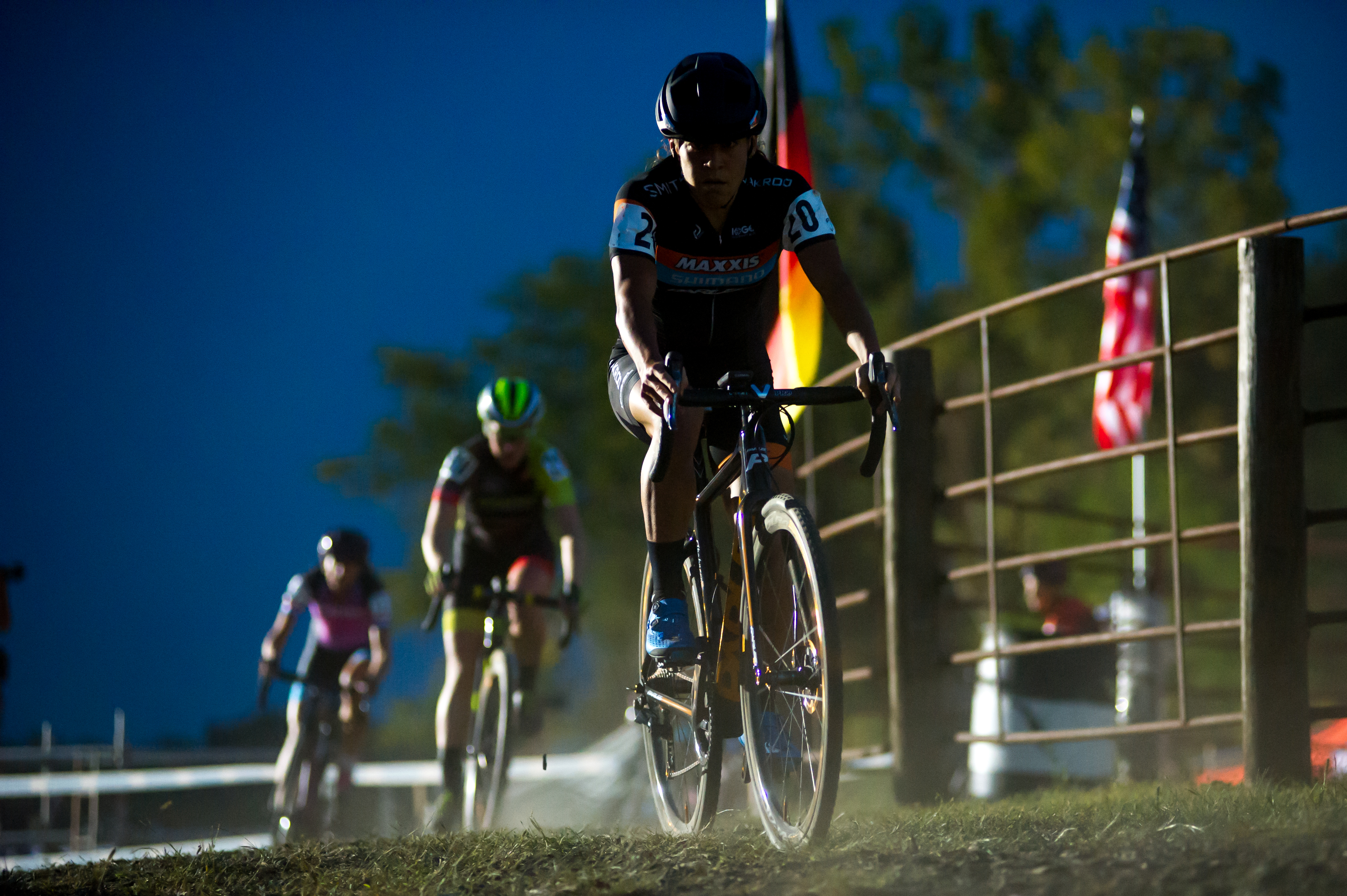 Crystal Anthony: It went pretty well. I had a good start and kind of lost some places around the first corner where it got bunched up. I had to work my way up to a chase group. There was four of us: Helen Wyman, Ellen [Noble] and Annika [Langvad]. We rode together for most of the race. They pulled away on the last lap but it I was happy with how I rode. I felt good and I’m looking forward to tomorrow [Sunday’s World Cup]. 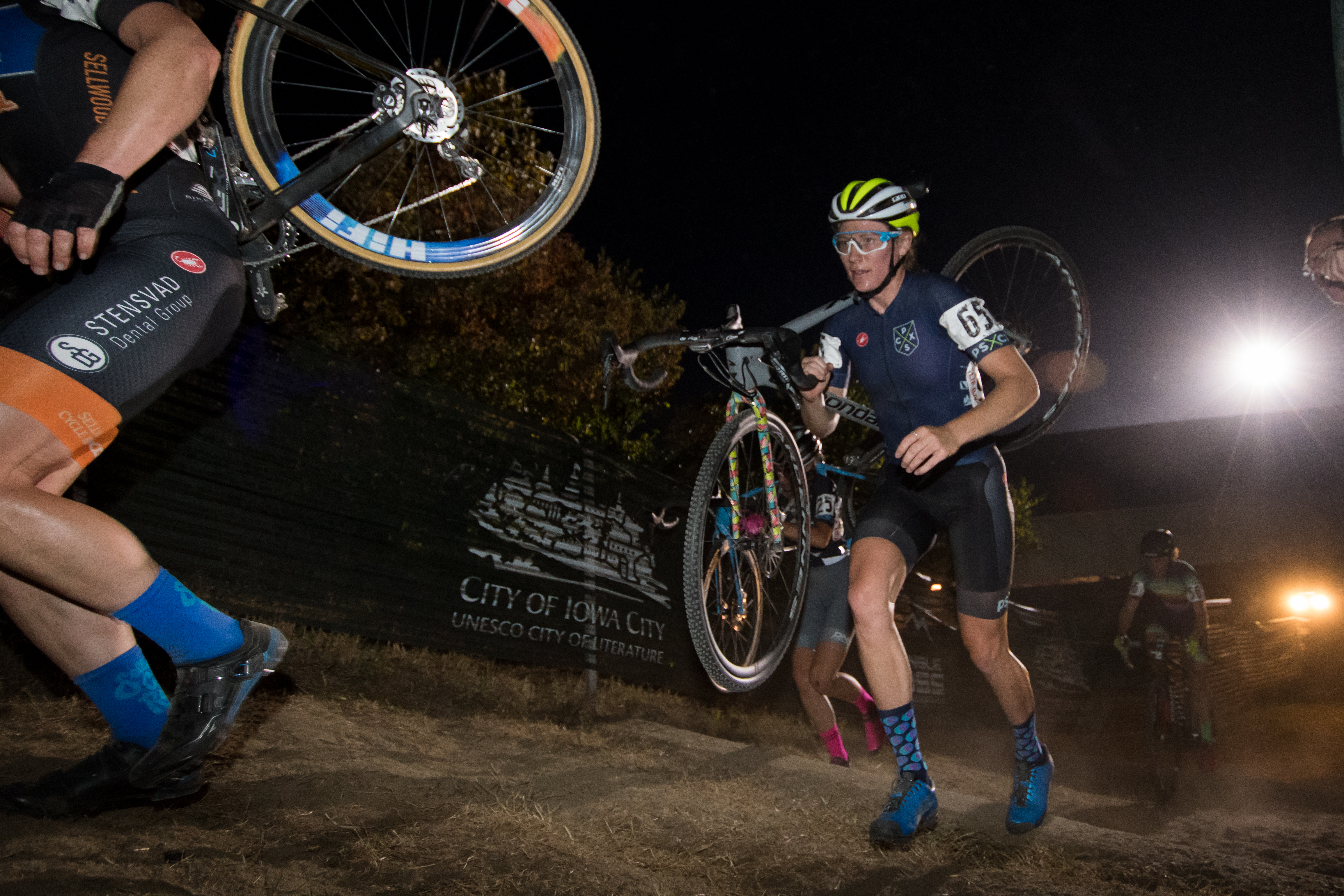 Lily Williams: It wasn’t super. I went out way too hard. I did two C2s last year. The ones in Hendersonville [N.C.]. I did OK. But this was definitely a lot different. It was really great practice and I’m happy I finished on the lead lap, but it was very evident where I need to improve … pacing for sure. I was staged DFL and I panicked and [moved up] to 16th or 17th after three-fourths of a lap. And then I was too tired. I couldn’t reach my top end again after that. That’s the main thing. Today [Saturday] this off-camber descent is really worrying for me. I’m not really great at the technical stuff yet, so we’ll see how it goes. 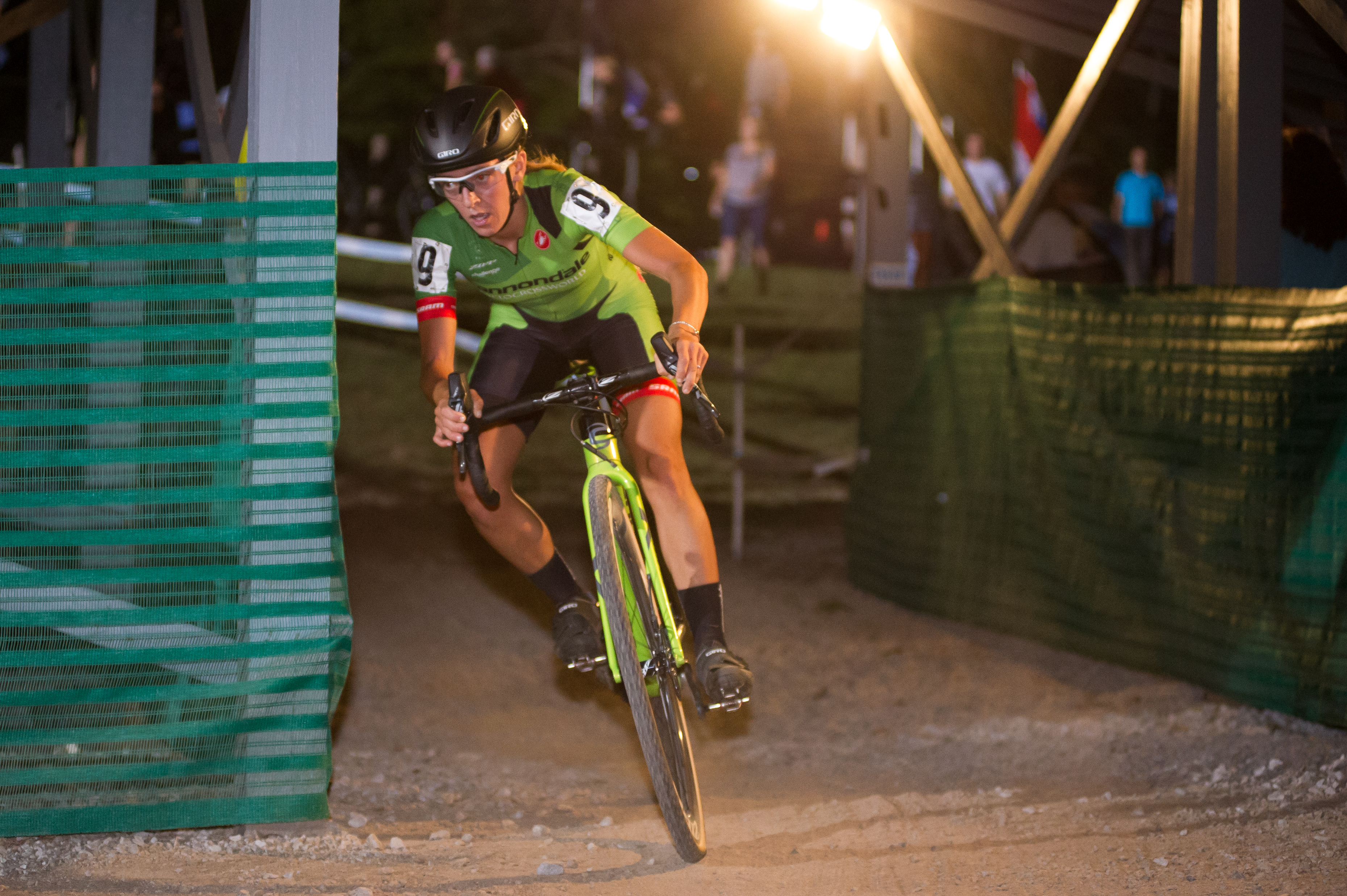 Kaitie Keough: The first lap was good. I was really aggressive and I was positioned well. I think I was in 5th or 6th in the first half lap. And then going into lap two I was with Ellen Noble and Katie [Compton] had a bit of a gap and I was like, ”Ah, no. It’s too early for her to go,” so I bridged up to it pretty quick and got to her and I rode with her for the whole race. We went back and forth a little bit taking turns on the front. The last lap, I wasn’t really trying to get a gap but it just kinda happened on Mt. Krumpit. I noticed I had it on the descent and then I just kept going. I’m happy with it. I’m super excited and I’m looking forward to tomorrow [Sunday]. 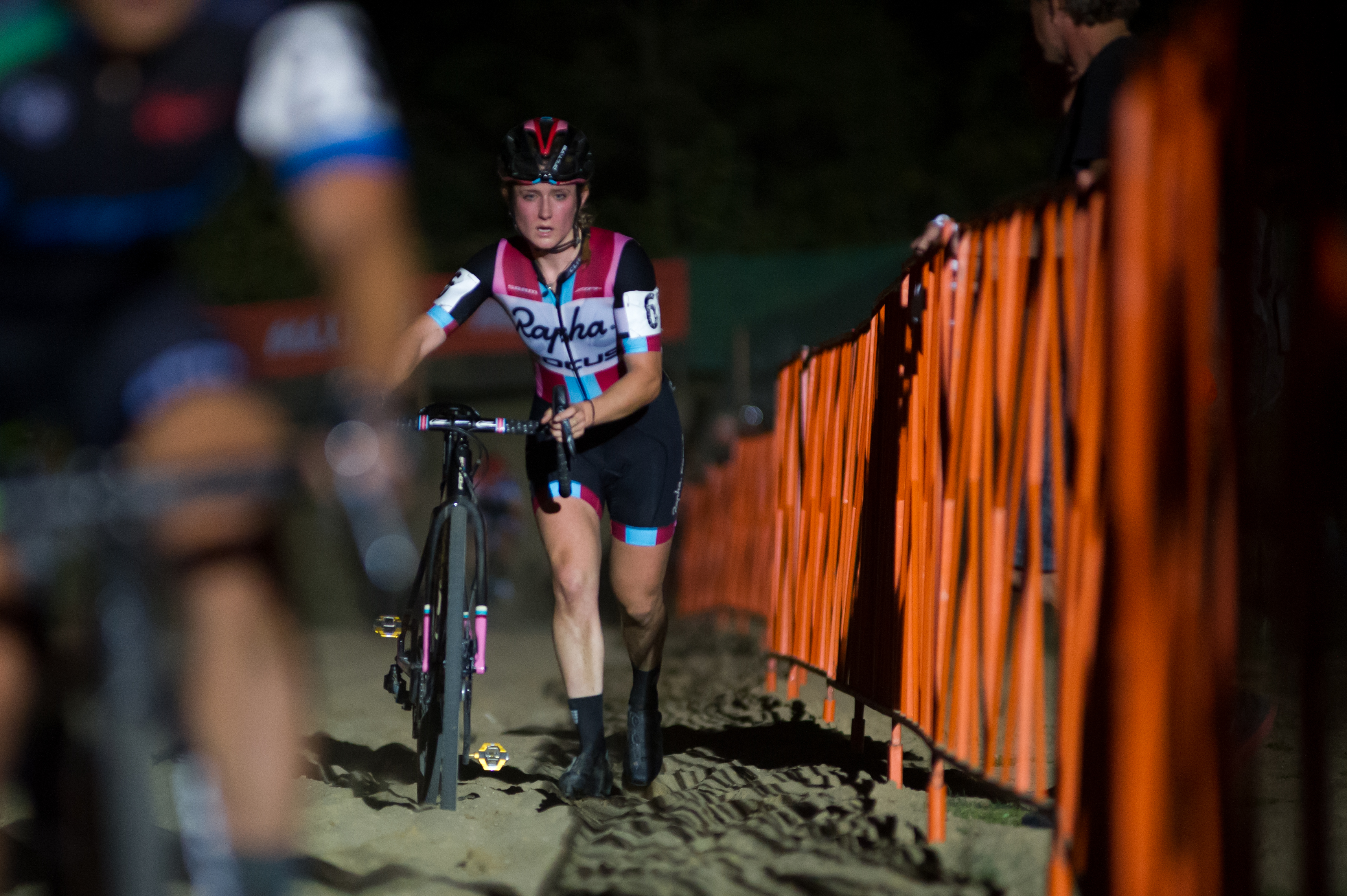 Ellen Noble: I had a good start and then I ended up crashing right after pit two. And unfortunately that kind of threw me back a bit but I had a bit of adrenaline from it. I chased back up, I was in 3rd, I was feeling good. And then I blew up. I fell back a lot but I chased back up to 12th. So, it was an unfortunate ride with a lot of bad luck and a lot of little things going wrong, but I’m happy that I didn’t give up and I kept chasing. And in a field like that 12th isn’t all that bad … I was able to hop the barriers and that gave me a boost of confidence. That kept my head in it and I was like, “If you can do this, then you can race this race. Just get it done.” 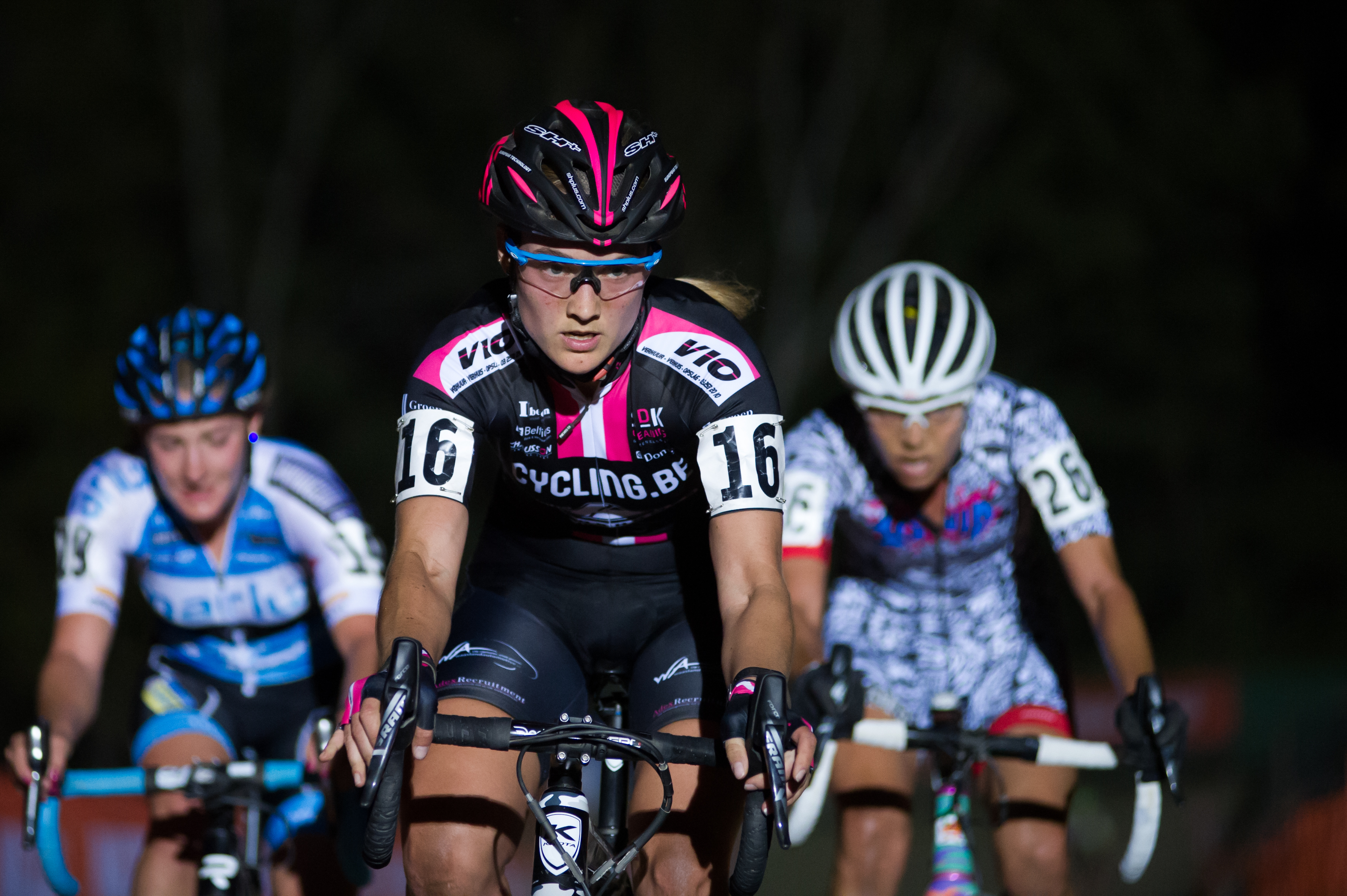 Elle Anderson: My race unfolded a little differently than I expected. I was so excited. It’s really the first race of the season. And I was so pumped to be on that start line. I really like the night atmosphere of the Jingle Cross Friday night race. To see so many competitors from Europe, it was so exciting. I was just so 110 percent ready to go. I had a great first two laps and then I died. 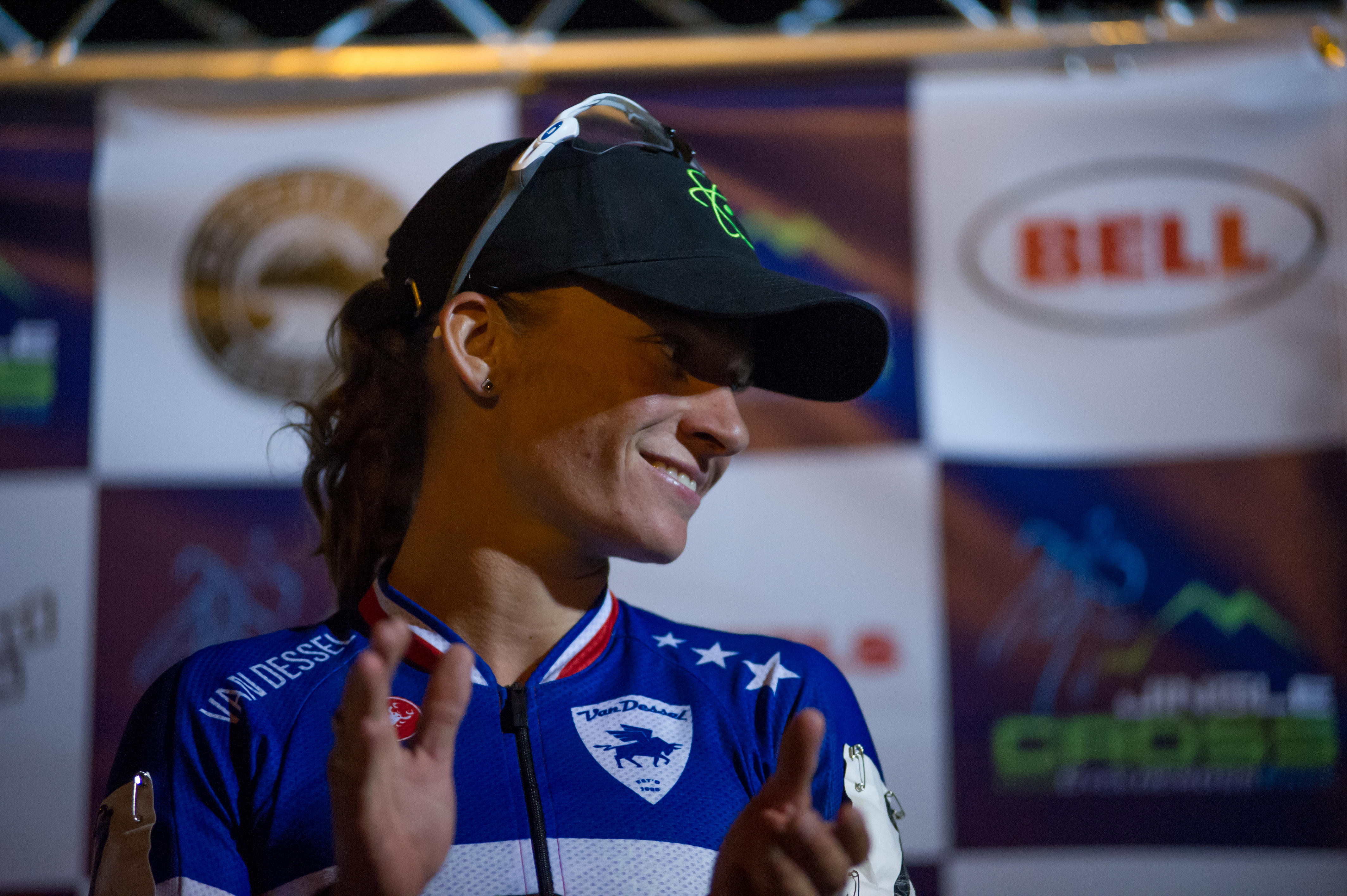 Caroline Mani: I got a decent start until the first corner where I got a little scared and so people just passed me. I got stuck behind a big group so I was top 15, maybe farther away. I don’t know. I just felt like I was far [behind]. I was seeing a lot of people in front of me. I didn’t feel super comfortable at the beginning. I just couldn’t pass people. At some point I was like, “I really need to pass this group.” Just to keep moving. The legs felt better and technically I was pretty comfortable. The run-up is a good section for me and I was still strong enough to drop people. I was pretty surprised when people said, “Hey, you are only 15 seconds behind the lead group!” I had no idea I was [in position for the] podium. It was kind of cool to just be like, “Oh, shit! I’m podium now.” And then I saw three laps to go and I thought, “That’s too long. They probably messed it up.” I thought they’re probably gonna correct the laps but then, no, they did a pretty long race. I think that’s one of the longest races I’ve ever done. It was kind of scary having six people behind me chasing me, but I maintained the effort and made sure I wouldn’t make any mistakes. And, yea, I got podium so it feels good. It was a little challenging this summer, so it was good to see my fitness is not too far behind. I still have a lot of work to do. 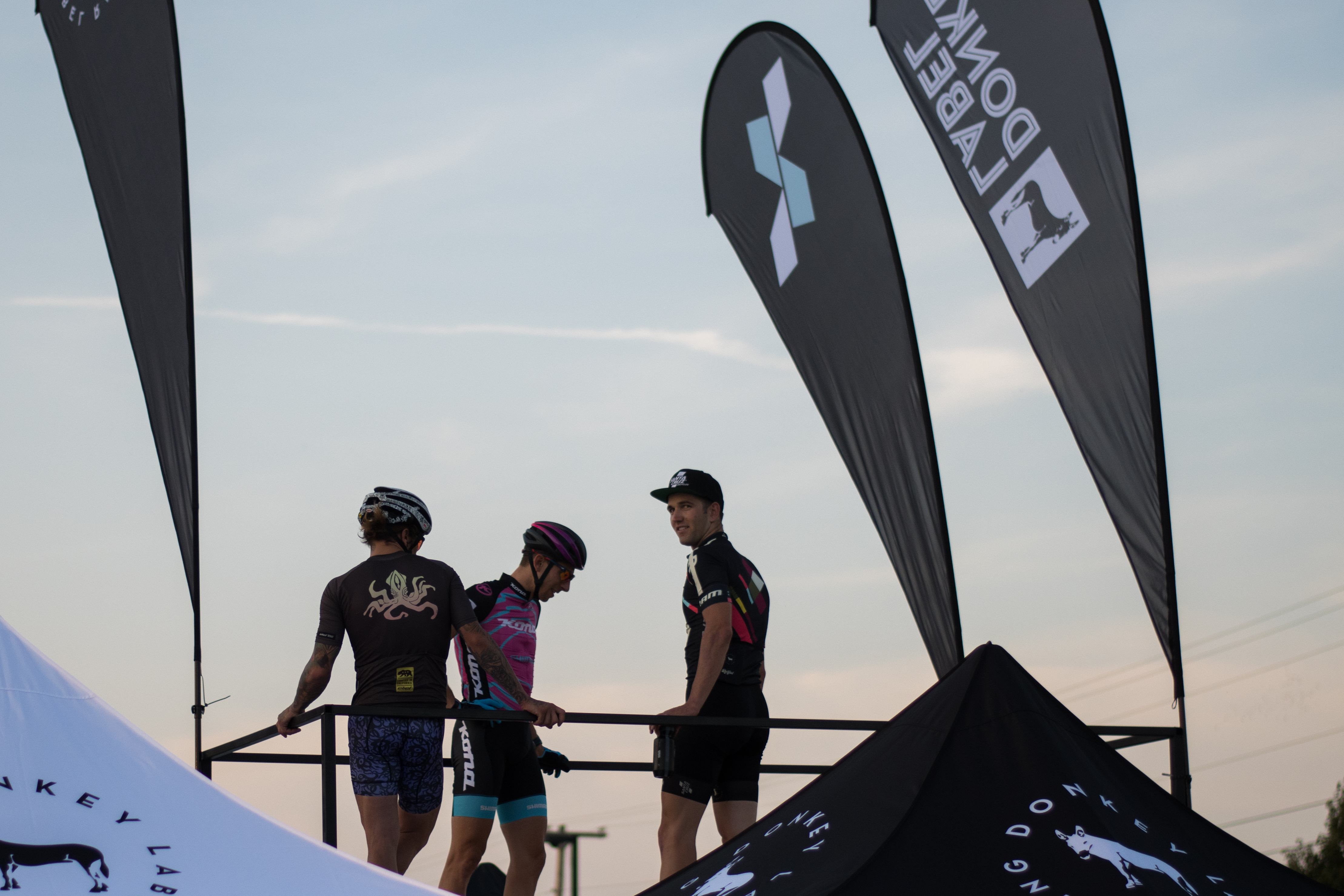 Anthony Clark: I was on the start line and I was third row, so you know what, we’re gonna start hard, try to make a group and then settle in. And then I flatted right away. But that was okay because I only dropped to, like, 20th place. And then I was like, “It’s all right. I feel good.” And then on the run-up I would try to pass a couple people at a time. And then the next thing I knew it was two laps to go and I yelled at our mechanic [Chris Namba] in the pit, and I was like, “Namba, where am I?” And he’s like, “13th!” And I was like, “Ooooooooohhhh! Siiiiikkkkk!” And then I shredded the last lap. Had a little mechanical. Calmed down. And then I was able to hold off Jamey [Driscoll] for 14th. 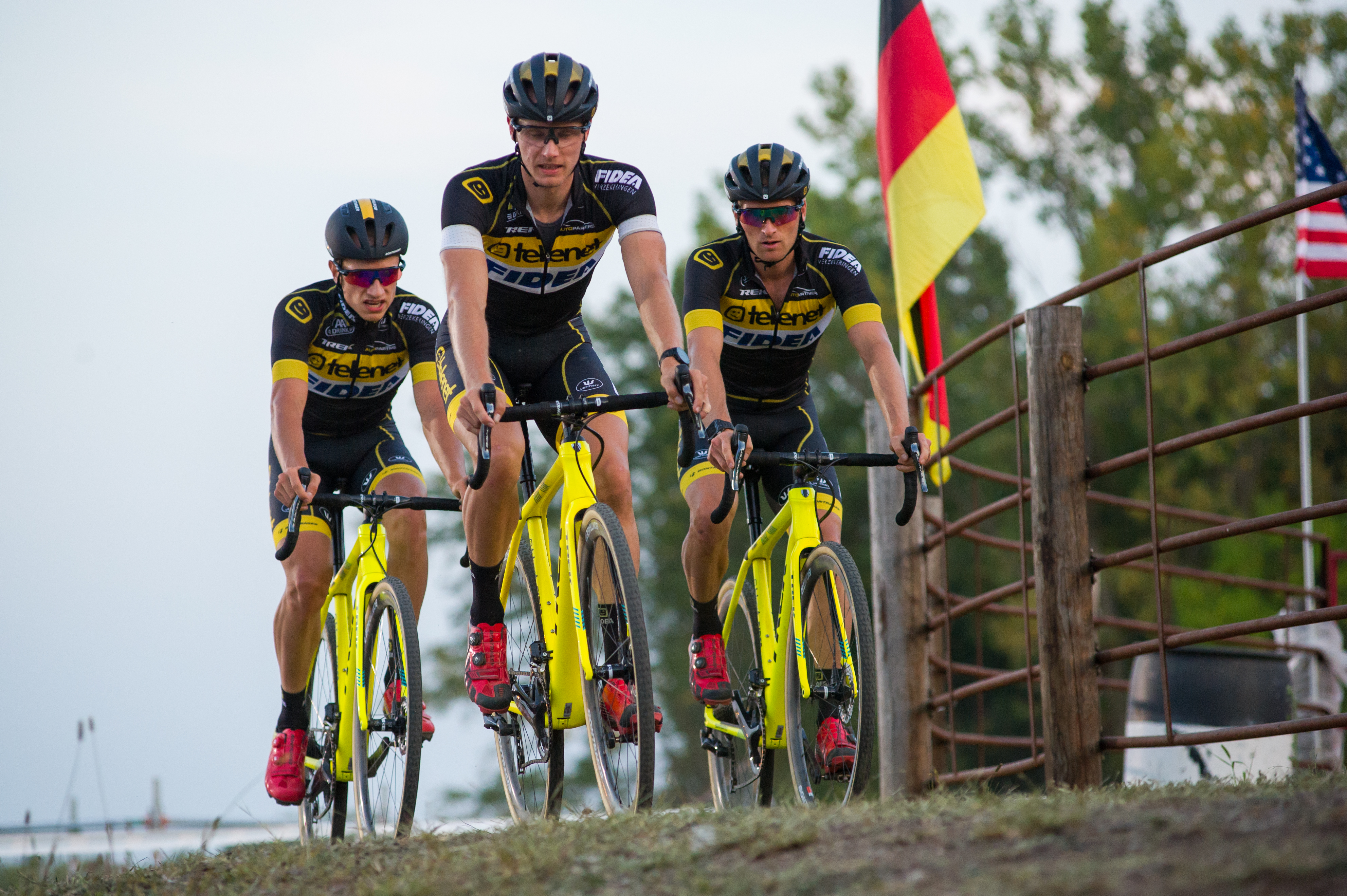 Quinten Hermans: I had a good start and I just kept on pushing. It was quite good for me. I was in the front and I didn’t make a lot of mechanical mistakes which gapped me from the other riders a little bit. And that was good because the other riders had to go full gas on the straight lines to catch me back. And I could try to get the technique perfect and try to ride away from them. And then Laurens [Sweeck] and Michael Boros came with me and Laurens just went full gas. I just couldn’t follow him. It wasn’t much, but I started losing a little bit of time on him, but I gapped the other riders also so it was a good race for me. 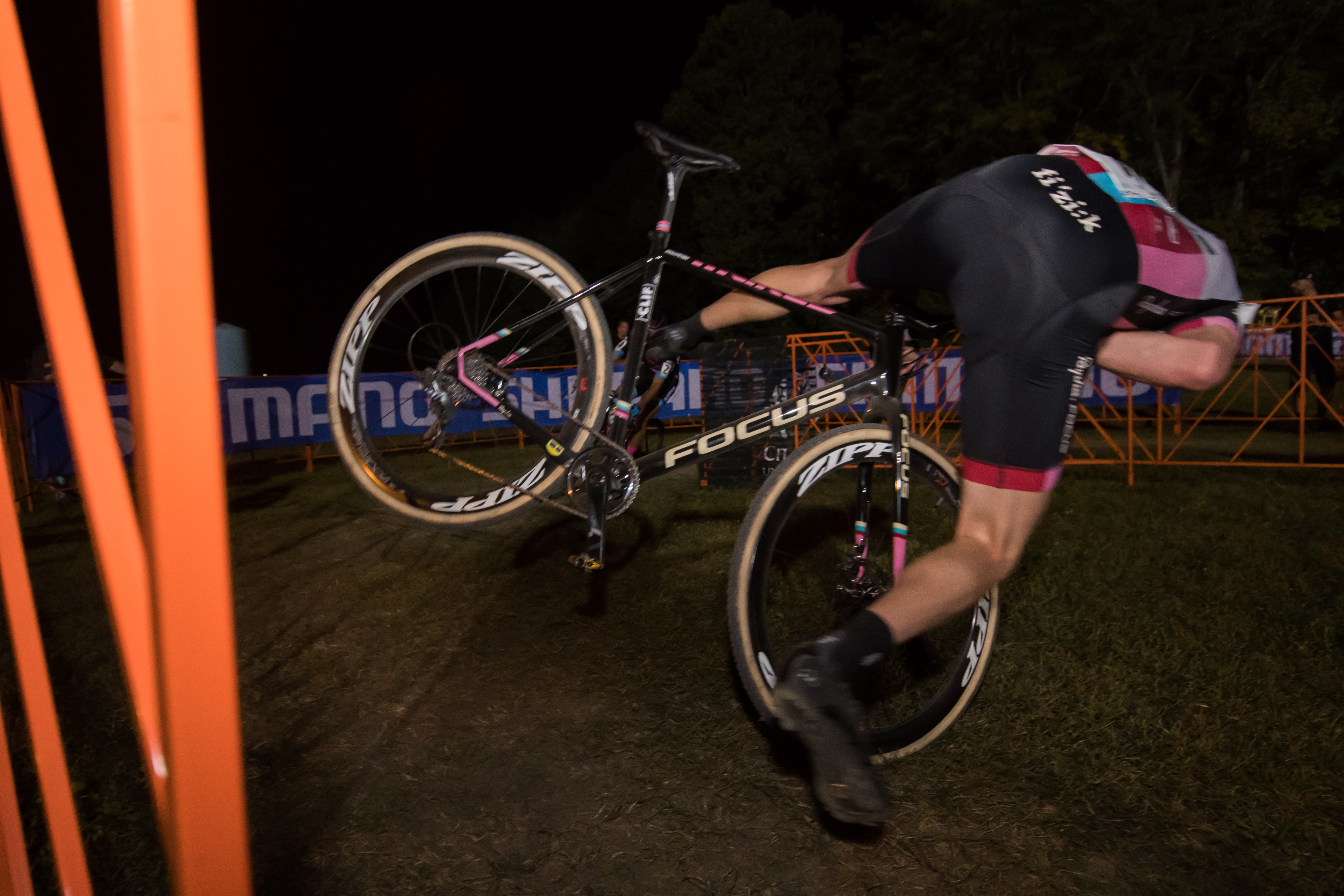 Spencer Petrov: I just clipped my pedal. I started pedaling a second too early and I almost corrected it. It was weird because if you clip your pedal you kind of slide out to the side or you get hiccuped. I almost brought it up but then somehow I kind of kerfunked it and found myself flipping over the bars. It was annoying because I had just caught that group of maybe around top 10 and I had started third, fourth row so it was a moving-up game. And I was feeling really good but that kind of tossed my rhythm. After about a lap and a half I found my rhythm again. Then we were going into Mt. Krumpit. There was a rider in front of me and he was in the center line and he was gonna run so he dismounted before the two logs. And then I was gonna go on his right, the outside line. He gets off and then instead of going straight up the hill he goes out. He goes sideways. I’m hopping, riding over and comes into me with his bike and smashed one of my wheels and crunched it … Definitely, it was a day. 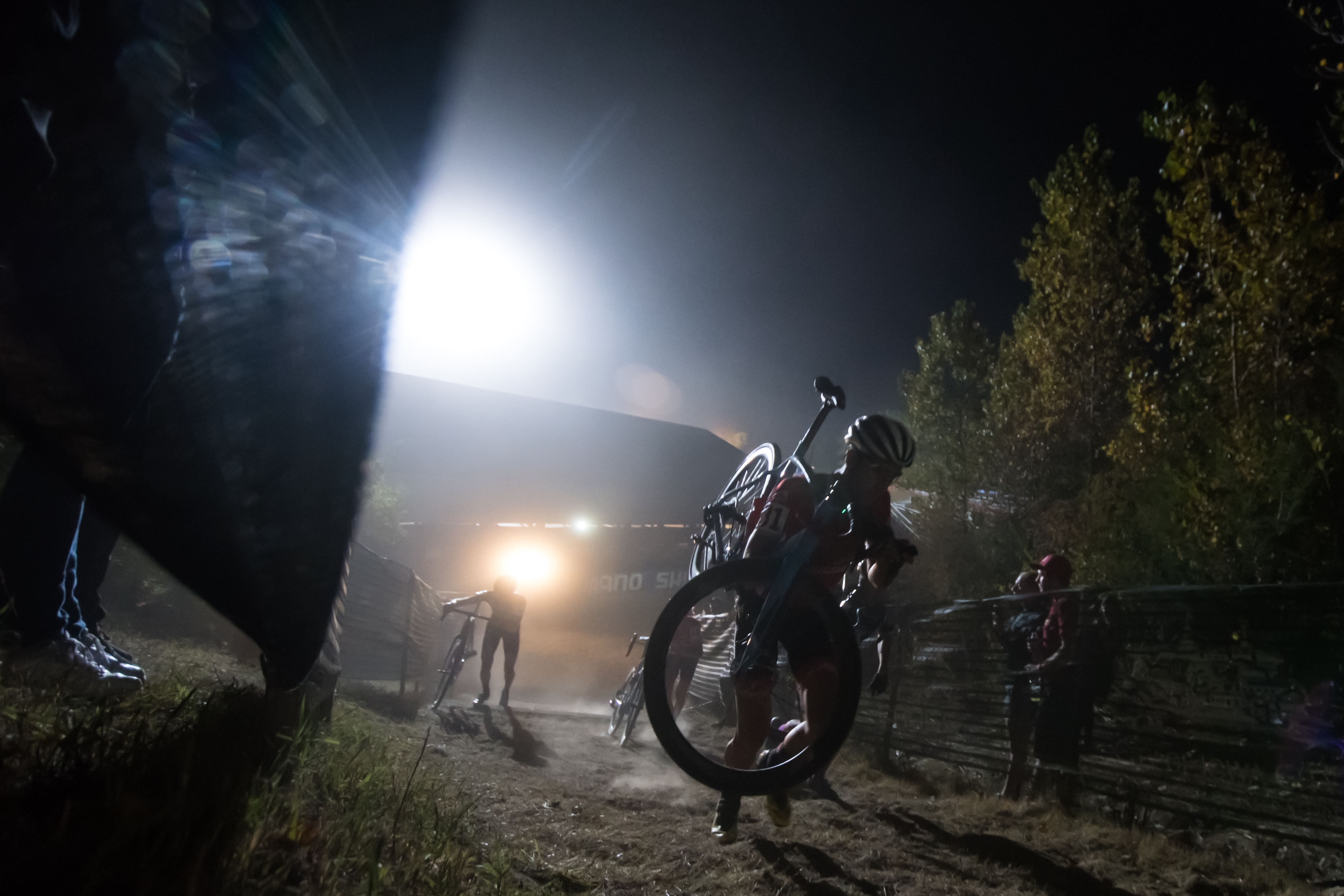 Jamey Driscoll: It was just blazing, blazing fast. I would say not the fastest people necessarily in this race but I would say the fastest conditions I’ve ever had in ‘cross. Just rock hard. Living in Utah, that’s normal but for here it was crazy to see. The Euros just blasted off. I wasn’t feeling a hundred percent and I fought to avoid the pile-ups and be smooth myself. I was able to ride a consistent race. I picked a few people off that were fading at the end. Not super pumped with my result but not displeased either. Just a good tune-up for [Sunday’s] World Cup and just more pumped for my teammate [Lance Haidet] to get 13th. That’s an awesome result for him. 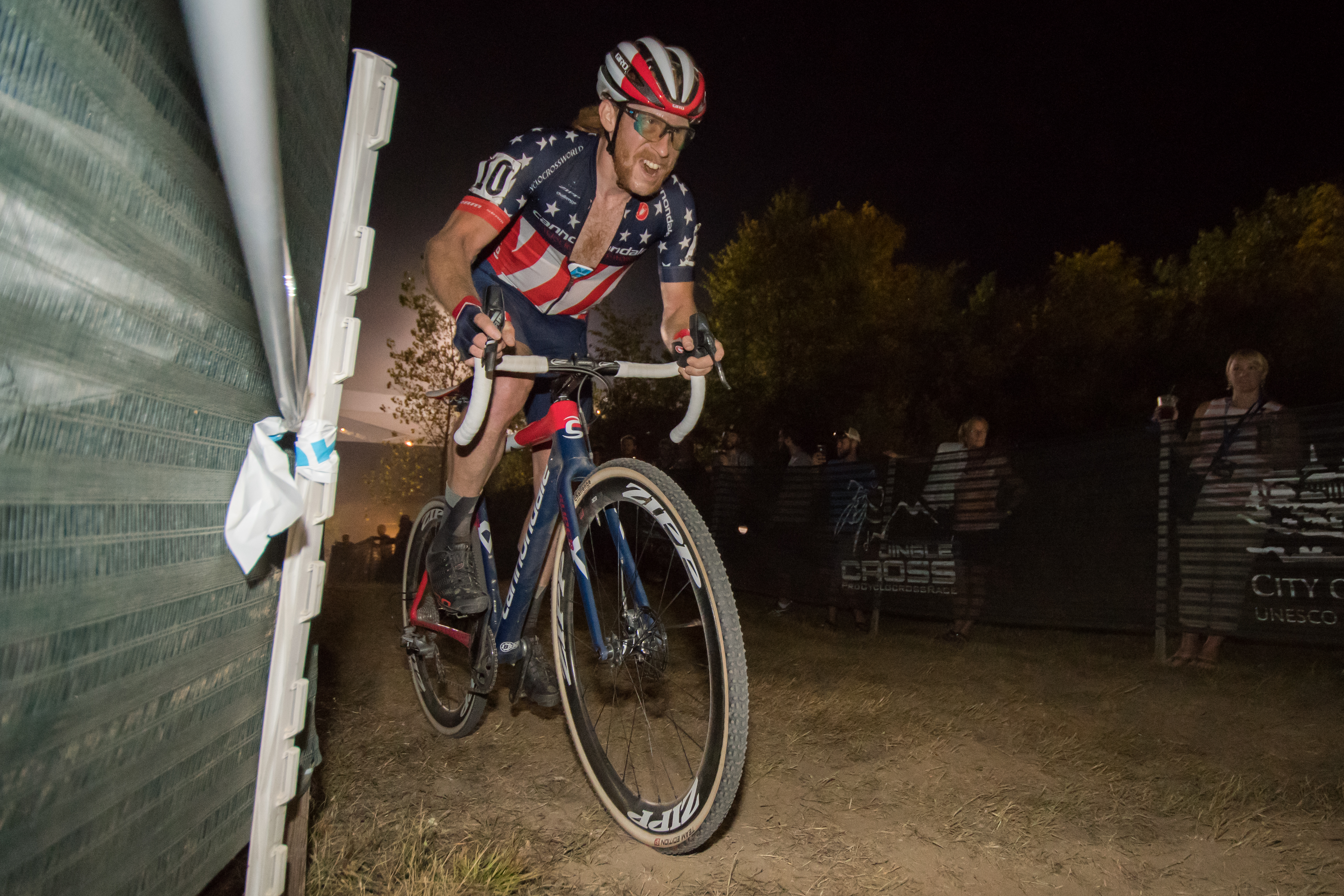 Stephen Hyde: It’s the second race weekend and this schedule’s a little weird. You know, Saturday, Sunday and then again Friday. I know it’s only one day off but it does make a difference in the training and how we do it. And then add the travel in there … I did my training a little differently and I used Friday as a kind of an opener for this weekend (the World Cup). So it was a little bit of a slow start for me. Which I was totally fine with. I was patient. I knew that I needed to get in there and get some intensity with those guys and remember what it’s like to pedal that hard. I felt really good and started to open up. I made a tactical mistake in the end when I was racing with Corné van Kessel and he got that separation. But I was hoping for 7th and I got 8th. Totally fine with that. 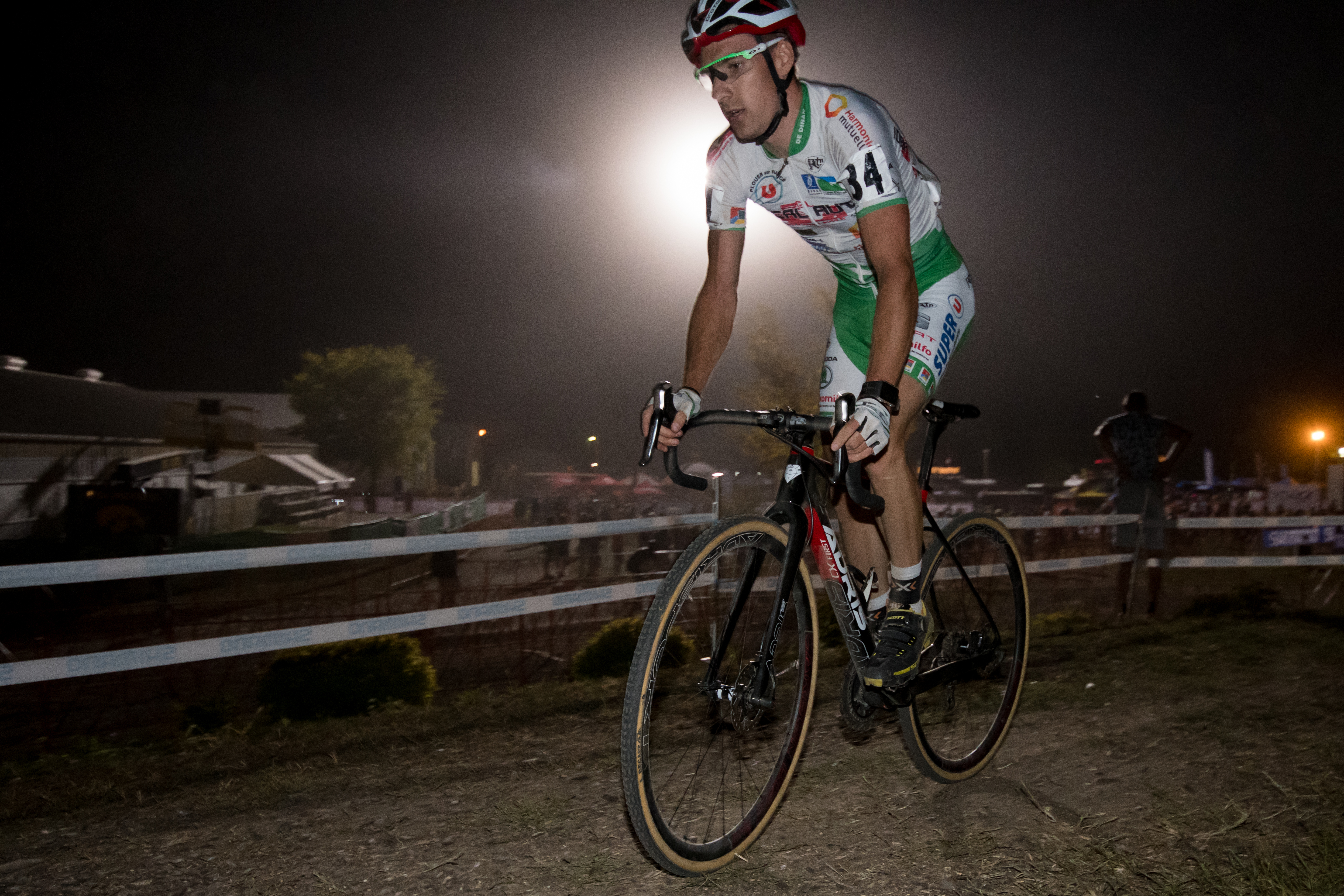 Matthieu Boulo: It was a good départ for me. Just the one crash after two laps. My saddle broke. It was repaired. Then full gas …

[Did find the course hard? The parcours?] It was difficult, yeah. Very hard. 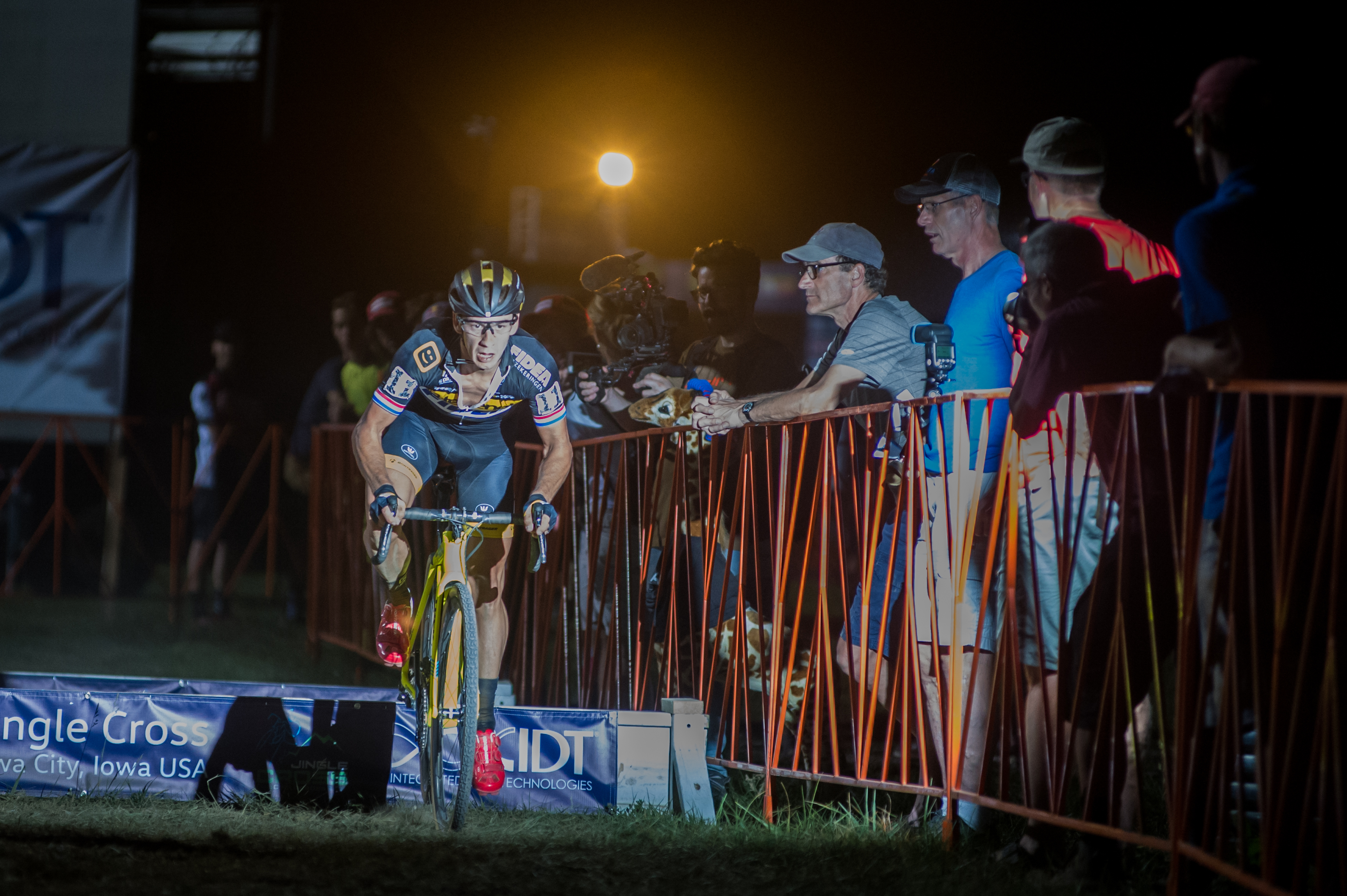 Lars van der Haar: I was really nervous in the beginning. The first two or three laps I felt really bad. I thought I was gonna have the holeshot so I kept back because I didn’t want to have the holeshot. But that wasn’t so smart because coming from the second line wasn’t so easy. I should have taken it. And then I just let them go for a bit on purpose so I could start my own pace and then come back. But then those two were gone and I just waited for third place.