The second round of the 2017-18 Telenet UCI Cyclo-cross World Cup took place at Trek headquarters in Waterloo, Wis. The umbrellas came out as the Elite Women lined up in the starting grid. 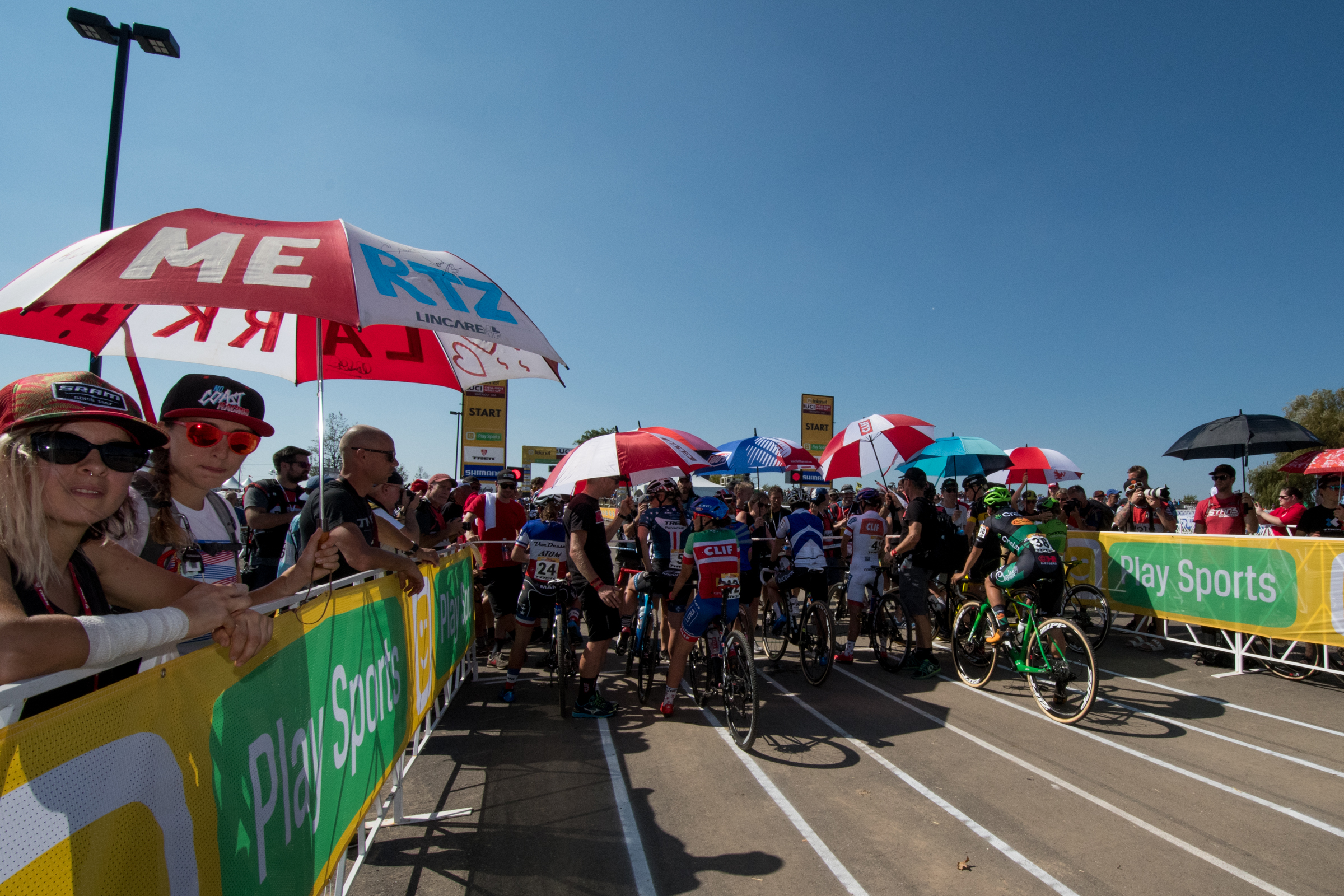 It was breezy and a few degrees cooler than Friday’s C2 race, but still unseasonably hot. There were plenty of ice socks, a few ice vests and lots of umbrellas to keep the sun off. 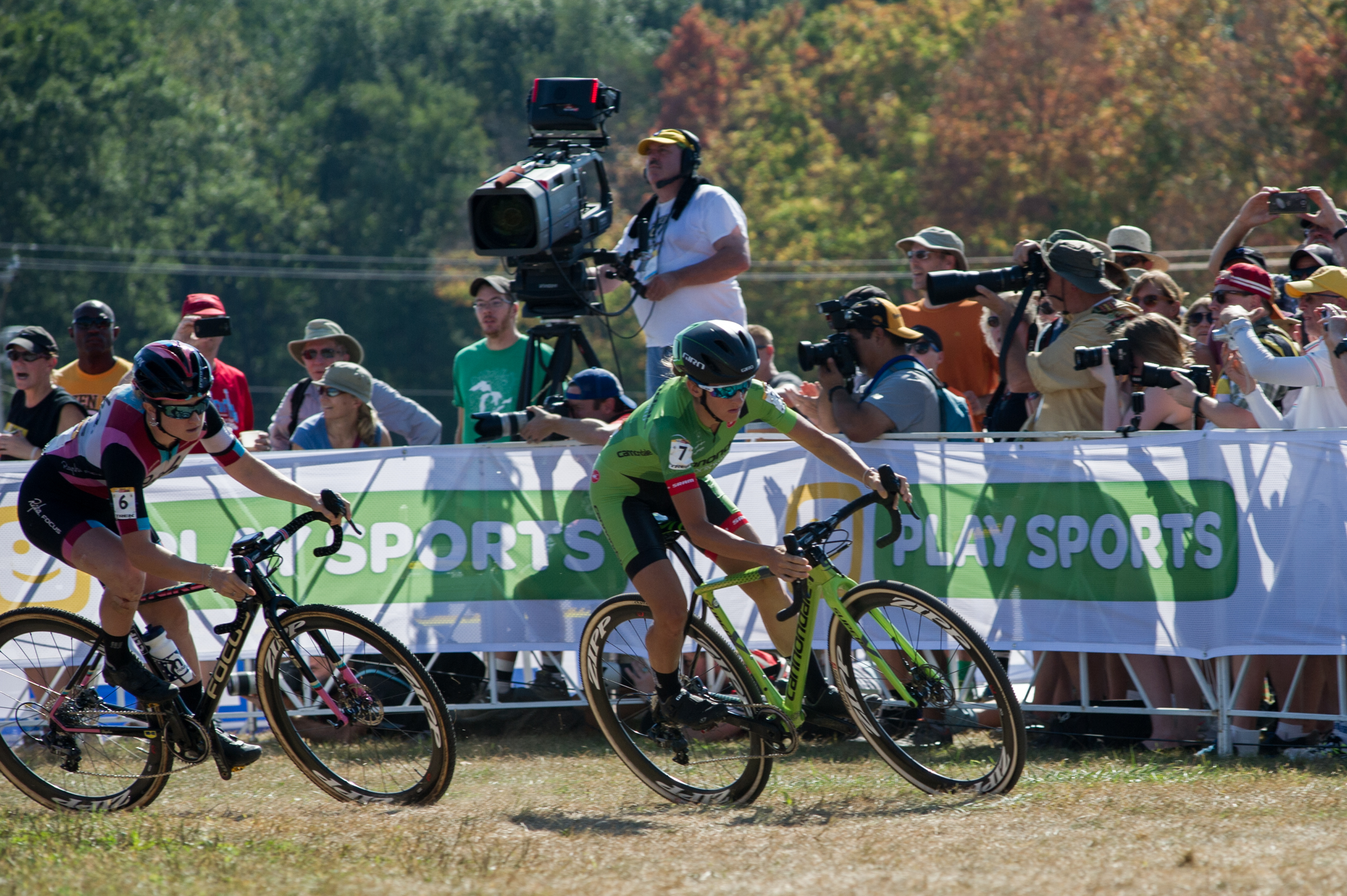 Kaitlin Keough takes the holeshot ahead of Ellen Noble. Wisconsin native Keough uncharacteristically took the holeshot and led for most of the first lap of the race. 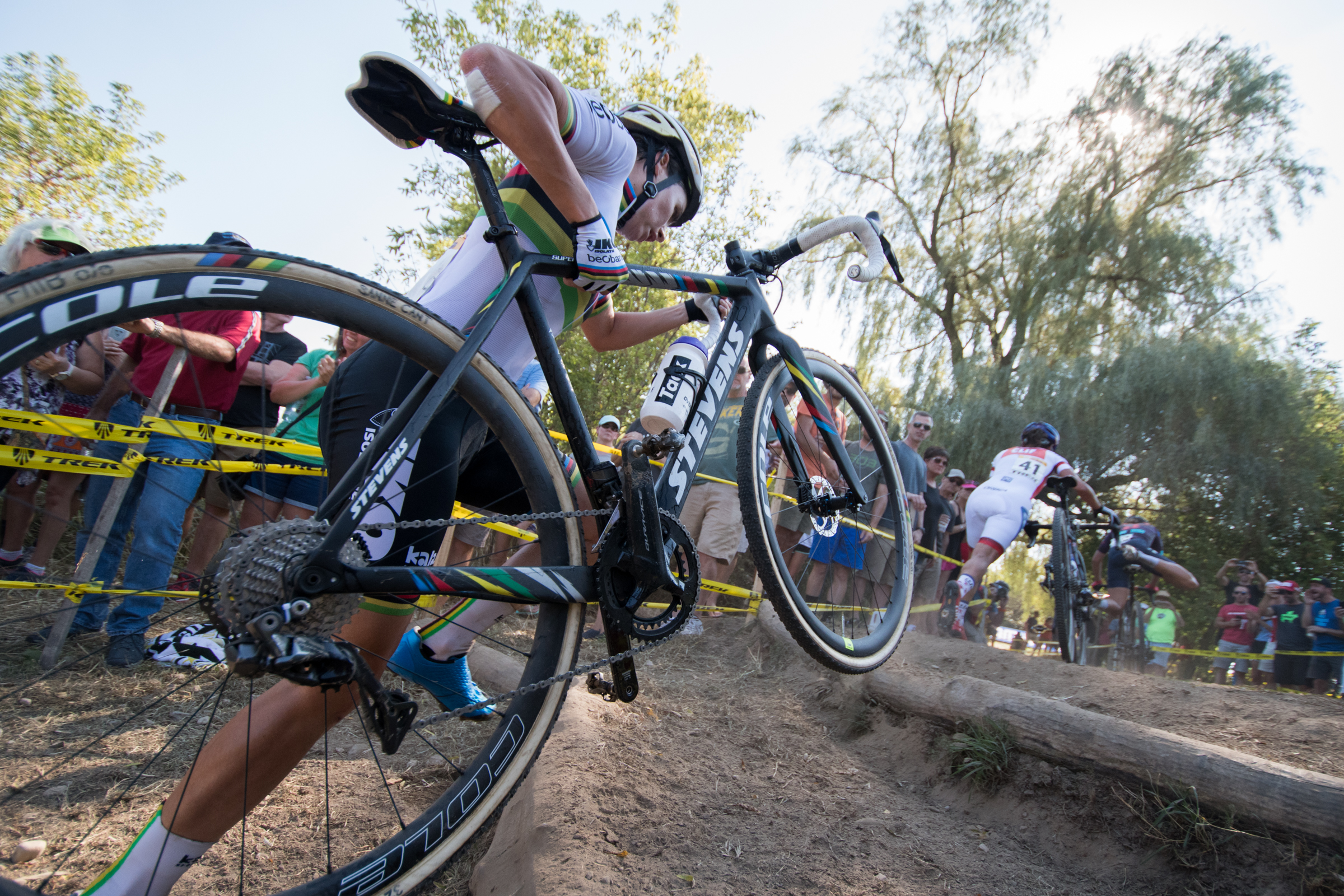 Sanne Cant runs up the logs. At this point Cant was in a chasing group with Katerina Nash and Sophie de Boer as Ellen van Loy led solo off the front of the race. 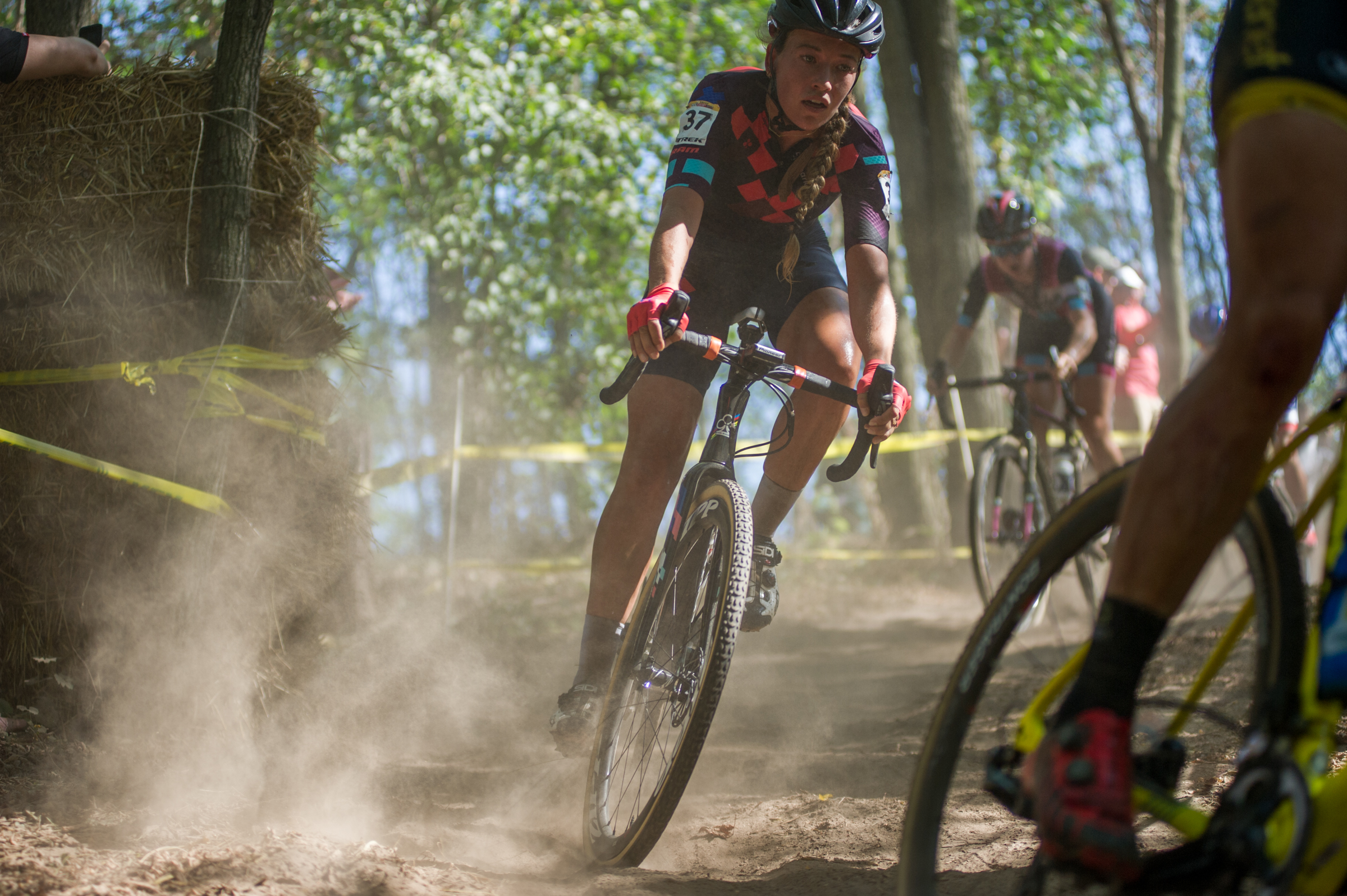 Sophie de Boer in the woods right on the wheel of van Loy with eventual podium finisher Ellen Noble right behind her. 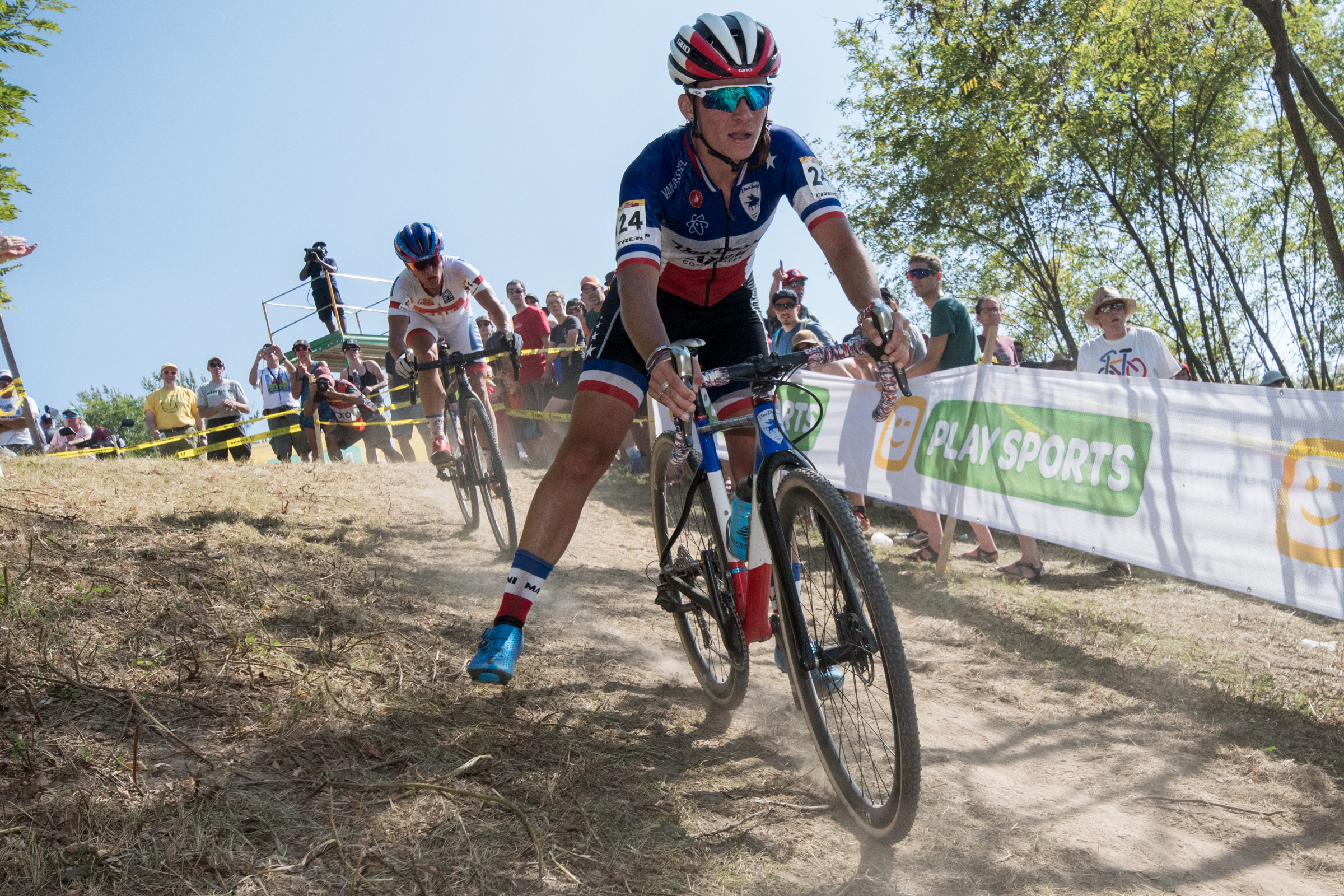 Caroline Mani on a fast, steep off-camber. Mani finished in 5th place just eight seconds off the podium and 6 seconds ahead of Nash, pictured just behind her. 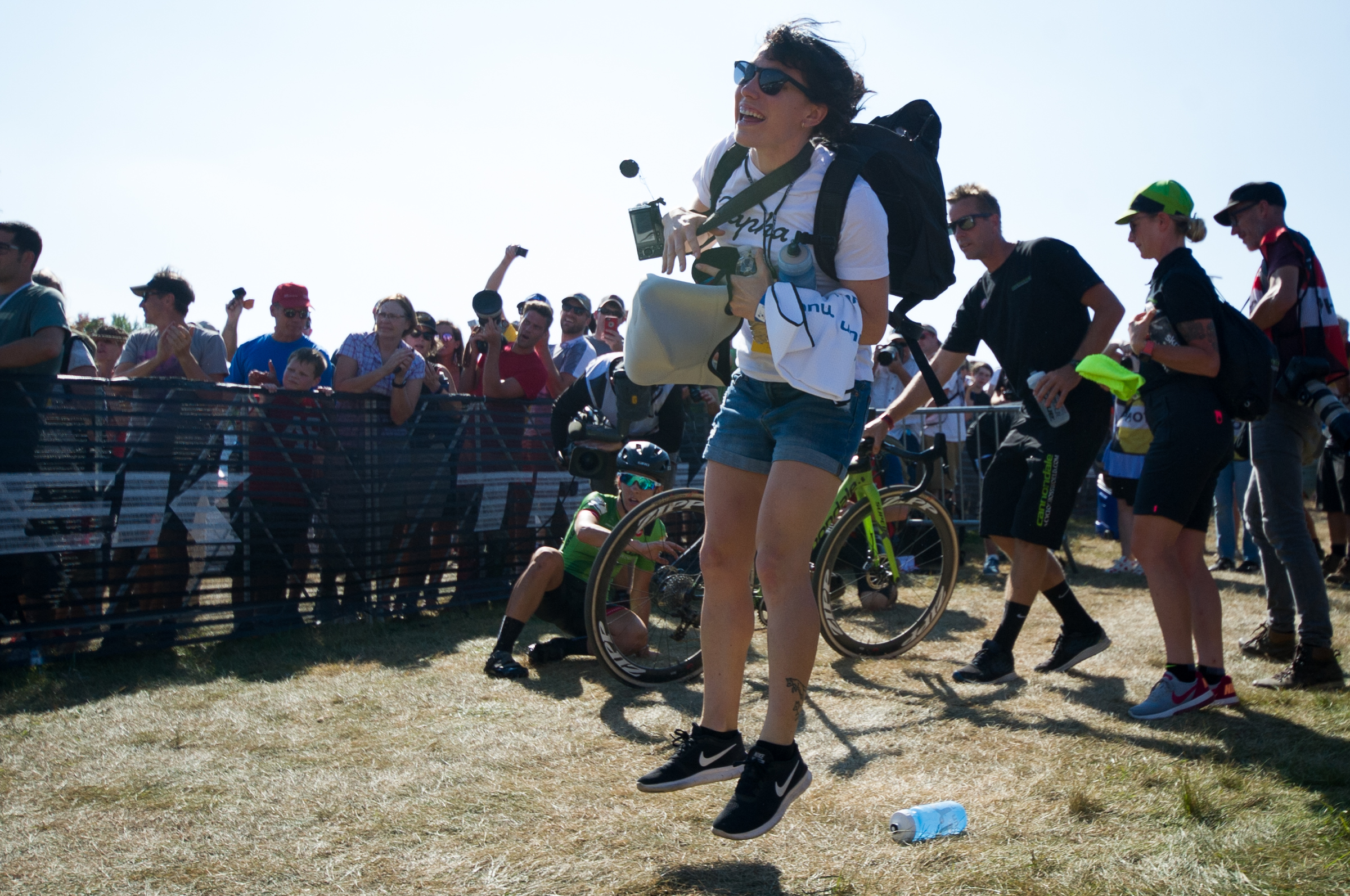 “I’ve gotten to watch Ellen [Noble] grow up in CX—I was at the first clinic she ever went to, I’ve interviewed her dozens of times, we’ve traveled together for the last two years—so to get to be there for such an amazing result for her, especially in a sprint, was more emotional than I expected! If she had had a gap, I might have played it cooler … but it was freaking exciting.” —Molly Hurford, Team Manager, Aspire Racing 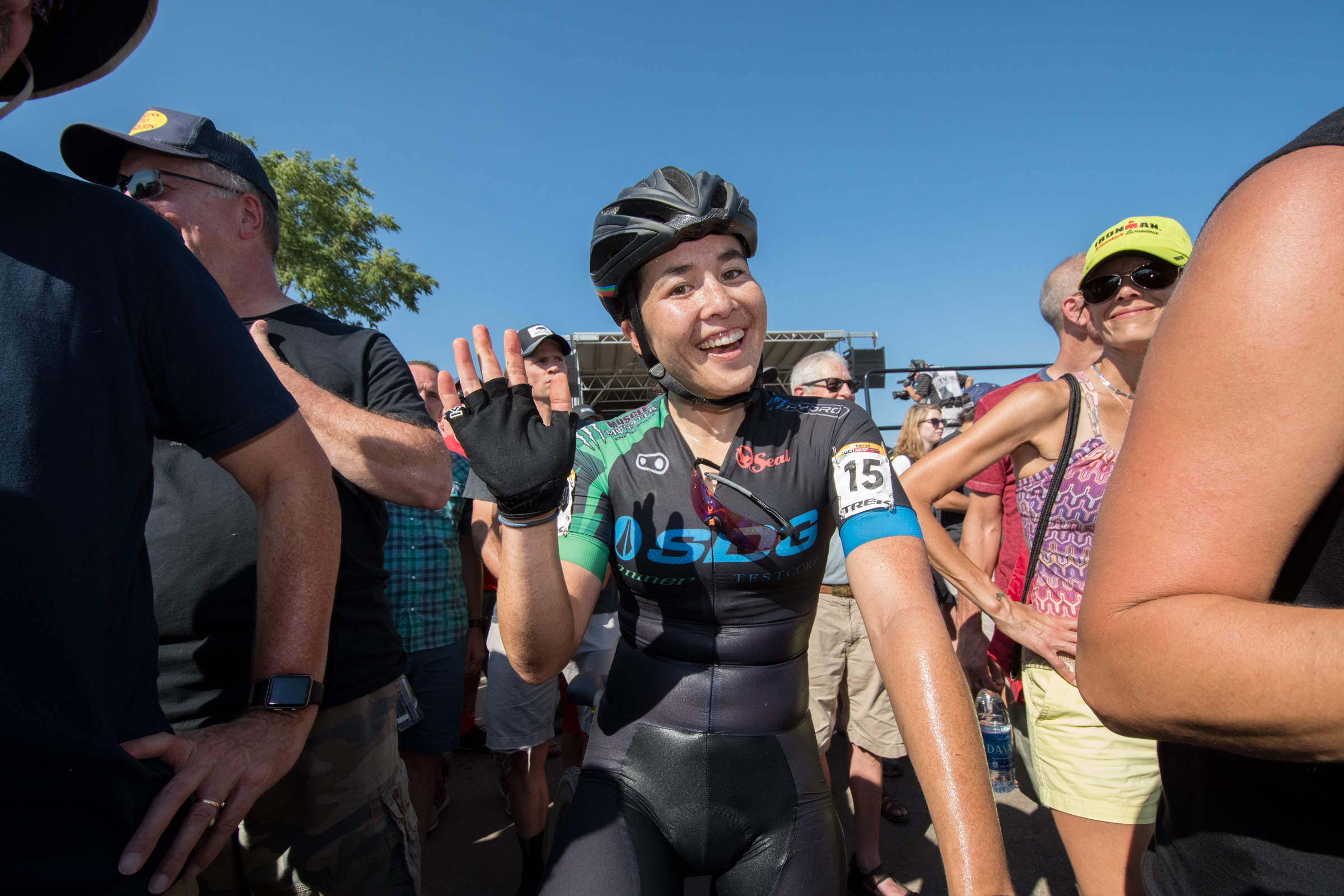 “Right now the required prize money only goes to 20th for the World Cup women. The amount that 6th-20th take home is laughable in comparison to the men, and the real issue there is that 39,500€ total prize purse for the men is completely insane compared to the 10,400€ total prize purse for the women. But one could argue that many of the women finishing in the top 20 are getting some form of monetary compensation to race their bikes. Those fighting for 21+ spots are likely paying for a lot of bike racing on their own dime and significantly benefit from an extra $300-500.

To give an example, I finished 24th in Zeven last year and would’ve made $473, had the prize money been equal. I also usually fly United back and forth to Europe which means bringing two bikes round-trip: $150 x 2 [bikes] x 2 [flights] = $600. To put the prize money towards travel fees like that makes a big difference for the privateers.” —Amanda Nauman 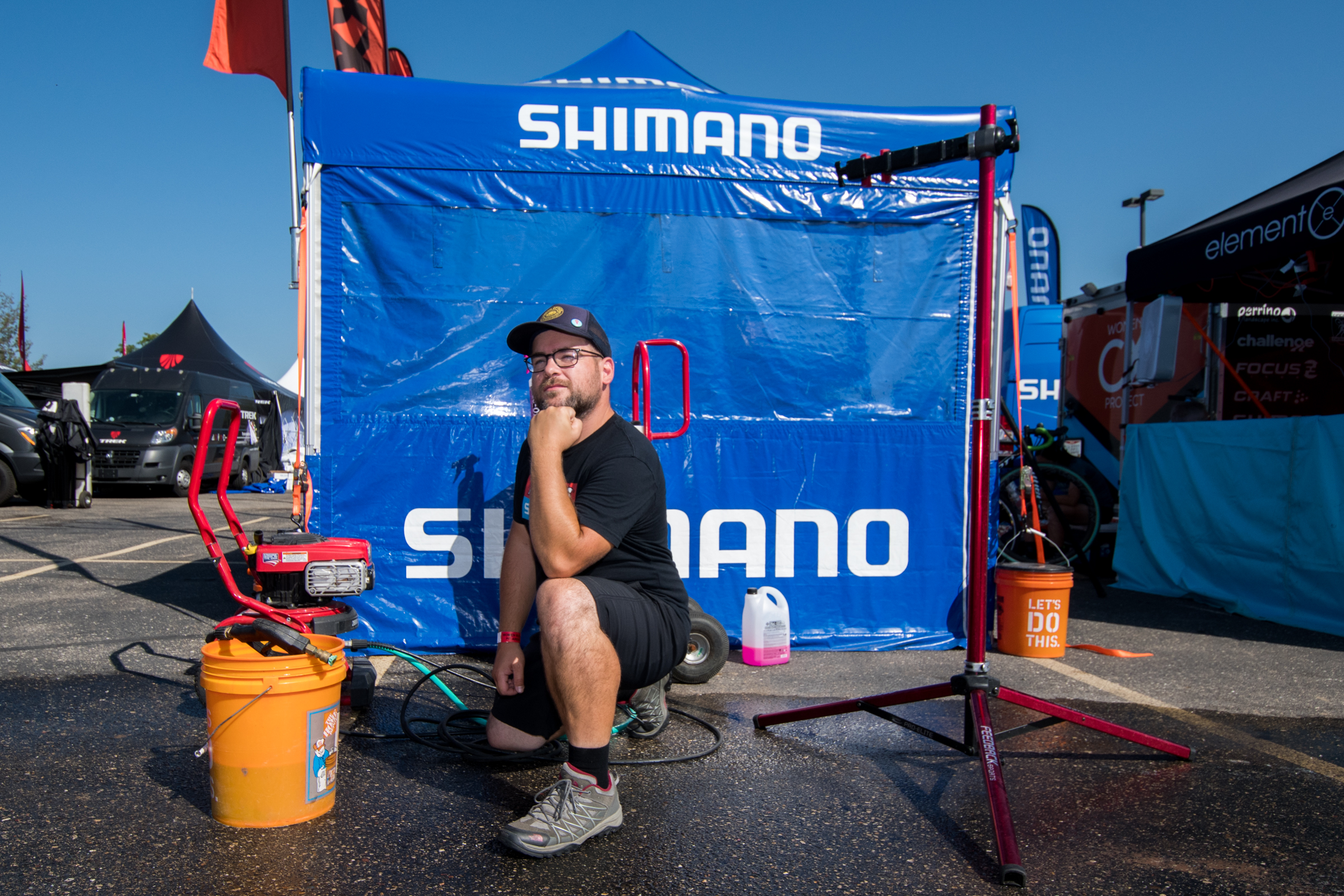 “From the bike perspective nothing changes too much … In the back of our minds we’re wondering if it’s so hot that the tubular glue is going to melt. So we keep the bikes in the shade as much as we can before the race, so they’re not sitting out in the sun baking for hours. The last thing anyone wants is a tire rolling because the glue got soft. We don’t know what the weather is coming in to here [at the time the tires are glued] so we glue the wheels the same way at the time for every condition. We glue them, not for a season because they don’t last that long, but we glue them with all conditions in mind. And then if it’s super hot or just soaking wet at a race and you think maybe the glue has been compromised then we’ll re-do everything with fresh glue, fresh tire.” —Chris Kreidl, Maxxis-Shimano team mechanic 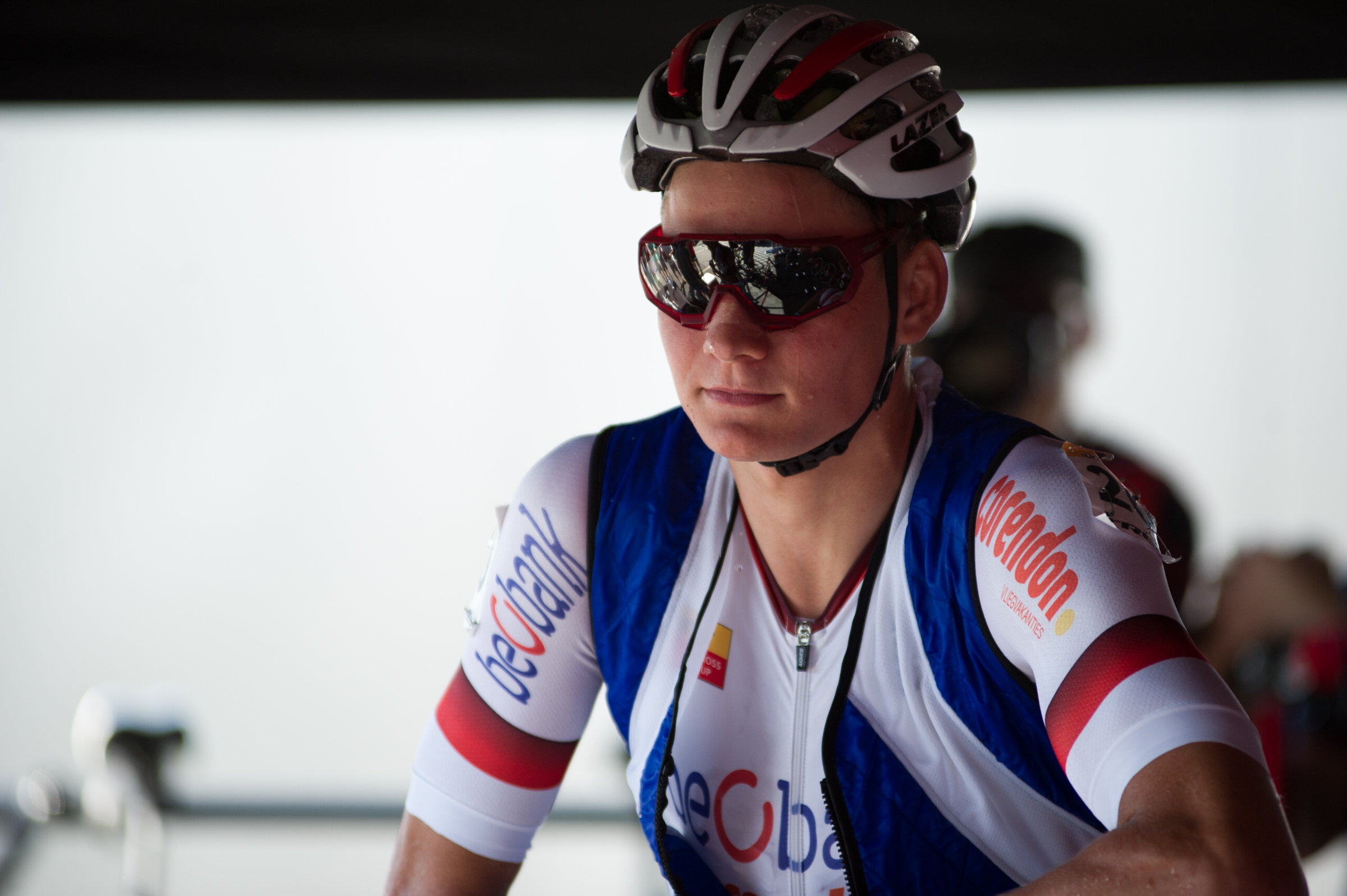 I think we made a good decision on Friday to race with the team. It was a lot hotter then. That was an advantage for today. We went with ice vests to the start. We came well-prepared and we couldn’t do anything more.” —Mathieu van der Poel in the post-race press conference 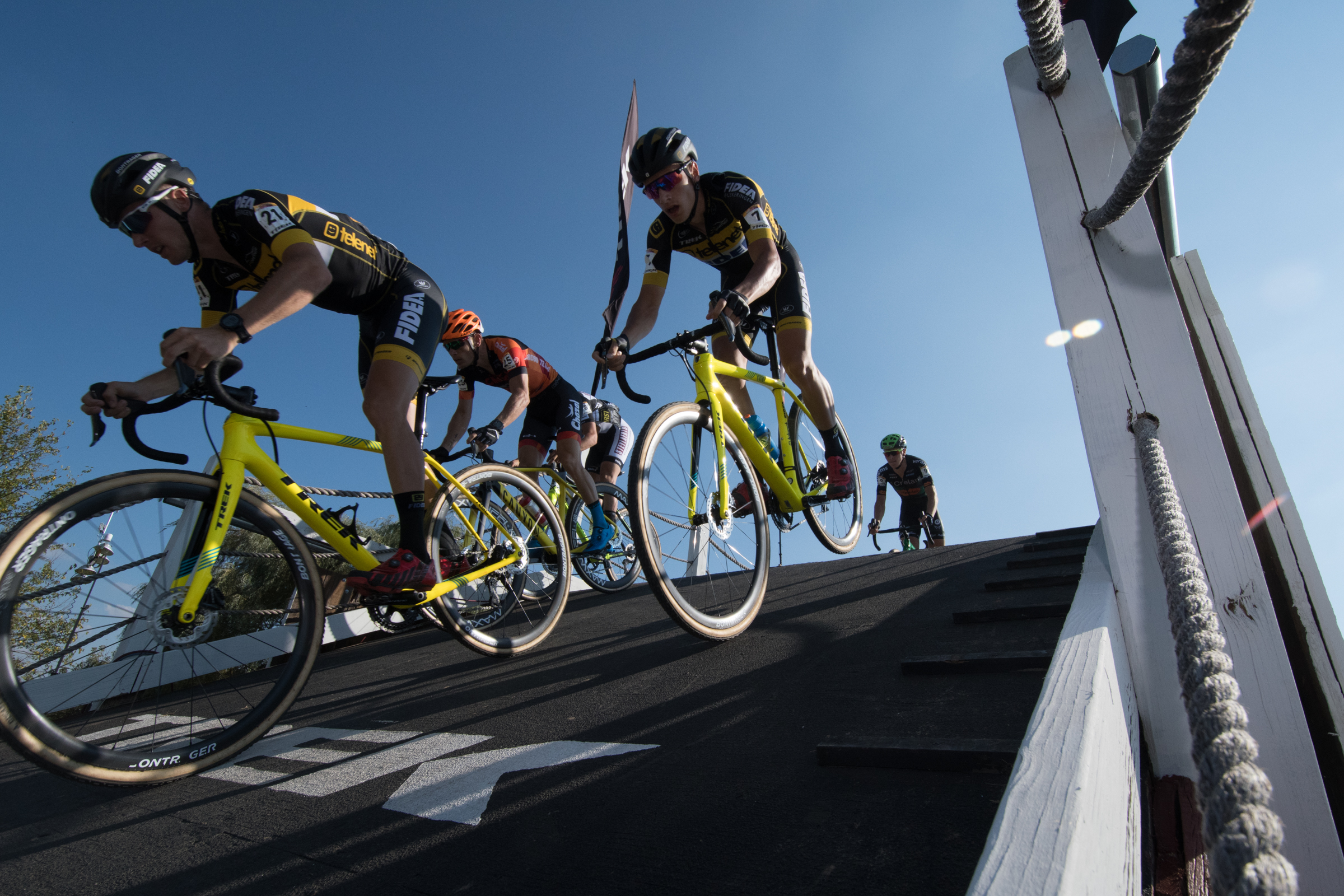 “We had a hard fight for second place. But [teammate] Daan [Soete] was really strong and we kept it together to stay in the front of the chasing group behind us. Then in the final lap we started to race for second place.” —Corne Van Kessel in the post-race press conference 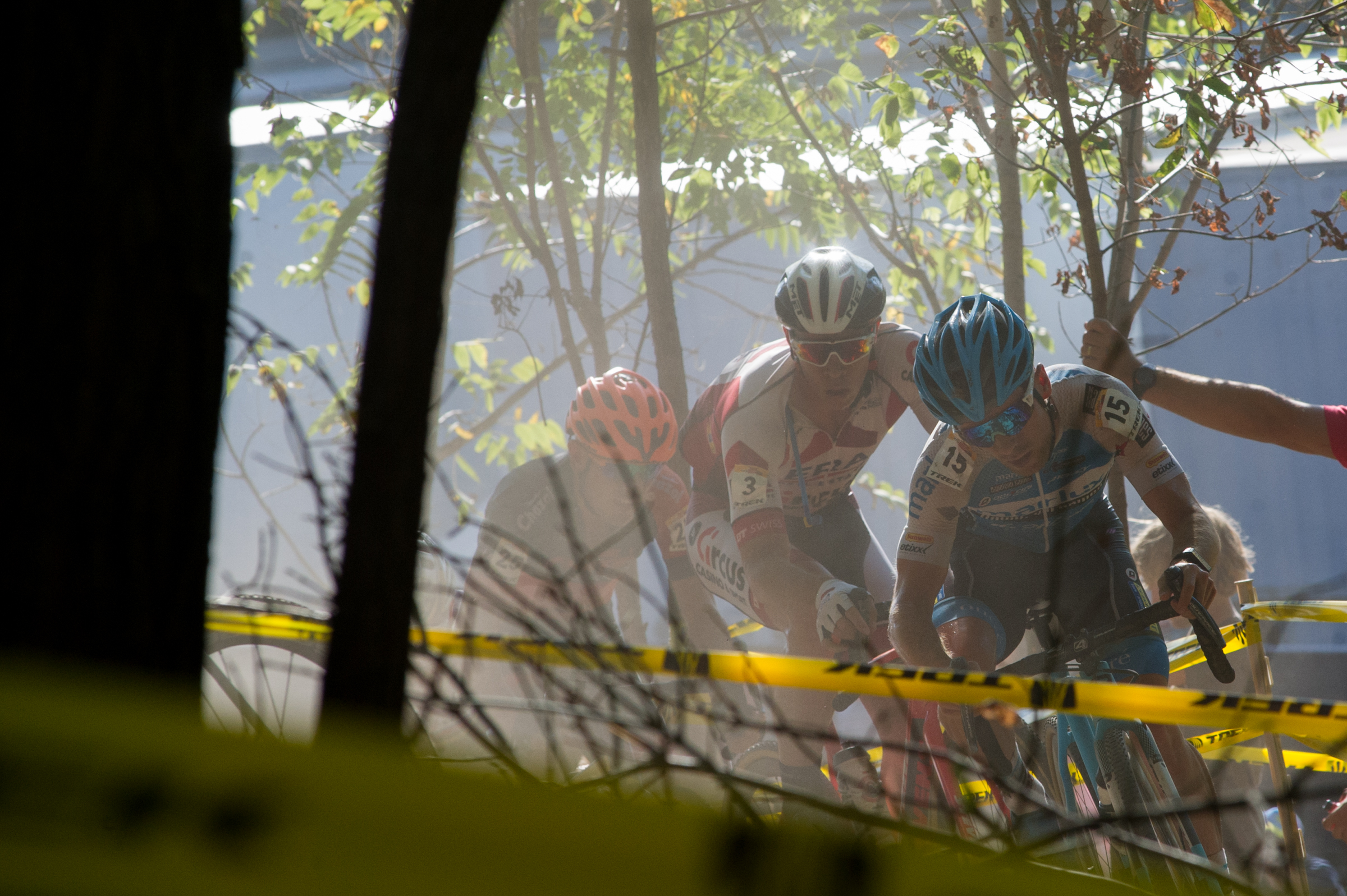 Eli Iserbyt, Laurens Sweeck and Steve Chainel climb their ways up through the dust and the trees. 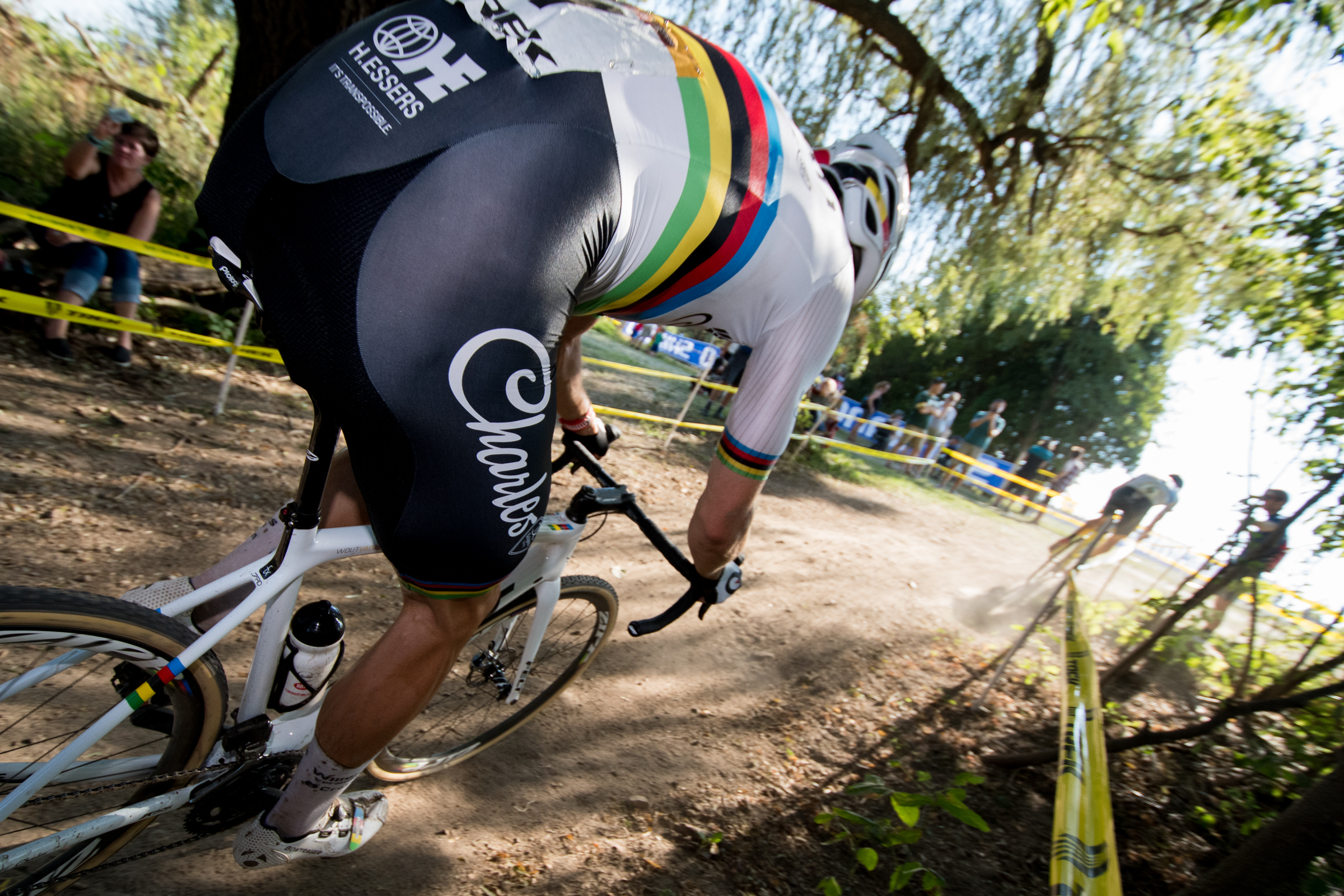 Wout van Aert chases Toon Aerts. Van Aert finished in a respectable 7th place, but it was a significant contrast from his dominant performances in the U.S. World Cups a year ago. 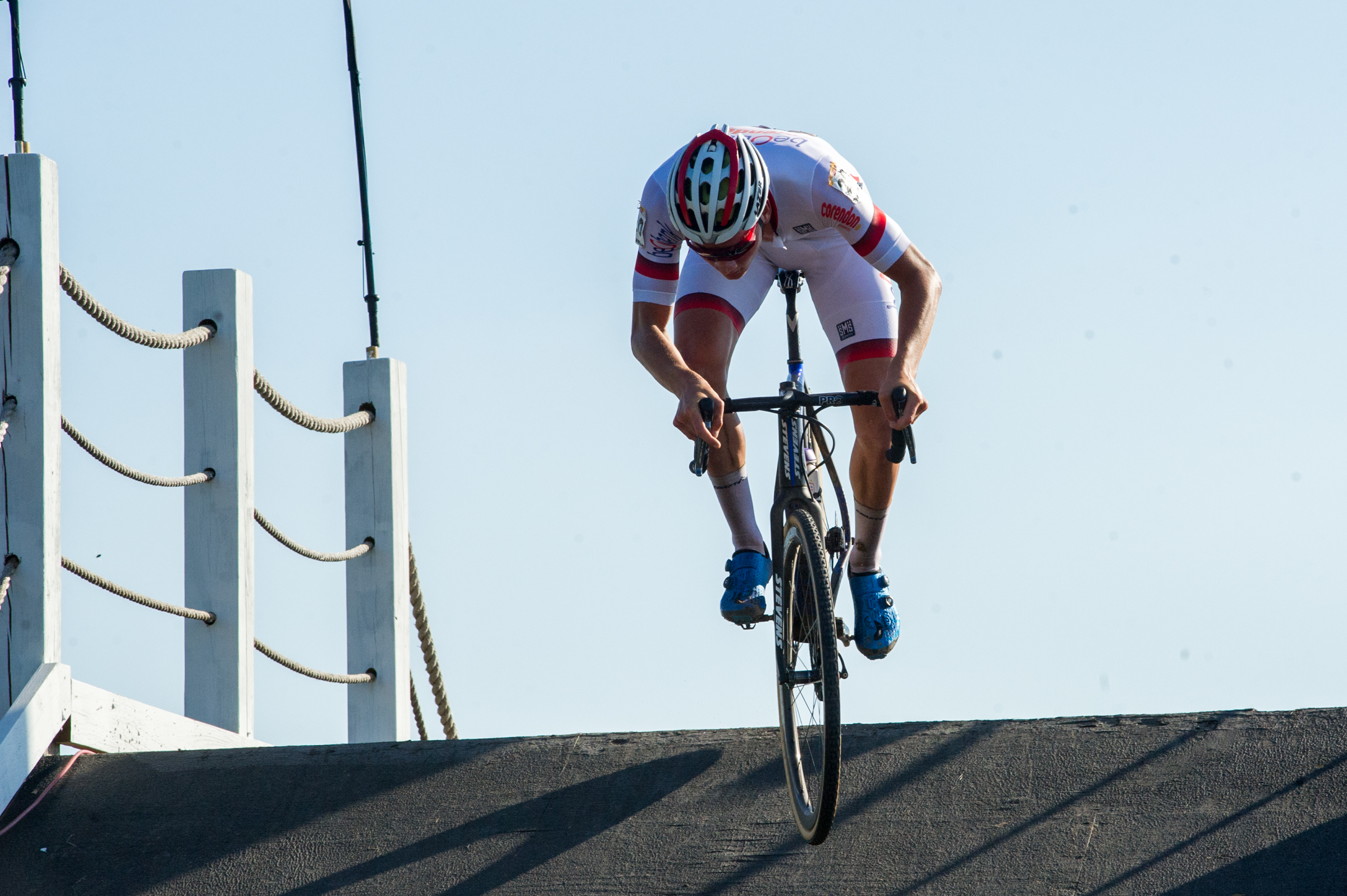 “It was not my plan [to lead the race wire-to-wire]. You can make a plan but if you mess up the start the plan is gone already … I felt right from the beginning that I had a good day … it was a very technical course and I think it was an advantage to be alone in the front and I could be a little bit more careful on the tricky descents and the corners and I could go full gas where it was possible.” —Mathieu van der Poel in the post-race press conference 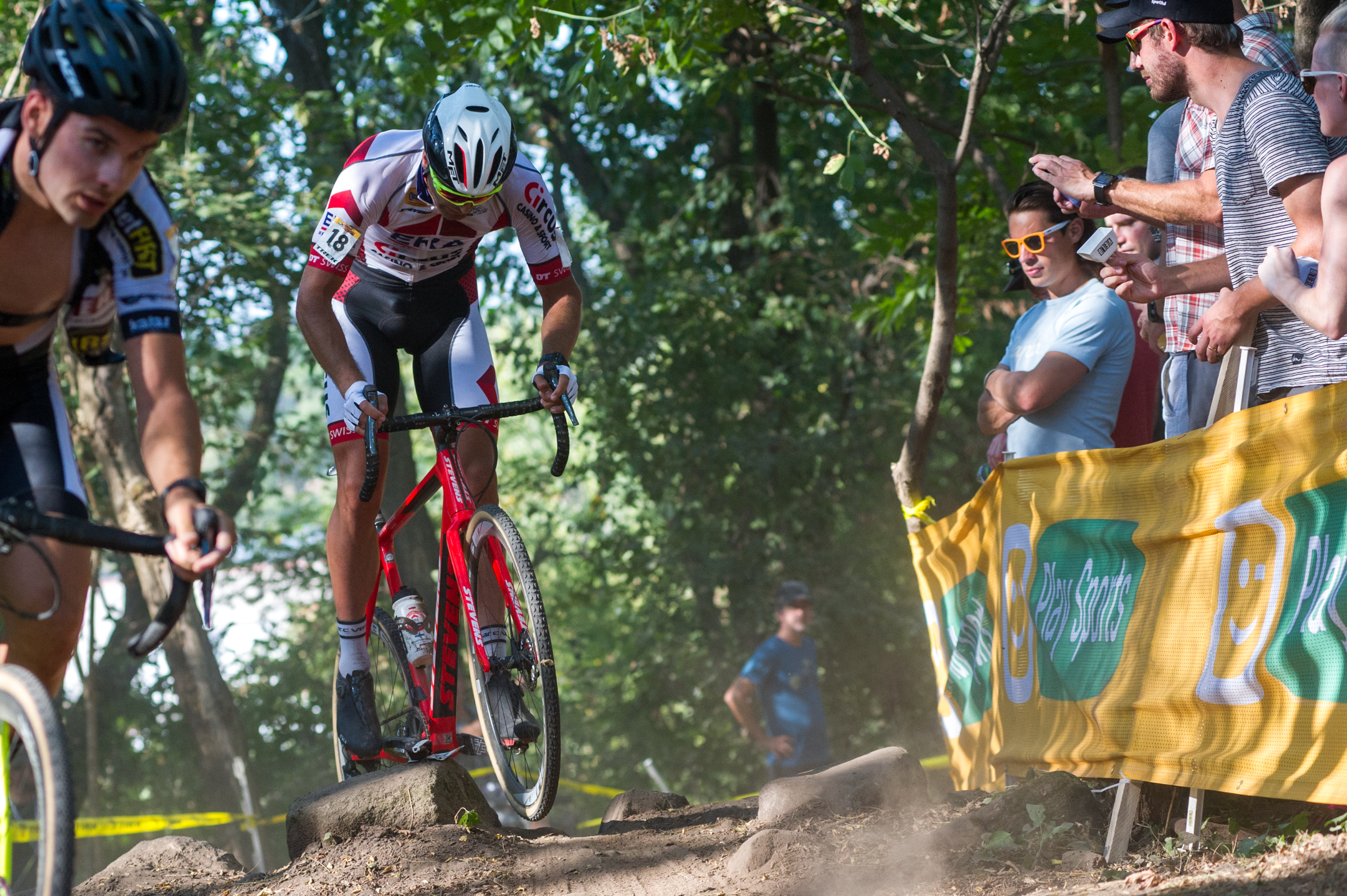 Wietse Bosmans nearly takes out the cupcake, and the cash, perched on a rock in the wooded section of the course. 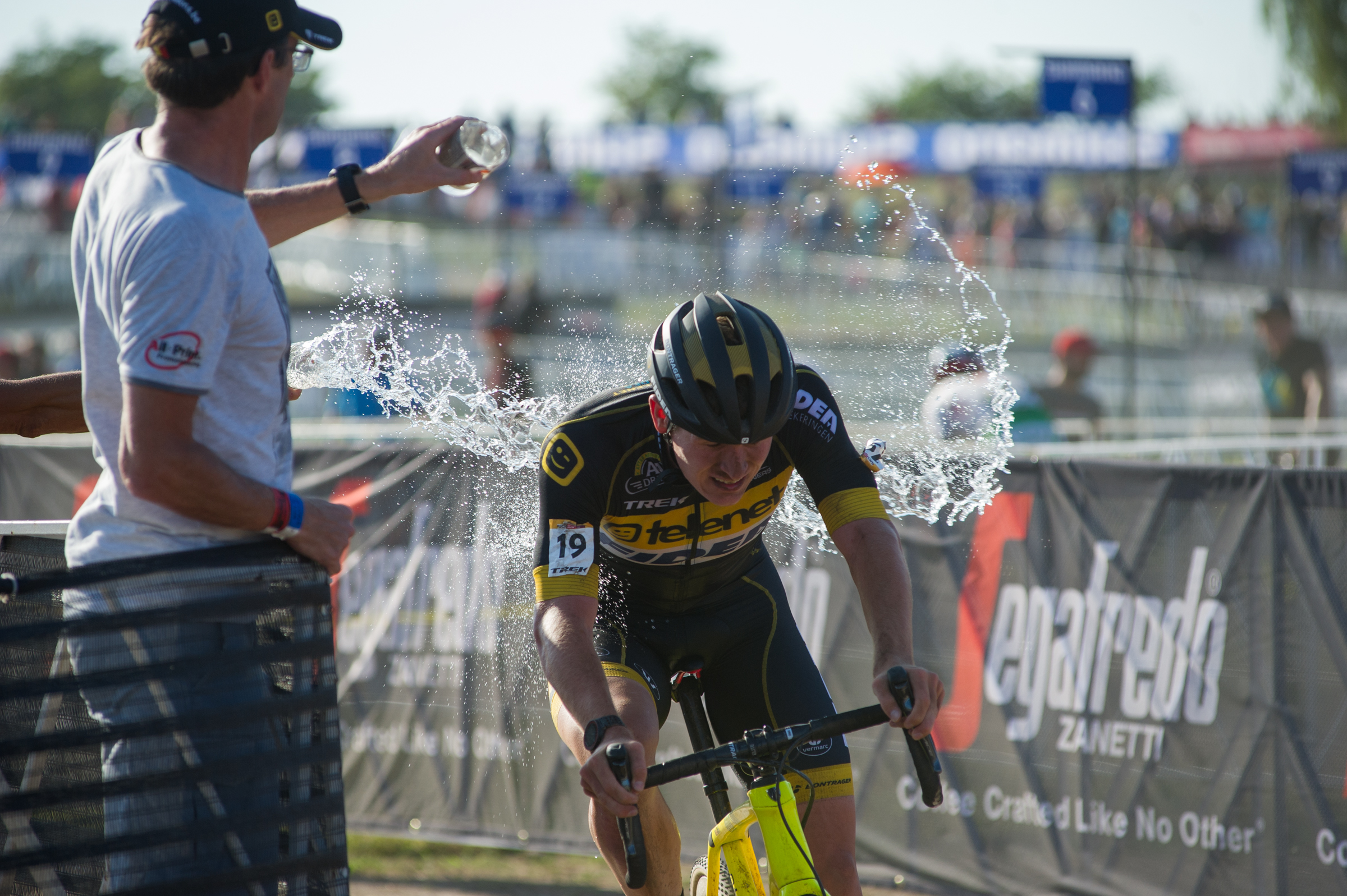 Dr. Jan Mathieu of the Telenet-Fidea team dumps water on Thijs Aerts as he rides past. The commissaires allowed the spraying of water around the course for cooling purposes during the race. 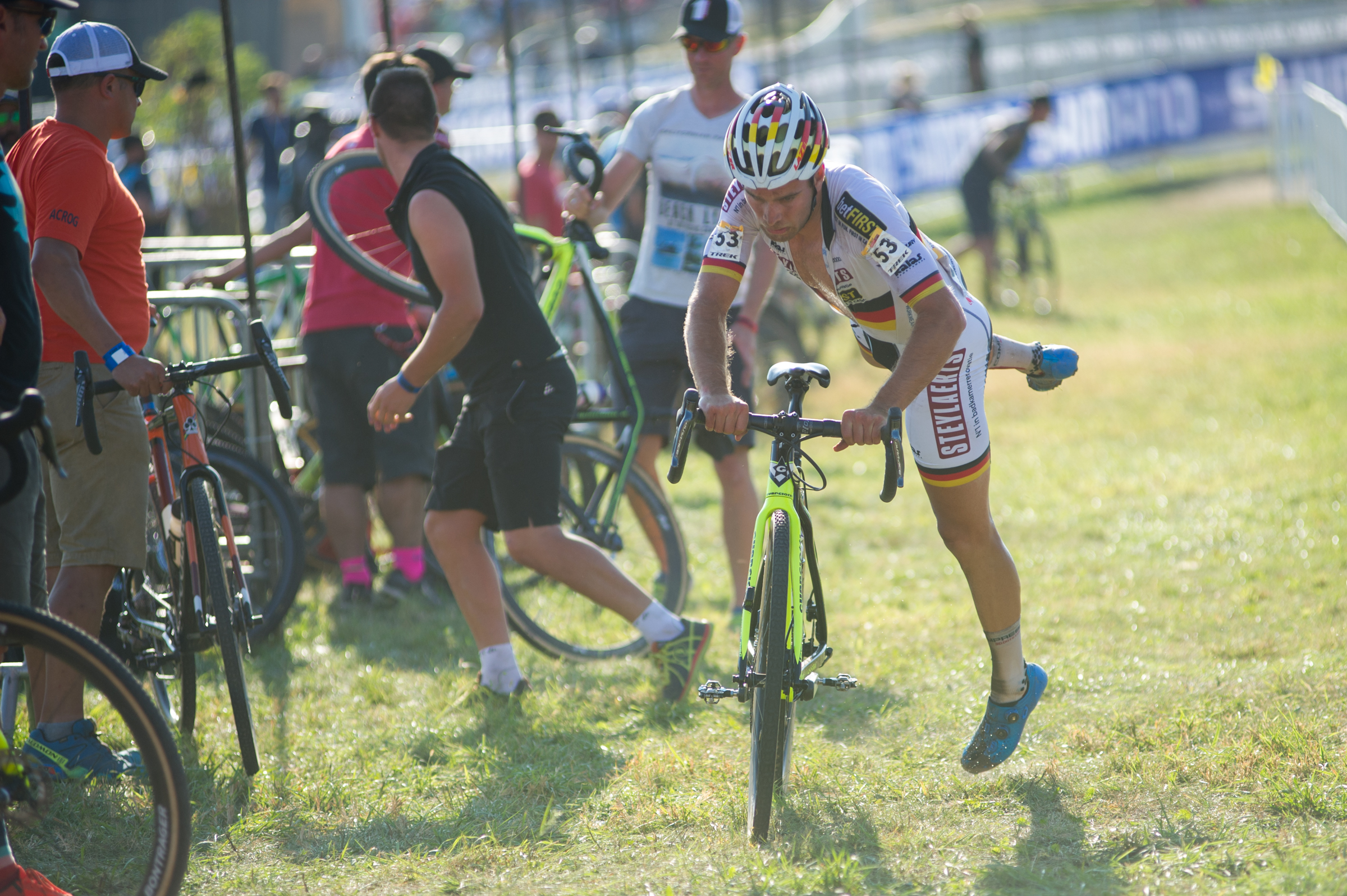 Marcel Meisen gets a bike change. Riders changed bikes during the race both for mechanical reasons and in order to be able to take a bike with a full bottle. 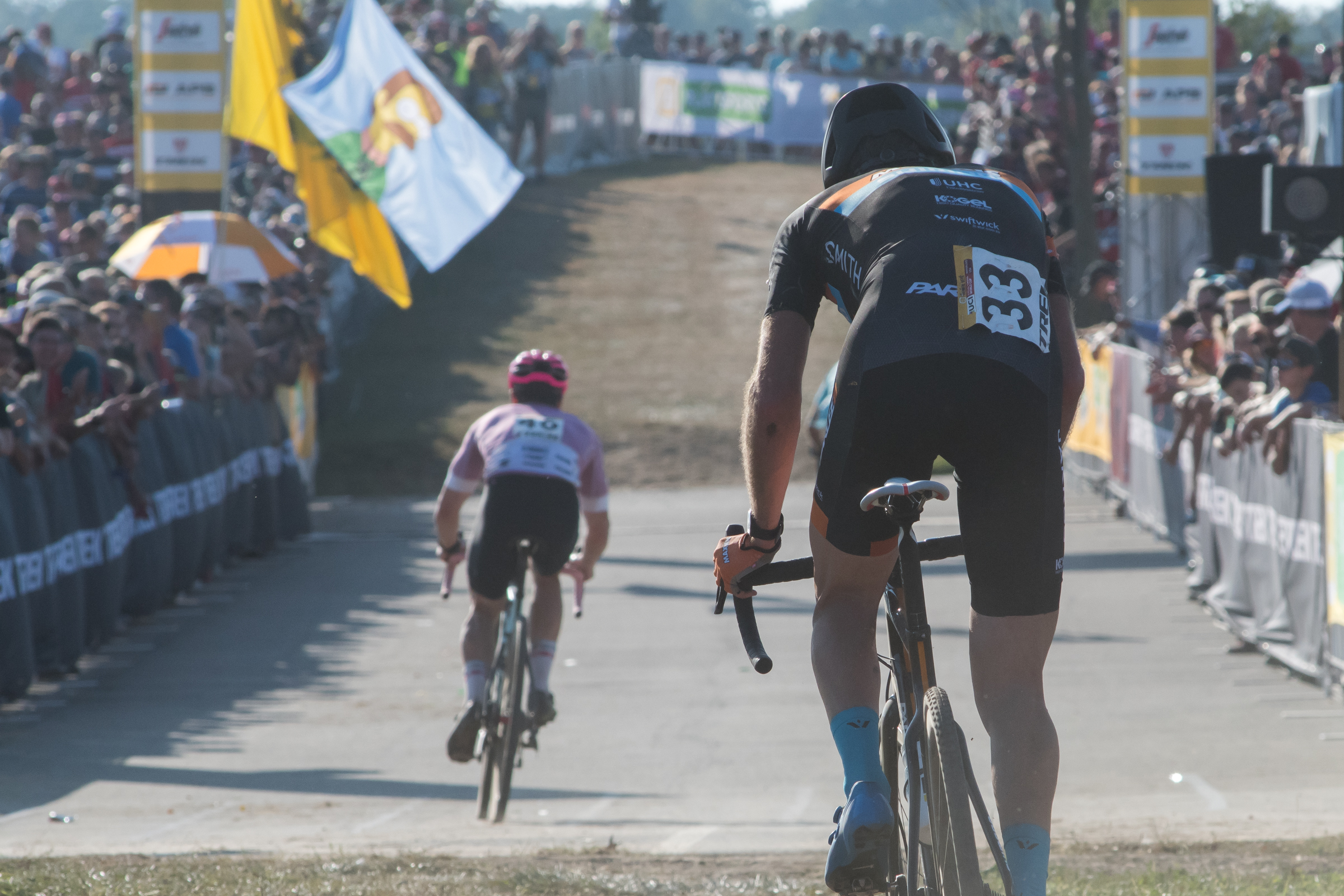 Mark McConnell and Travis Livermon ride up the finishing straight heading out on their last lap.