Sunday’s World Cup in Waterloo was probably the most challenging course for me as a photographer that I have encountered in the U.S. And really it was down to the removal of just a handful of course crossings on the west side of the course which restricted access to some of the most photogenic features. On the upside, the reversal of the men’s and women’s start times was a huge help. Normally I am scrambling during the shorter women’s race to figure out the course and get enough shots. But having the men go first gave me extra time to figure it out and also the ability to revisit spots where I didn’t get what I needed the first time. The gallery below is from both races: 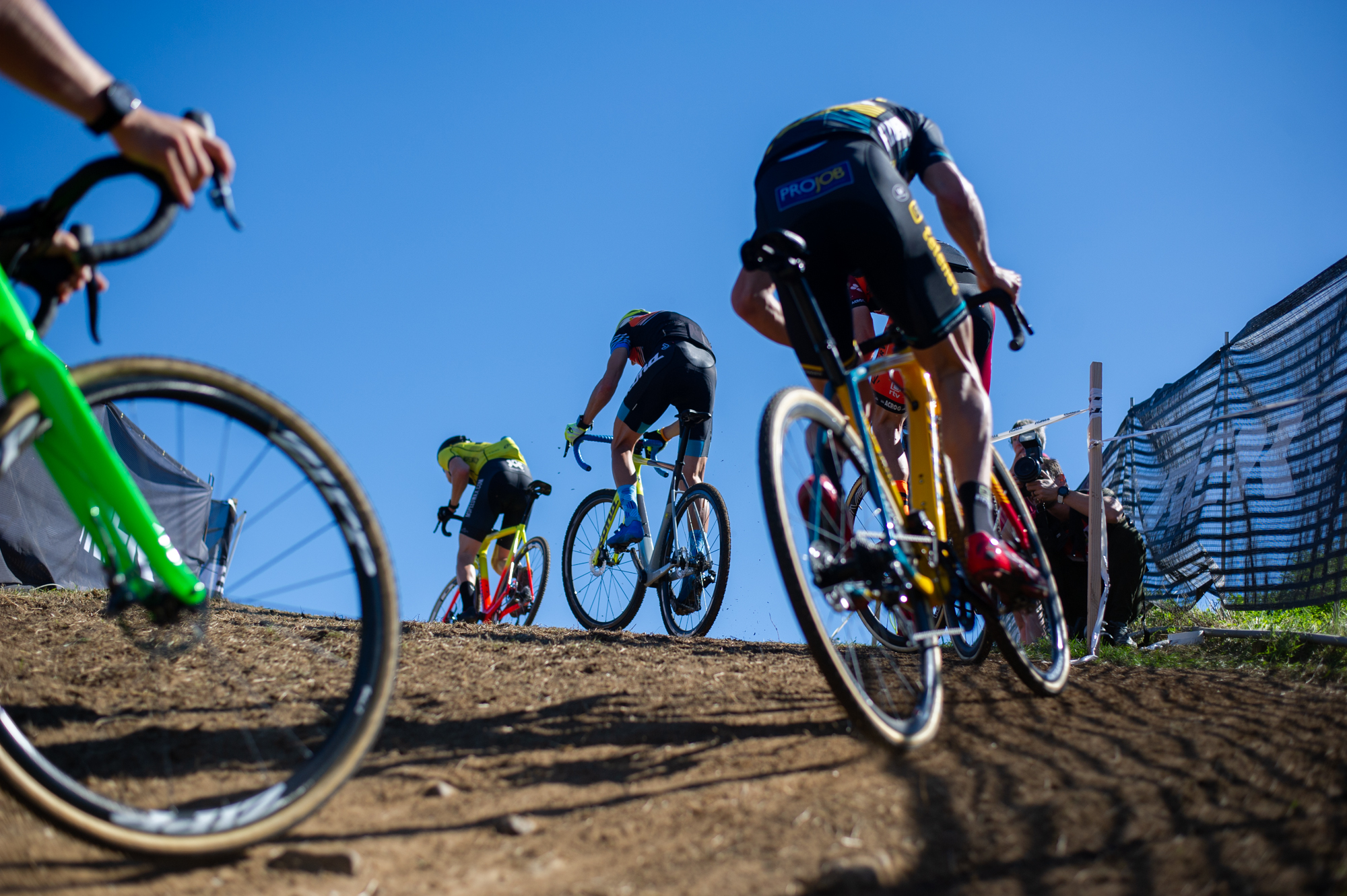 Training, Factory Hill. I normally use the training, or pre-ride or whatever you want to call it to get specific shots of particular riders that I may not be able to get enough of during the race. But on Sunday in Waterloo I got those shots on Factory Hill and then spent the rest of the time trying to figure out how I was going to get around the course during the race. 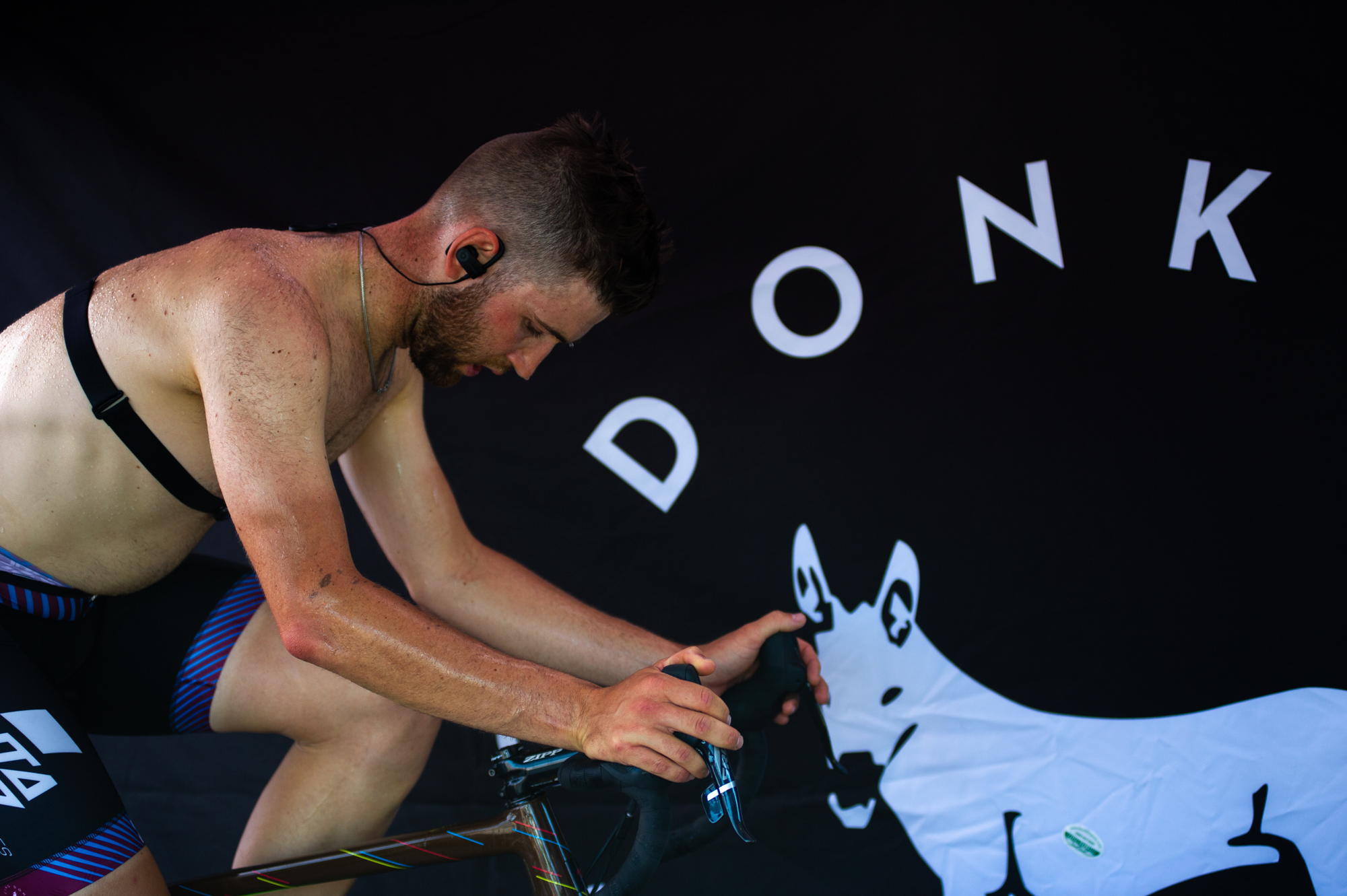 Tobin Ortenblad warms up. Just before the race I made one last pass through the teams area to grab some pre-race color. Ortenblad caught my eye because he looked dead serious and super focused as he rode his rollers. 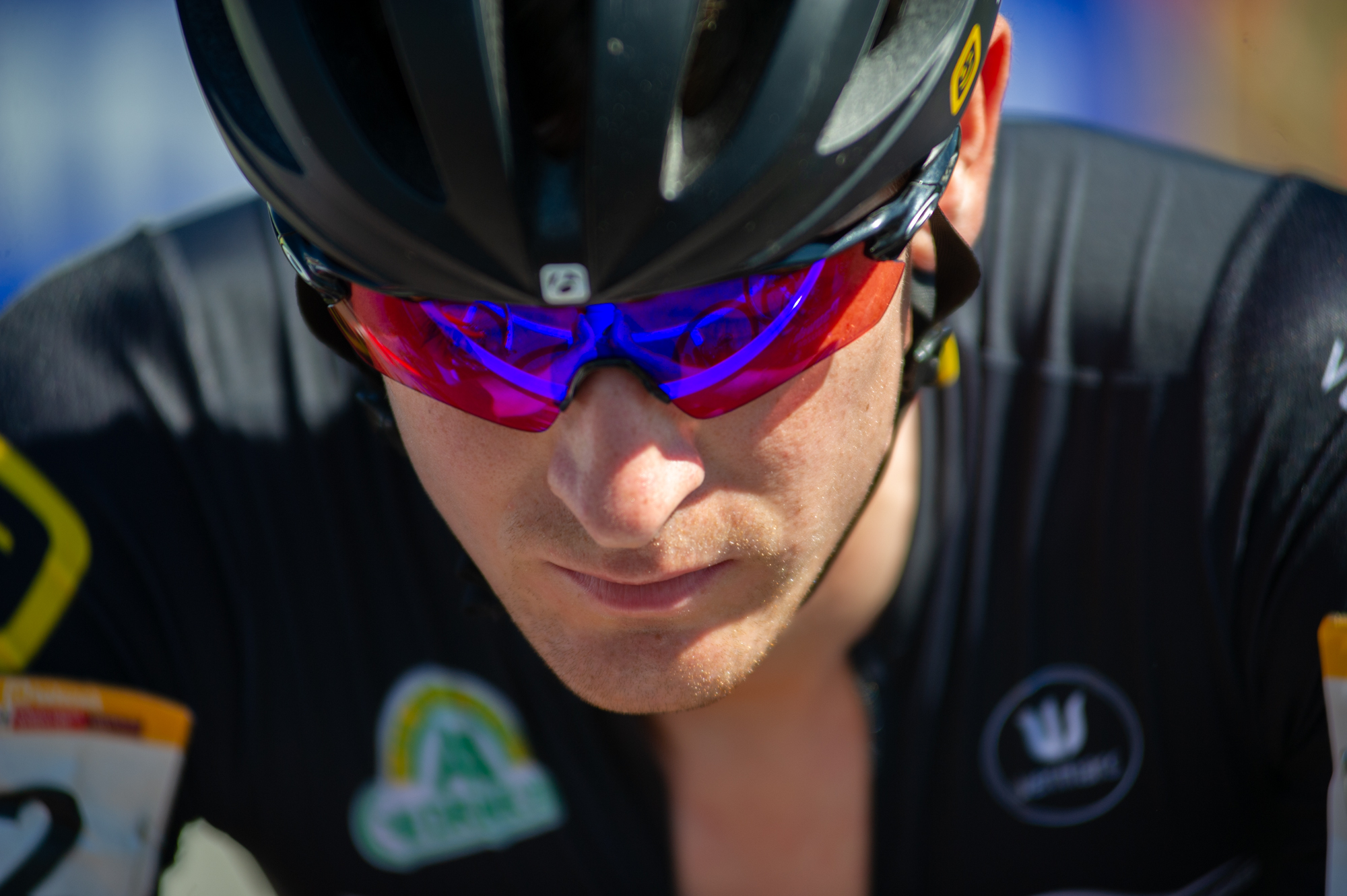 Toon Aerts on the start line. Next I headed to the start grid to get a few quick shots of the riders on the line. Toon Aerts was one who caught my eye. He looked very much “in the zone” Also, he was right in front of me. 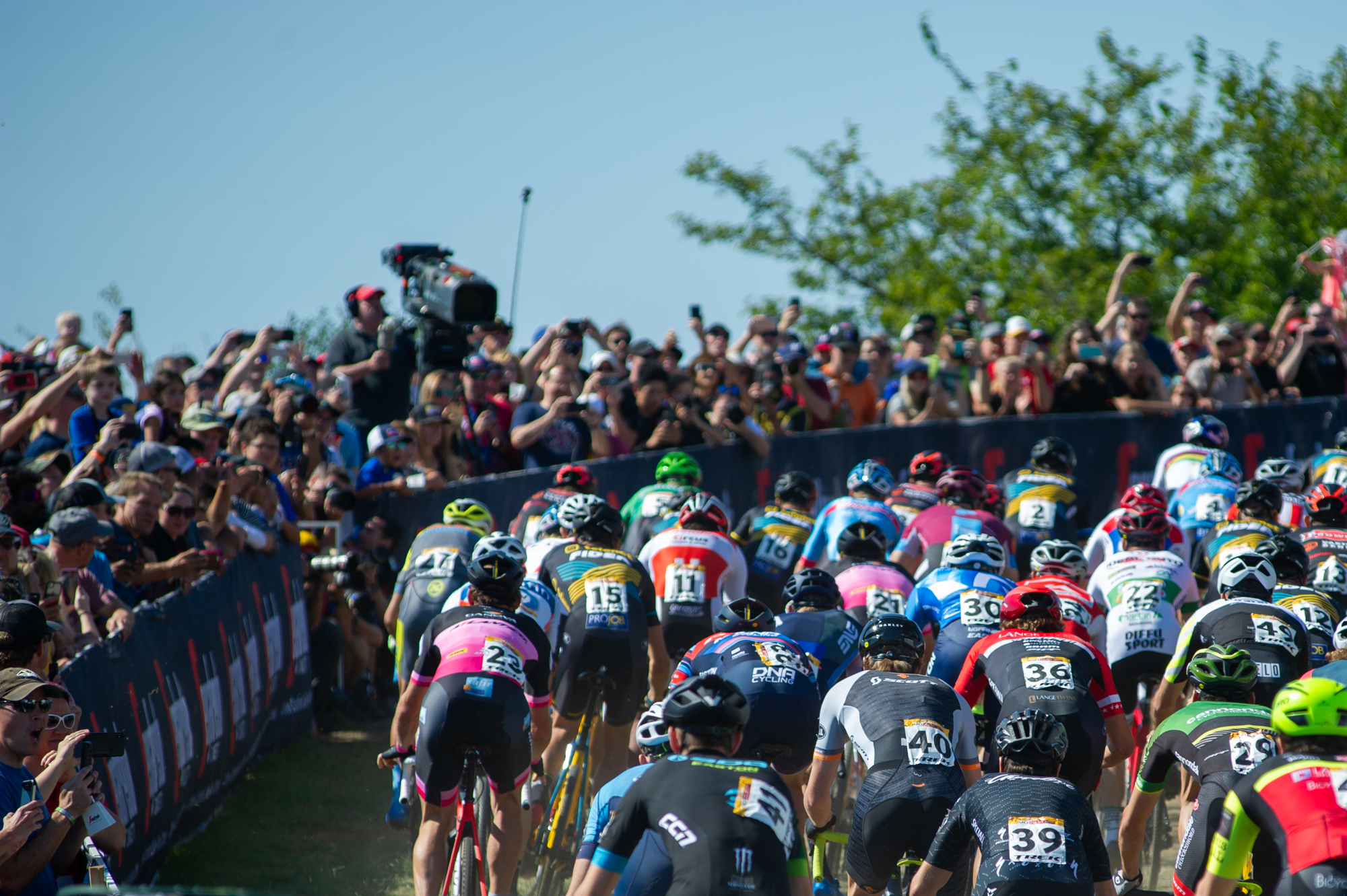 The “hole shot.” I intended to to shoot the hole shot past the first bend but as I was running up the side of the course I saw this view and decided to stop and shoot it from behind. I don’t regret it but it did cost me when I arrived at the next spot I was planning to shoot. 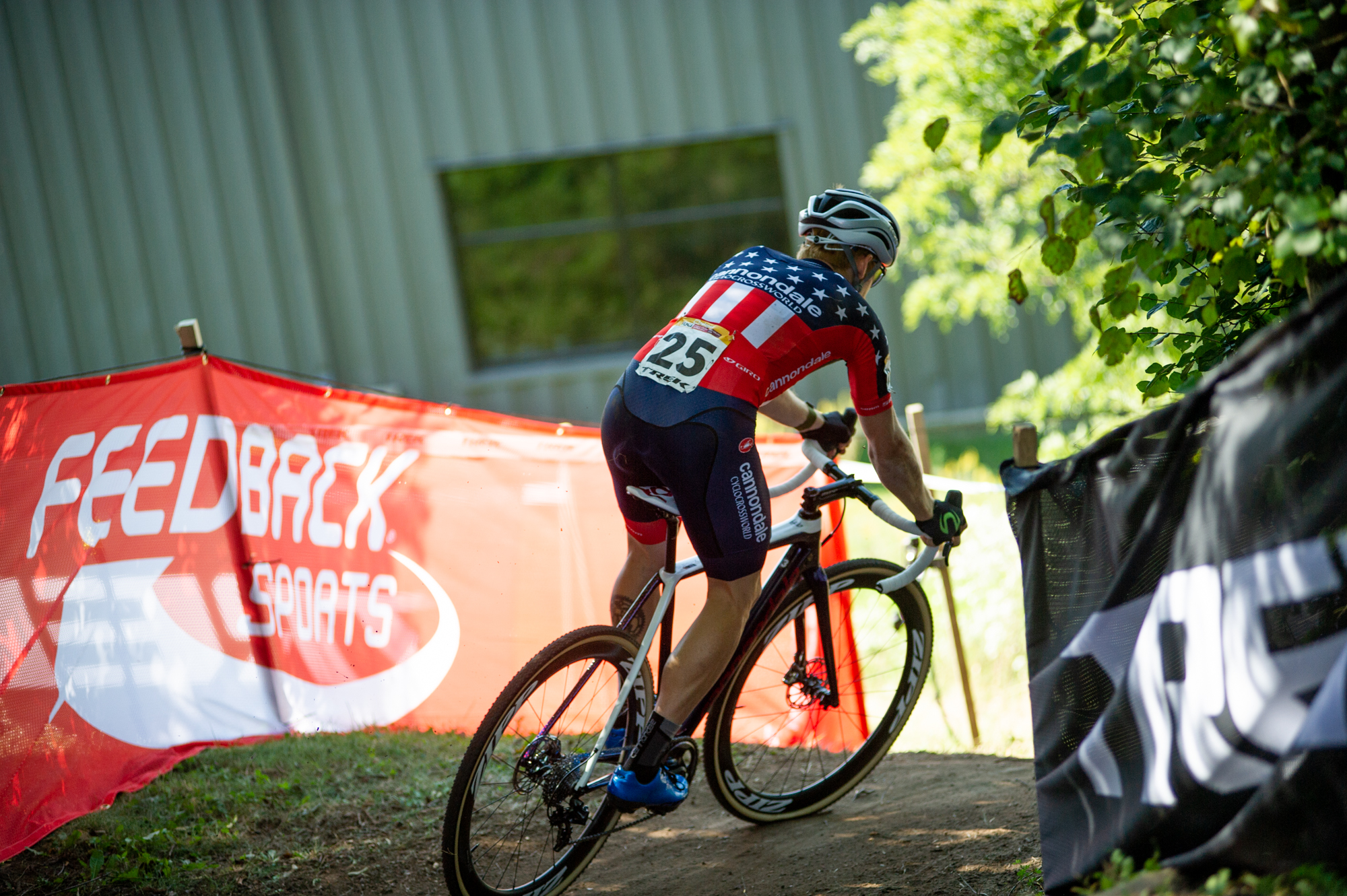 Hyde off the back. I wanted to shoot in this spot from the bottom of the drop to get some shots of the riders silhouetted against the sky before they drop in. But by the time I arrived the leaders were already through. I was surprised to see Hyde and Lars van der Har off the back of the pack here, only a third of the way into the first lap. 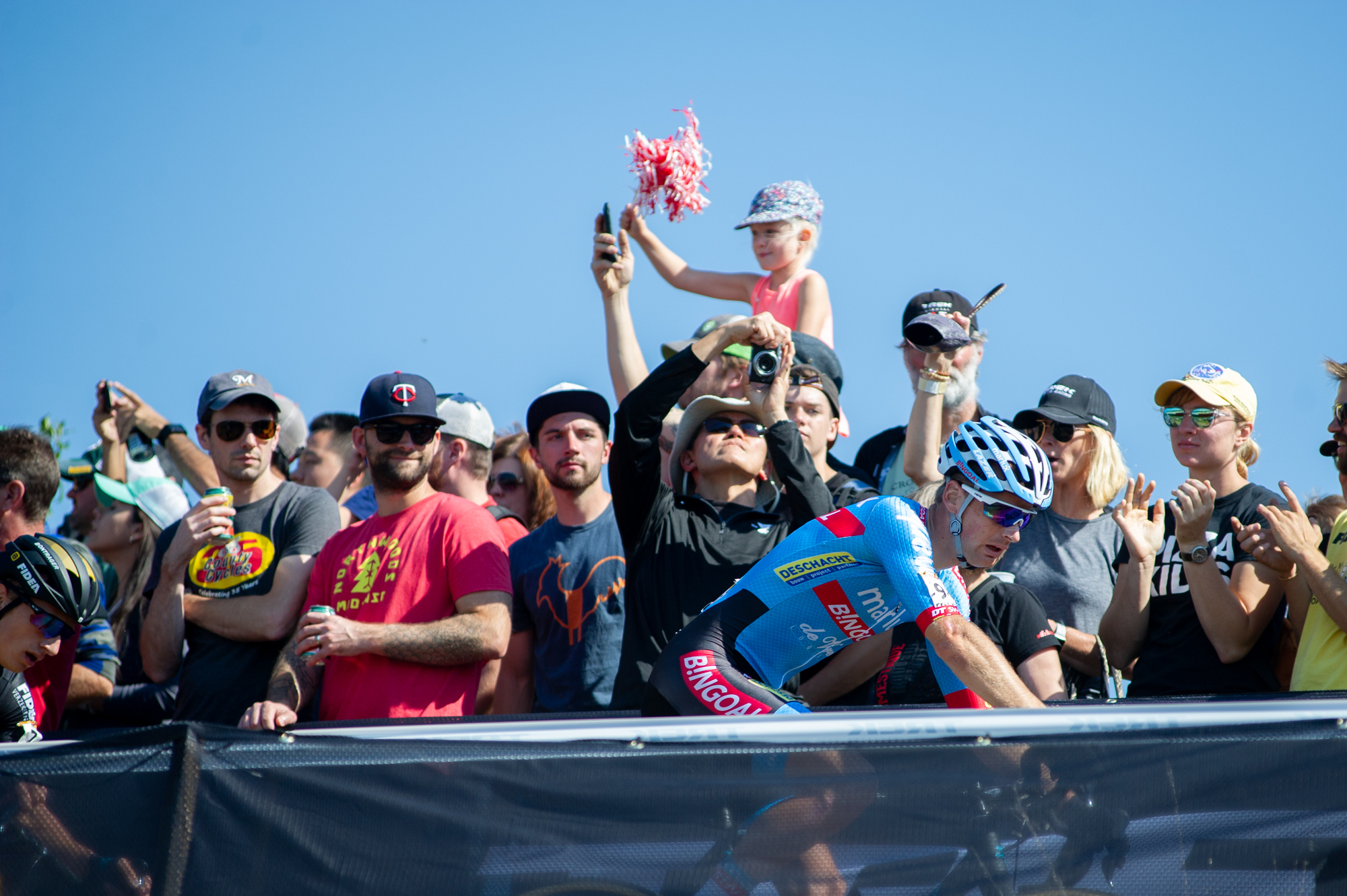 Kevin Pauwels entering the Factory Hill section. I was right next to Factory Hill, which is almost at the end of the lap, so I decided to head there next and catch my breath. I took up a spot at the bottom where I could shoot the riders as they entered the section at the top of the hill and then also get shots from below as they rode up the steep ramp out. 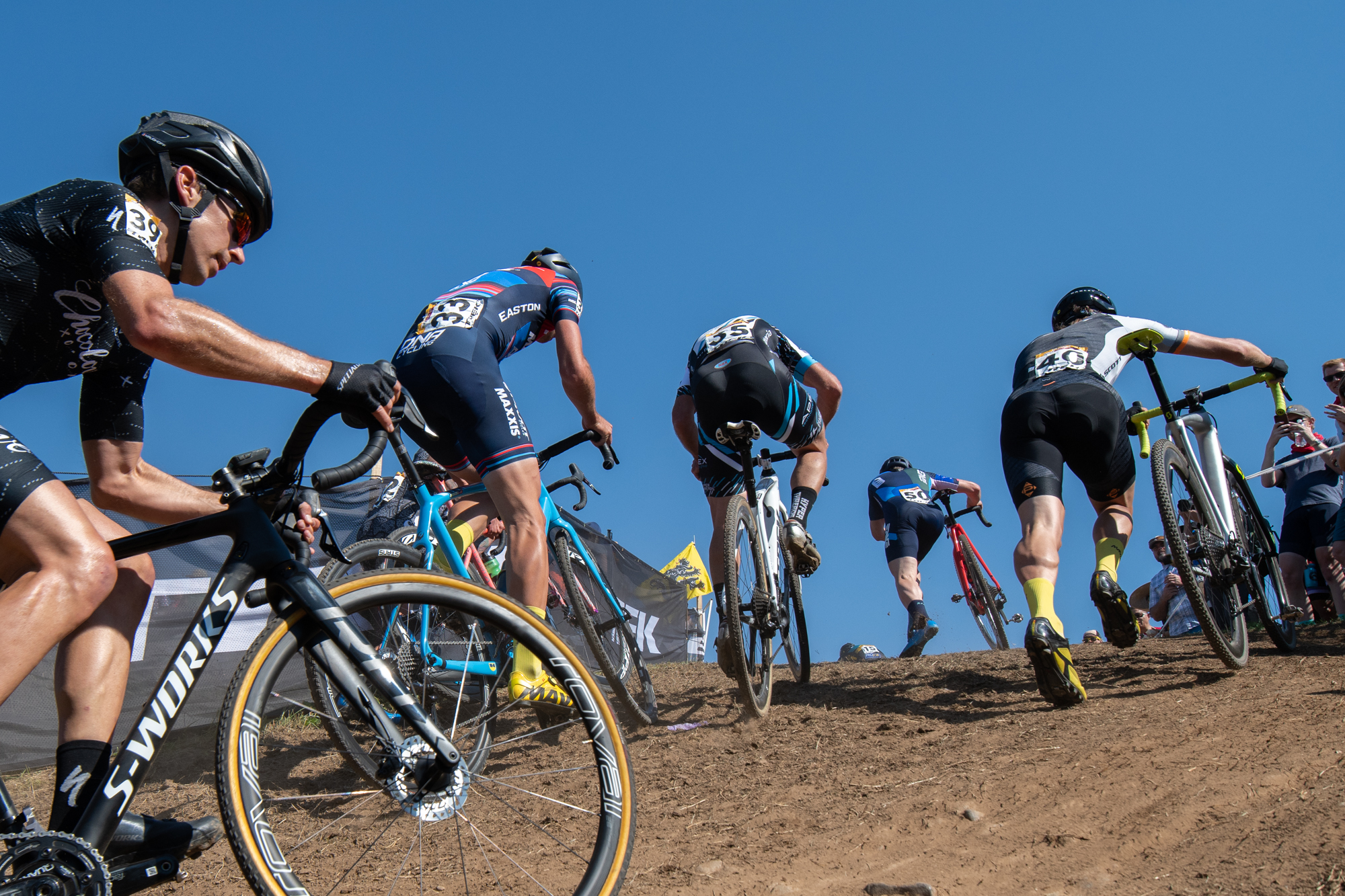 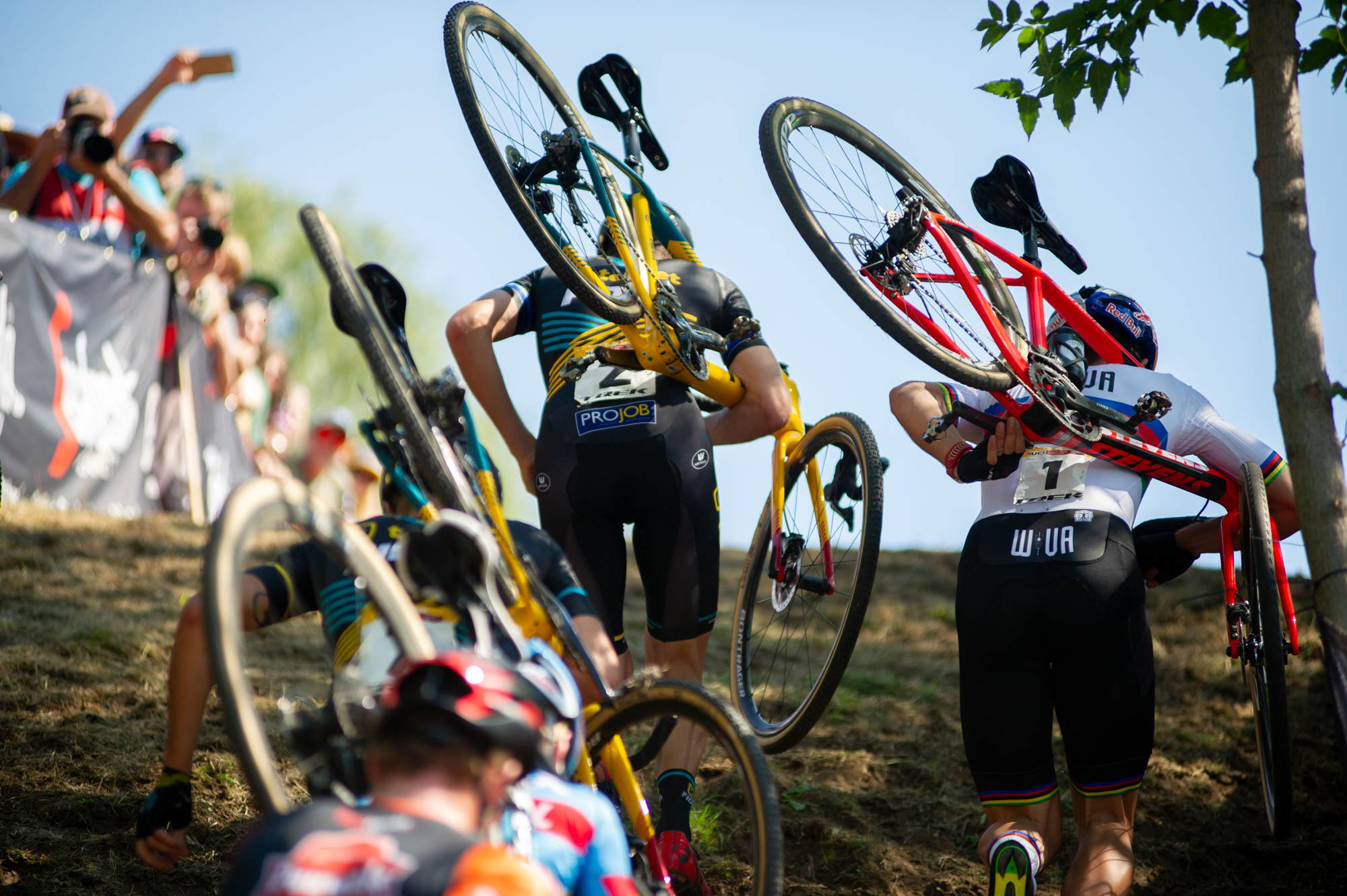 Lap two. Toon Aerts and Wout lead the race up the steep run-up. God bless Trek for including this feature. I rarely get to see all the riders shouldering their bikes on a U.S. course. My original plan would have gotten me to this spot on the first lap when everyone was still bunched up. I’ll have to wait for Mt. Krumpit to get that shot. 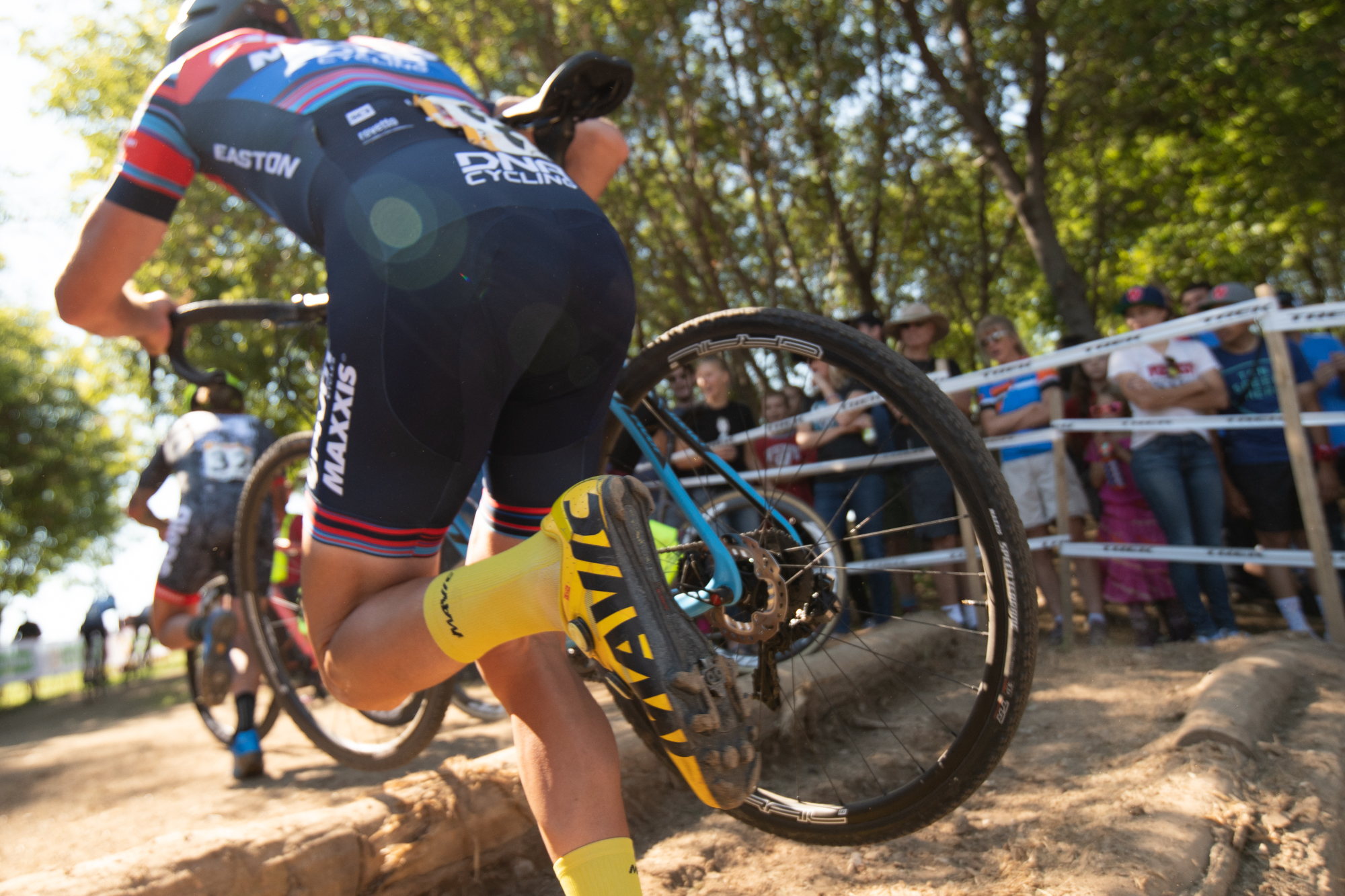 Jamey Driscoll on the log steps. I made another mistake after shooting the run-up. I went to the top of the steep off-camber drop and shot a few forgettable photos. I should have gone to the bottom or middle. I would have caught more riders and the angle would have been much better. Next I headed to the log steps where I had to wait nearly a full lap for the riders. Jamey Driscoll’s footwear game is A+, BTW. 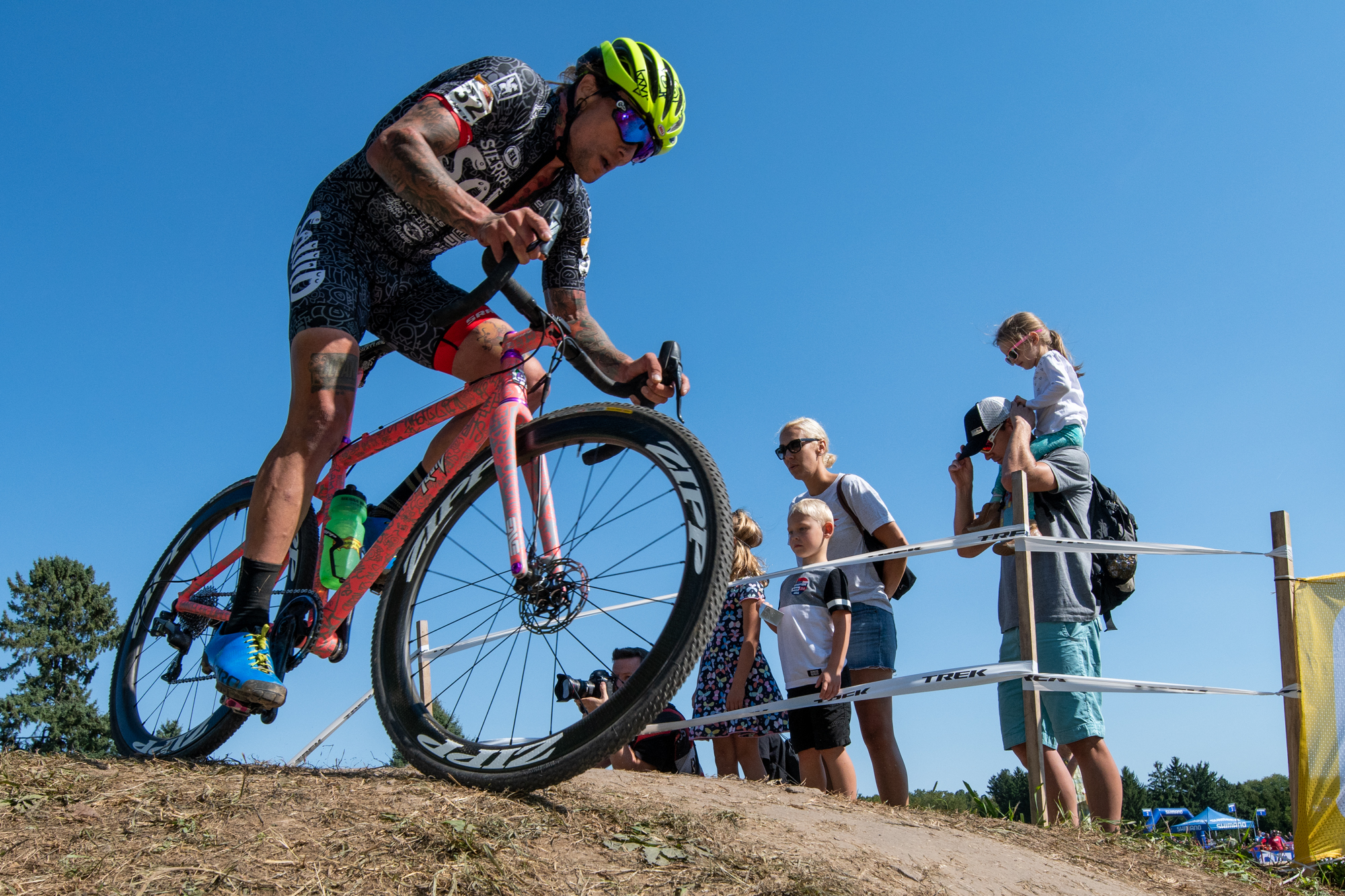 Anthony Clark rolls over the tabletop. People were having fun on this feature in the open course sessions but it was all business in the race. I got a low angle hoping someone out of contention would play to the crowd and launch it, but no dice. 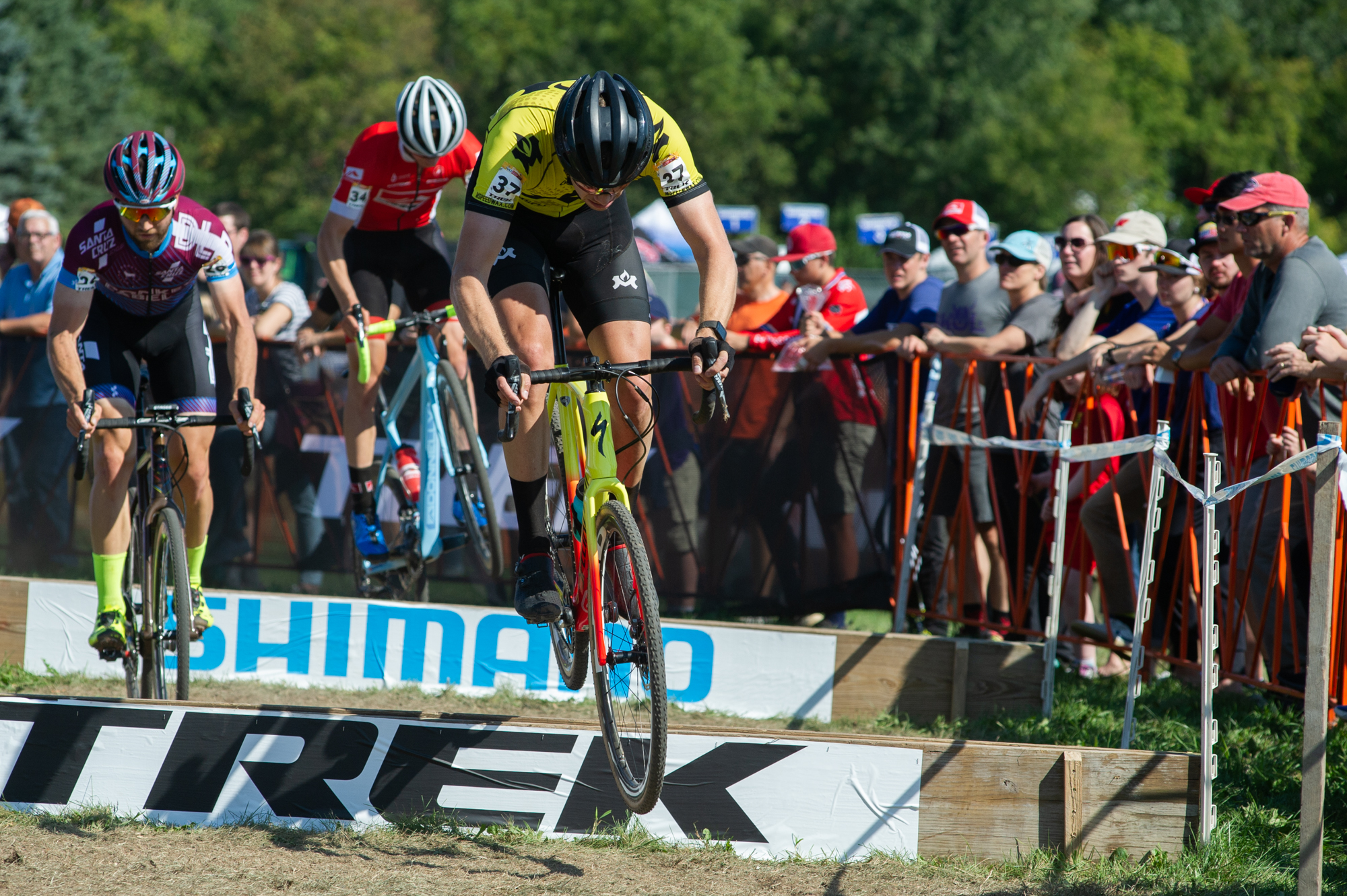 Eric Thompson leads Tobin Ortenblad and Lance Haidet through the barriers. These barriers were deceptive. They were relatively low and far apart, and the course was wide which should make for easy riding. But the ground was soft making it tough to carry momentum. By Sunday the ground had hardened up a bit and most riders were riding but I still saw (and heard based on crowd reaction) lots of riders having trouble through here. 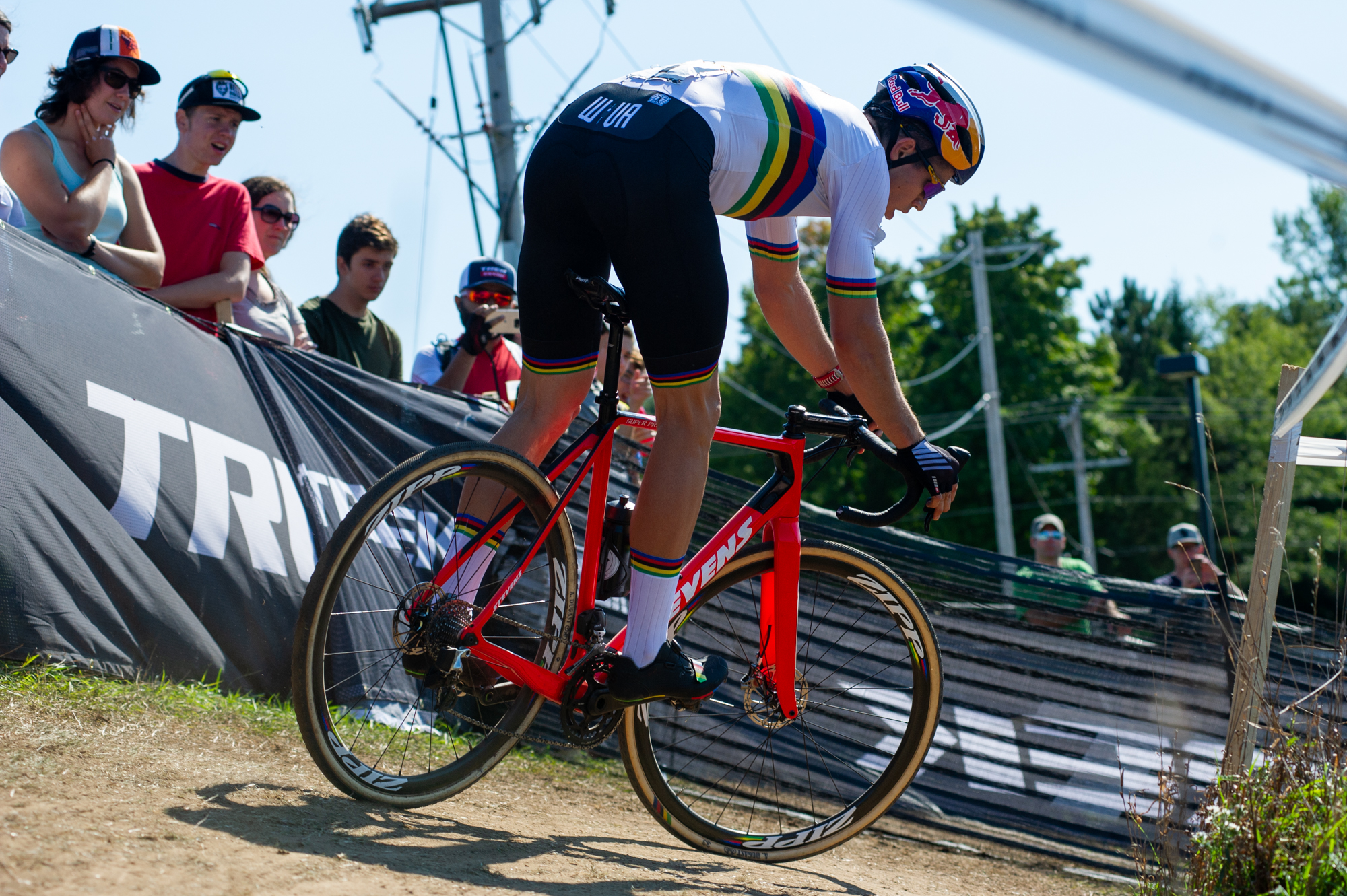 Wout dropping into the Factory Hill section. This was at three to go or so and by this point in the race I was pretty relaxed. The men’s race is generally far less stressful for me. Even though I had botched my plan for the opening laps I was still able to go back to spots where I had shot earlier and try different angles. 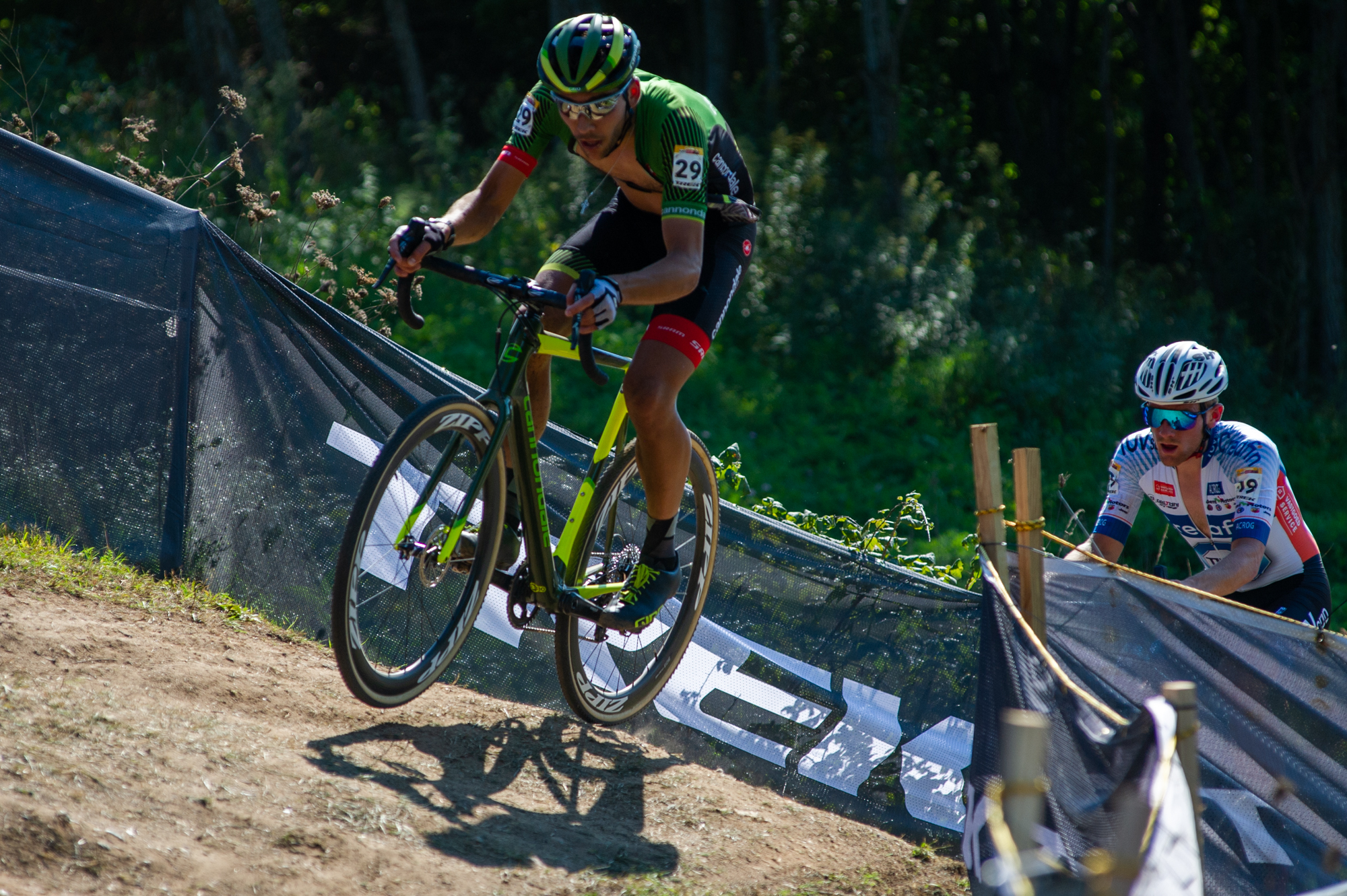 Curtis White and Sieben Wouters. This was a spot I noticed while I was running between features in the opening laps. If I could do it again I would cross the course and shoot more head on and from a higher angle. Next year. By now my plan was coming together for the women’s race and it was time to shoot the finish. 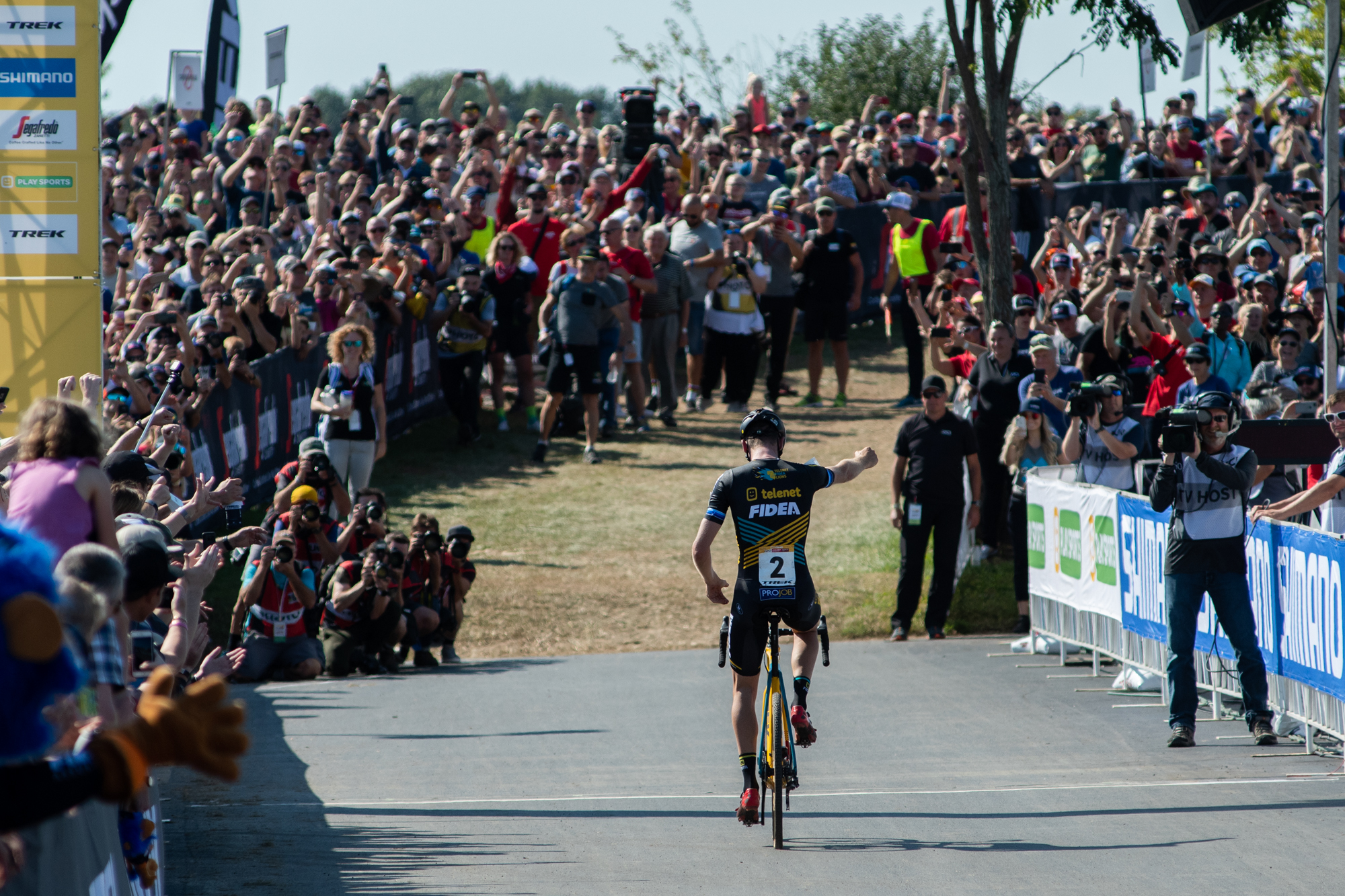 Number two in your program; number one across the line. Toon Aerts wins. Last year I was the only photographer shooting the finish from this angle and a commissaire told me to move because the TV people radioded to say I was in the finish shot. This year there were at least six of us there and it was apparently fine. Also, I did get a shot of the tail whip but it’s not very good. 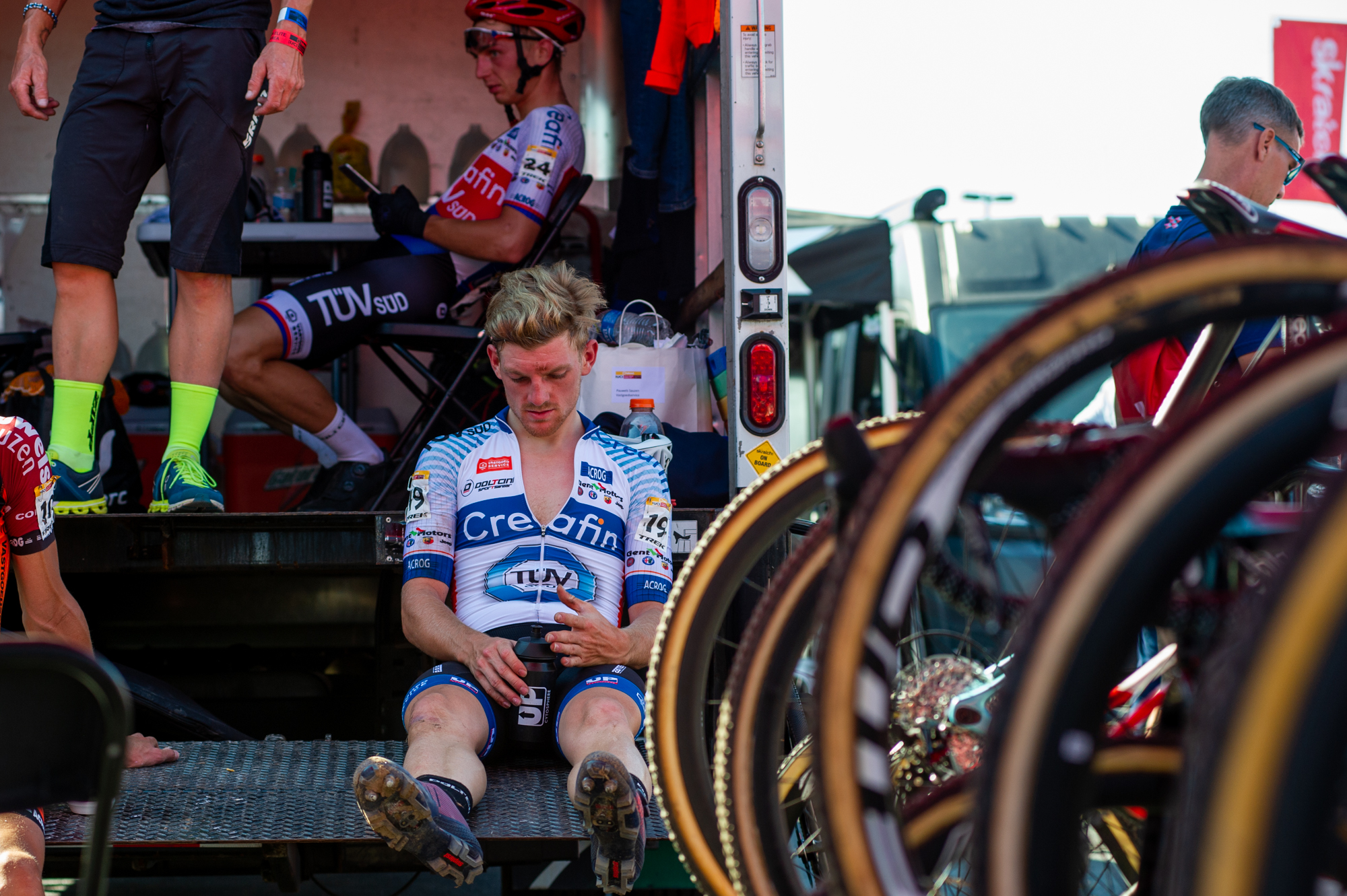 Michael Boroš and Sieben Wouters at the Creafin-Tüvsüd team box truck after the race. Between races I made another sweep through the teams area to try to get both the aftermath of the men’s race and preparations for the women. One of the things I love about these American World Cups is seeing the European riders operating out of box trucks, mini vans, etc. 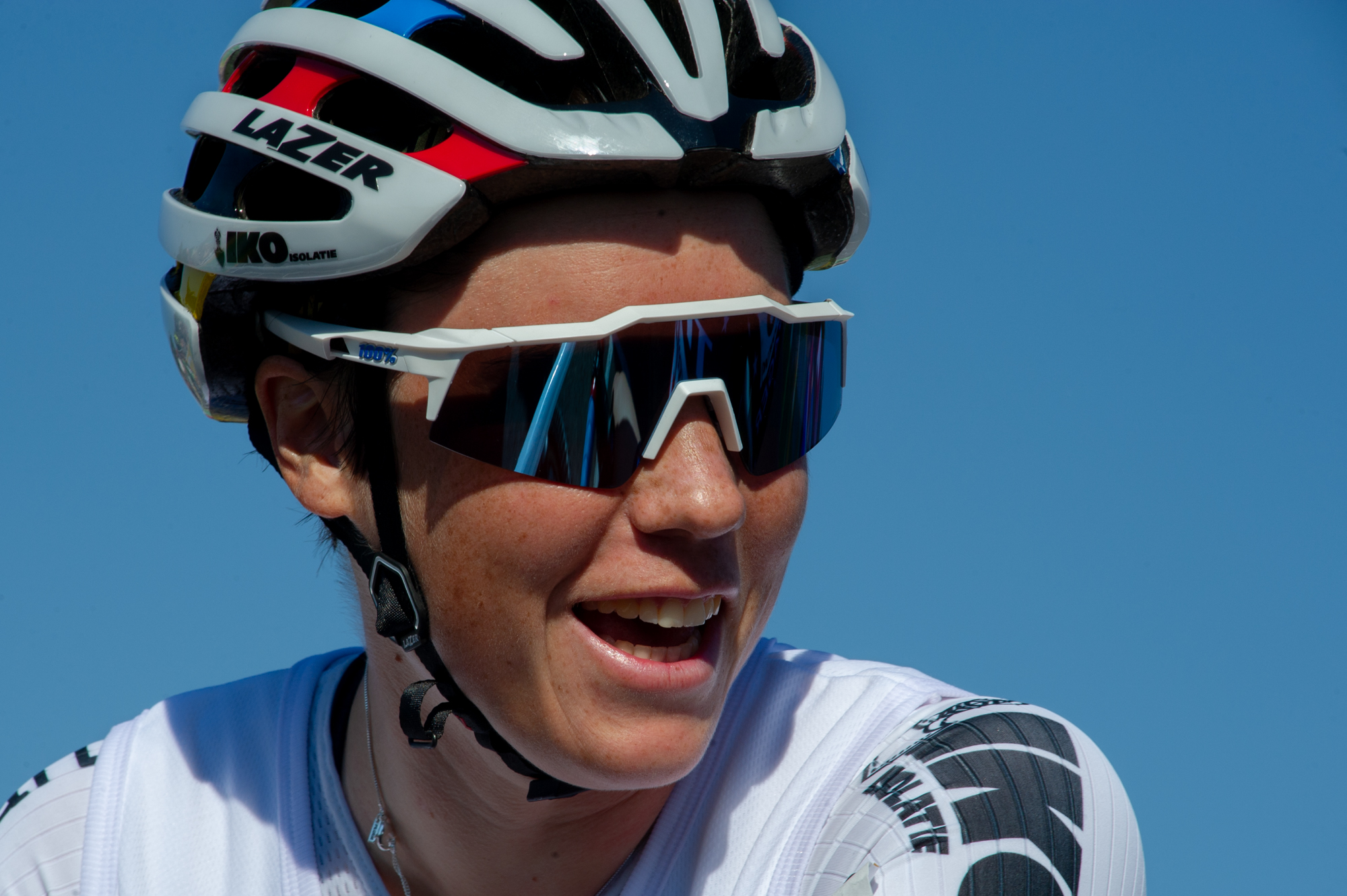 World champion Sanne Cant on the start line. Sometimes I will skip shooting the women’s start grid in order to get into position for the first lap but I was feeling pretty good about my plan for this race. 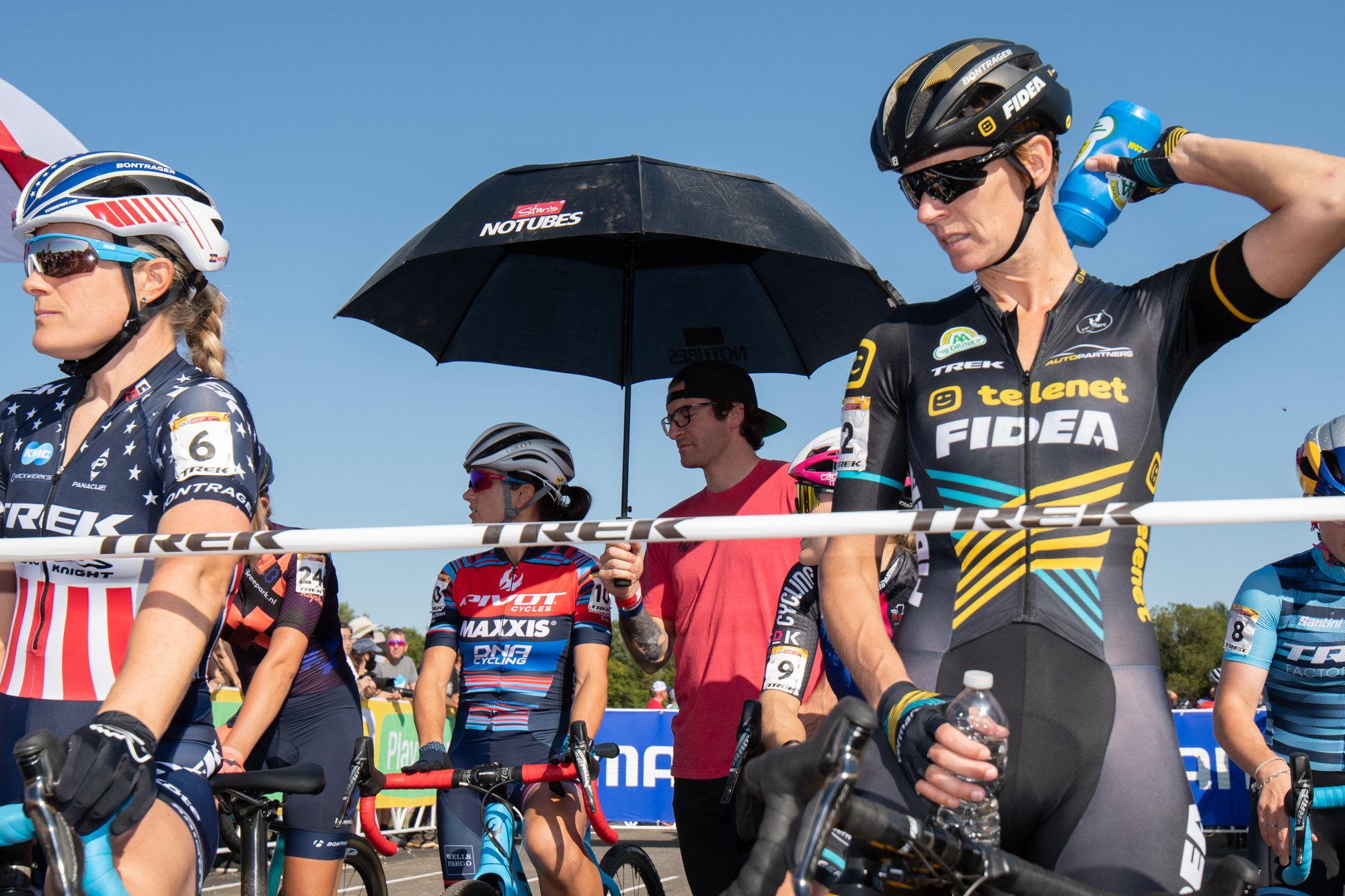 Katie Compton, Courtenay McFadden (with mechanic/soigneur Jérôme Alix holding the umbrella) and Ellen Van Loy on the start line. The scenes on the start line were quite similar to last year with cooling vests, and umbrellas out. Even with temps about 20 degrees cooler the bright sun was making an impact. 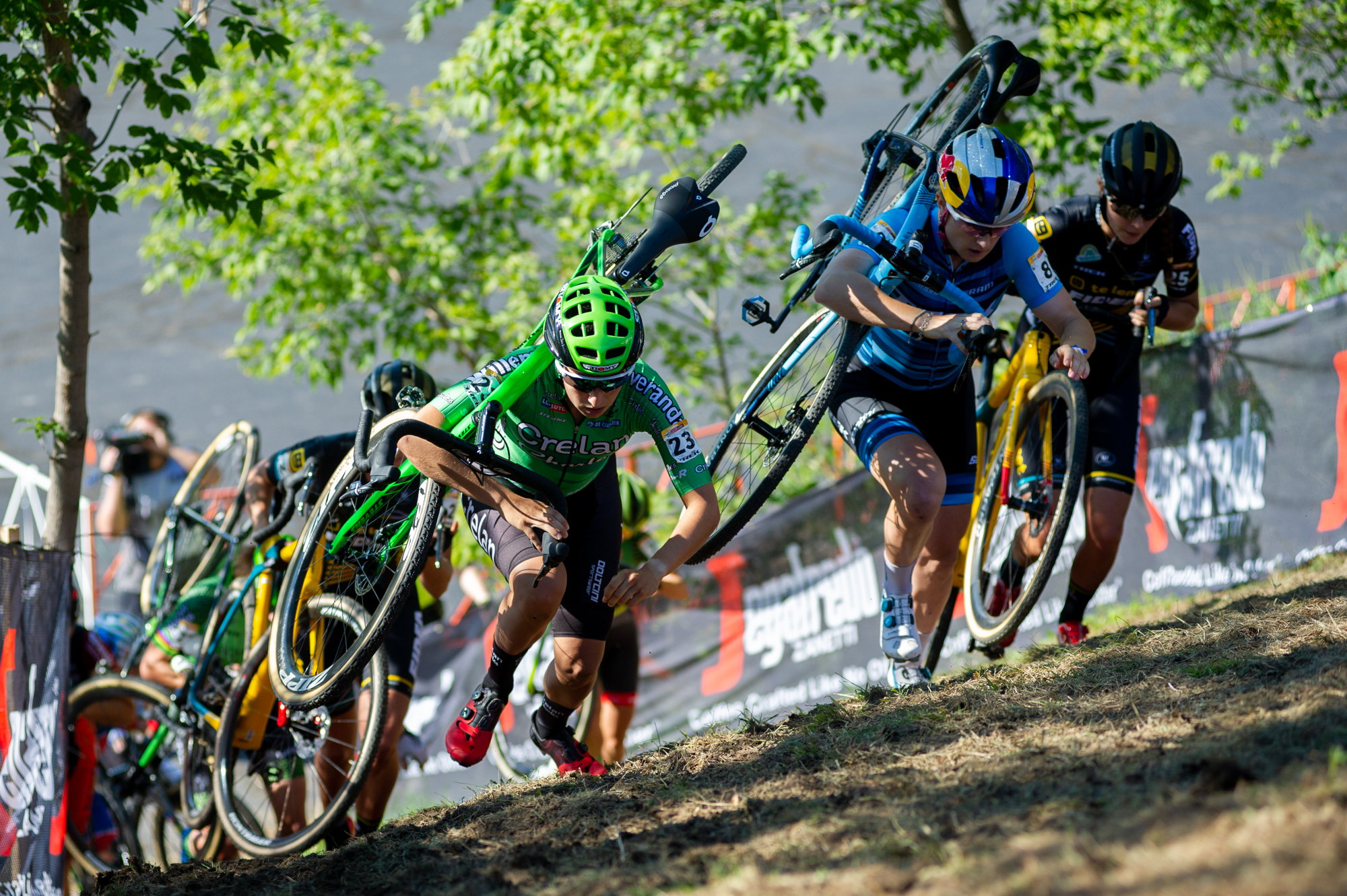 Maud Kaptheijns leads the pack on the steep run-up. This was actually the third spot I hit on the first lap. I shot the hole shot head on but from a bad angle because I hadn’t accounted for the extra banners on the fencing and the bigger crowds. I also shot at the big fly-over with fine but not great results. I liked this shot because I thought it really shows just how steep this section is. 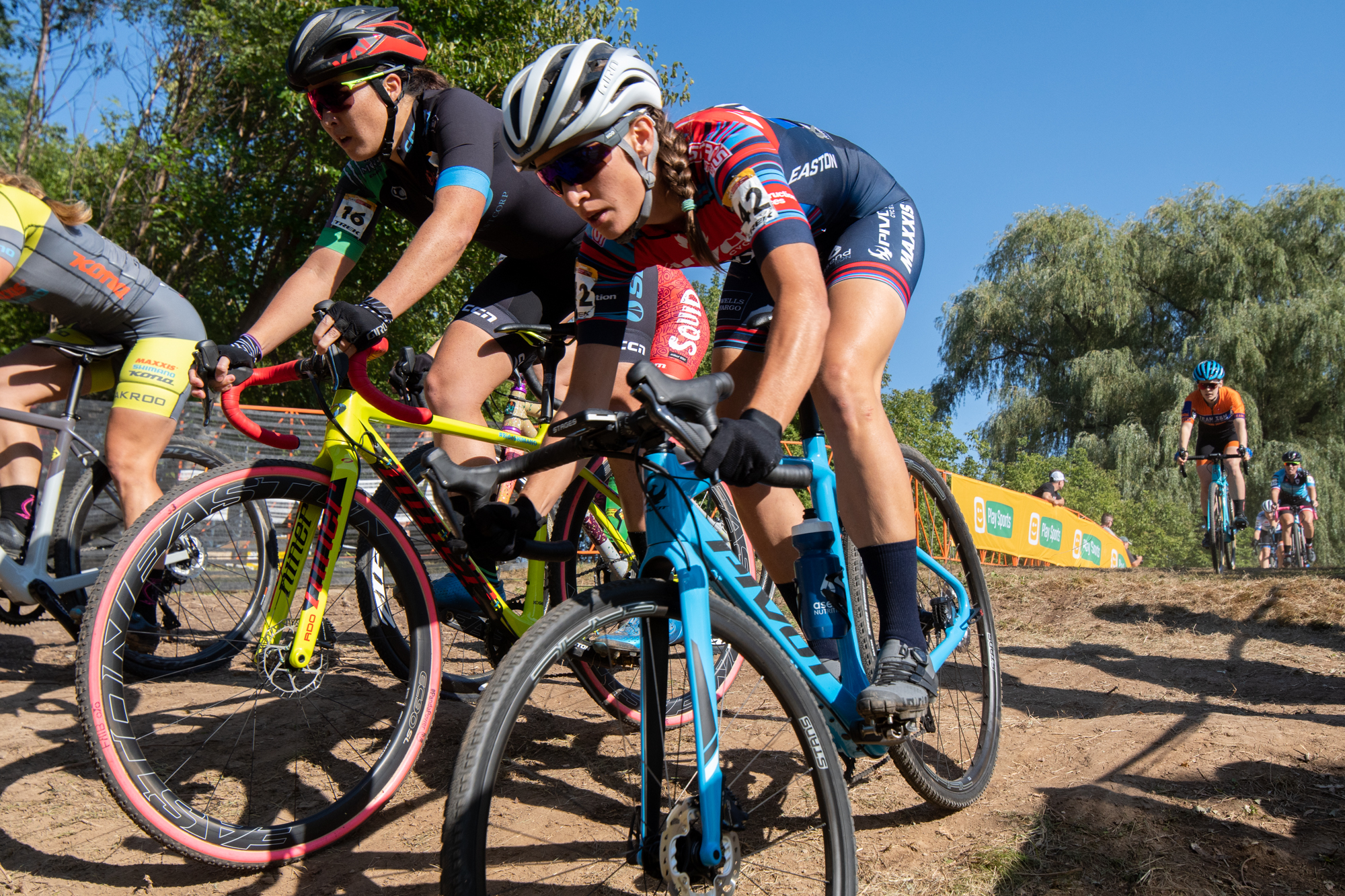 Amanda Nauman and Sofia Gomez-Villafane on the off-camber descent. Gomez-Villafane went on to finish 8th from a way-back start position and I swear she made up most of those spots flying down this descent. This was my fourth and final spot on this lap. 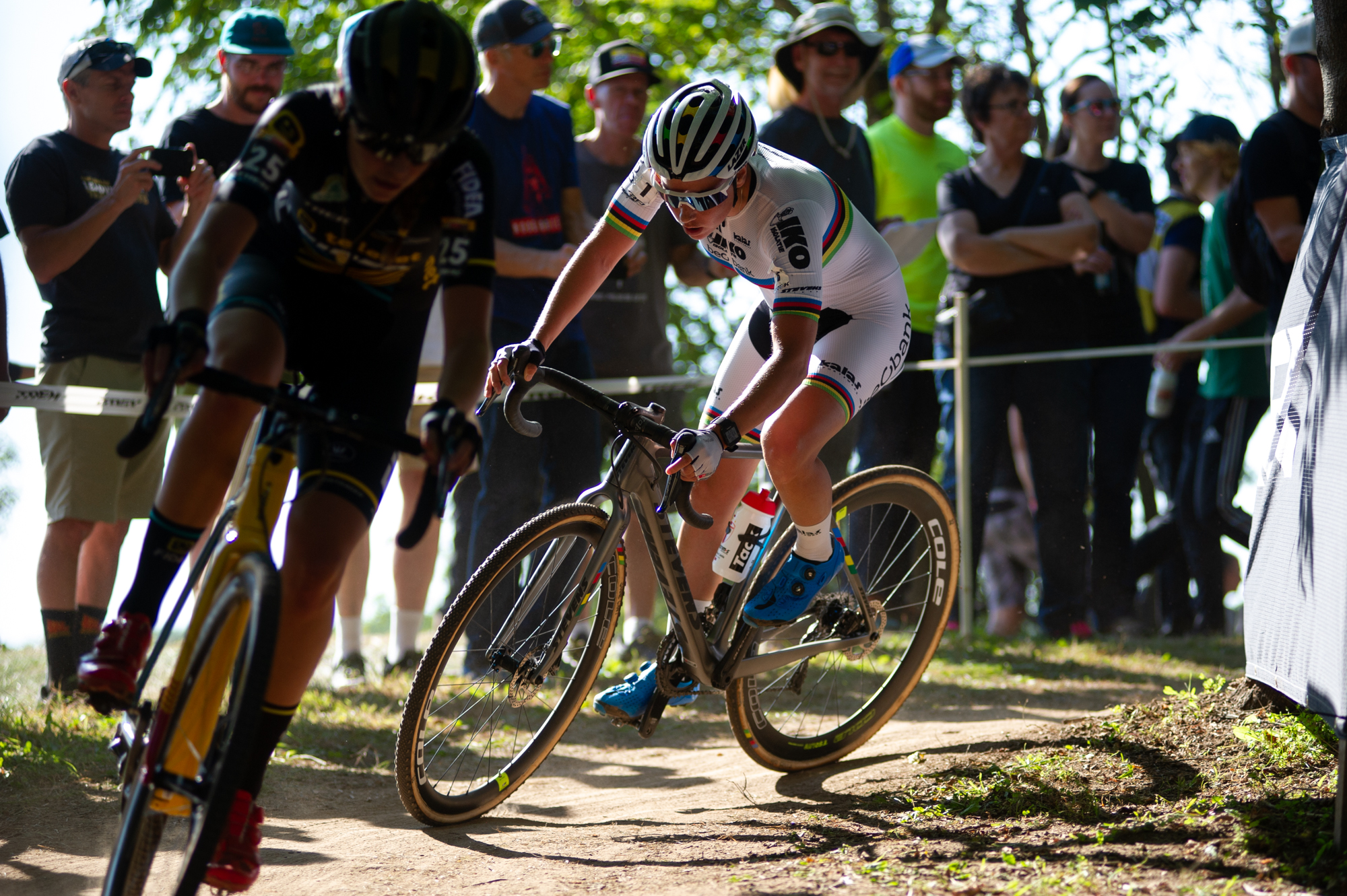 Fleur Nagengast leads Sanne Cant through a corner. There wasn’t a cloud in the sky all day which made for some challenging shooting. This area had lots of dappled light as the sun came through the trees. But if you took a minute to find the angles, and the timing worked out, the results were not bad. 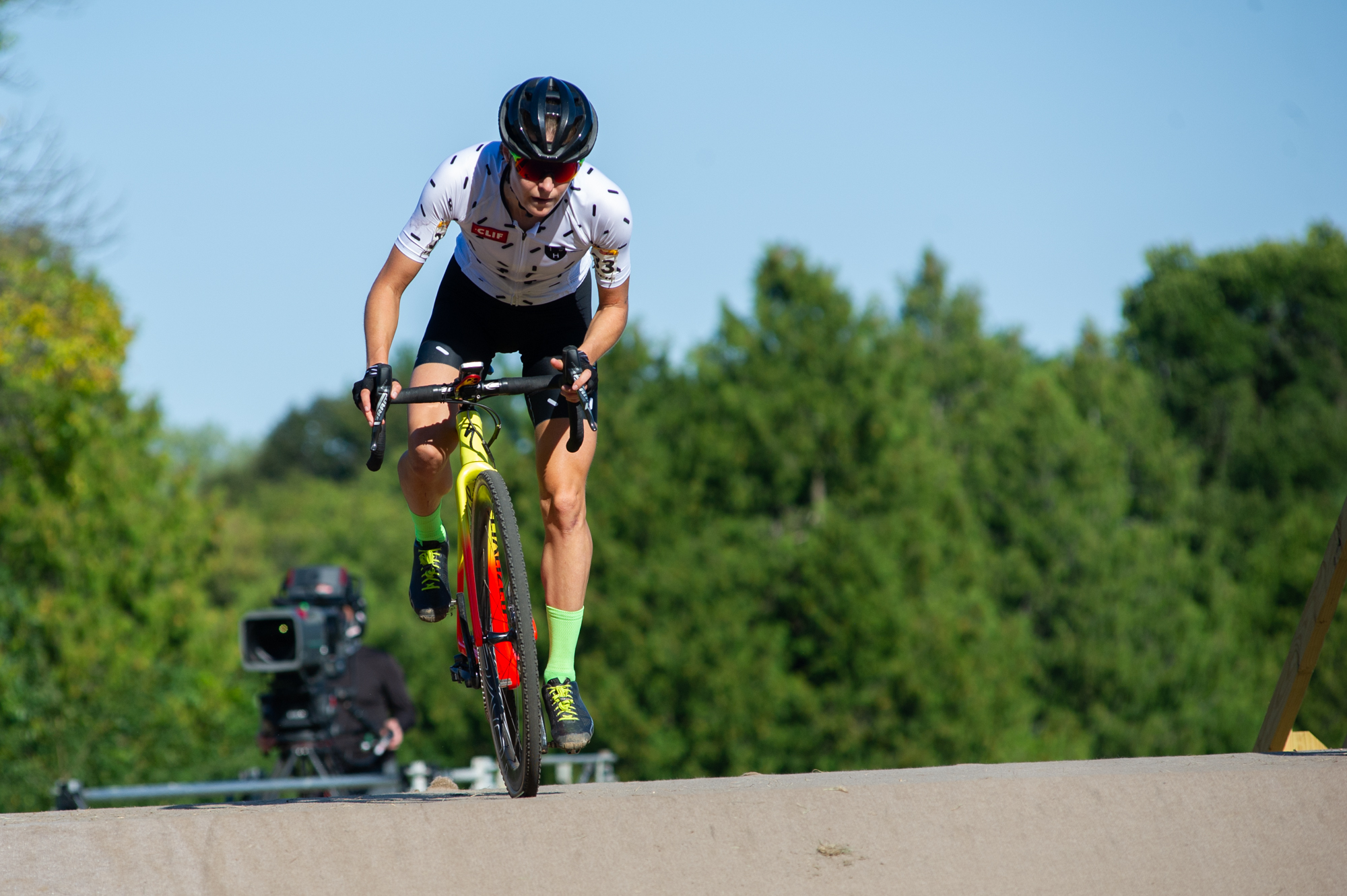 Maghalie Rochette crests the back side fly-over. In addition to this course being a challenge to get around, it seemed to have fewer spots where I could get two different angles. This one was ok. I was able to get riders coming over the fly-over and also, as in the next shot, riding away from me up a long straight. 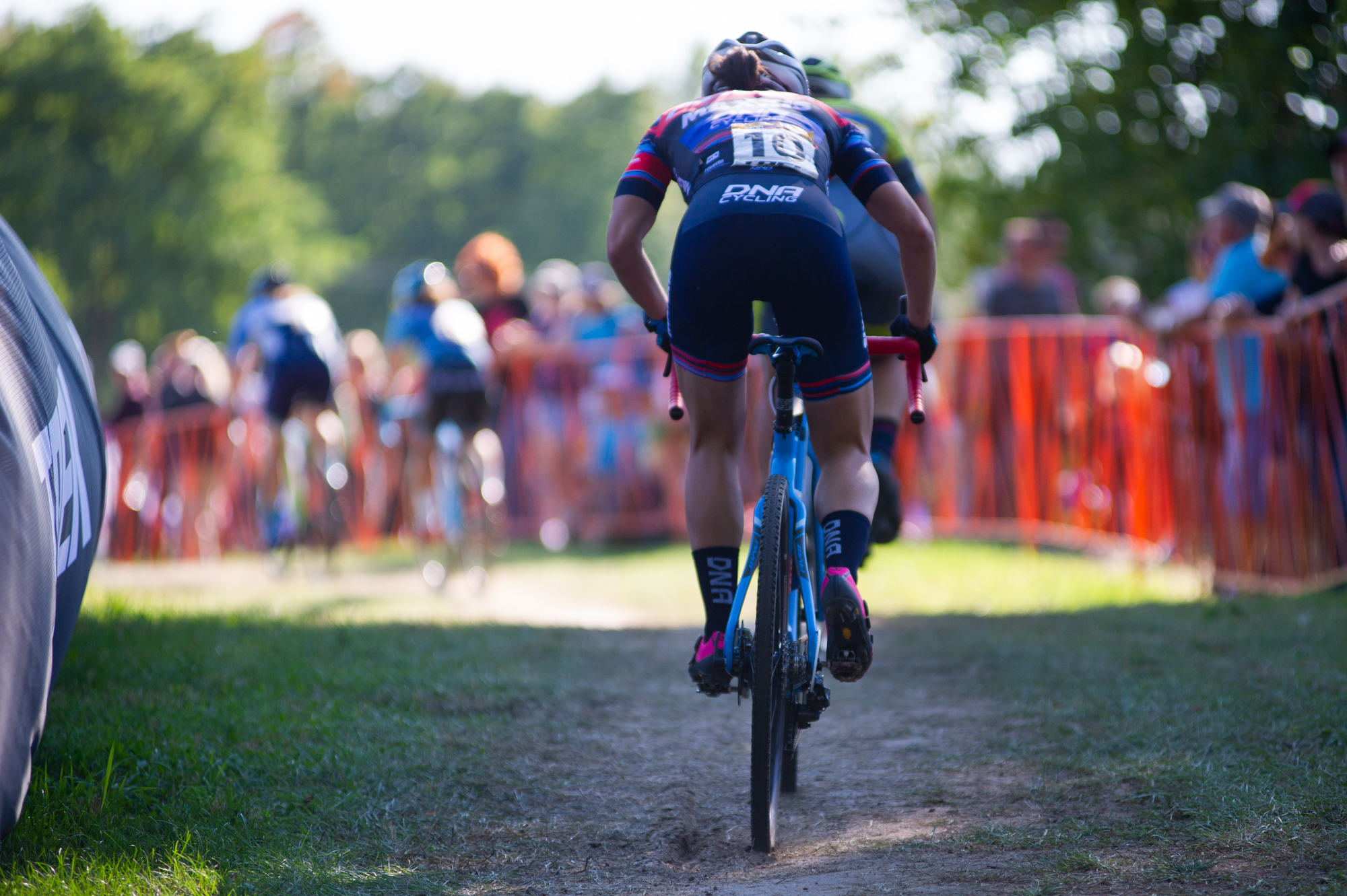 Courtenay McFadden chases Rebecca Fahringer on a straightaway. McFadden had a very tough outing and finished well below where she wanted to be. She is coming off recovery from hip surgery and also a very recent mountain bike crash. She was obviously in significant pain. That she was able to power through and finish was pretty amazing. 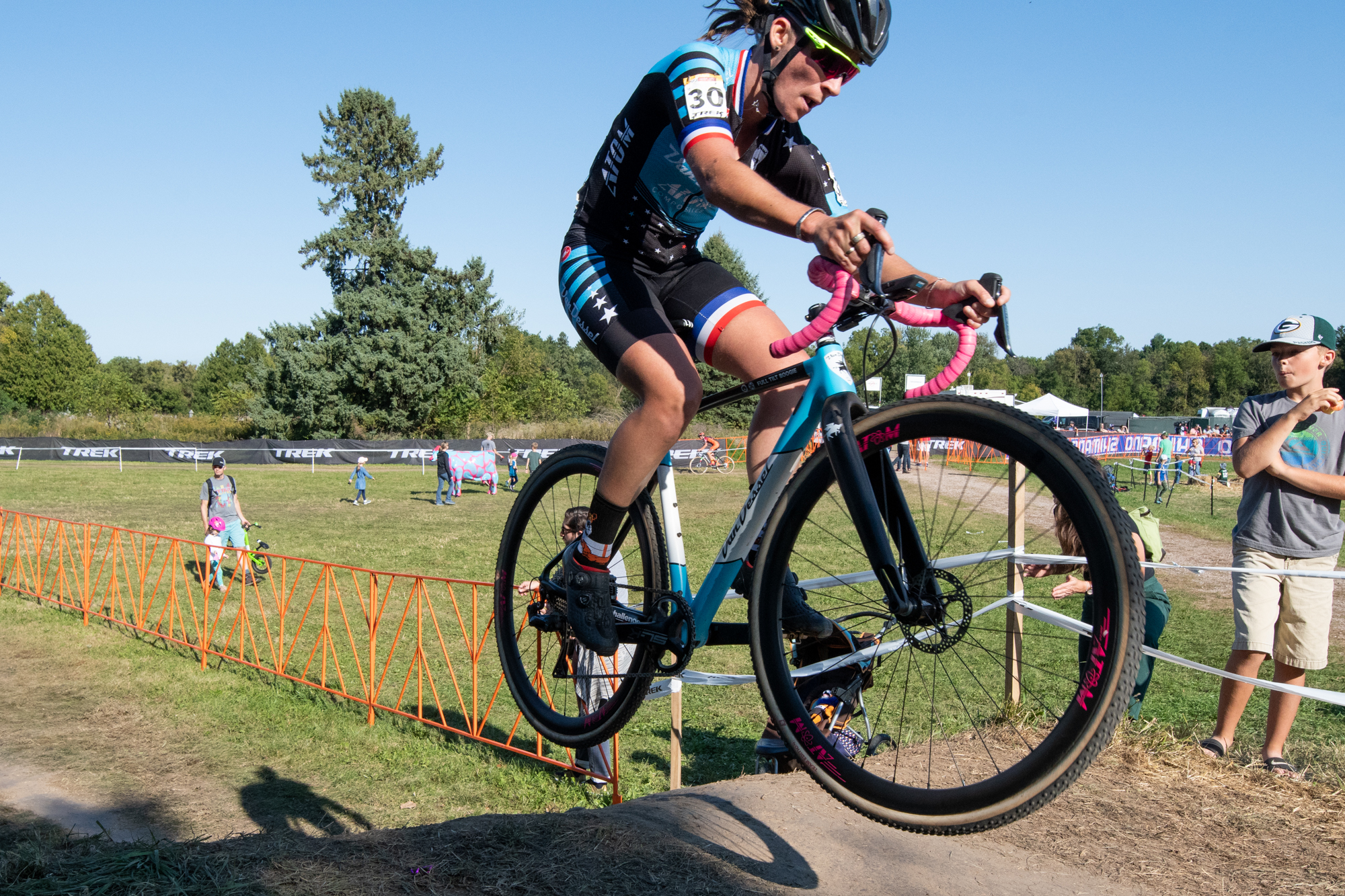 Caroline Mani launches over the tabletop. Finally somebody gets some air! Of course by now I had abandoned my low angle assuming that nobody would. As I was shooting in this spot I could hear the crowd reaction to Ellen Noble’s crash on the barriers which were only about 50 meters behind me. 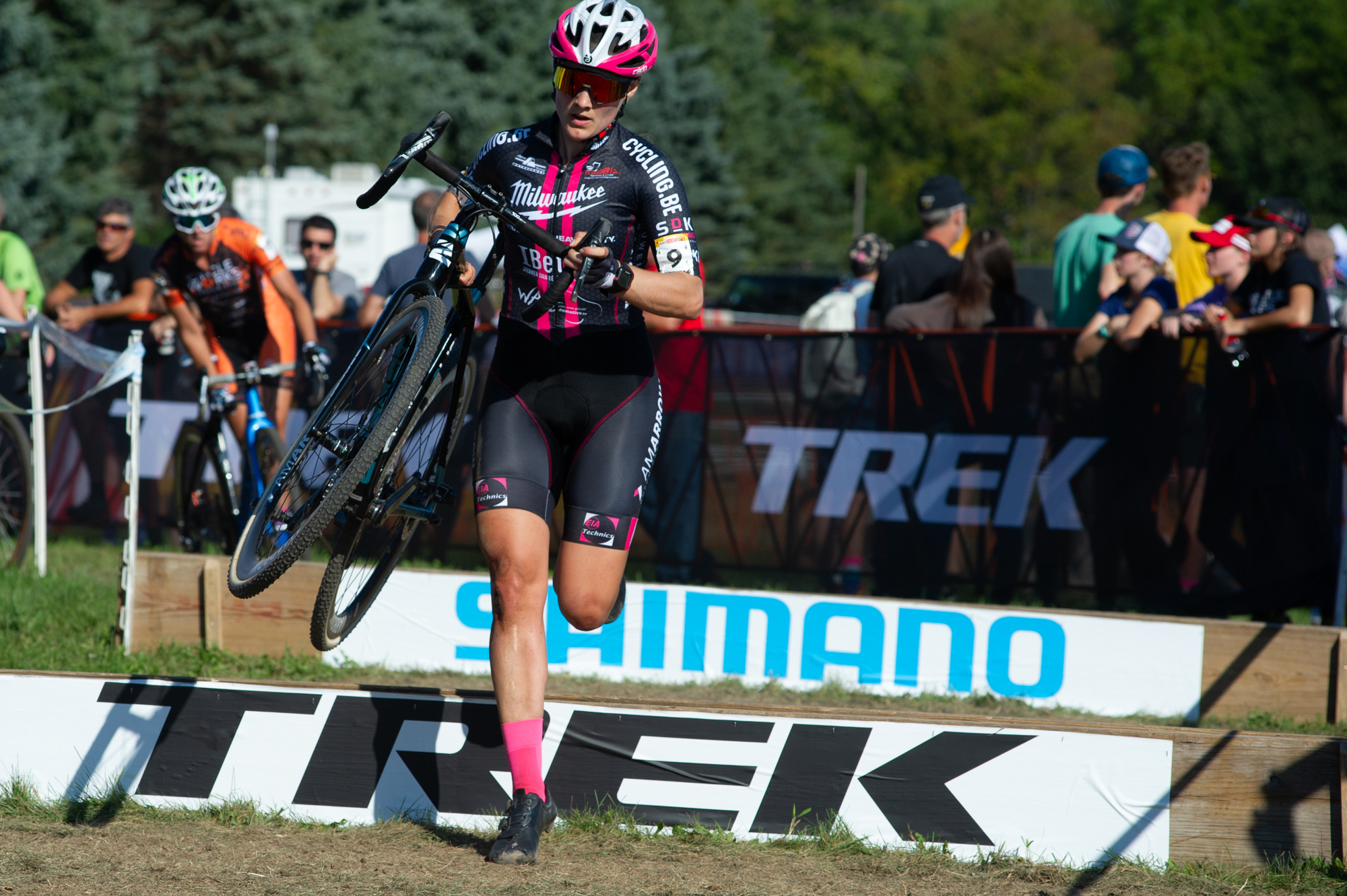 Elle Anderson runs through the barriers. Same lap as the tabletop but by now I’ve missed the key moment at this section. Still, there’s lots of time left in this race and I have plenty shots in the bag. This is when my stress levels are usually highest. On this day it was when I appreciated the switching of the race times the most. 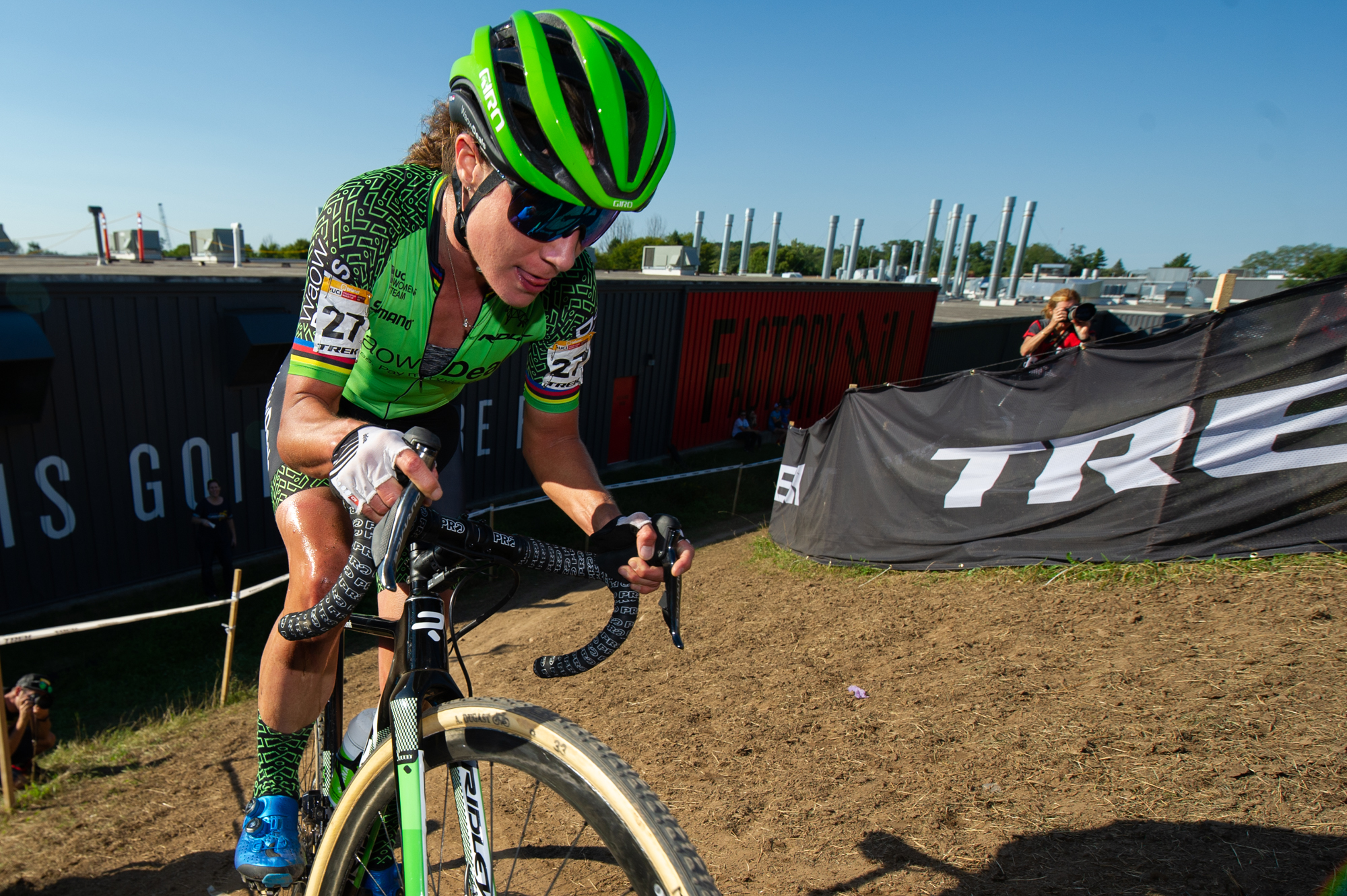 Marianne Vos climbs Factory Hill. Vos was still stalking Ellen Noble at this point. And before you leave a comment I just want to say that no part of my body or camera was sticking out onto the course. Or wouldn’t have been if I hadn’t pulled the course tape out of the shot. 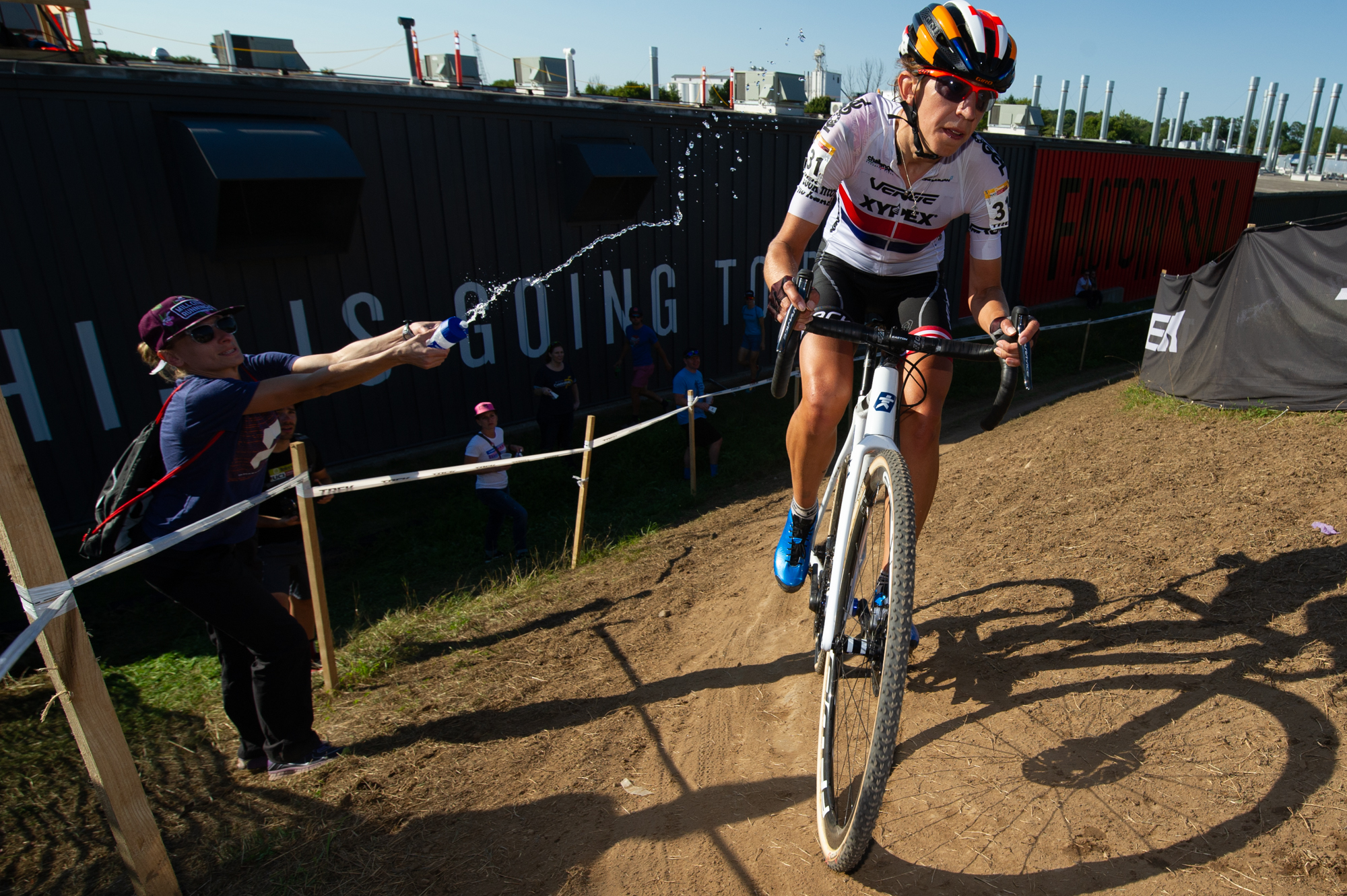 Helen Wyman on Factory Hill. This is with one-and-a-bit to go. I actually had enough time on these last few laps to think about how I was going to handle the finish. I wanted to try again to get a different angle but I also needed to capture the immediate aftermath of the race just past the finish line. 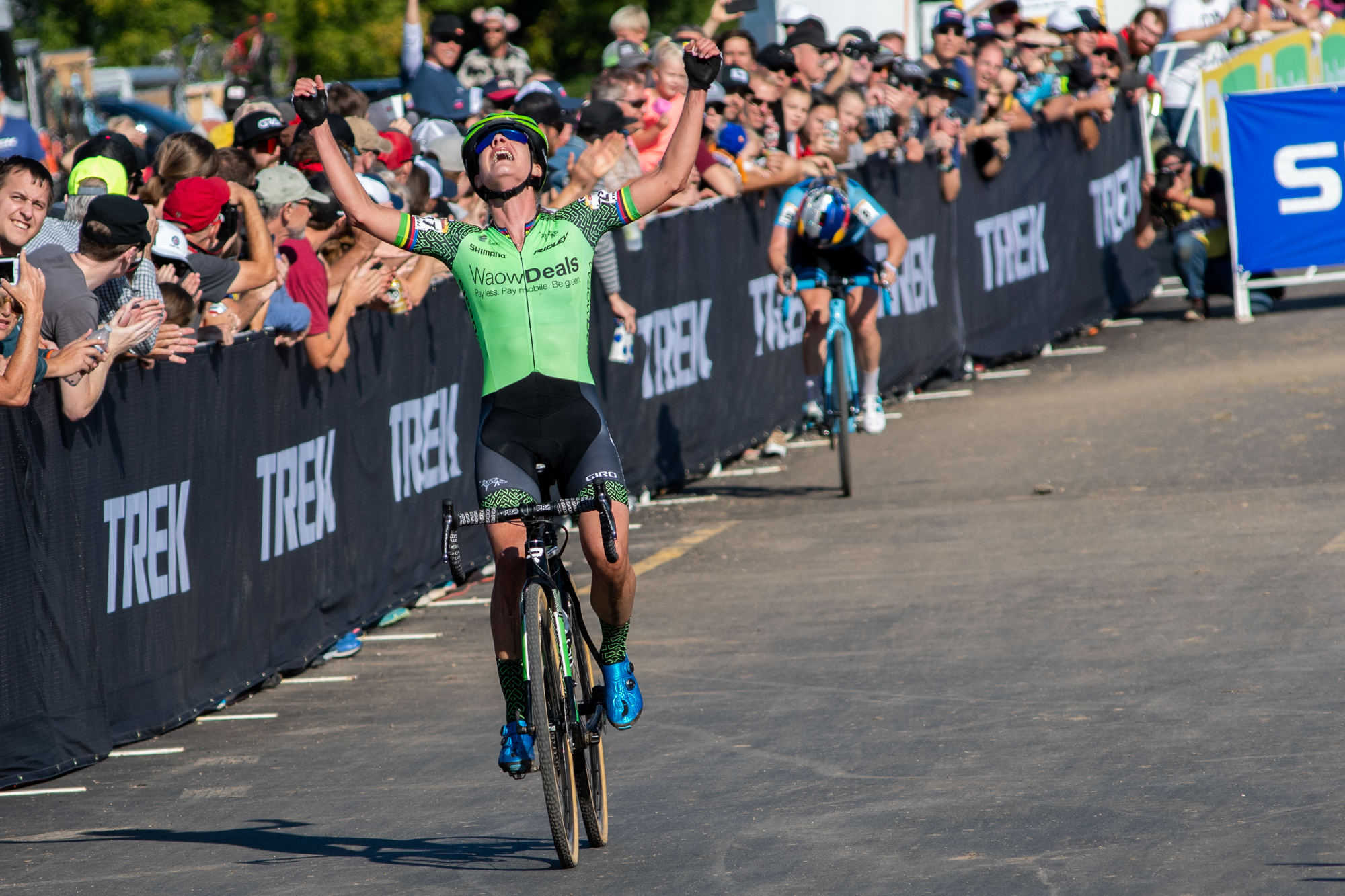 Marianne Vos wins. In retrospect I’m not disappointed that I had to go with a traditional head-on, post-up shot. Vos’s finish line celebrations are always great and full of real emotion. Pretty cool considering how many times she has won. 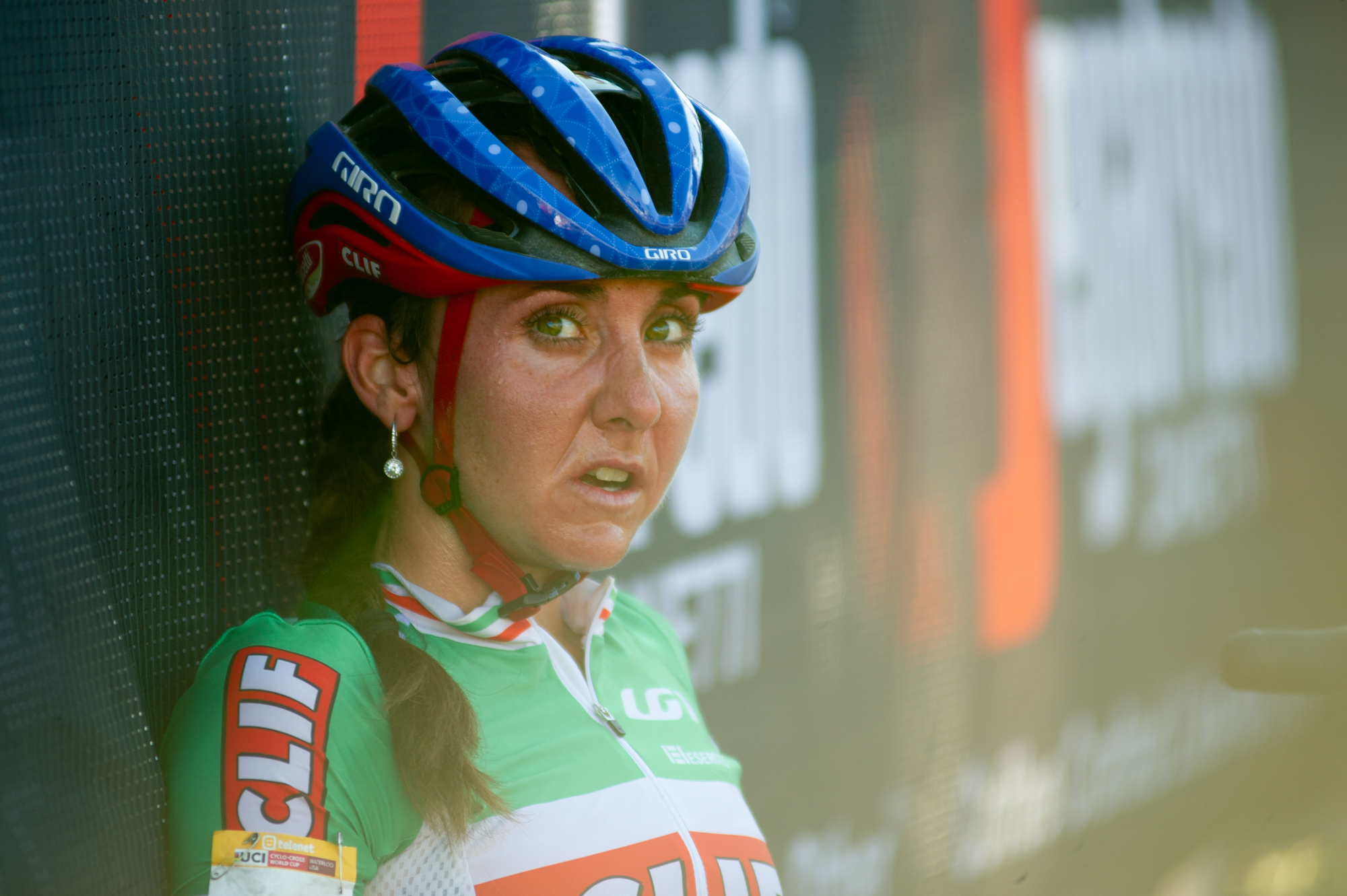 Eva Lechner after the finish. I didn’t have shots like this from after the men’s race so I had to be sure to get them now. Just as at the start, it was really striking how similar the scene was to last year given the temperature difference. Lots of riders looking overheated and just absolutely drained.